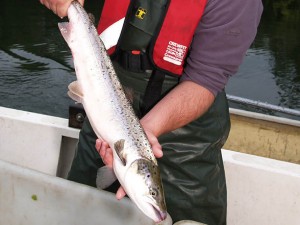 News just in from the far side of the world, where the Wandle’s slightly bigger sister went up against global competition for the Thiess International Riverprize… and won!

From the Environment Agency’s (justly proud yet cautionary) press release:

“The Thames scooped the prize thanks to its dramatic recovery from a biologically dead river in the 1950’s to today’s thriving waterway; teeming with fish, and with returning salmon, otter and sea trout populations…

Since April 2005, 393 habitat enhancement projects have been completed and nearly 70 km of river has been restored or enhanced.

In the last 150 years the Thames has been to hell and back, and it has taken thousands of people many decades to restore it to this point.  Tighter regulation of polluting industries and our work with farmers, businesses and water companies to reduce pollution and improve water quality, have all helped to make the Thames a living river once again.

But the recovery is fragile, and under increasing pressure from a growing population, ageing infrastructure and climate change. Through innovative projects such as the Thames Tideway tunnels and the London Rivers Action Plan, we and all of the people and organisations we work with are proving that we are tackling these challenges head on to ensure that the Thames remains an iconic river for many centuries to come.”

The trophy was collected on behalf of the Environment Agency by Rob Oates, Director of the Thames Rivers Restoration Trust – and the prize will provide an extra £218,000 to invest in the river’s sustainable future and a twinning project in the developing world.

Congratulations to everyone involved!

1 thought on ““And the winner of the world’s biggest river restoration award is… the Thames!””