Having reported in February’s cleanup blogpost that a silver cup had been found in the Wandle near Plough Lane road bridge, we set about returning it to its rightful owners!

After carrying out a bit of detective work, Theo made contact with David Growns, Vice Chair of the Dons Trust, the not-for-profit organisation which owns AFC Wimbledon.  David was delighted to hear we’d found the cup, and arranged for me and John O’Brien (Trout in the Classroom volunteer, Wandle Piscator and season ticket holder of AFC Wimbledon) to visit their home ground and officially hand back the cup. 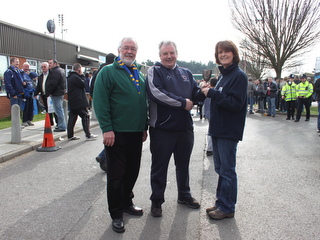 So, on a breezy Saturday afternoon when AFC Wimbledon were holding a home game at Kingsmeadow football stadium, John and I went to meet David for our formal re-presentation of the trophy.

Since the cup is inscribed Wimbledon Football Club Snooker Handicap Cup – presented by the Mayor of Wimbledon, Councillor CW Black, JP, 1947, David had already been able to do some detective work of his own with Cyril Black’s grandsons, who were club supporters and who were in the crowd that day!

We were lucky enough to be taken onto the pitch before the game, where club photographer Zoe took more photographs of us handing back the cup: 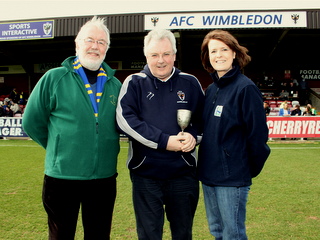 John stayed for the match in which AFC Wimbledon beat Dagenham and Redbridge 2 – 1.  And David sent through a couple of quick shots of the slightly battered cup in its new home alongside all the other (very shiny) club memorabilia: 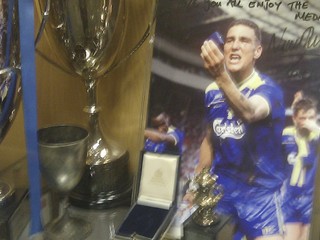 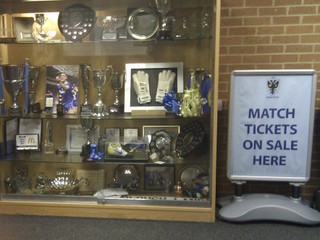 Meanwhile, AFC Wimbledon’s volunteers are combing the local library archives to find out more about the history of the trophy, and how it found its way into the Wandle… watch this space!

(All photos: thanks to AFC Wimbledon)

2 thoughts on “AFC Wimbledon’s silver cup: what happened next?”