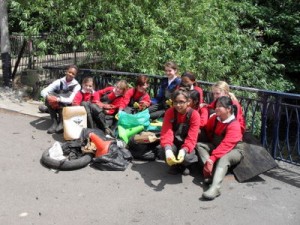 At the beginning of June, the Year 7 girls of Burntwood School in Wandsworth were looking for a local environmental project – their Green SOS – to feature in a 3 – 5 minute DVD entry to a national competition for ‘Green-agers’ run by npower.  The girls involved unanimously decided that they wanted to highlight the challenges facing their local river and to do something to make a positive difference.  So, following a telephone call from teacher Sarah Brack, ten of the girls joined volunteers, Gideon, Diana and myself to help pull up Himalayan balsam from the banks of the Wandle at Trewint Street.

Having been fully briefed on the risks of working near water, they participated in a mini-workshop on the identification of invasive species and the reasons behind removing them. Then they donned waders and gloves and clambered over the railings onto the bank to begin work.  As well as filling a dozen or more bin bags with the remains of this ‘pesky’ plant, they were amused to find a tyre, several items of clothing and a mysterious bundle wrapped in a plastic bag, which revealed, on closer inspection, what they thought was some silver cutlery.  Having discussed putting it on a well-known auction site and making their fortunes, their teacher confirmed that it was only stainless steel and consigned it to the rubbish pile!

The girls will find out by 10th July whether their school project has been selected.  The winners will receive a £20,000 green fund which will be put towards the implementation of energy saving measures detailed in their school’s energy audit.  Fingers crossed!