When the government Department of Communities and Local Government (CLG) asked us to arrange them a volunteer event that didn’t involve pulling rubbish from the river, it gave us the opportunity to set up another pulling activity for volunteers: removing Himalayan balsam!

This non-native invasive plant species was brought to Britain from the Himalayan region in the early 19th century as an ornamental garden plant but, not being part of the natural ecosystem, it had no predators and started to spread unchecked. 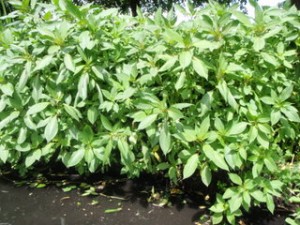 It loves to grow on disturbed ground such as river banks and quickly shades out our native flora, resulting in a monoculture, which dies back in winter, leaving banks bare so that soil gets washed into the river in rainwater, suffocating spawning gravels and invertebrate habitat with silt.

In short, the only way to get rid of Himalayan balsam is to pull it up repeatedly before it has flowered. And to do this over such a wide area needs people power.

So, during the UK’s national Volunteers Week (1st to 7th June) we arranged a day of pulling for the CLG which was a great success – not least because we were once again fuelled by Jo’s delicious home made delights.

Our volunteers managed to meticulously remove all the Himalayan balsam we could find from around 100m of river bank in Beddington Park. 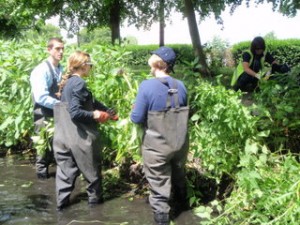 We even managed to be filmed by BBC London who were reporting on the wildlife improvements being made to the river – although we unfortunately got bumped from being broadcast that evening by Mayor Boris falling into Lewisham’s River Pool whilst also pulling HB (taking Debbie Leach of Thames 21 with him, though luckily she’s also a top class oarswoman, so a little river water didn’t bother her!)  So the piece eventually went out yesterday evening instead. 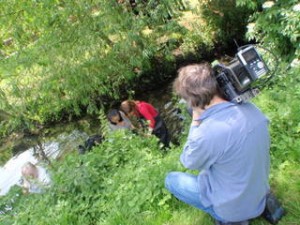 We’d like to thank Carl and all his CLG colleagues who did such a great job kick-starting our invasives removal programme, whilst getting to know the Wandle (and each other!) better at the same time. 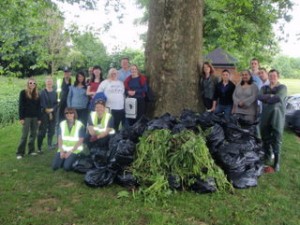 And we’re also very grateful to Sandra and her team at Sutton Council who took our pulled-up Himalayan balsam to the borough’s composter where it will be turned into useful fertiliser to encourage native plants to grow.

If you’d like to talk to us about organising an environmental team-building or corporate event for your organisation on the Wandle, why not get in touch?