One of the Wandle Trust’s big river restoration projects, funded by DEFRA’s Catchment Restoration Fund, started recently at Hackbridge.  However, physical improvements couldn’t begin until the Himalayan balsam was brought under control. 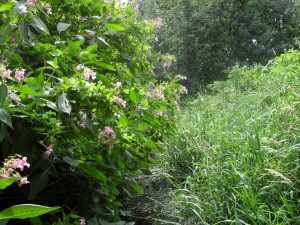 So we decided to run an extra balsam bashing event and, on a sunny but thankfully much cooler day, 31 volunteers turned up at Culvers Avenue to help. 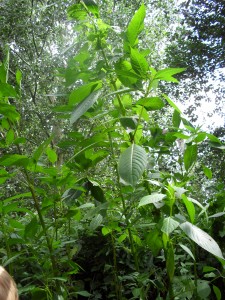 Before we got started, a local resident from Buckhurst Avenue stopped by and told us that he’d had his motorbike stolen the previous Thursday morning.  The police had called him with good news and bad news:  the good news was that they’d found his motorbike, the bad news was that it was in the Wandle at Shepley Mill!  The police also told him that we were in the vicinity on Sunday, and suggested he came and asked whether some of our chaps could help him.  We put our visitor into some waders and despatched him along with ropes, grapples and some of our big, strong boys to Restmor Way.  Needless to say he was very impressed when, in a matter of minutes, they had secured the bike and hauled it out of the water!  It’s the first time in cleanup history that we have reunited a motorbike with its owner. 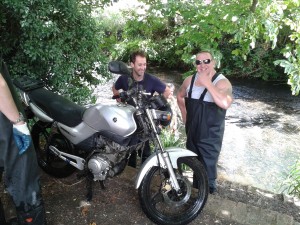 Meanwhile other volunteers had walked up to Dale Park to start the balsam bashing.  As some of the plants had started to flower, to stop any seeds potentially dispersing we decided that we would cut the flowers off and bag them separately, after which pulled up stems could be safely left on the banks to compost down.  The patch in Dale Park was cleared very quickly, so we walked back to Gazebo HQ and, as it was quarter to one, we decided to have an early refreshment break. 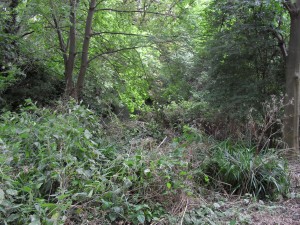 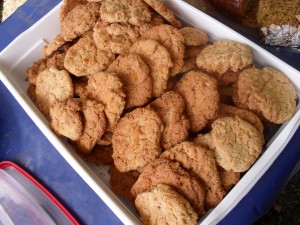 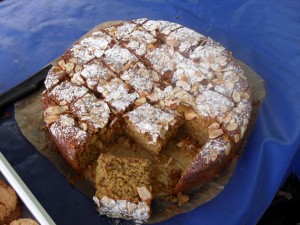 Eager to get on with the task after lunch, we waded across to the island, and with arms aloft to avoid the stingers we began to remove the balsam there. 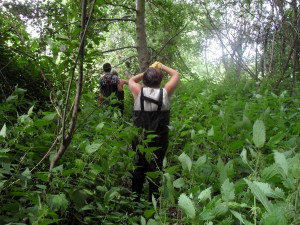 Claire took a small group downstream of the confluence to tackle an isolated stand before both groups got together to wade upstream to tackle huge plants with giant roots. 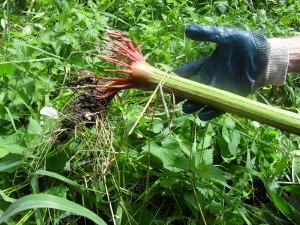 Even though this was strictly a balsam bashing event, there was still lots of rubbish in the water, which our volunteers found very hard to leave, so whilst the majority of volunteers were on the island, the small group who’d helped with the motorbike got to grips with it, whilst Rose and Wally did some much needed litter picking on the banks.

We were joined for the last hour or so by local artist Hana Horack. Clad in waders and with a camcorder in one hand, she came to film some of us for her exhibition entitled ‘Imagine a life without water’ which takes place at the Honeywood Museum in September. 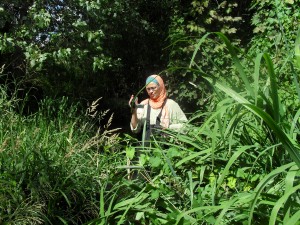 As we made our way upstream, chatting amicably, we noticed water crowfoot, starwort and water parsnip in the water, and daring little damselflies swooped and fluttered around us as we worked. 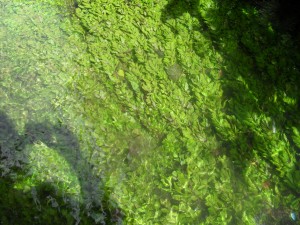 Before we left, we separated the rubbish from the bin bags full of flower heads, and set off for home satisfied that we had carried out an excellent day’s work.  Our thanks go to David and Bill from Sutton Council for the disposal of the rubbish and the balsam. 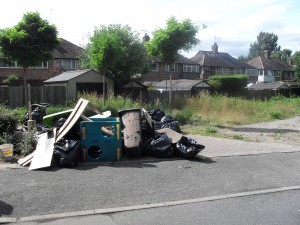 This event was supported by DEFRA’s Catchment Restoration Fund