After months of planning and preparation the weir removal and river restoration project at Hackbridge is finally underway!

Those of you who have crossed the road bridge over the river or walked along the Wandle Trail in the past few weeks will have seen big changes with heavy machinery in the river, the sound of breaking concrete and the sight of a river re-emerging.

Our skilled contractors Cain Bioengineering with site manager Nick and his team of Alex and Jimmy have been working hard to bring to reality our vision for the river. 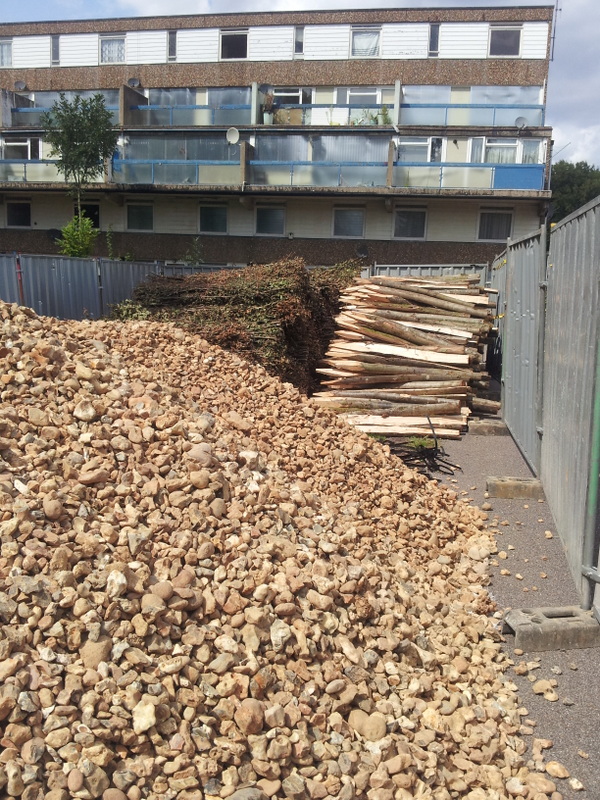 Gravel, stakes and hazel faggot bundles at the ready in the compound:

The work started with the removal of the heavily creosoted toeboarding from around the edge of the island. 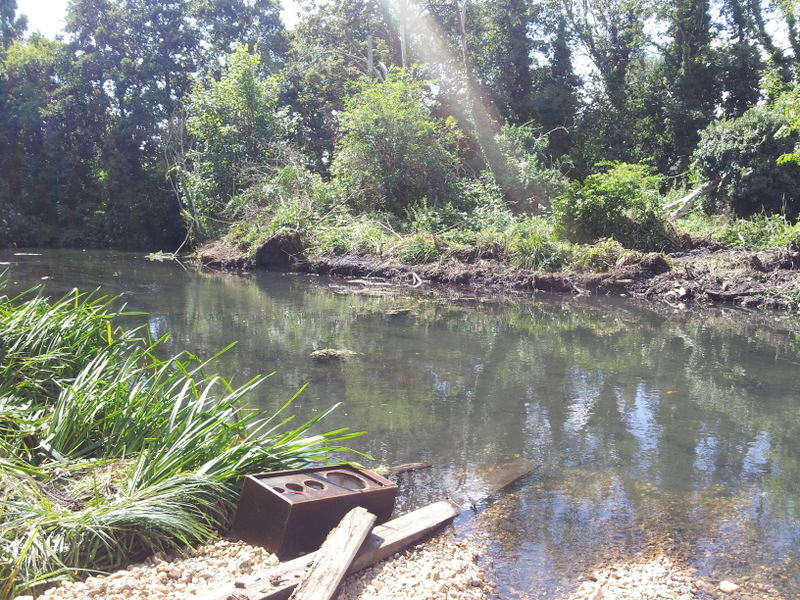 Toeboarding removed from the island and an old speaker found in the river!: 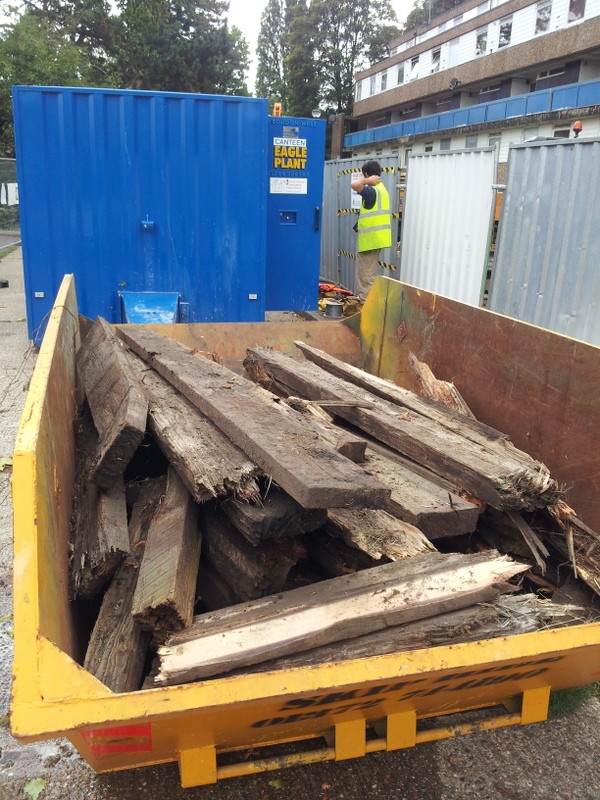 The toeboarding still smelt strongly of creosote after many years in the riverbank:

A new island bank line was then created with hazel faggot bundles secured with chestnut stakes and backed with coir netting in order to extend the island and narrow the river.  Sediment from the channel (of which there was a lot!) was then placed behind the new bank line.  This sediment is a result of the weirs slowing the water flow and causing sediment particles to settle out and smother the natural gravel bed.

Scraping sediment to place behind the new bank line:

After the creation of a new bank line parts of the island were regraded to create a gradually sloped bank that will be planted up at a later date with plants suitable for the different habitat zones created. The dead trees were retained as they are an important habitat for all sorts of creatures including bats, woodpeckers and invertebrates. 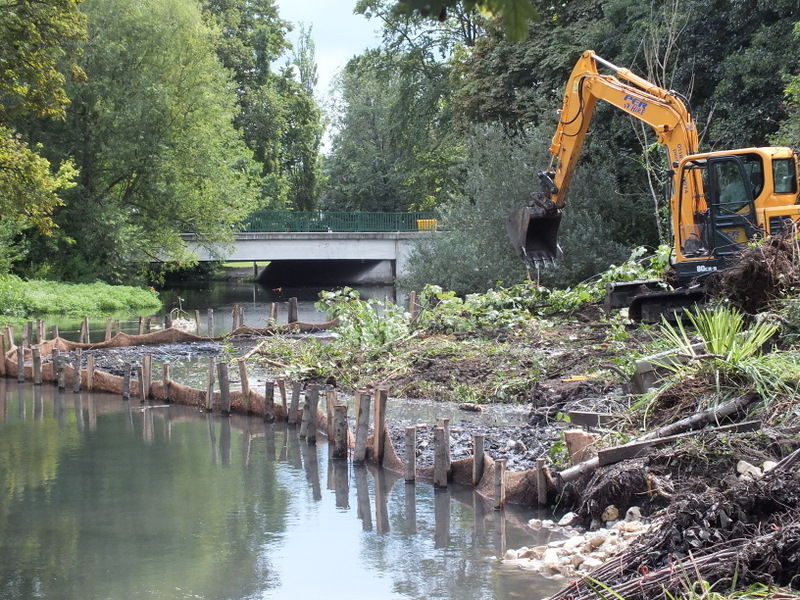 Regrading the island with the excavator:

With the bed nearest the weir cleared of much of the sediment the weirs were breached and the process of breaking up the old weir structures begun.  The weir was found to be made up of cast iron plates, concrete, brick and lumps of chalk.  The cast iron was recycled and the proceeds will be converted into a pair of waders for our volunteer events! 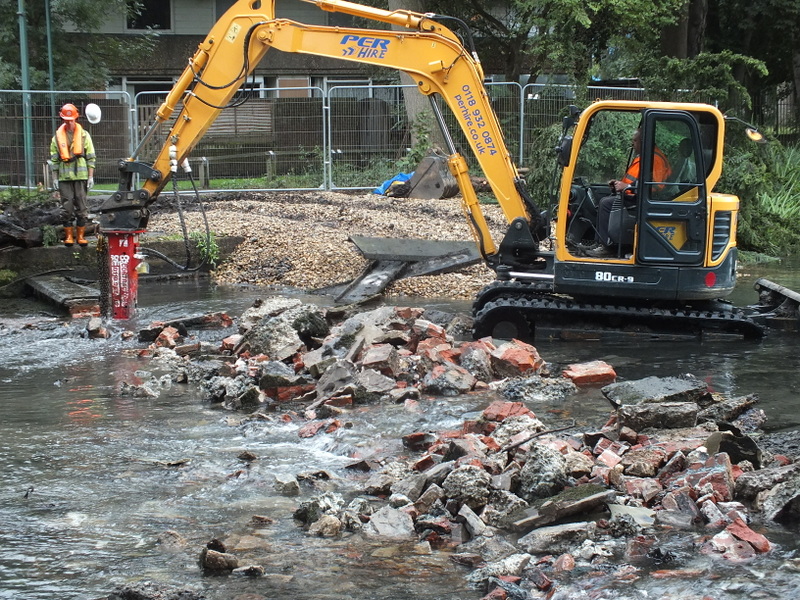 Smashing up the old weir:

Once the weirs were breached the water levels dropped upstream and the process of narrowing the channel was started with a combination of more posts and faggot bundles or stone. 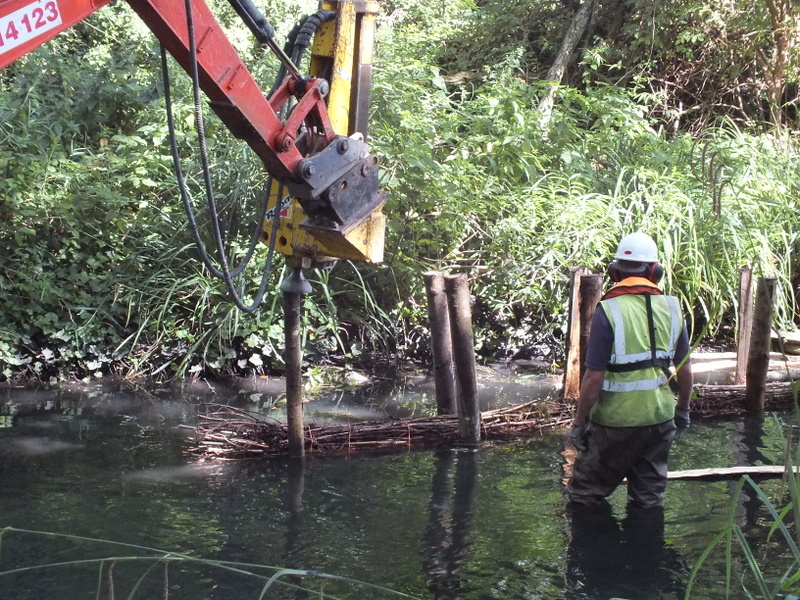 Forming a new bank line to narrow the river:

A sinuous meandering channel is starting to take shape and will allow for a variety of depths and flows with deeper faster flowing outside bends and shallower slower flowing inside bends providing varied habitats. 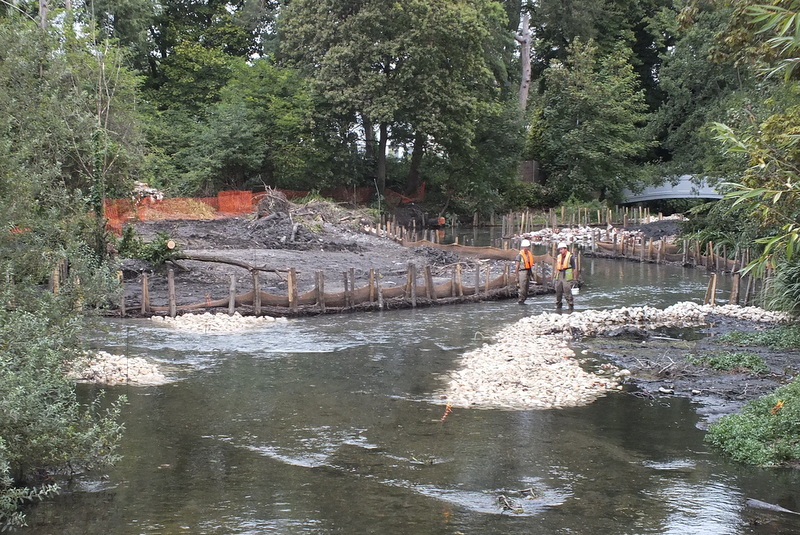 There have been many practical challenges along the way with sewer pipes, water mains and electricity cables criss crossing the river to be identified and avoided.  The joys of urban river restoration projects! 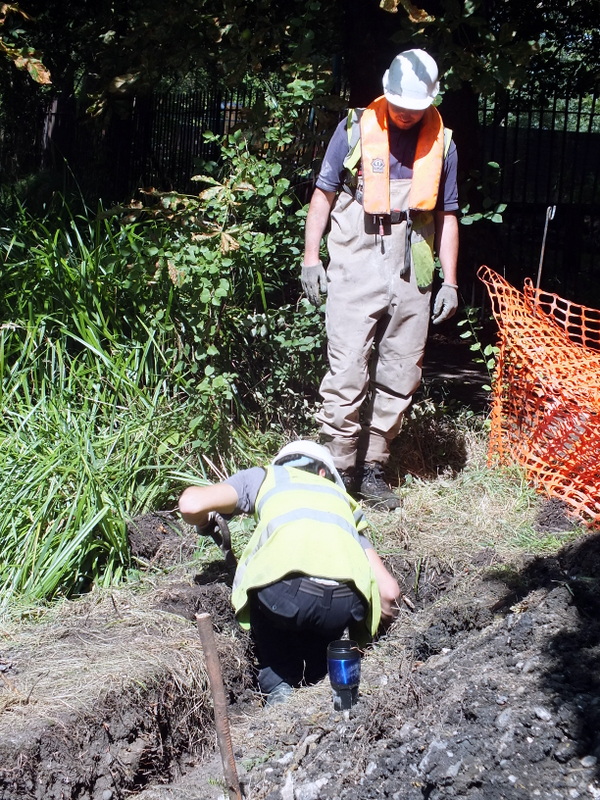 Look out for more updates as the work takes shape over the next week!

We will be holding a number of planting events to plant the island with native plant species in early September so please get in touch if you are interested in getting involved.