The river has continued to change quickly as our skilled contractors from Cain Bioengineering bring to fruition our plans. Nick, Jimmy, Alex, Will and James (with the occasional visit from Pete) have been working hard to continue the bank formation, backwater creation and island regrading with diggers, faggot bundles, stone, gravel and a lot of hard work. 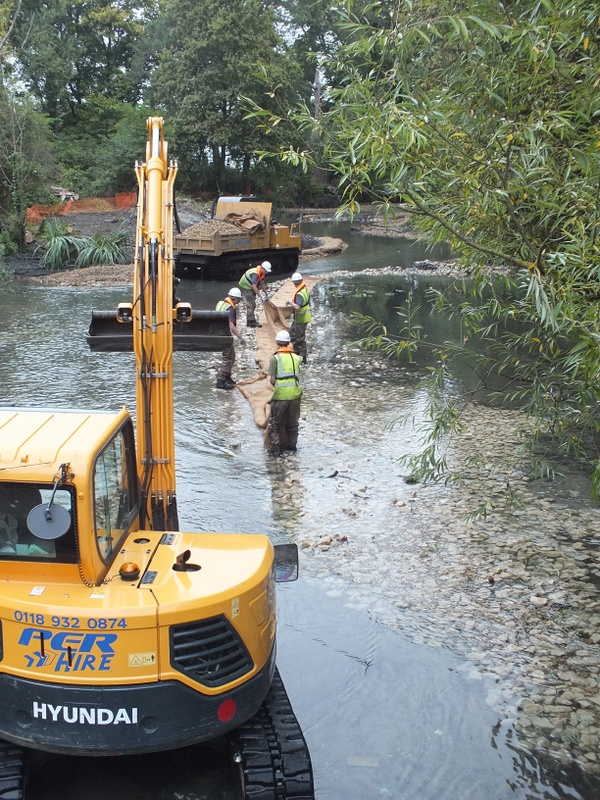 This has resulted in a narrowing of the low flow channel and increased flows instream.  The narrowing and meandering river channel brings a lovely diversity of flow to the river which is important to give different habitats for different species of fish, plant and invertebrate life. 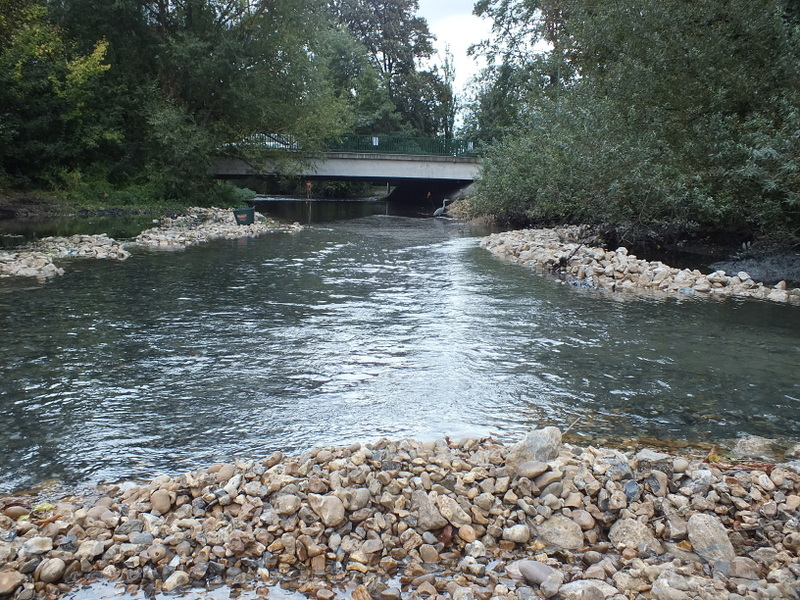 As the work progressed the rivers natural gravels were revealed by the increased energy of the water and the working of the bed.  the gravels vary in size from very small to ‘cow skull’ size pieces of flint.  It is amazing to think that many of these gravels have probably not seen the light of day for hundreds of years! 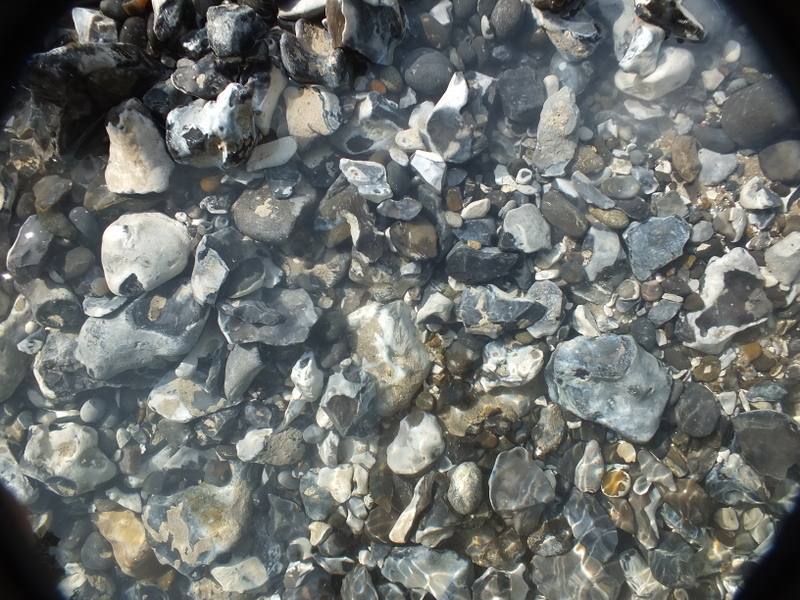 A causeway has been  built which creates a separation of the river from the backwater pond area.  A bed of stone was laid onto which coir geotextile (appropriate considering how many coconuts we find in the river!) was laid. Gravel was used to weight the coir down and then silt and sediment from the pond area was laid over this and the coir folded and sown shut to create, in essence,  a large sausage like growbag! 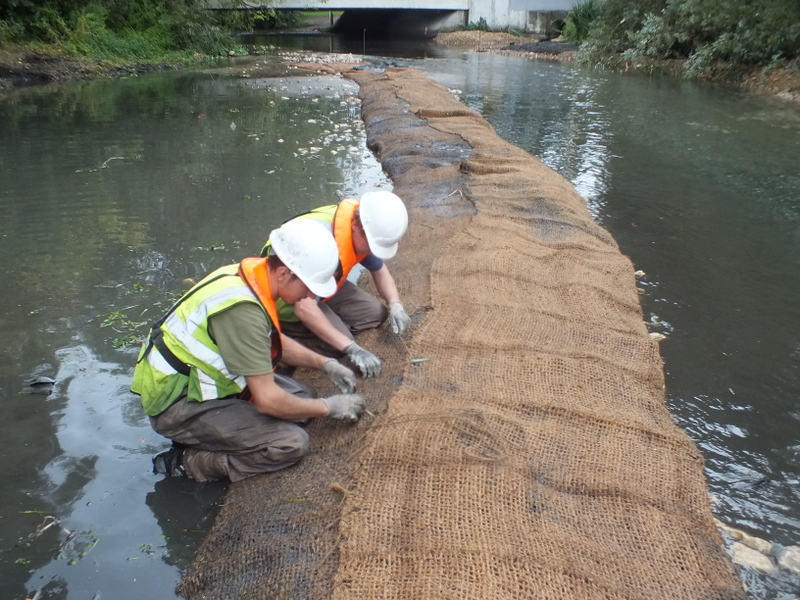 The making of a causeway:

More silt and sediment was then overlaid ready for planting up with marginal plants.

The electricity cables were eventually spiked and cut to prove that they were indeed abandoned and this then allowed work to commence on the removal of the 3rd weir below the footbridge.

Proving the electricity cables are dead so we can excavate the bed:

The breaker soon made short work of the concrete and brick structure and the river was free of its last obstruction (around Culvers Island that is!). Soil from the island and sediment removed from the backwater pond area was placed onto the new banks ready for our planting events on 6,7 and 8th September.  There is still space to attend if you would like to. Contact Erica Evans at Erica.Evans@wandletrust.org to sign up. 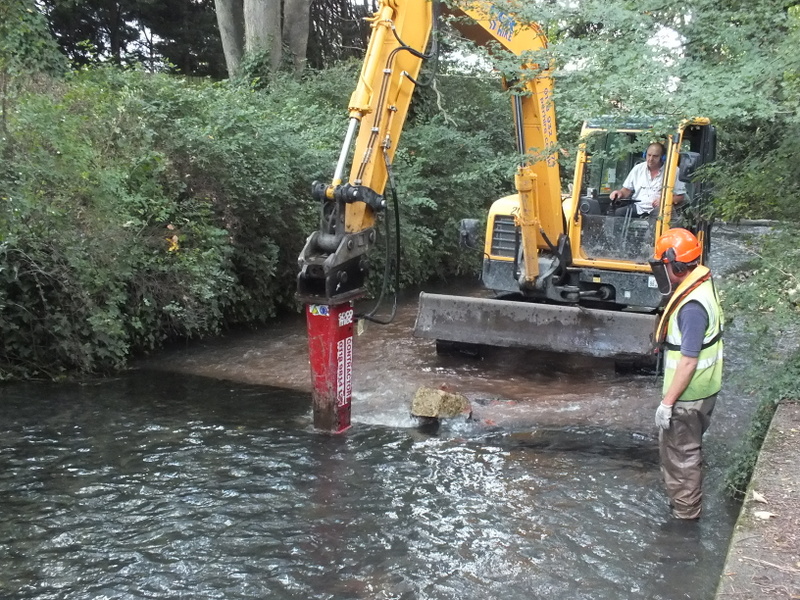 The third weir bites the dust:

Many passersby have commented on how clean the river now looks as the silt has been shifted and the clean gravels are seen. The increased water flow and movement is important in increasing oxygen levels in the water too. The Heron loves the work and has been seen at all times of day feasting on the thousands of tiny fish in the area. 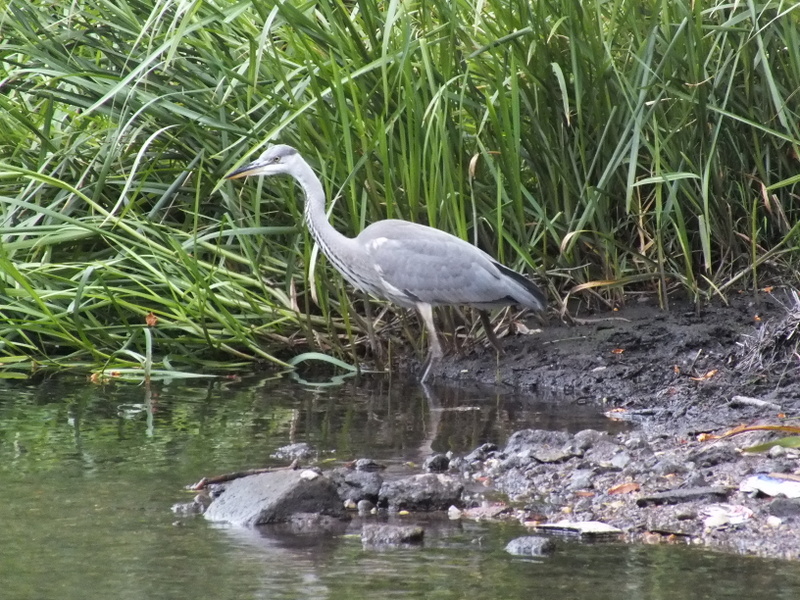 The Contractor’s work will soon be finished – watch this space for a final update!

Then it is onto the planting and hopefully good growing conditions this autumns!