After months of involved planning, the first two weirs on the Hogsmill have been broken out, returning natural flows to the upper river. Land and Water, the contractors undertaking the work, started on site last Monday (5th August) with preliminary preparations. This involved establishing the site compound and tree clearance around both weirs to allow access for the large excavators.

The extra light will also assist in vegetation establishing, which is key in the success of the chosen bioengineered bank solutions. The bank on the downstream weir was also benched to provide a stable platform for the machines to sit on. The footpath adjacent to the upstream weir was diverted into the recreation grounds  and a temporary footpath laid so that the regular cyclists, pram pushers and dog walkers do not have to get their feet dirty.

Next came the fun bit. Armed with a breaker, the excavator was set loose on breaking out the downstream weir’s abutment walls, shortly followed by the weir itself. The tough, re-inforced concrete put up some resistance but ultimately it succumbed with satisfaction as lump after lump fell. The ponded section of river upstream quickly drained through the new channel. 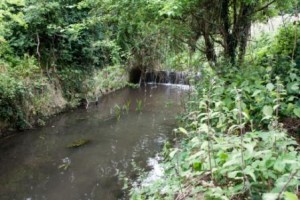 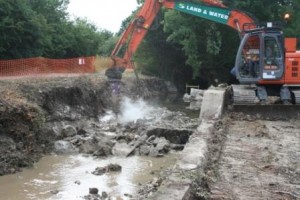 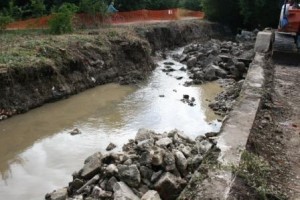 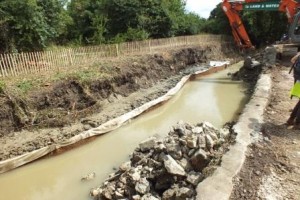 The same process was then repeated on the upstream weir. 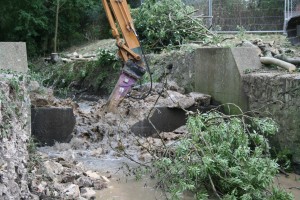 Another one bites the dust!

Where the large, vertical concrete and stone abutment walls once stood forming a distinct barrier between river and banks, these are now being replaced by low lying, soft engineered banks which gradually slope down to the river. These will shortly be planted with a variety of riverine species.

In total approximately 350 metres of river has been returned to a more natural flow regime providing potentially key spawning and juvenile fish habitat. The removal of the weirs now means that there is a 1.5km uninterrupted stretch of river. 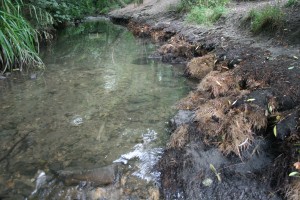 A big thank you for all of those that have helped to get the project this far, especially Stewart Cocker at Epsom and Ewell Borough Council, Matt Horritt who helped us with the flood risk modelling, Cain Bioengineering for the designs, all the bods at the EA , Tom Cartmel at Land and Water, and all the guys’ hard at work on site.

Watch this space for further updates.