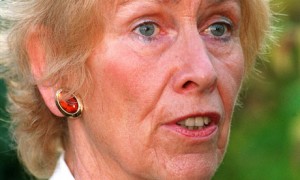 (Image: via the Guardian)

Here at the Wandle Trust we were deeply saddened to learn of the recent death of Dame Angela Rumbold DBE, reported in the Independent, the Guardian, the Times, and the Telegraph.

Dame Angela served as our first Chair of Trustees between 2000 and 2005, having first become involved in the cause of caring for the River Wandle whilst she was MP for Mitcham and Morden.

Trustees’ meetings at her home in Surbiton were run with military timekeeping and crisp yet humorous authority – all no doubt honed on the anvil of the Conservative Party, of which she was Deputy Chairman from 1992 to 1995, and Vice Chairman from 1995 to 1997.

Her previous ministerial portfolios for the environment, education and science gave her a natural sympathy for our long-term cleanup and educational work on the river, and she was instrumental in the early development of our Trout in the Classroom programme.

Even after relinquishing her formal involvement with us, Dame Angela continued to take a strong interest in the Wandle, never failing to respond to our newsletters with an encouraging note.

Erica and I will represent the Wandle Trust at Dame Angela’s funeral at St Andrew’s Church in Surbiton tomorrow, and her inspiring presence in South London will be sadly missed by all.