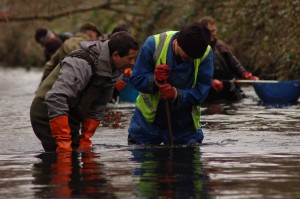 Pictured here on the left.

It was with great shock and sadness that we learned of the death of Robin Reeves, one of the Wandle Trust’s core volunteers.

Robin lived all of his life in the same house in Southfields. He attended the local Elliot School and ended up teaching there during his 35 year career. He also taught at Malory in Lewisham and Southfields Community College where he was Head of House, Head of Year, Fixed Head of Year 7, French teacher, Head of Year 9 Inclusion Group and Head of Inclusion. Robin spoke 4 languages.

Robin felt particularly rewarded by supporting pupils who were in danger of dropping out of mainstream education. Many former pupils have acknowledged his positive guidance and influence.

Southfields College backs onto King George’s Park, which is adjacent to the Wandle, and Robin came to the river with GCSE groups doing their river study for Geography.

Robin had many interests. He was active in the development of AFC Wimbledon Don’s Trust, he was a member of Southfields Tennis Club and played for a table tennis team at St Paul’s Church. His other sporting interests were walking, cycling, running, badminton, golf, karate and yoga. Robin could do a freestanding handstand and recently he had been attempting to perfect walking on his hands.

Since retiring in July 2011, Robin had become increasingly involved with the Wandle Trust.

Robin came to the December community river cleanup at Garfield Road in Merton. He had an allotment next to the river here, and from his plot, which was opposite the viewing platform where the river Graveney joins the Wandle, he was able to indulge in another of his loves, watching birds, as well as growing vegetables.

During the cleanup there was lots of good humoured banter about AFC Wimbledon as he was able to lighten up any situation with his gentle, friendly humour. Everyone seemed to like him. Someone suggested that there were no Wimbledon football fans left now as they had all switched to following Chelsea FC. A twinkle appeared in Robin’s eye, an expression for which he was so well known, and he responded with “Wimbledon AFC has lots of fans, but yes there are a lot of glory seekers around too!” Once after getting filthy and wet in the water and pulling all sorts of detritus out of the river, including a fridge and half a shop mannequin, he said with a grin, “that’s the most fun I’ve had in ages!” 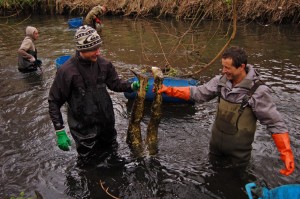 Recently, Robin had also been extensively involved with helping to develop the Trust’s educational strategy, and was supporting Trout in the Classroom. This year he was working with Francis Barber and Thomas’s schools.

Our thoughts and condolences are with his wife Sue, daughter Anna, and son Tom. In addition, Robin was a doting and active grandfather to 4 year old Luke.

He will be much missed.