Last Friday morning Luke and I went to Ravensbury Park to meet MP Siobhain McDonagh as well as Area and Environment Managers from the Environment Agency, London Borough of Merton Councillors and over 20 local residents. Local residents have been suffering from clouds of midges emerging from the river through the Park and have understandably had enough! So we all met to discuss what could be done about it. 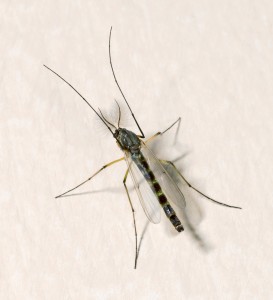 The midges are chironomids which spend the first part of their lives in the river itself. They then pupate and emerge as flying adults, surviving for only a few days to mate and lay eggs at the river’s surface. The problem is that there are so many midges emerging in Ravensbury Park that local residents can’t even open their windows, and it makes a walk through the Park quite unpleasant (and a cycle though the park pretty much impossible without swallowing a few along the way!)

These clouds of midges are an indication that the river ecosystem is out of kilter: the conditions are such that the midge population is not being kept in check as it naturally should, so it has boomed in the last 5 years (notably since the pollution incident in 2007 according to local residents).

Midges are ubiquitous creatures which inhabit most freshwater environments, but they particularly like still or slow moving water. During our meeting we observed that there are likely to be a number of contributory factors to the booming midge population, which all combine in a ‘perfect storm’ in Ravensbury Park (and possibly in Morden Hall Park too):

So what can we do about it? Well, the problem needs to be tackled holistically, addressing all of the issues – and we all have a role to play in this.

Currently, Luke is working in Ravensbury Park to help improve flow and habitat in the Back Channel. This involves thinning out some trees to increase light reaching the river, creating a low-flow channel to enhance the river’s resilience to drought conditions, enhancing the diversity of river habitats and increasing the velocity and turbulence of the water (making it more like a river and less like a pond).  Later this year, the Living Wandle Landscape Partnership Scheme is also planning to start similar work on the main channel through the Park.

All these improvements will help to reduce the conditions in which the aquatic midge larvae thrive in and restore the habitat for animals which would predate on them.

By continuing such river restoration – re-naturalising the Wandle and making it resilient to pressures like climate change – we will chip away at the problem, reducing the number of midges and hopefully encouraging many more attractive species to return to the Park.