On the evening of Tuesday 21st August 2012, a fire at Thames Water’s Beddington Sewage Treatment Works resulted in a loss of power and the consequent release of partially treated sewage into the Wandle. This caused ammonia levels in the river to rise and oxygen levels to fall resulting in a fish kill.  The sewage works is now fully functioning with only treated effluent being released and a cleanup operation is underway to remove any remaining dead fish. 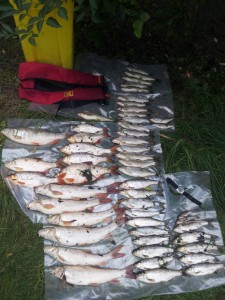 A sample of the dead fish

Although what happened is broadly known, we’d like your help to piece together specific details.  This will help the Environment Agency, Thames Water and ourselves with investigations to assess the impact of the event and to plan for future pollution prevention and restoration work.  If you have any information, observations, photos, etc. please do post them through the comments section below.  We’re particularly interested to know what time the pollution began and when it reached different points along the river as well as when/where any dead fish were seen and whether they were floating or on the river bed.

If you see any new pollution, please report it straight away to the Environment Agency incident line on 0800 80 70 60.

6 thoughts on “Pollution Incident: What Did You See?”