Last weekend was an interesting and productive one as far as the Wandle was concerned! 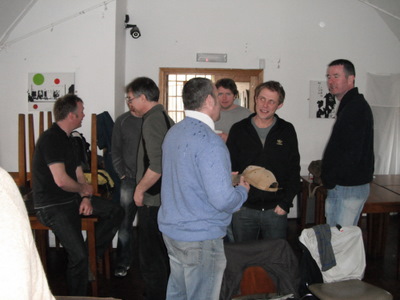 Delegates from eight rivers around the country came together to hear about each other’s work and discuss our achievements and challenges, from the inspiring habitat work of the River Erewash Foundation to the challenges ahead for the newly (re)formed Salford Friendly Anglers’ Society on the River Irwell in Salford and Manchester; I think it’s safe to say we were all thoroughly impressed by their enthusiasm and determination to tackle the 100+ CSOs and the chemical pollution events affecting the Irwell! 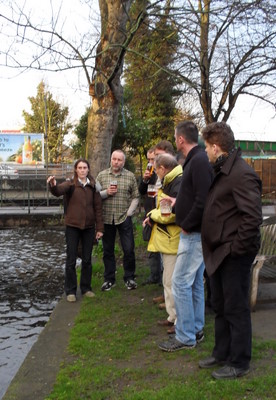 Sunday saw our long-awaited restoration day on the top of the Wandle in Carshalton.  The project started over two years ago with an overall aim of reintroducing our own Wandle population of urban-adapted wild brown trout. 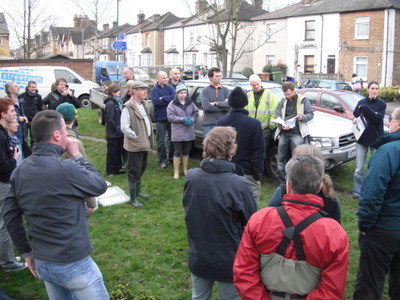 Although this section of the upper Wandle appears to be natural with good wildlife including kingfishers, heron and the odd egret, it was actually beneath a chemical works less than 20 years ago!  Due to the hard work of many people, this section was restored in the early 1990s and now looks fantastic, however, if you investigate a little more closely, you might notice that the only fish present are sticklebacks (and the occasional formerly domestic goldfish!) the river bed is fairly flat and uniform and that anything living in the water is quite exposed with few places to hide. 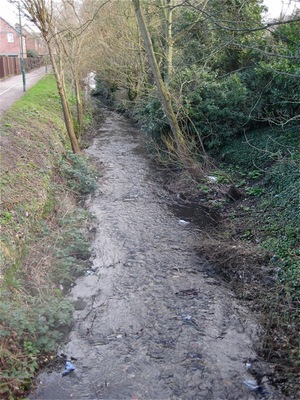 This all adds up to less than ideal fish habitat and so we need to improve this section before we can encourage a new population of trout, or any other fish, to inhabit it.  The resulting improvement work is taking place in three phases.  The first phase involved the lowering of three small weirs which had caused the river to silt up and could have prevented a barrier to fish trying to move upstream. 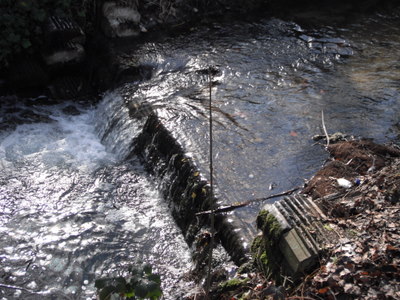 This weir has had two courses of bricks removed; the notch will now be lowered further

The second phase involved Sunday’s habitat improvement work and the third stage will enable fish to get past the 1.5 m high wall that is presented by Butter Hill Mill Weir, using a fish pass.

And so it was that on Sunday morning, 50 eager volunteers and staff from the Wandle Trust and Wild Trout Trust met on the banks of the upper Wandle in Carshalton to learn about the project and the techniques we can use to improve habitat. 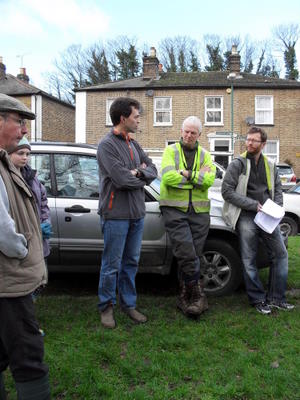 The day was kicked off by our local MP, Tom Brake, (read his account of the day here), who then handed over to Andy and Paul from the Wild Trout Trust to lead us in one of their famous ‘Practical Visits’ where they teach local volunteers valuable skills in how to improve their local river. 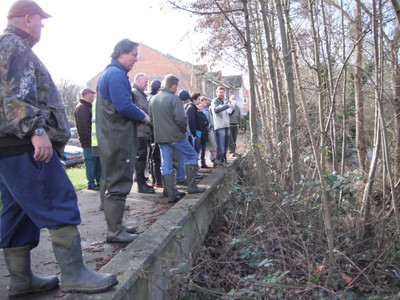 After being split into two groups, we had an educational walk along the stretch of river we were restoring to get an overview of the project and understand what it was that we were trying to achieve; an exercise that was very valuable to show us how are work was contributing to the bigger picture. 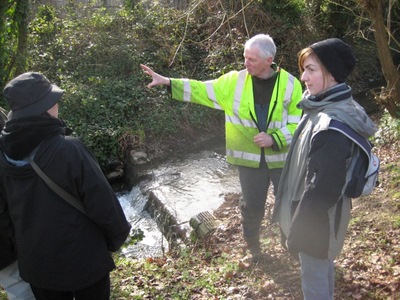 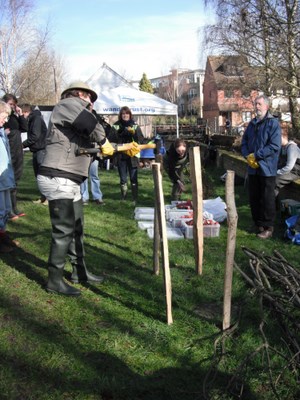 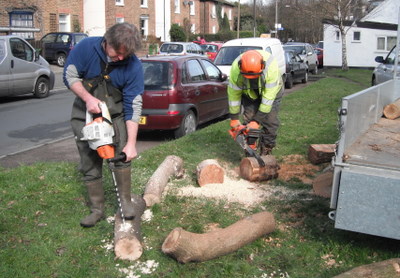 whilst Paul led a group in tying brash bundles that would be used as fish cover in the river. 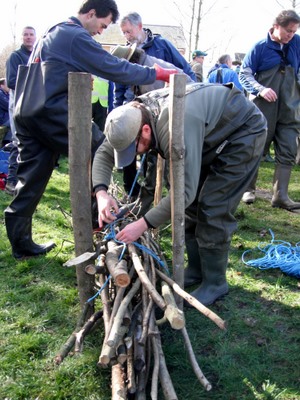 It was then time to don waders and get in the river with much activity banging in 2m long rebar to secure half logs and mini upstream ‘V’s in the channel. 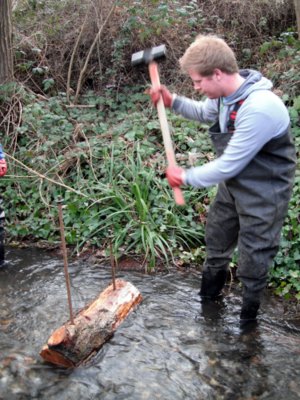 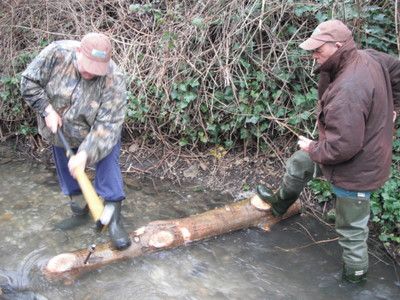 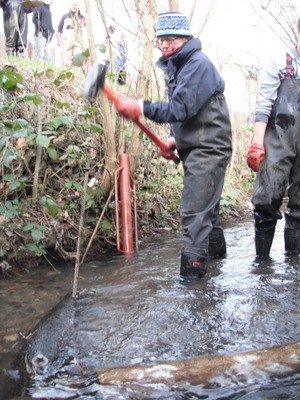 Several volunteers remarked on how nice it was just to stand in the river and have a chat about the project! 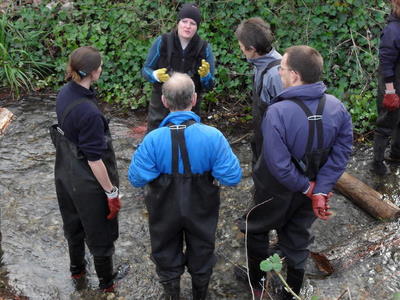 Others set to collecting baseline data against which we can monitor the impact of our work in the months and years to come. 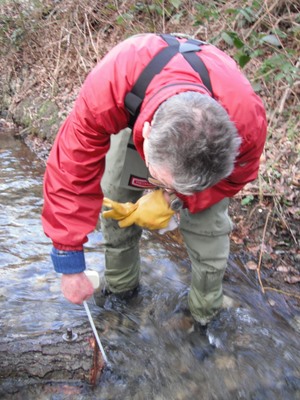 The purpose of securing most of this wood in the river was to vary the flow and use the water to scour out holes in the river bed and clean the silt from the gravel (the analogy that Andy used was ‘like the bottom of an egg box’!)  This physically diverse habitat provides a variety of conditions for fish to use at different stages of their life cycle, for example spawning on the clean gravels and then, when they grow up to be adult fish, hanging out in the deeper holes. 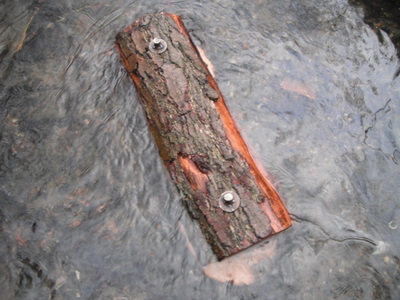 To remedy the lack of cover, we put in some half-logs raised off the river bed, as well as some brash bundles and mattresses (structures made from sticks and branches) which fish can dart under and hide from predators. 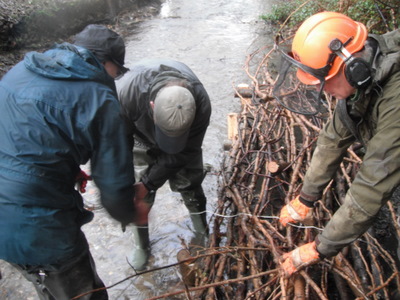 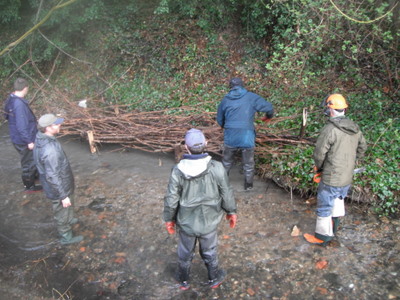 Fortified by Jo and Sally’s delicious food, we finished the work in super quick time, although not before we all got a drenching from the elements leaving some hard core volunteers rather soggy! 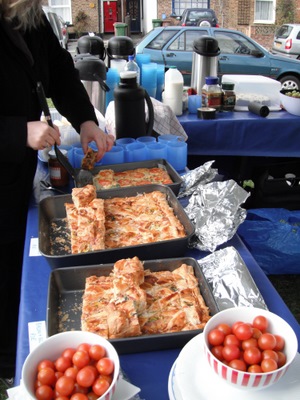 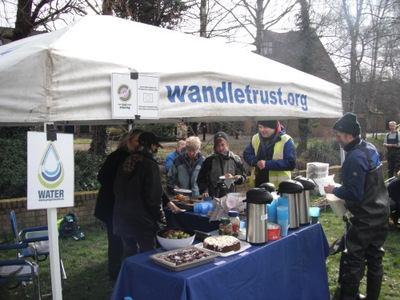 All in all it was a fantastic day and a job well done. Thanks to all our wonderful volunteers for turning up, being so enthusiastic and not minding the odd bit of standing around:

Update: our friends at the Wild Trout Trust have now posted their own report on the weekend’s work: click here to read it!

This was a WATER river rehabilitation and restoration event selected within the scope of the INTERREG IVA France (Channel) – England cross-border European cooperation programme, co-financed by the ERDF.

2 thoughts on “River restoration: A new era for the upper Wandle”