This time last week, I was fortunate enough to attend the launch of WWF’s new Rivers on the Edge initiative: a significant new project that aims to focus public and political attention on the plight of Britain’s globally-rare, and increasingly threatened, chalk streams. 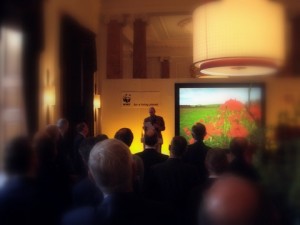 During 2008 our very own little Wandle spent at least a few days being assessed as a candidate River on the Edge: a basket-case for WWF to show to politicians and other opinion-formers as an example of what not to do to a river, and generate ideas about how to improve prospects for many more chalk streams in the future.

But in the end – and we’re shocked for all of these, rather than disappointed for the Wandle – this dubious accolade went to the Kennet, Itchen and dried-out upper tributaries of the Lee.

Fittingly, one of the evening’s key speakers was writer-broadcaster-conservationist (and friend of the Wandle) Charles Rangeley-Wilson.

Now he’s blogged his own speech here we’re feeling no anxiety about stealing his thunder – and if you’ve got time for another long, interesting read, check out the Hansard report on the Parliamentary debate that followed the launch next day (scroll down the page to Column 256WH).

So… kudos to Oliver Heald, Martin Salter and all those other MPs demonstrating leadership on a globally-important issue… kudos to WWF for starting to show everyone how much damage water can do, just by coming out of our taps instead of the ground… and kudos to the HSBC Climate Partnership for underwriting this campaign of public awareness.

For the Kennet, Itchen, Beane, Mimram, Wandle and all our other precious chalk rivers, will we look back one day and think: This was the turning-point?