Great news to start 2012!  Trout have recently been seen spawning in the restored Carshalton arm of the river near Butter Hill.  The newly notched weir has allowed fish to migrate upstream and utilise the gravels that were introduced as part of our river restoration works in the summer and autumn.

A trout creating a redd (trout egg nest) by flapping its tail to clean away silt, dig a hole in the gravel, and cover the eggs with more dislodged stones: 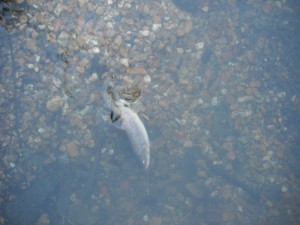 Trout eggs require good flows with well oxygenated, cool water for successful maturation and hatching.  The combination of the improved access for fish to the new gravels and faster flows from the narrowing and flow deflectors have created ideal habitats for the spawning fish with some fine redds being formed.

As you can see from the photo below, one redd was cut in the faster flow provided at the end of the wooden flow deflector (location of  this deflector and other features were suggested by our good friend Paul Gaskell at the Wild Trout Trust – cheers Paul!) The redd can be seen as a cleaner patch of gravel which contrasts with the siltier gravel around it: 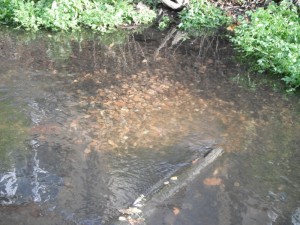 The redd will allow eggs to hatch (in approx. 2 months) and emerging tiny fish (alevins) to shelter in the gaps between the pebbles below the surface of the gravel bed.

It is important that the redds are not disturbed until they hatch in a couple of months.

Many thanks to all who have contributed to the restoration work over the past year: our many enthusiastic volunteers alone have given over 500 hours of hard work to the project. Big thanks too to the Wild Trout Trust for their advice and support throughout. We can already see that the fish are appreciating it!

Update: this exciting news has now been picked up by Total Flyfisher, and Angling Times is also running a Wandle story: click the links to read more.

Meanwhile, Sutton Guardian’s version implies that the pollution incident in 2007 damaged the river as far upstream as Carshalton: this isn’t correct, since the spill entered the river near Goat Bridge, but it’s certainly true to say that Thames Water’s settlement helped us to fund this work as part of the Living Wandle project, which is vitally important to make the whole Wandle catchment healthier and more resilient for the future.  And, as a result, we certainly hope that the winter of 2011-12 will be the river’s most successful trout spawning season for more than 80 years!