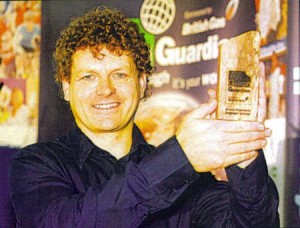 Today’s second Wandsworth Green Guardian Awards at Battersea Arts Centre saw some of the borough’s most dedicated environmentalists being recognised for their hard work.

And we’re thrilled to announce that one of our Trustees, Gideon Reeve, received the prestigious award of Green Champion of the Year.

Apart from running our annual Trout in the Classroom programme, Gideon makes donations to green projects from the profits of his own Environmental Yoga business.

It’s an outstanding level of personal, pioneering commitment that won him this recognition, and we’re proud to have him as one of the longest-serving members of our team at the Wandle Trust.

“I was very moved and touched – it really is an honour to receive this award.  I’ve been working really hard for years on a lot of projects.  It doesn’t always pay financially to be environmentally friendly, but it’s not about profit, it’s what I believe in.  It’s sometimes a bit of a slog, but this has given me such a lift”.