European eels (Anguilla anguilla) once thrived in London’s rivers but the number of young joining the adult populations have dropped by over 95% since the 1980s and the species has been classified as ‘Critically Endangered’ by the IUCN Red List of Threatened Species since 2008.

One of the major threats to eels in freshwater are barriers to upstream migration such as weirs and sluice gates that reduce the amount of habitat available for eels to grow and mature. 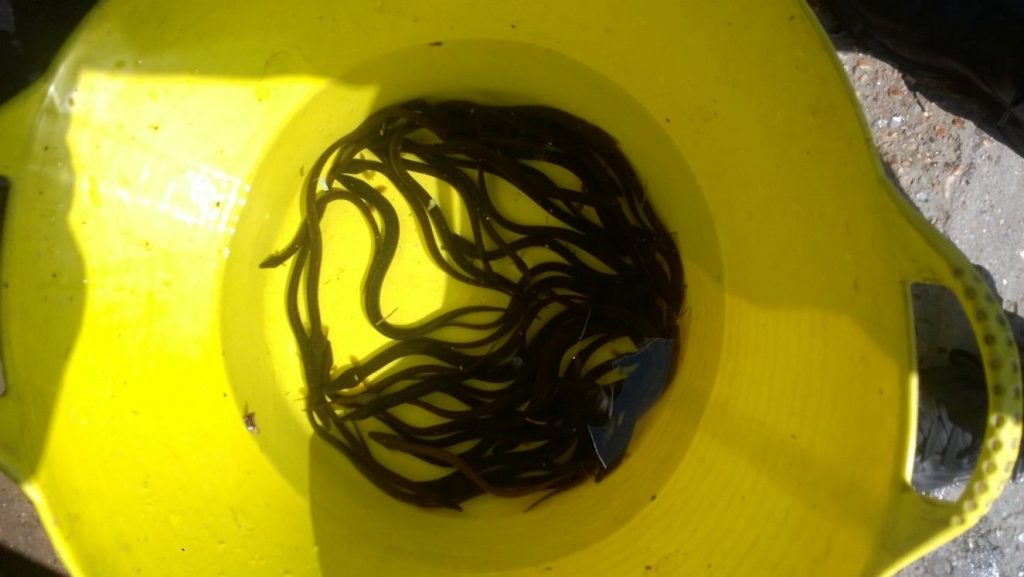 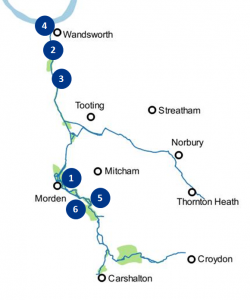 What’s been going on?

This project aimed to improve eel passage along the Wandle by installing eel passes at six locations where structures were a complete or partial barrier to migration. All installations were completed by Wandle Trust staff and assisted by local volunteers.

1. In June 2017, the existing eel pass at Morden Hall Park was repaired, extended and fitted with a monitoring trap. This site was then used by ZSL to train local volunteers, and National Trust staff to monitor elver migration along the Wandle.

2. The Topps Tiles tiles site in Earlsfield was delivered in December 2017 (in the snow), which included a row of lift out eel tiles with upstream deflector, and a section of low profile bed tiles on an adjacent channel. This site was testing the improved steel brackets which were fabricated by a local contractor/volunteer. These installations were designed as ‘easements’ to allow eels to navigate the fast flowing sections of the heavily modified concrete channels. Two old, defunct eel passes were disassembled and removed from site.

3. The Trewint Street easement was installed in December 2017, and consisted of a 30 m section of the new ‘low profile’ bed tiles that were commissioned for this project, with a short section of flexible bristles to navigate over a 300 mm wooden baulk at the upstream end.  This has provided an additional route up the left hand channel which offers a less turbulent route than the fish pass in the right hand channel.

4. The eel pass at EDF was installed during Dec 2017/Jan 2018 with a 15 m section of ‘low profile’ bed tiles. As some high tides overtop the weir, these works were designed to increase the range of time/tides that this structure would be passable to elvers.

5. Improvements to an existing eel pass upstream of Ravensbury Park were installed in March 2018. An extension piece was added at the upstream end to prevent debris blockages. At the downstream end, a deflector plate was added to reduce turbulence, and four standard bed tiles were installed to direct eels towards the pass entrance. 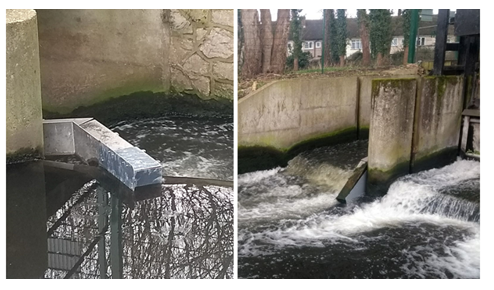 6. This gravity fed eel pass was installed on a small side channel near Poulter Park in March 2018. This was a cheaper and more secure alternative to a pass that had previously been stolen.

We would like to give a huge thanks to all our volunteers who helped install these passes and those who are continuing to monitor eel numbers during the current season! 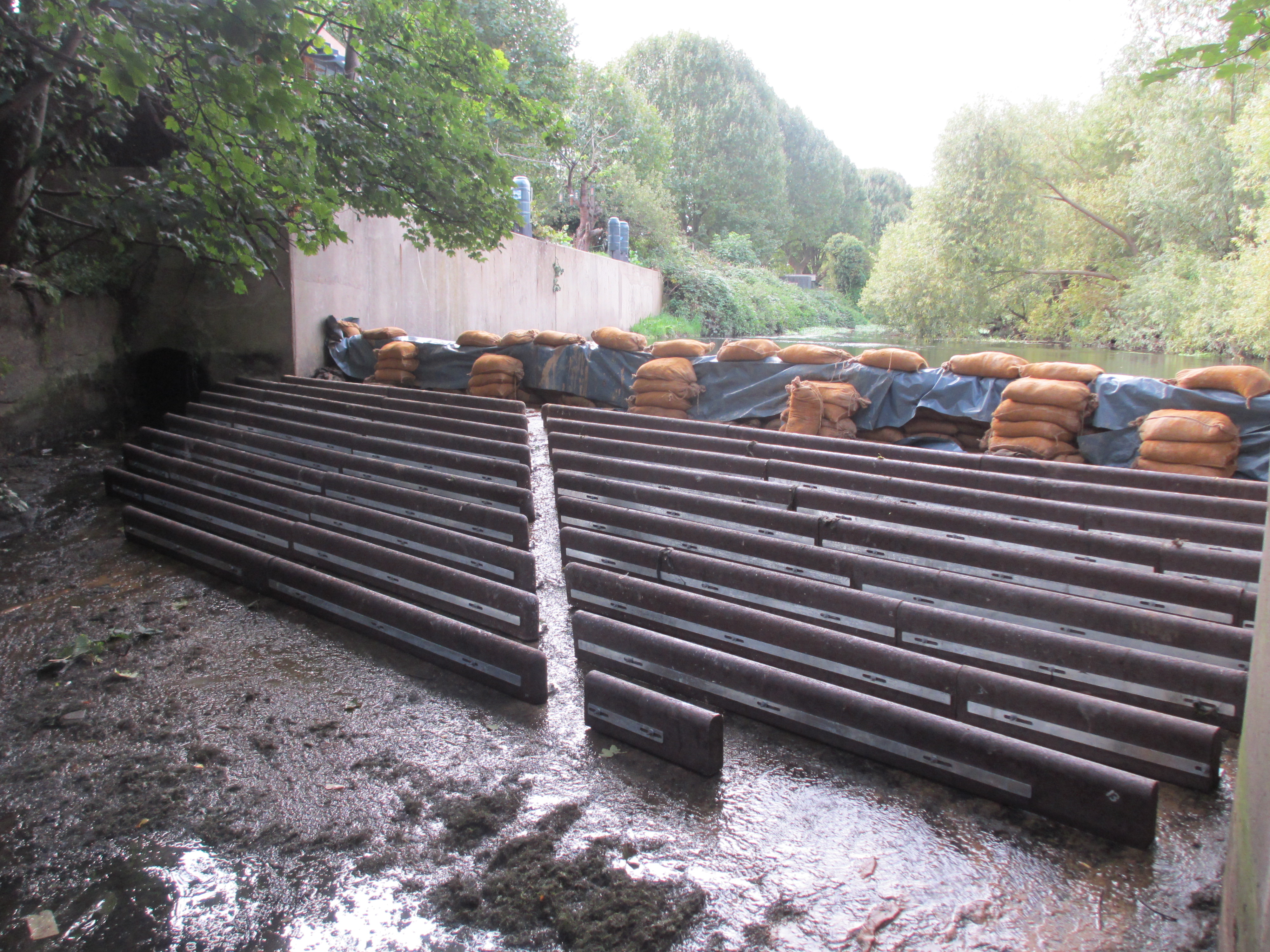 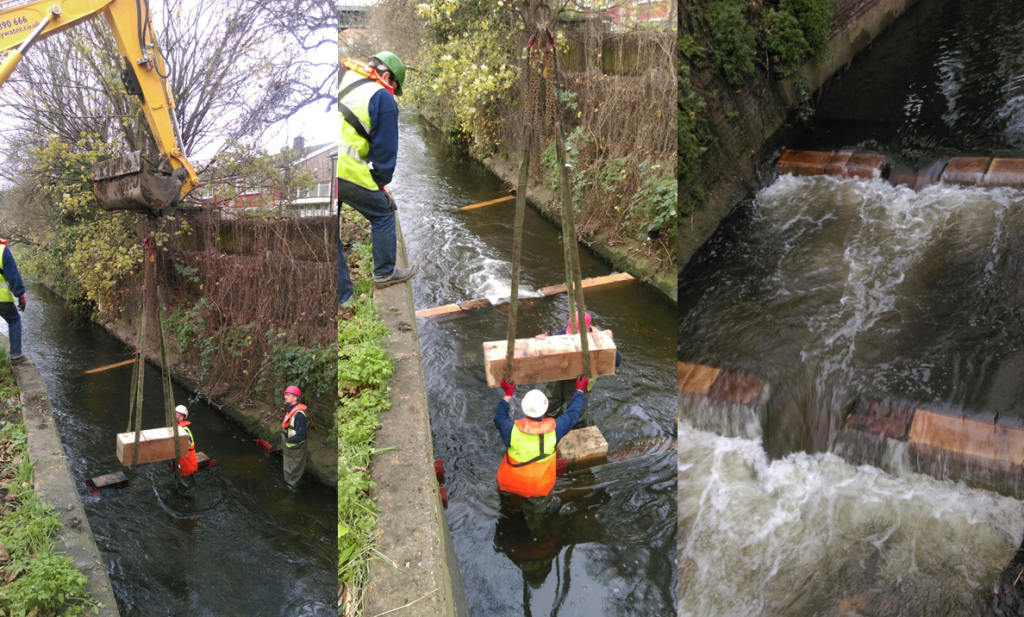 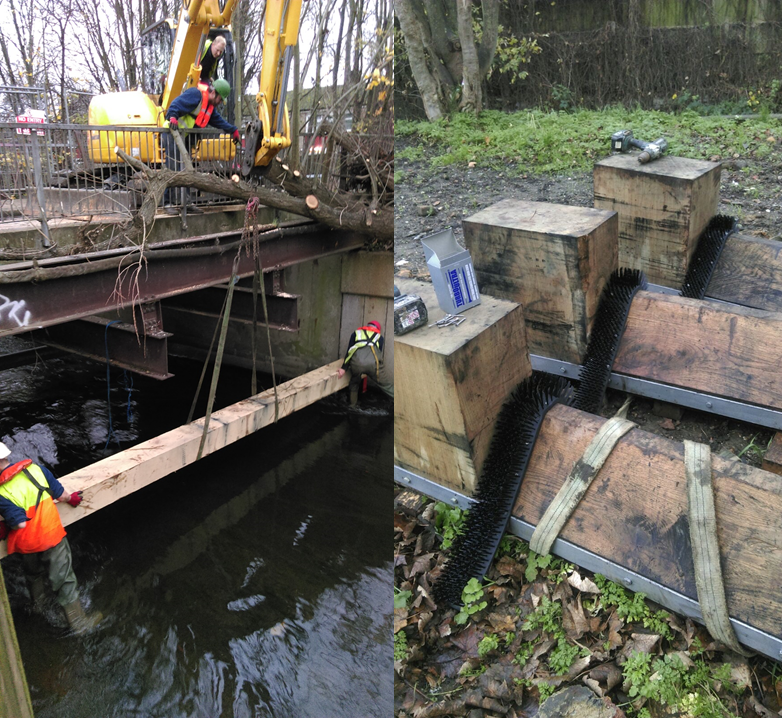 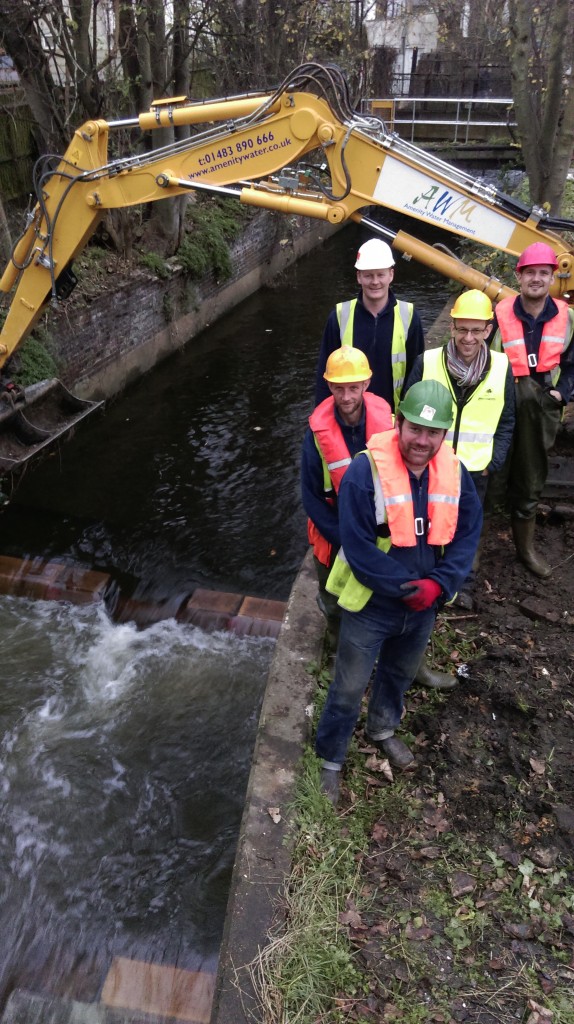 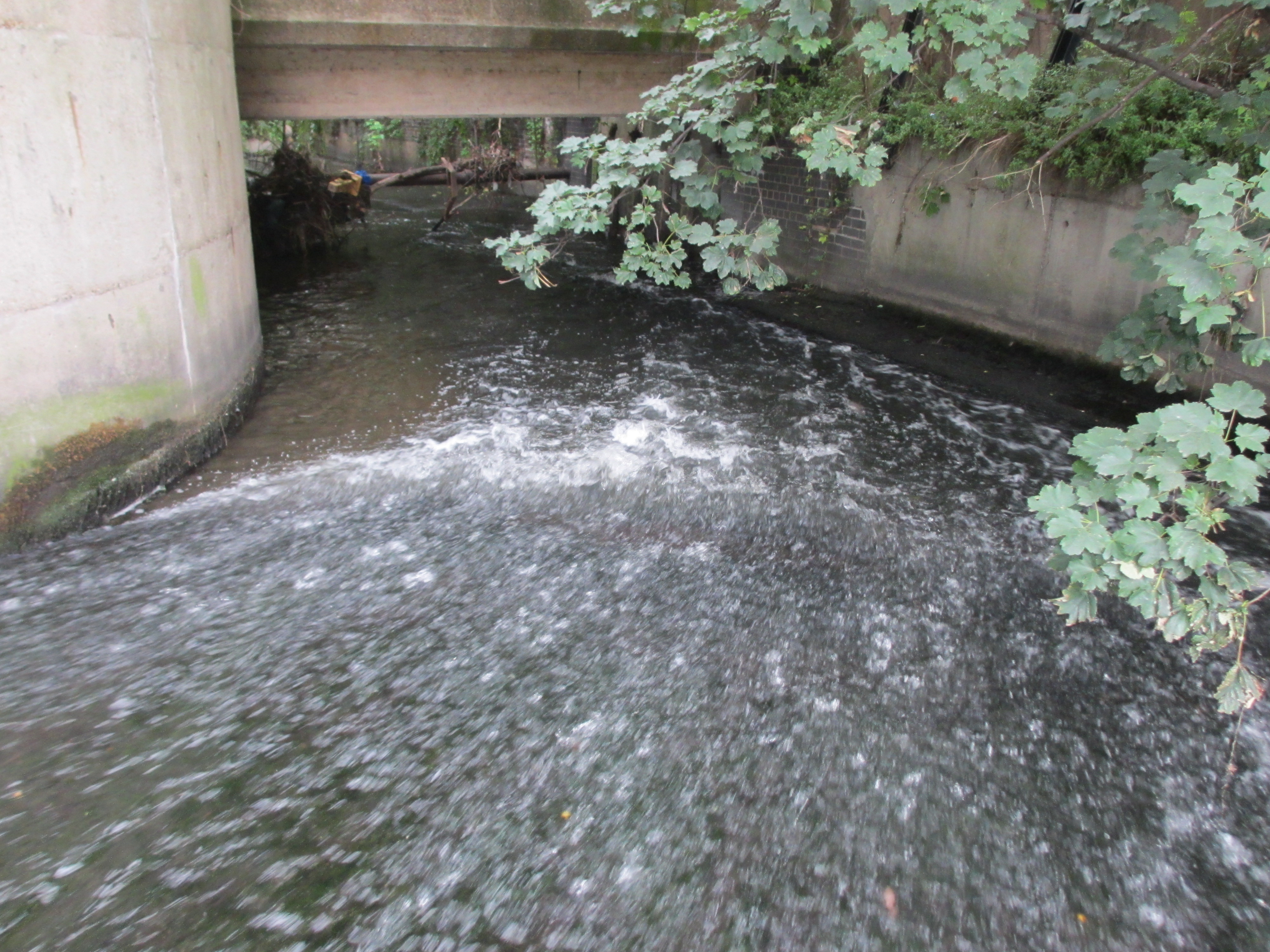 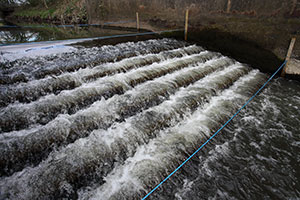 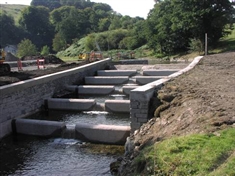 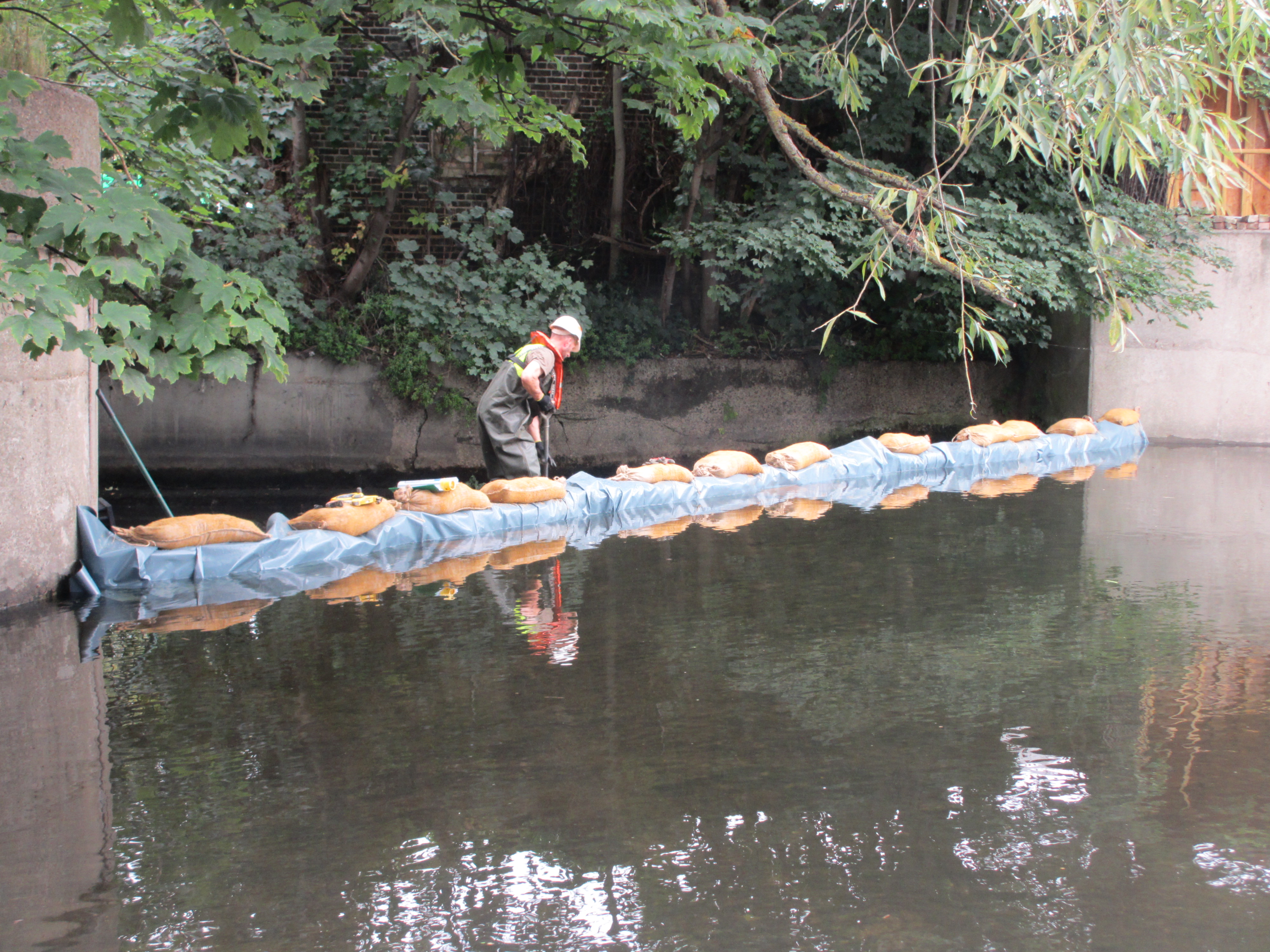 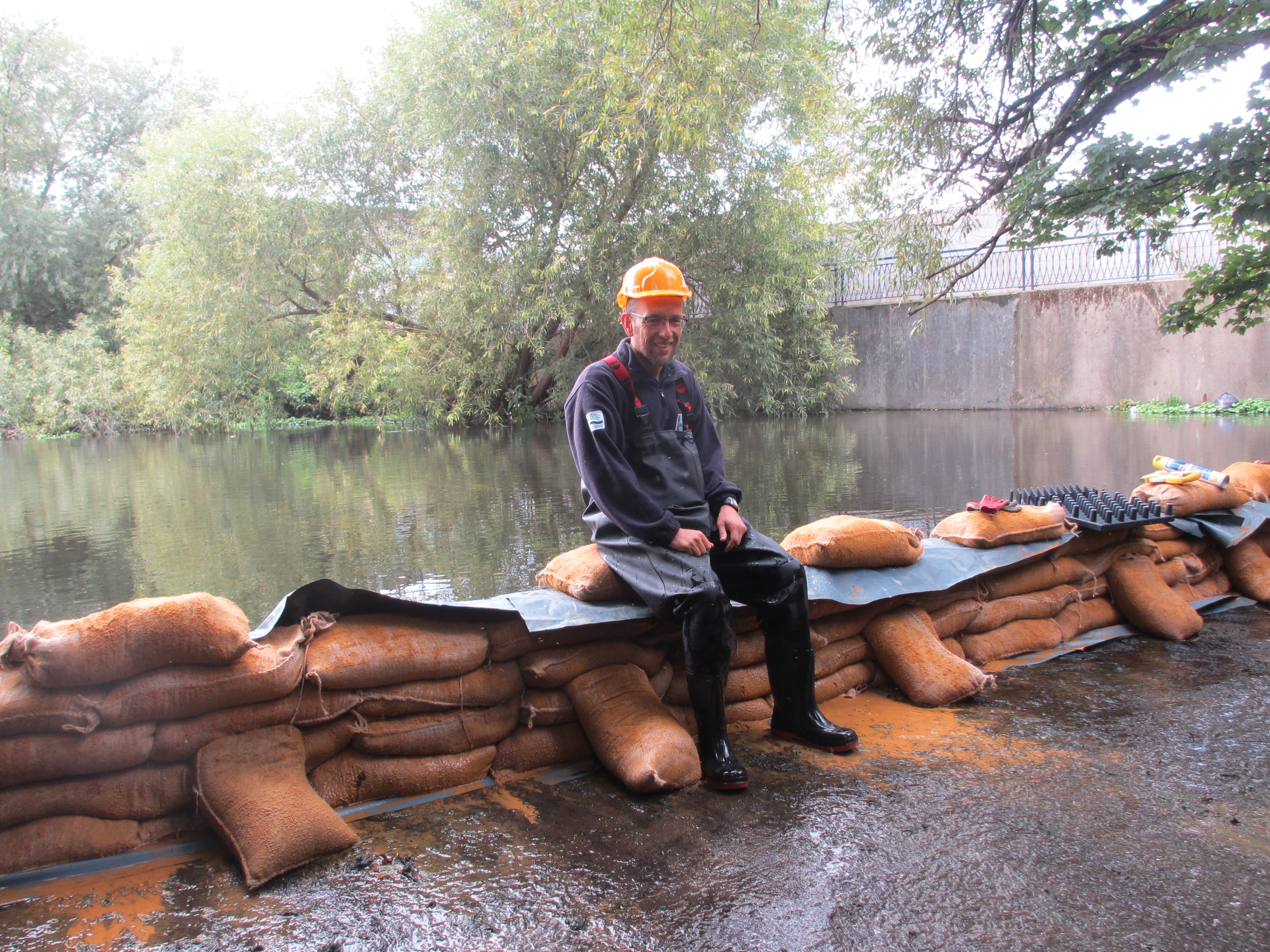 Our restoration projects along the Wandle are all progressing well, and it is time to introduce the next site on our list: the Ravensbury Park Back Channel.

The Ravensbury Park Back Channel is a remnant of the industrial milling era along the Wandle. Back channels, or “by-pass channels” were used as a mechanism to control the water passing through a mill allowing us to increase or decrease the flow depending on how much power was required. Although no longer used for this purpose, the back channel at Ravensbury Park has become part of the park’s landscape and could offer a valuable refuge for wildlife in the Wandle; in particular fish which could use the channel to by-pass the weir.

So what’s the problem?

Like so many urban and rural rivers, the Ravensbury Park back channel has been engineered and modified to contain the river within a predetermined channel. This removes habitat and creates a stream with little variation. 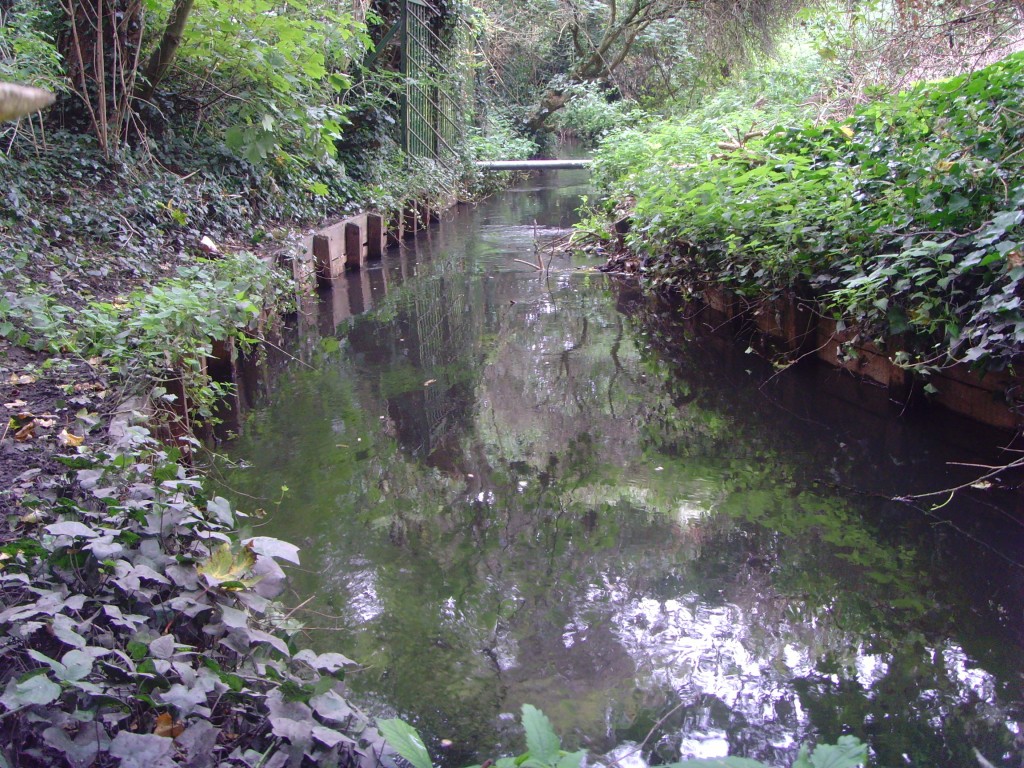 Wooden banks and channelised nature of the stream

To protect the surrounding landscape from flooding, the natural sloping banks of this stream have been replaced with concrete and wood. This creates a ‘hard-edged’ bank and prevents important natural communities of marginal and aquatic plants from establishing here. A more gradually sloping vegetated bank provides habitat for many different species of riverine wildlife. Without this habitat there is a significant loss of biodiversity. 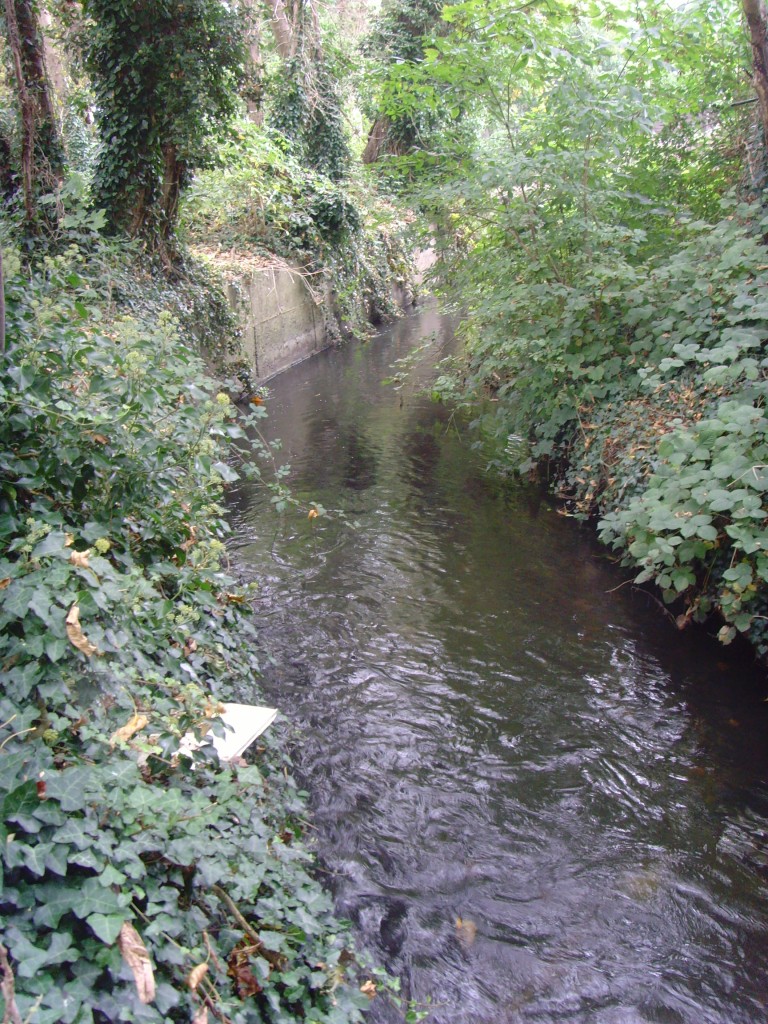 A high concrete bank removes all interaction with the stream ecosystem.

The Ravensbury Park back channel suffers from low light levels due to a dense tree canopy. This canopy limits the growth of aquatic plants both around the stream as well as within the stream. 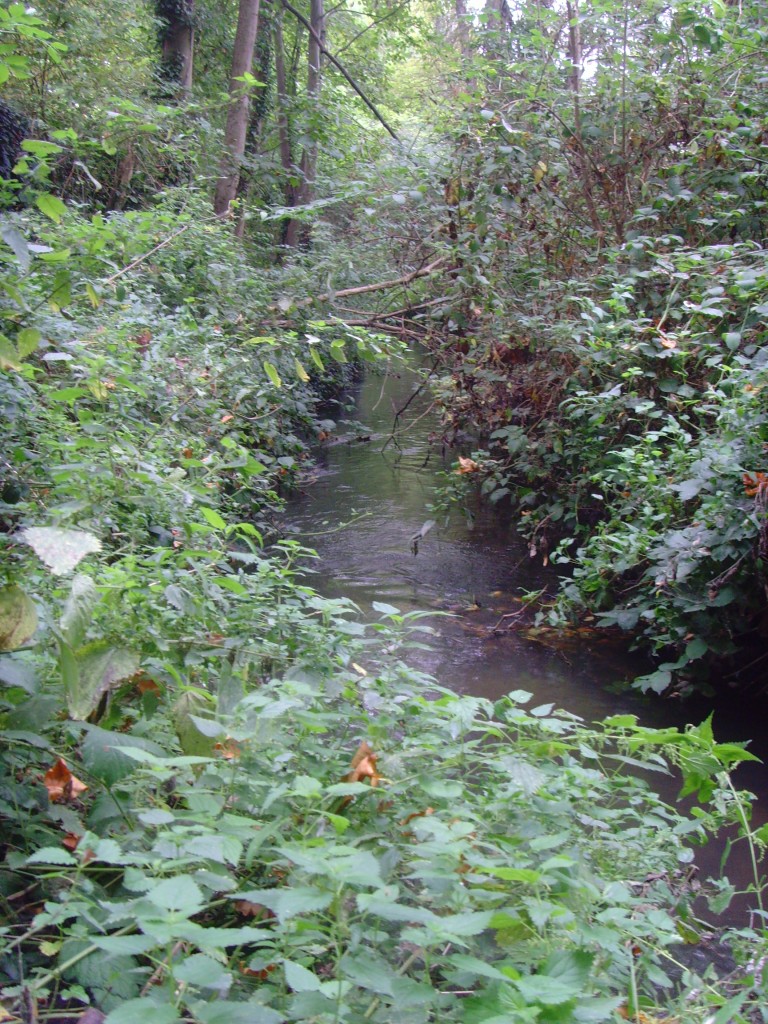 Each of these issues on their own have negative consequences, but combined they significantly impact on the ecological structure and function of this little stream.

What can we do?

Over the next few months, the Wandle Trust will be taking steps to restore the Ravensbury Park back channel. This work is being funded by Defra’s Catchment Restoration Fund, and is also part of the Heritage Lottery Funded Living Wandle Landscape Partnership.

The main aim of the restoration works will be to create new habitats both in the stream and along the margins that will support fish, invertebrates and birds. More importantly, our works will provide a favourable environment for both aquatic and marginal plants which are a fundamental source of food and shelter for some organisms; vital for a thriving ecosystem.

We will be working further on our plans for this stream so keep your eyes peeled for new updates.