For our July cleanup, we headed to Goat Road in Mitcham.

This was the first event that myself and Hannah ran since taking over from Polly and we would like to thank everyone for being so welcoming and helpful. We would especially like to thank Polly for showing us the ropes! 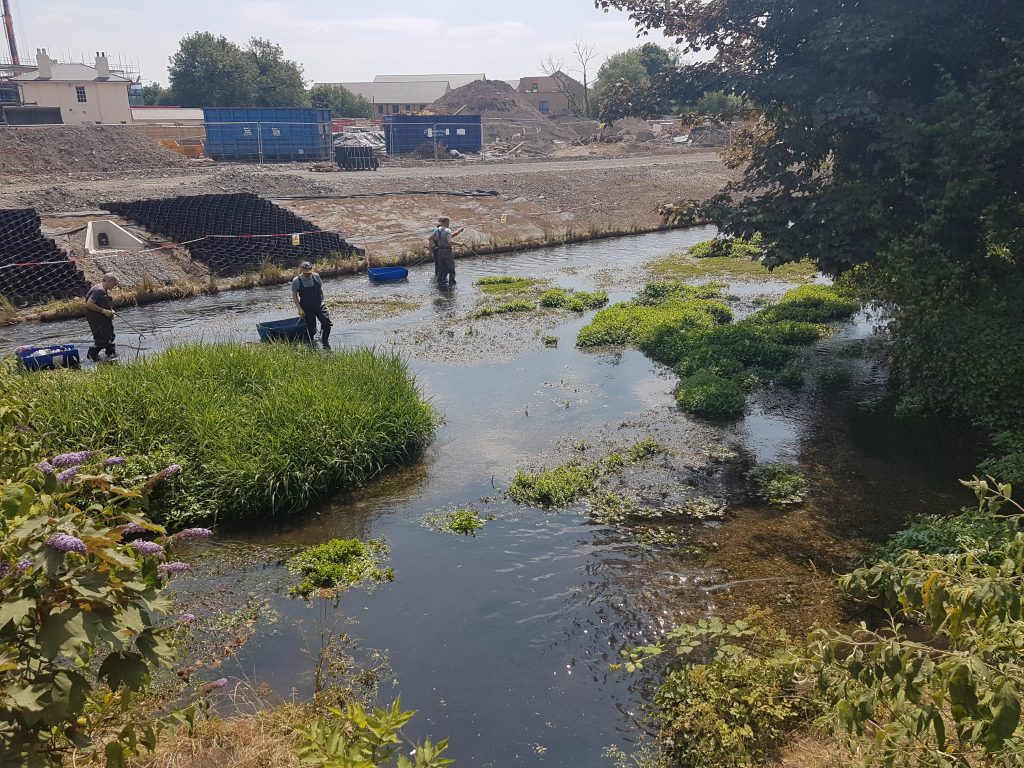 We started off the day with the usual Welcome Talk and Health & Safety briefing. It was very hot, but everyone was still eager to get wading and litter picking! We had a great turnout with about 30 volunteers working hard in and around the river.  A few members of the group also spotted some Himalayan balsam and worked as a team to remove it before it could spread seeds any further.

Throughout the day we removed lots of plastic litter and we also found a few interesting things, including a passport, a hammer, a king size mattress, a fridge, a (fake) Rolex and a pram. 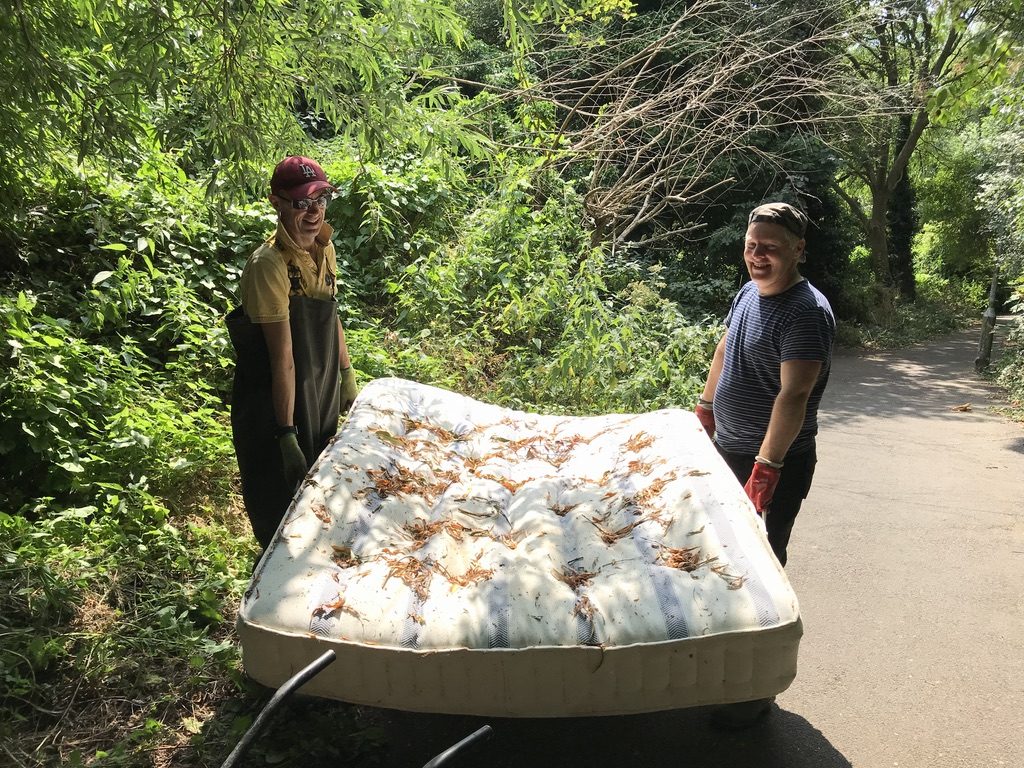 Our lunch break consisted of cake eating, tea drinking and hiding out in the shade, before setting off again further along the river into Poulter Park. 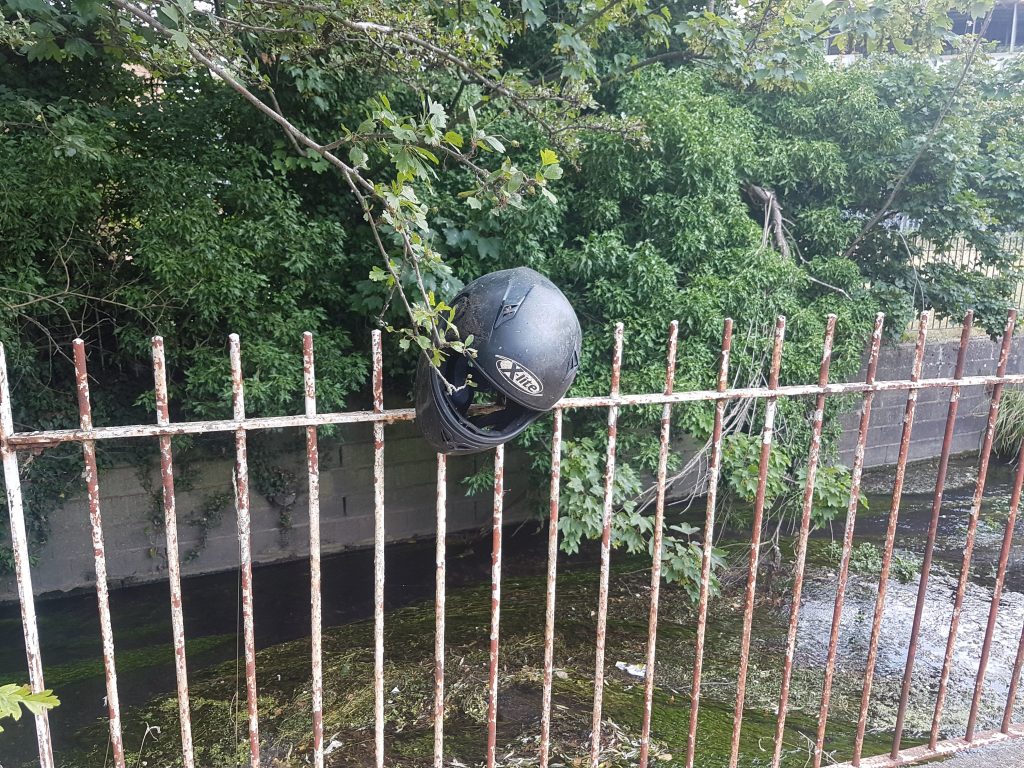 Due to the fast flow and depth of the water, we could not wade along much of the river here, but we still came across a child’s bike, and of course lots more litter! 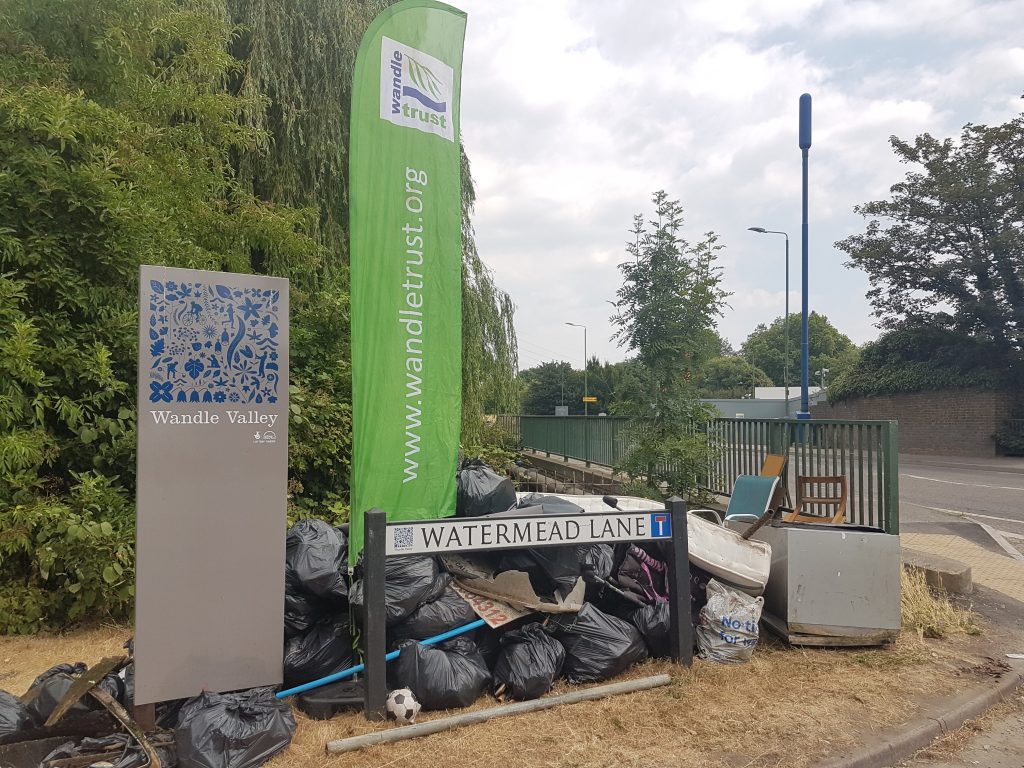 We ended the day by showing how two minds really are better than one as we all worked together to ram the van full of all the equipment in some sort of organised manner (you’ll all be happy to know that Hannah and I were not flattened by any equipment when we unloaded the van!)

On a more serious note…These events truly demonstrate the impact that plastic waste is having on the environment, and why we all need to help tackle the plastic pollution issue now. It is great to see both regular and new faces coming along to our events – let’s keep up the good work!

See you next month!

Huge thanks for the warm welcome, and to everyone who helped unpack and pack up the van during the event, Rosie for supervising the Event Tent, and Sutton Council for organising the collection of all the rubbish the next day, Big Yellow Wandsworth for providing free storage space for our equipment and to our funders, Tesco!

The Trewint Street bridge in Earlsfield is a fly-tipping blackspot which has caused concern for local people and conservationists for many years.

At the end of 2017, a significant pile of rubbish had started to accumulate again at this site in the river under the bridge, pictured below.

Today, the rubbish pile is enormous, almost to the level of the Wandle Trail itself, and there is also extensive fly-tipping and littering along the trail and pavement.

The Wandle Trust and the Wandle Valley Regional Park Trust received large numbers of emails and Tweets reporting this issue, which we have duly reported to the Environment Agency and to LB Wandsworth, dating back a good four months.

The improvement work to the Wandle Trail, along with recent interventions by the Wandle Trust to create better river habitats,  aims to regenerate, enhance and make the Wandle Trail more accessible for the benefit of local people.

The Wandle Trust organises frequent community clean-ups along the full length of the River Wandle including work at Trewint Street, usually twice a year, to remove rubbish from the river and its banks, which Wandsworth Council have supported by disposing of the collected waste.

Unfortunately, the magnitude of the rubbish that is regularly being dumped at Trewint Street is far beyond the scope of community volunteer events, and we at the Wandle Trust believe that clearance here requires professional expertise organised by the landowner.

In the first instance, there is an urgent need to coordinate the removal of the rubbish from the river as this could be polluting the water and is only encouraging further fly-tipping.

Secondly, and of equal importance, is the need to take serious steps to deter fly-tipping at this site in the future.

The Wandle Trust strongly believes that further action needs to be taken by the landowner, Wandsworth Council, at this site. We will liaise with them and work with them to the best of our ability – but we do not believe we are in a position to solve this problem for them.

The one where we barely moved 15 metres!

For March we headed to Waterside Way – a site we started to tackle last year and only managed to move 10 m before we had filled a rubbish lorry! This time was no different…

One by one, everyone arrived on site and then after the Health & Safety briefing we got started. We headed downstream to where we finished the last time we tackled this site. As soon as we arrived we saw the opposite bank was covered in rubbish and we just couldn’t leave it that way. Waders got in, waded across the Wandle and then climbed up the bank to tackle the fly-tipping. 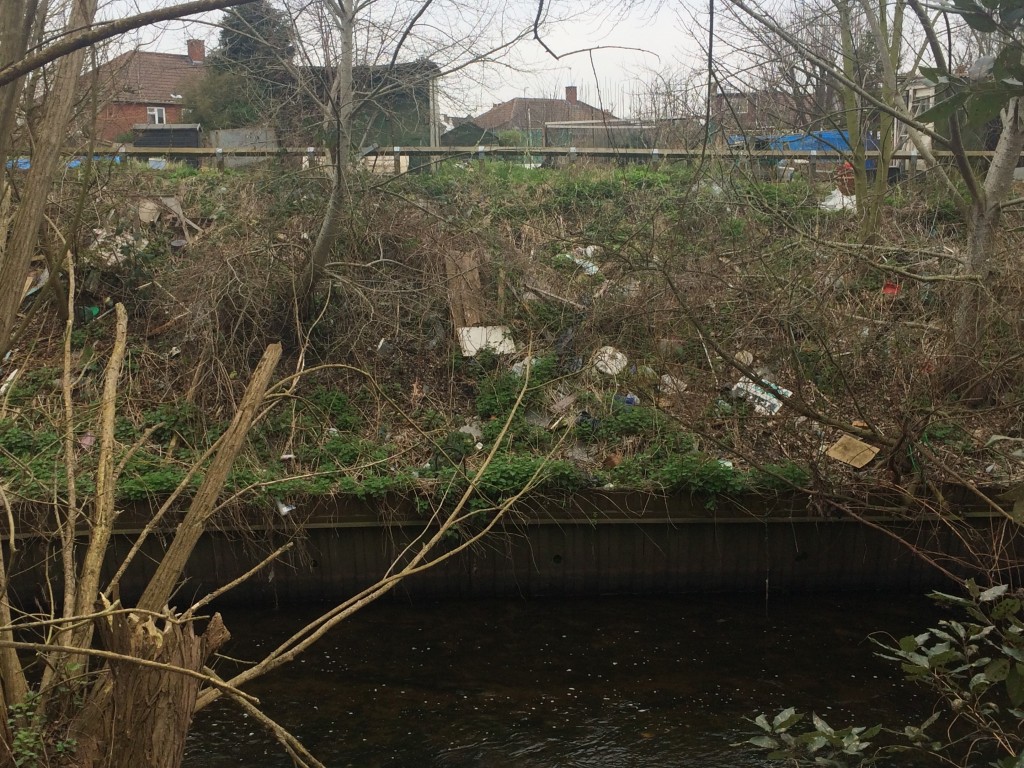 It didn’t take long before the bank support team was overwhelmed with rubbish and we had to gather extra recruits from the litter picking team. 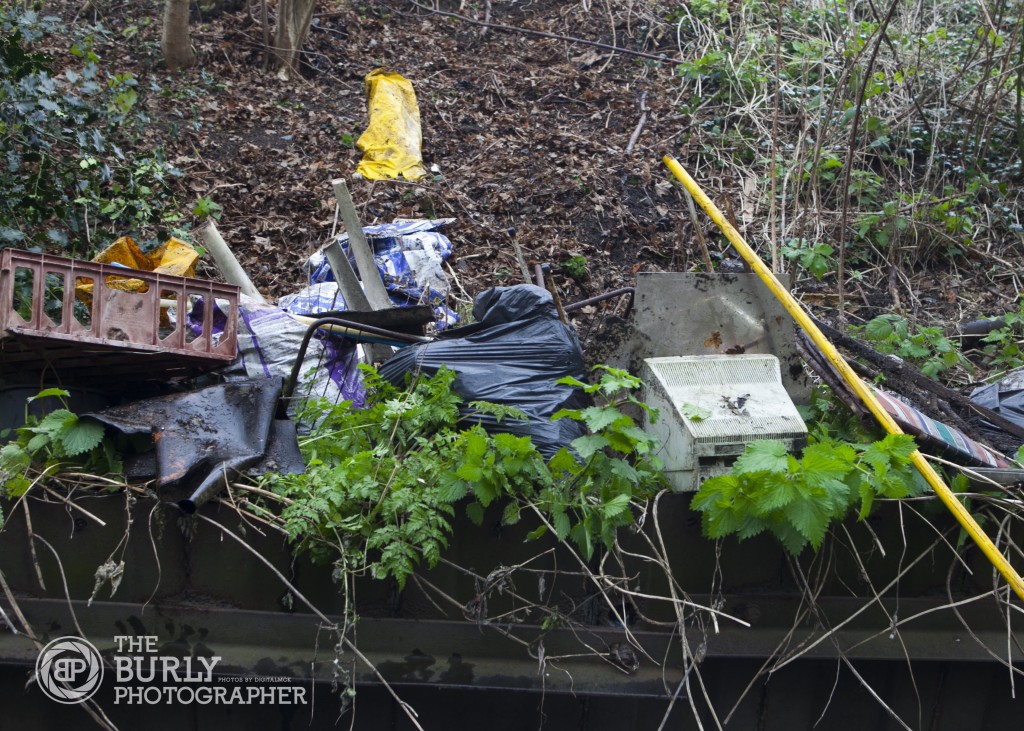 One of the first big finds was a roller. Although very heavy, it was designed to roll and so getting it up the bank couldn’t be too difficult, right? Turns out, yes it could! 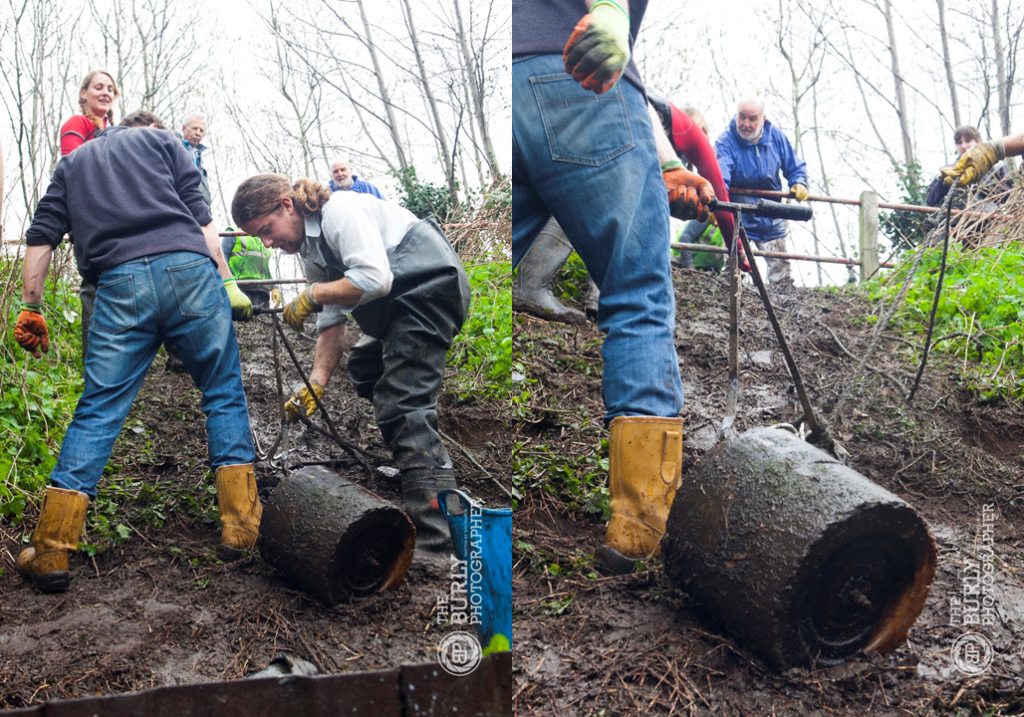 Next, a mattress was found in the Wandle which proved trouble for the waders and bank support alike. Having absorbed so much water and silt, the mattress was extremely heavy and getting it up the bank revetment and then up the steep bank was near impossible. 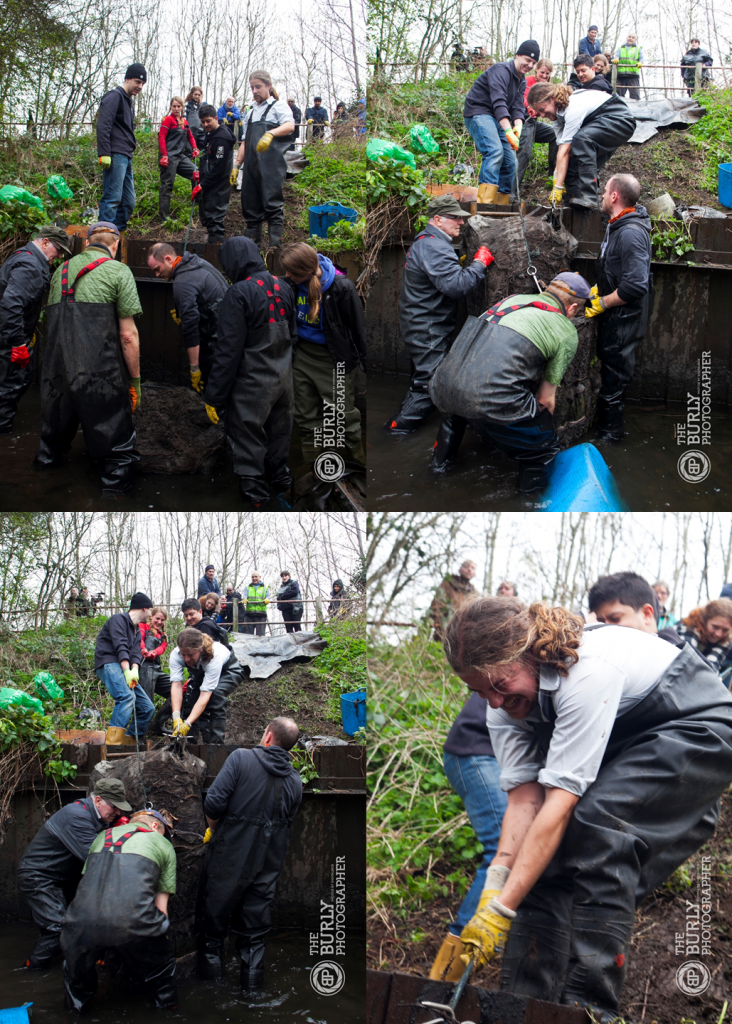 Derek used his magical powers to sense rubbish hidden below the silt. With everyone on the rope, the mystery object was pulled free and the trolley was heaved by the bank. Shame the wheels didn’t work to get it back to the rubbish pile! 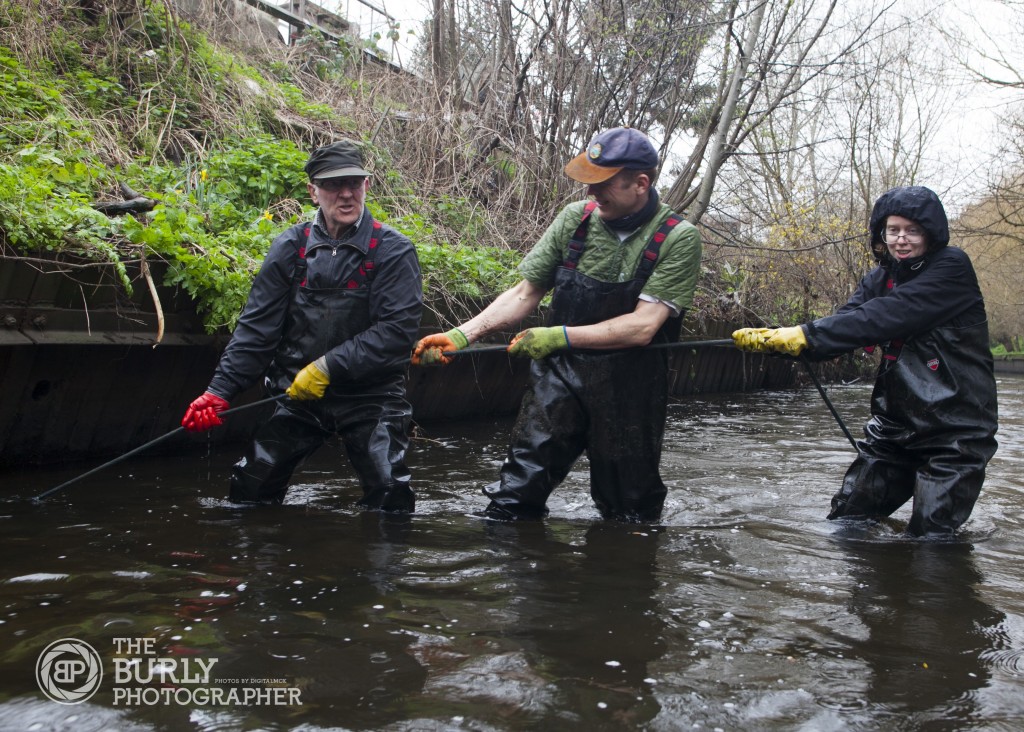 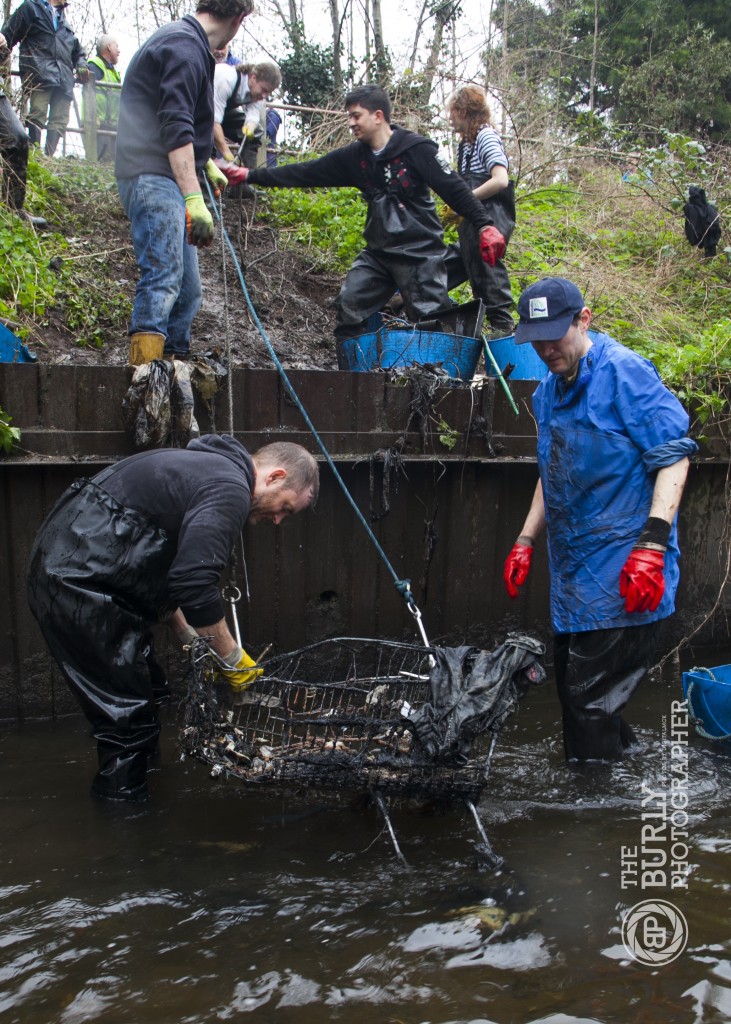 At lunchtime we headed back to the tent for some cake and drink, as well as shelter from the rain. We had some lovely homemade cakes which went down a treat. With the rain not stopping, we decided to get back to the river and finish what we’d started. 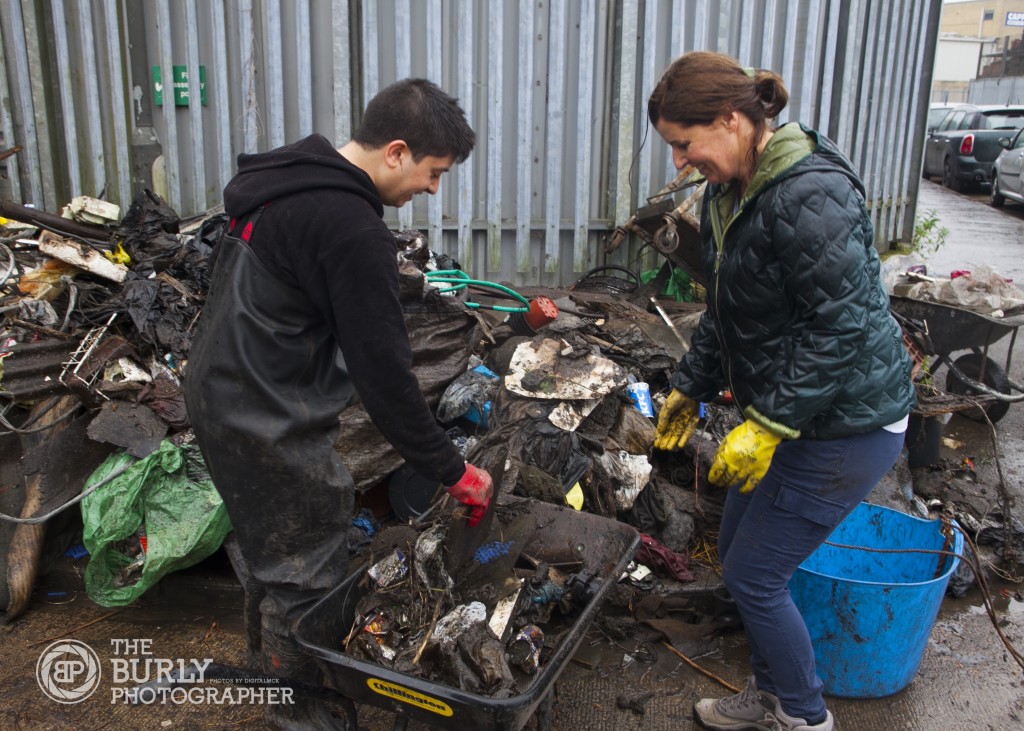 After lunch, Derek found yet another trolley deep under the silt. With several people on the rope, we managed to pull this one free and get it up the steep bank as well. 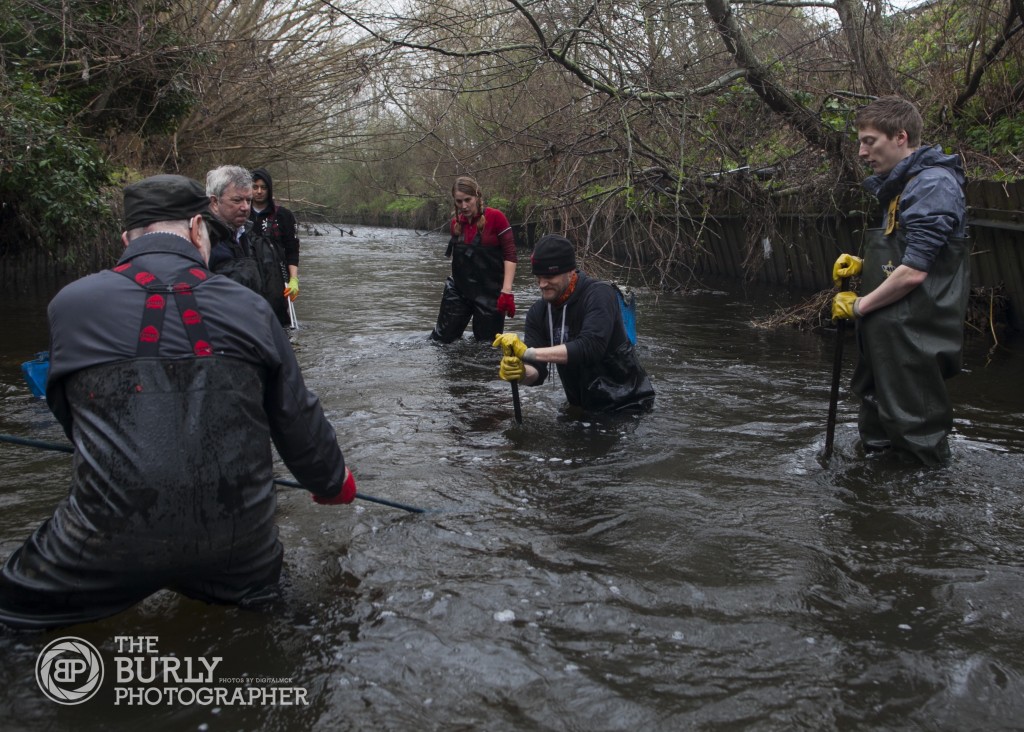 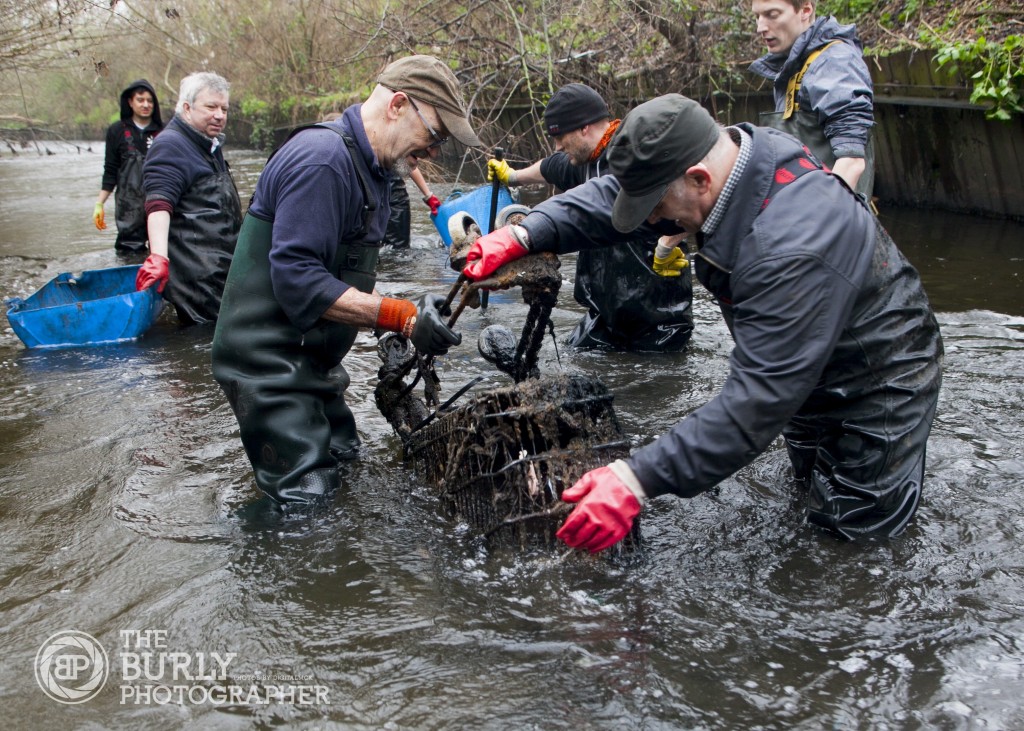 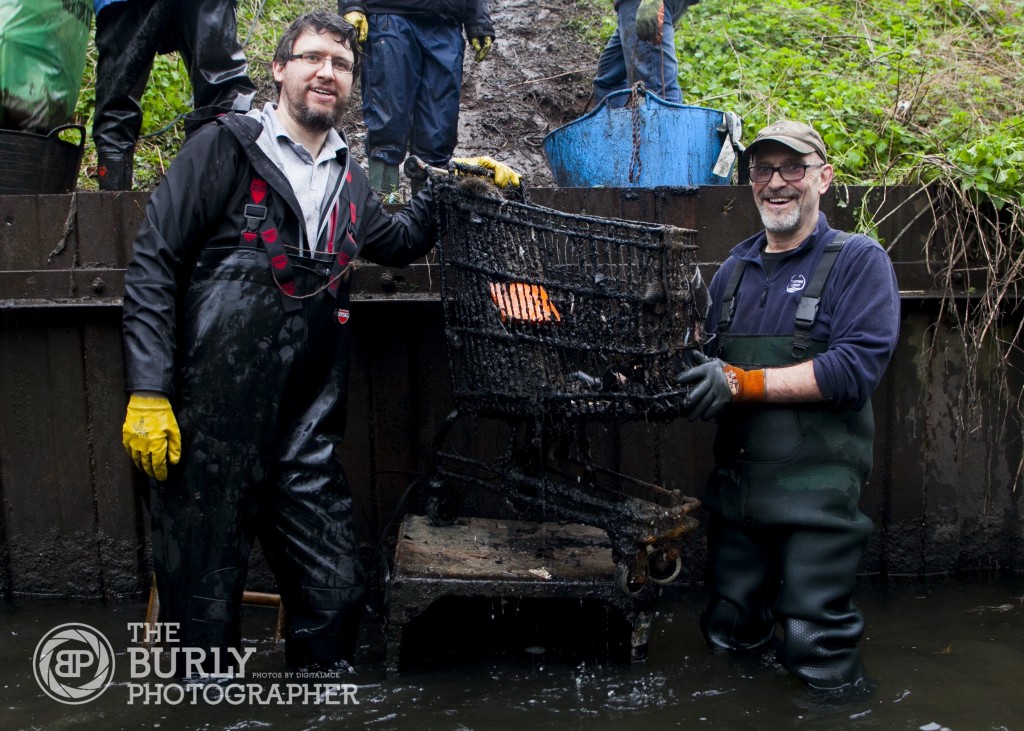 Another challenging find was this metal water tank/safe – full of silt and very difficult to attach the ropes to! 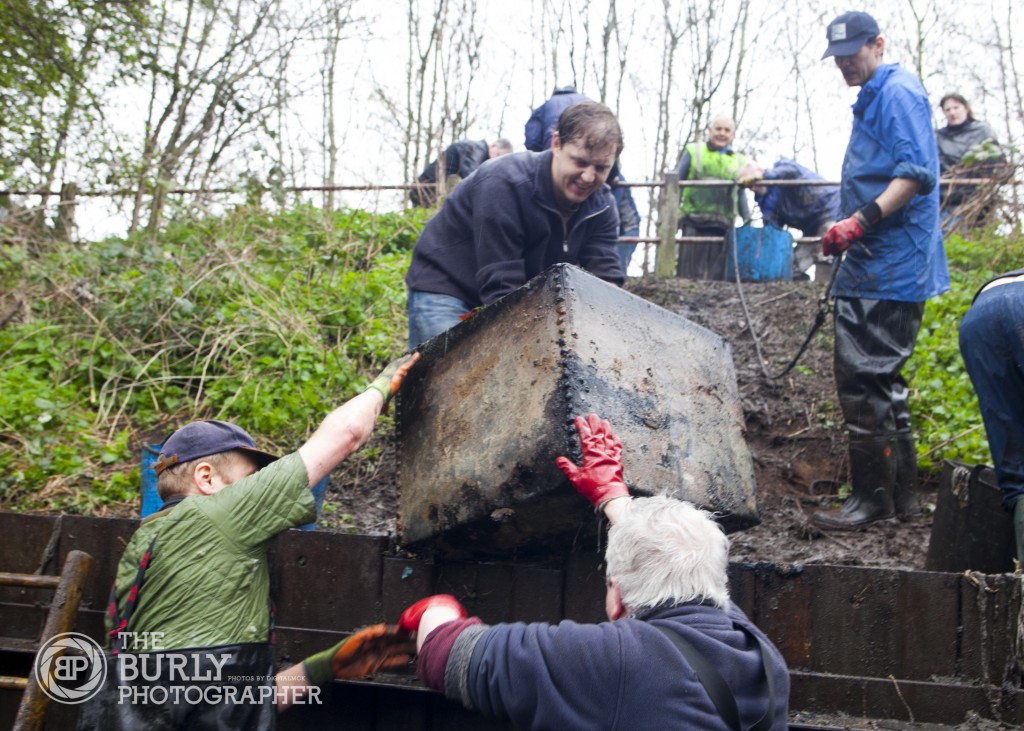 At the end of the day everyone was wet, the rubbish pile was sky high and so we called it a day for another Wandle cleanup. 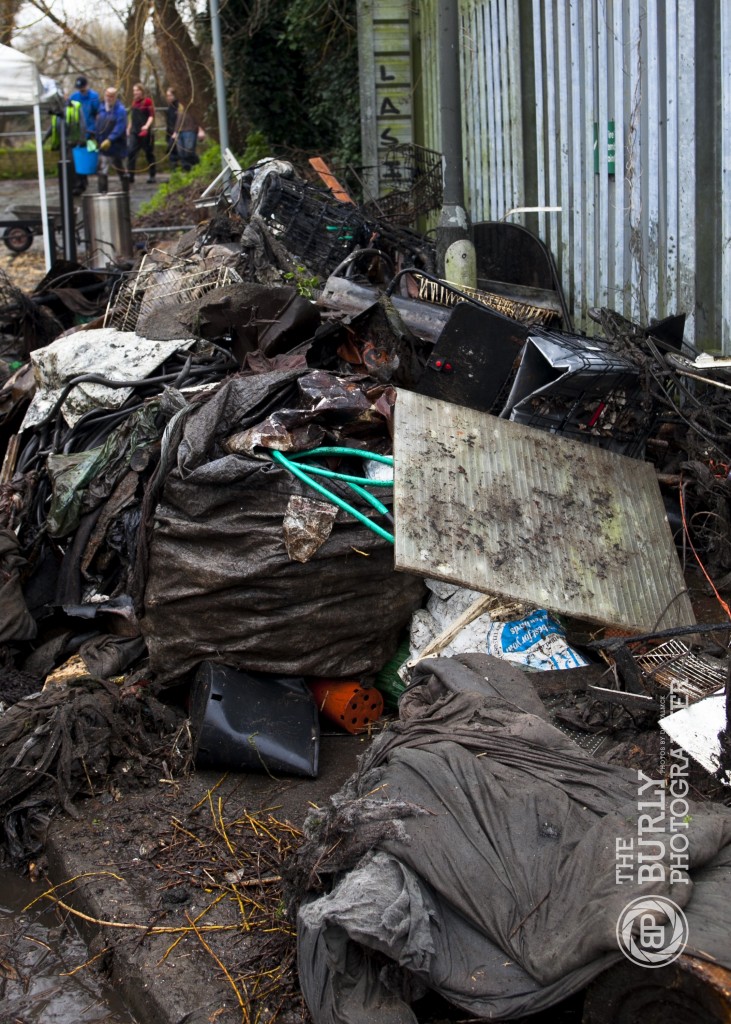 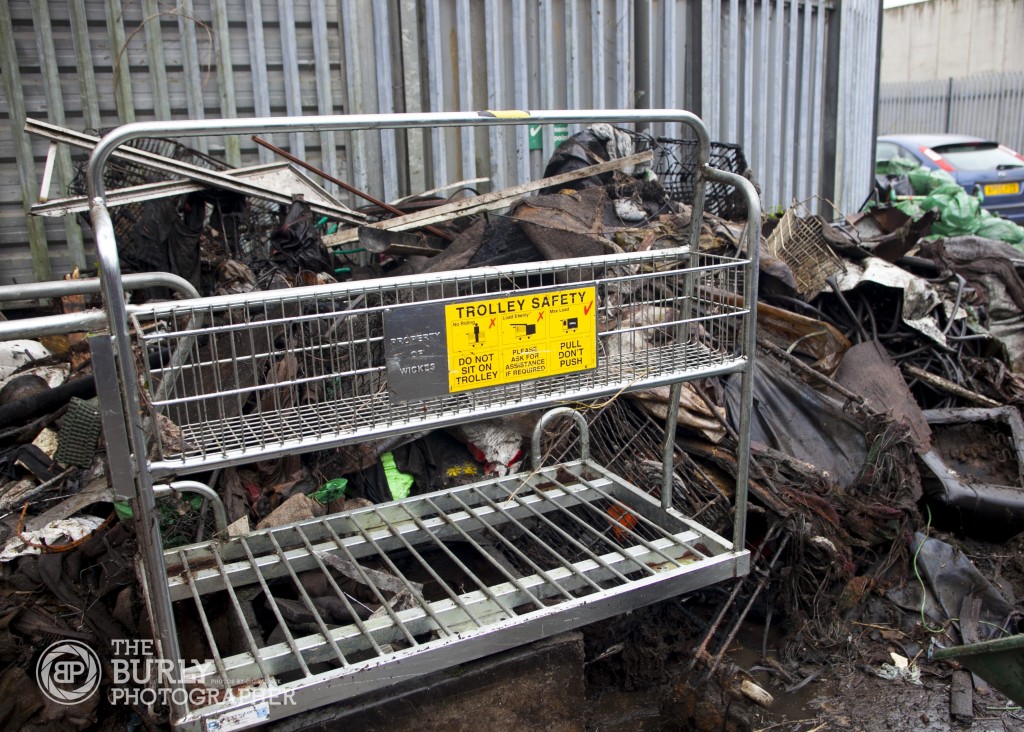 Huge thanks to everyone who helped unpack and pack up the van during the event, Ann for supervising the Event Tent and for baking some treats, Big Yellow Wandsworth for providing free storage space for our equipment and the Waste Team at Merton Council for organising collection of all the rubbish the next day.

We’d also like to say a big thank you to Richard from The Burly Photographer, who came and took some great photos of our event!

So what did I learn from this month’s cleanup?   That if you forget your coat and it rains, a bin bag makes an excellent waterproof. 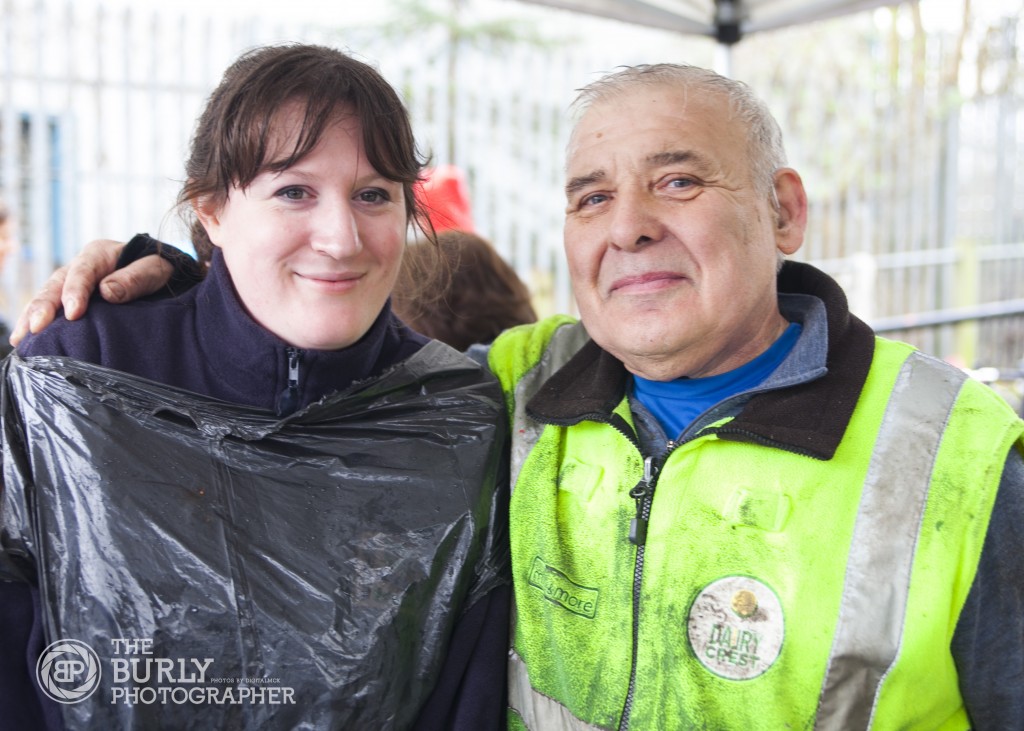