Our Water Quality Officer, Olly, has been having a busy few months working to tackle urban diffuse pollution on the River Wandle.

If you missed the introduction to his work – have a quick read now!

This week, Olly, myself and some lucky volunteers will be installing the next pollution mitigation measure: Mycofilters.

Mycofilters (Mycos for short) are mesh sacks packed full of straw, wood chip and mycelia (the non-fruiting part of fungi). Over time the mushroom mycelia grow throughout the sack and create an expert filtration device. Once placed in the river, the mycelia filter out contaminants from the water which passes through them. 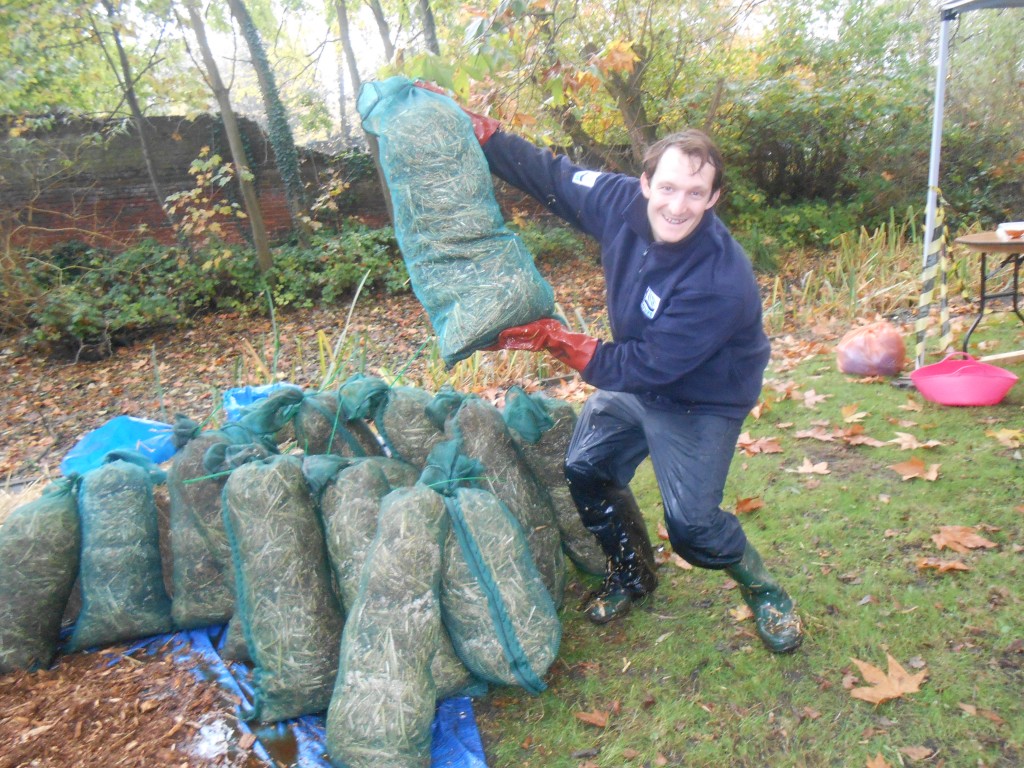 The Wandle Trust has already trialled growing and installing these filters. In November 2014, we held another successful volunteer day to make a further 60 bags with a slightly modified and more robust design.

This week we will be taking these fully grown Mycos and installing them on sites where pipes are potentially polluting the river. The Mycos will be installed securely to ensure there is no flood risk and will be monitored carefully over the next two months to determine their effectiveness.

So if you spot something odd looking close to the river – it is probably a Myco! Please don’t remove them and if you see one in jeopardy – let us know!

A BIG thank you to our Myco-making volunteers from November. Thanks to you we managed to make 6 Mycos in less than four hours! I’d also like to thank our sewing team who took the time to sew up 60 bags for us to stuff full of pollution busting goodness. 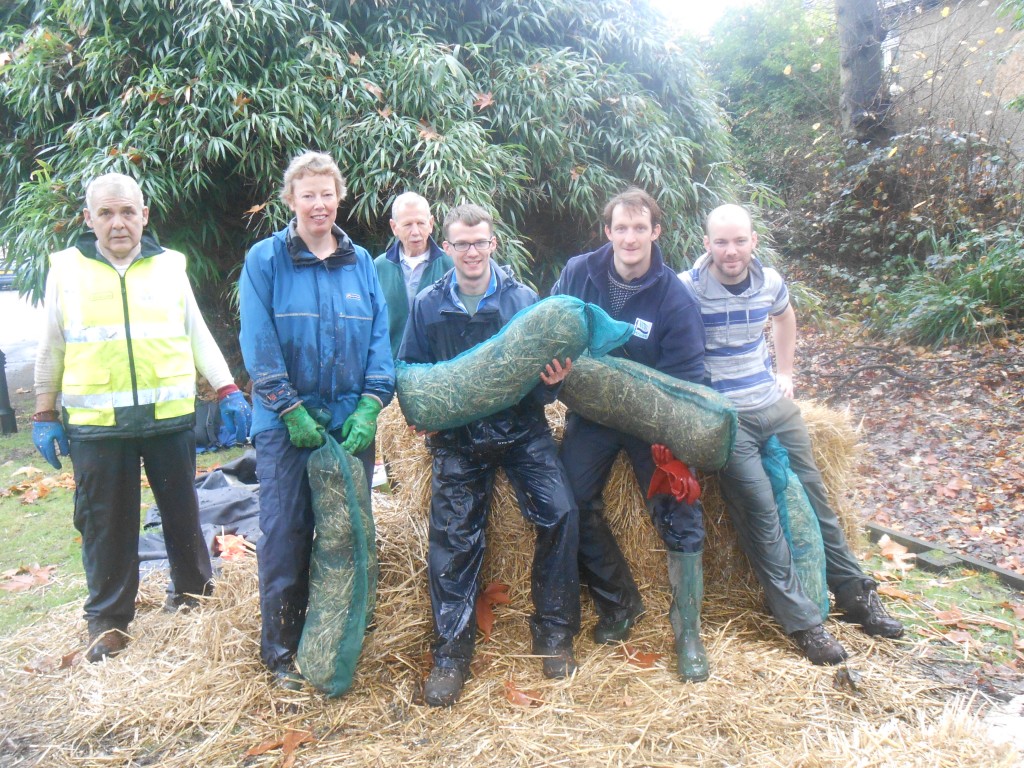 Mycofiltration is the pioneering technique of using fungi to filter out pollutants from water.  First developed in the USA by Paul Stamets, we are trialling it here along the River Wandle for the first time in the UK!  We have put several ‘mycofilters’ around surface water outfalls that drain into the river to capture pollutants such as heavy metals, hydrocarbons, bacteria and excess nutrients and will be monitoring their effectiveness over the coming year.

A mycofilter is basically a hessian sack filled with wet straw and wood chip and mycelium (the non-fruiting part of fungi).  They look a bit like slightly mouldy sandbags, but don’t let that put you off!!  They are doing important work.

Getting to the point of being able to install mycofilters along carefully selected study sites by the Wandle took several stages…here’s what we did in a quick run-through: 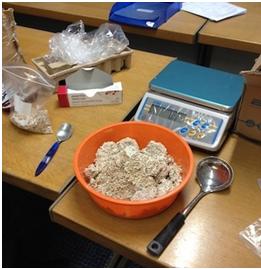 40 kg of mushroom spawn was ordered from a specialist UK supplier and carefully weighed out to the correct portions needed per hessian sack. 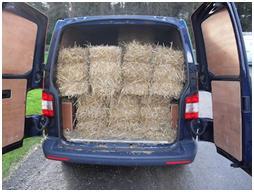 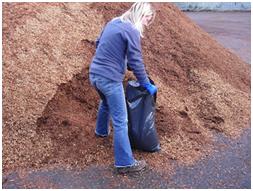 Then the first of three workdays was held at Sutton Ecology Centre to make the mycofilters themselves. 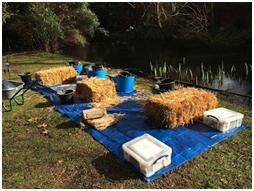 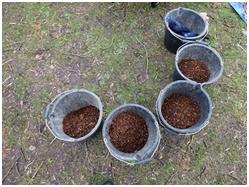 All the materials needed: straw, wood chip, hessian sacks, mycelium spawn and a plentiful supply of fresh water were laid out as an attractive buffet (!) for volunteers to build 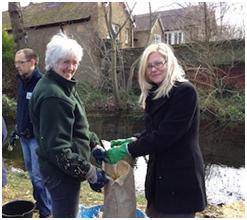 Volunteers worked in pairs – one to hold the bag open and the other to scoop in the materials. 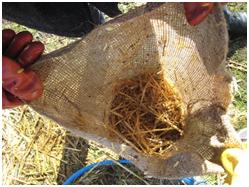 The ingredients were layered like a special lasagne: first a good layer of wet straw… 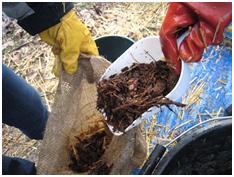 Then a scoop or two of wood chip… 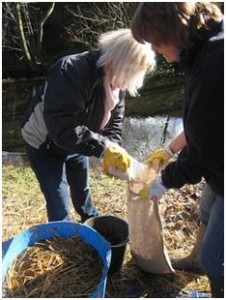 Then a generous sprinkling of mycelium was added and the layering process repeated, until the bags were tightly packed and full. 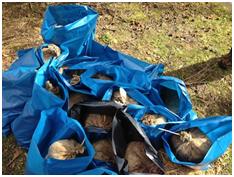 The finished sacks were put into rubble bags to protect them and volunteers took a bag or two each home with them to develop in their gardens over the next few weeks. 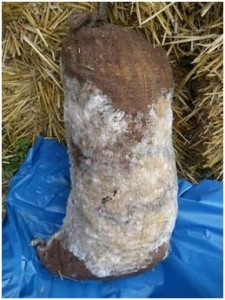 After five weeks typically, the mycelium had grown throughout the sacks and was visible on the outside as a white feathery network of filaments – they were ready to install!

Three more workdays were held to invite the volunteers back with their sacks and to install them at the study sites by the river. 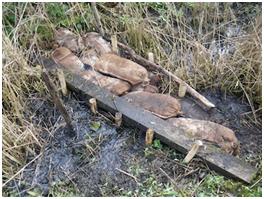 The first site tackled was Bennetts Hole Local Nature Reserve in Mitcham, where pollution was entering the site via pipes from a neighbouring Industrial Estate feed to a reedbed. 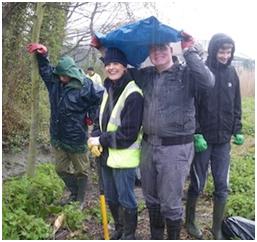 Despite a hailstorm during proceedings, no one’s ardour was dampened and three sets of installation were completed successfully. 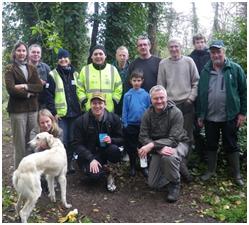 Thanks to everyone who braved the inclement weather! 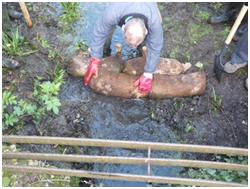 Despite the weather, there was no let up and installations were then carried out at the Mill Race in Grove Park 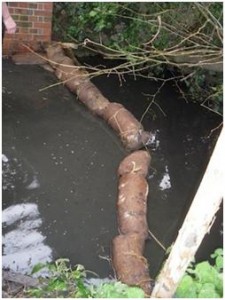 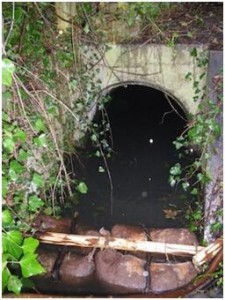 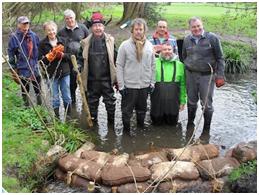 The mycofilters will now be monitored regularly, with water and silt samples sent away for analysis.  Watch this space for further updates!

If you notice the mycofilters have been disturbed or removed at any site, please let us know.

Thanks to everyone who has worked so hard to help Claire with this project; it has been great fun and you can feel proud of the fact that you are all conservation pioneers!