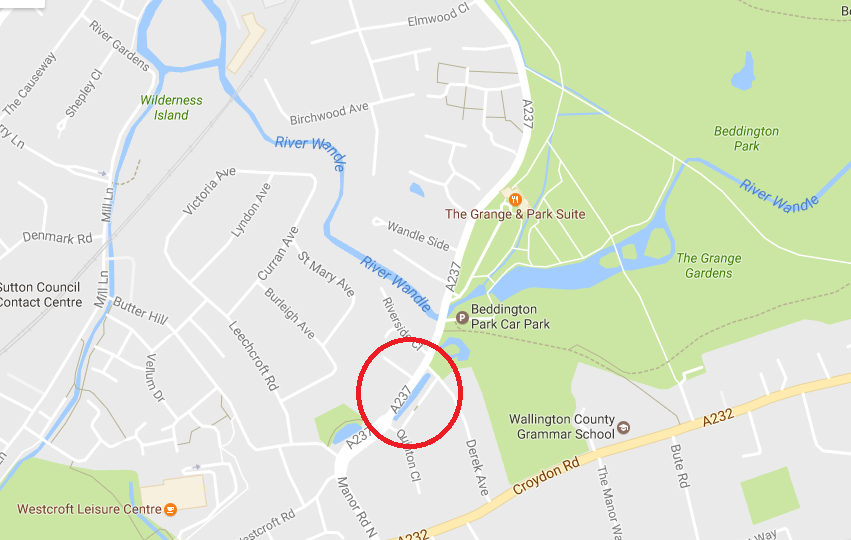 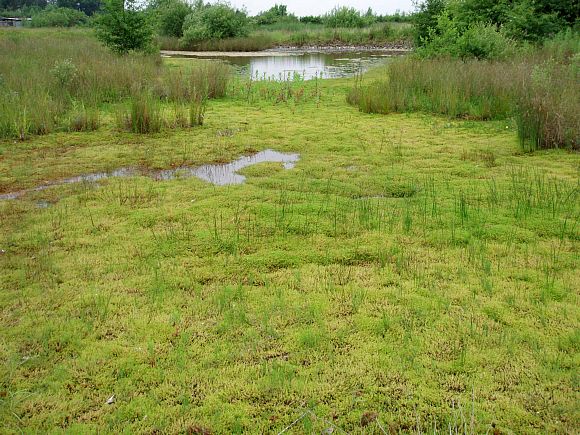 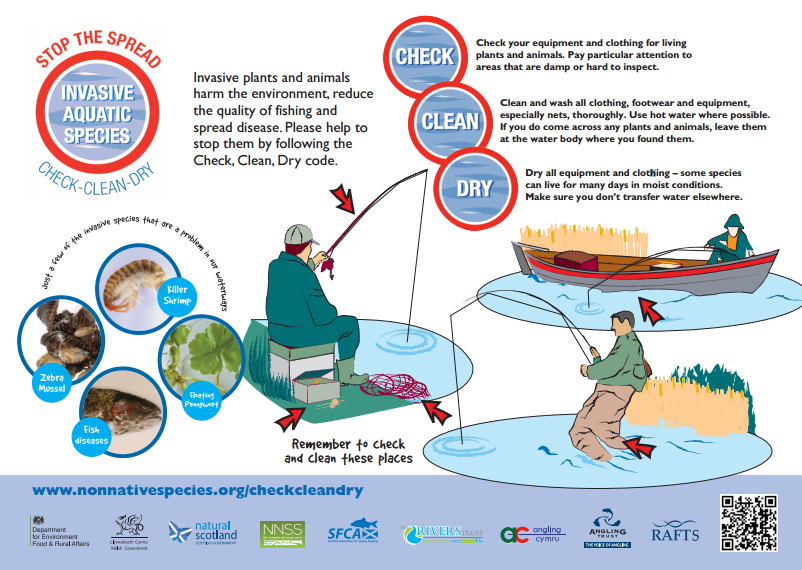 The one with a Limerick…

Did you know last week was National Limerick Day? Well, if you didn’t, to get this blog started here is a Wandle limerick just for you:

But on with the cleanup…

As May is the start of Himalayan balsam season, our cleanup for the month focused on Beddington Park, with our usual volunteers joining forces with our Invasive Non-Native Species (INNS) teams: the River Rangers and the Hit Squad.

On the Wandle, Himalayan balsam is widespread and is not great news for the river. As part of our Wandle Invasive Species Project, we have been working with our River Rangers and Hit Squad to map the distribution of the plant on the river, and plan out action to work towards its eventual eradication.

Beddington Park, and Richmond Green just upstream, are considered the “source” of Himalayan Balsam for the Wandle, sending seeds downstream to colonise new sites, and are therefore priority areas to target.

On a sunny Sunday morning we were joined by 58 volunteers, including a local scouts group and our INNS Officer, Alan, with his trusty sidekick, Pepper the dog. After our Health & Safety briefing, we divided into two teams to get started: the cleanup crew and the balsam bashers.

Alan led the balsam bashers. Having worked on the site last year, Alan knew where the balsam would be and took a team of volunteers to remove every single plant.

Meanwhile, the cleanup crew got started on the river. The waders headed upstream from Church Lane towards Richmond Green and it wasn’t long until two trolleys were found. 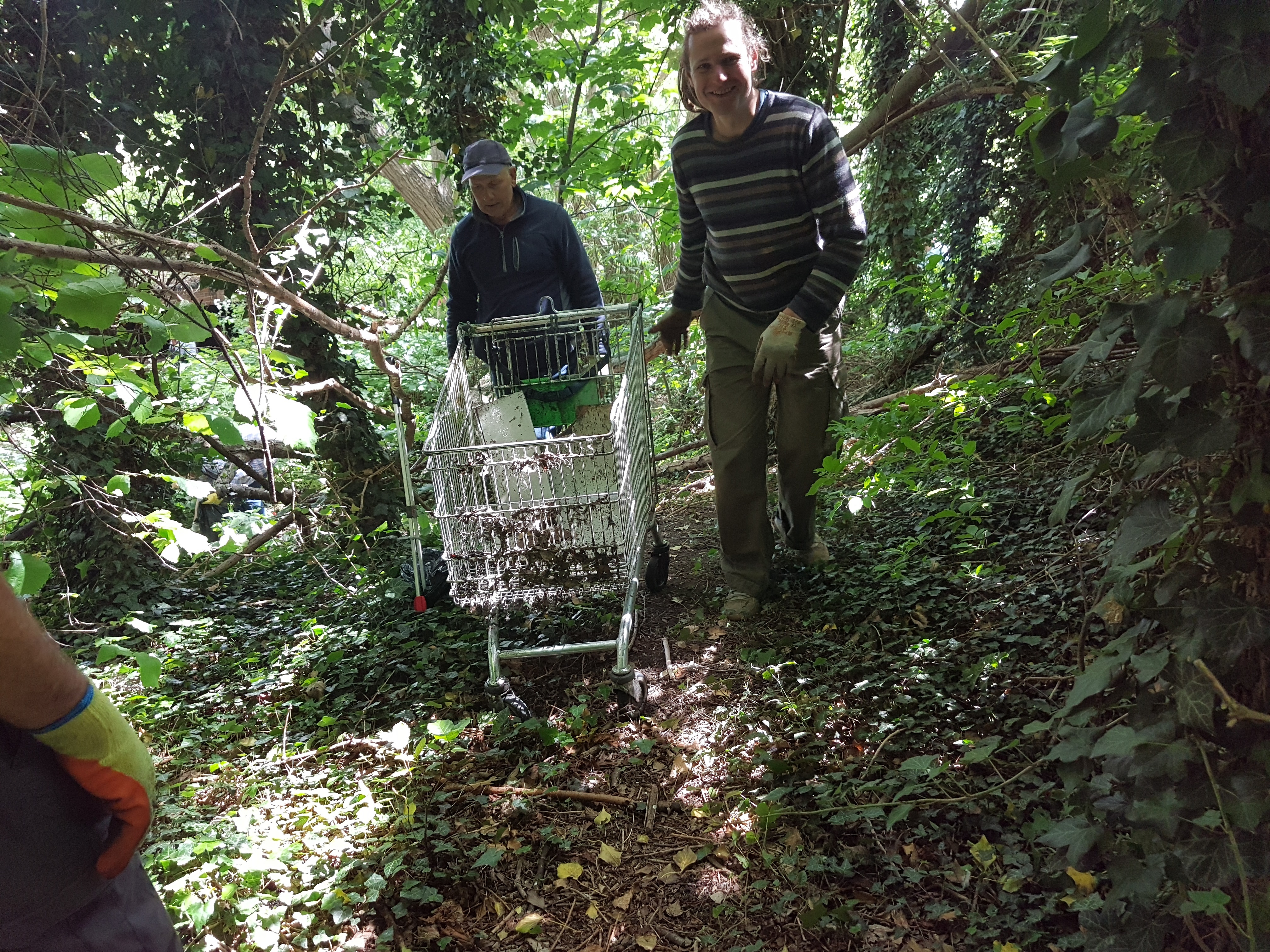 And then not much longer until another two were discovered! 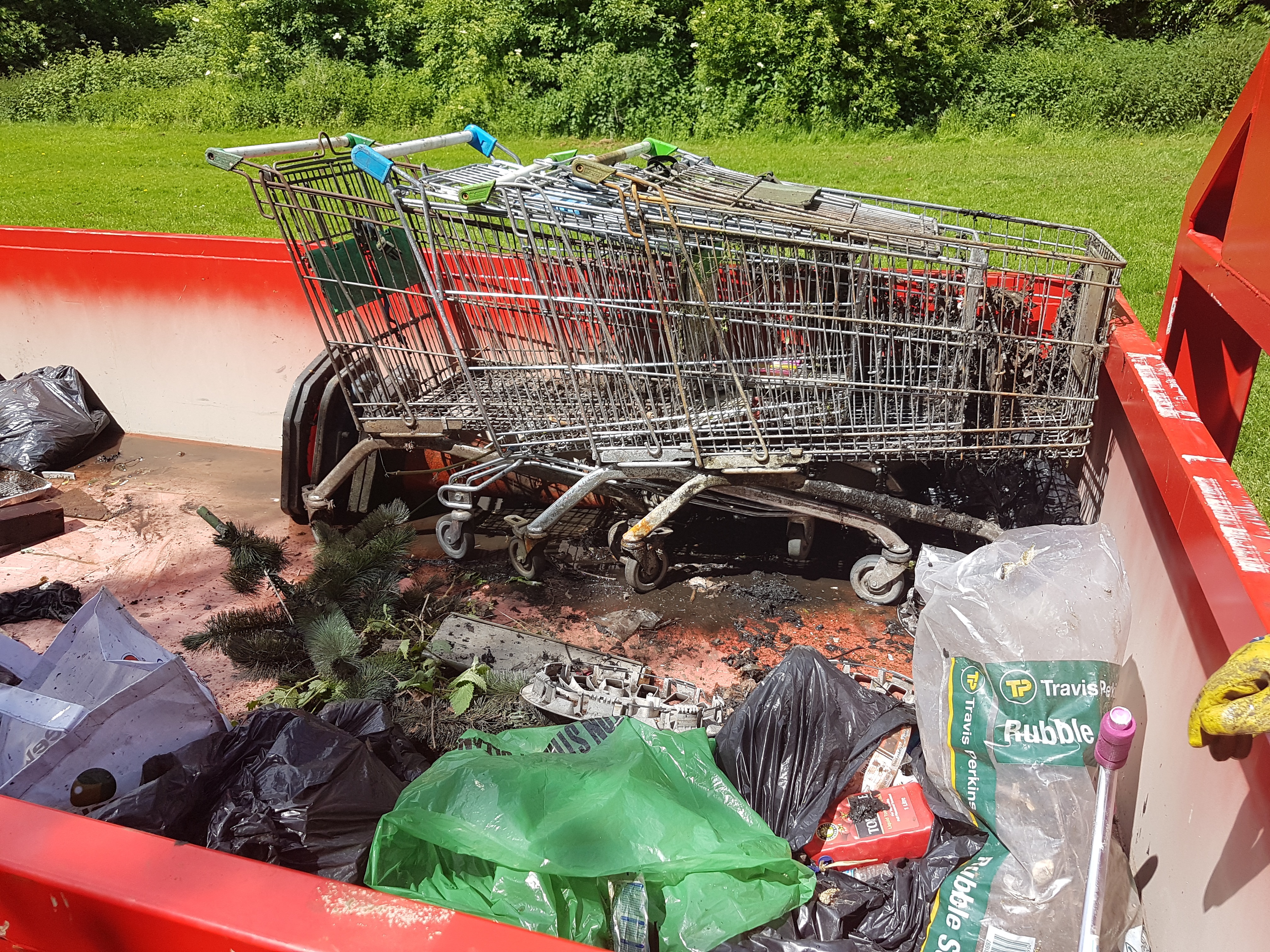 While working up the river, the cleanup crew kept an eye out for any Himalayan balsam growing on the banks of the Wandle, removing each plant as it was discovered. 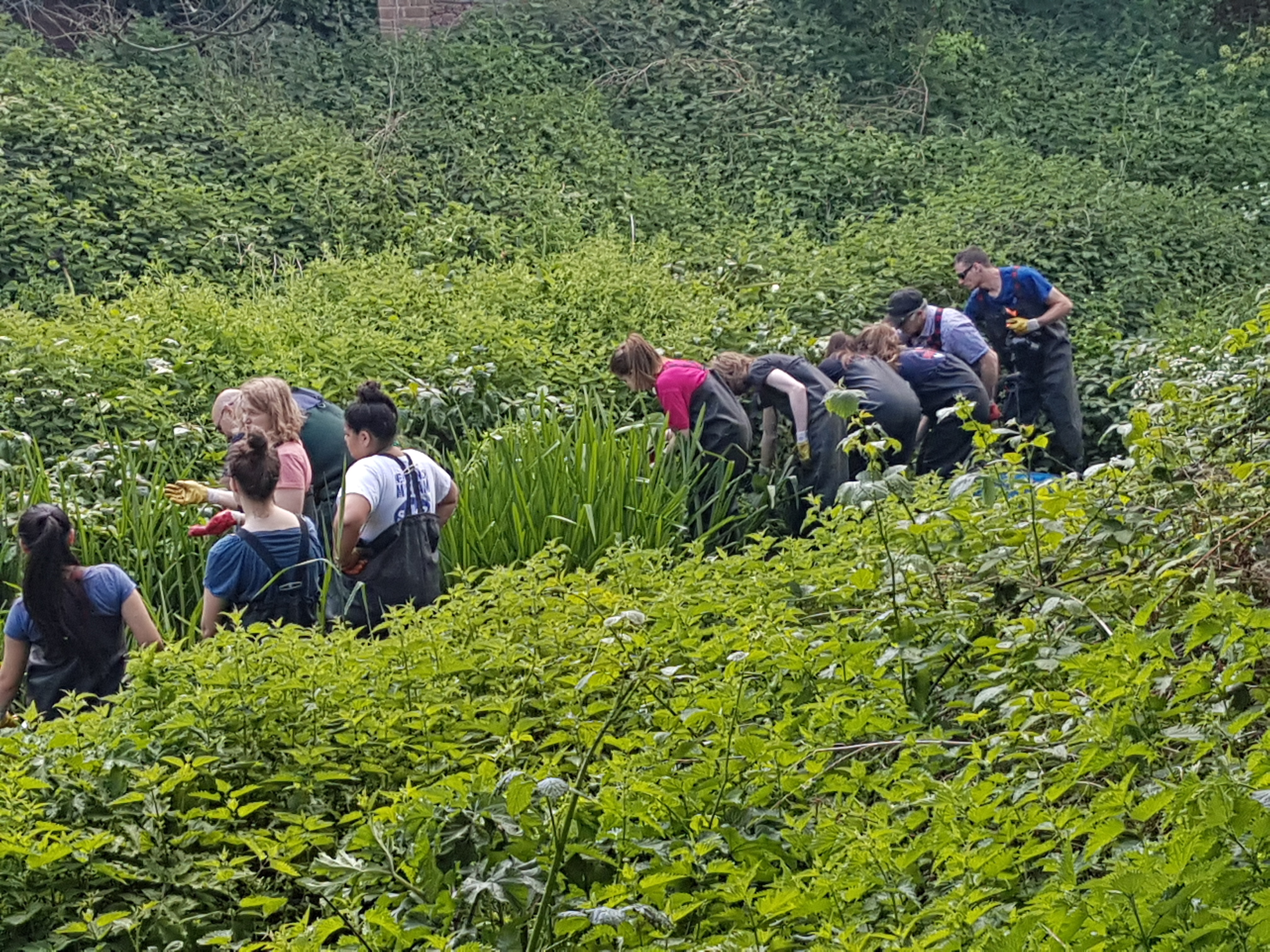 In no time, we had made it to the weir and started emptying the trugs of rubbish into wheelbarrows. 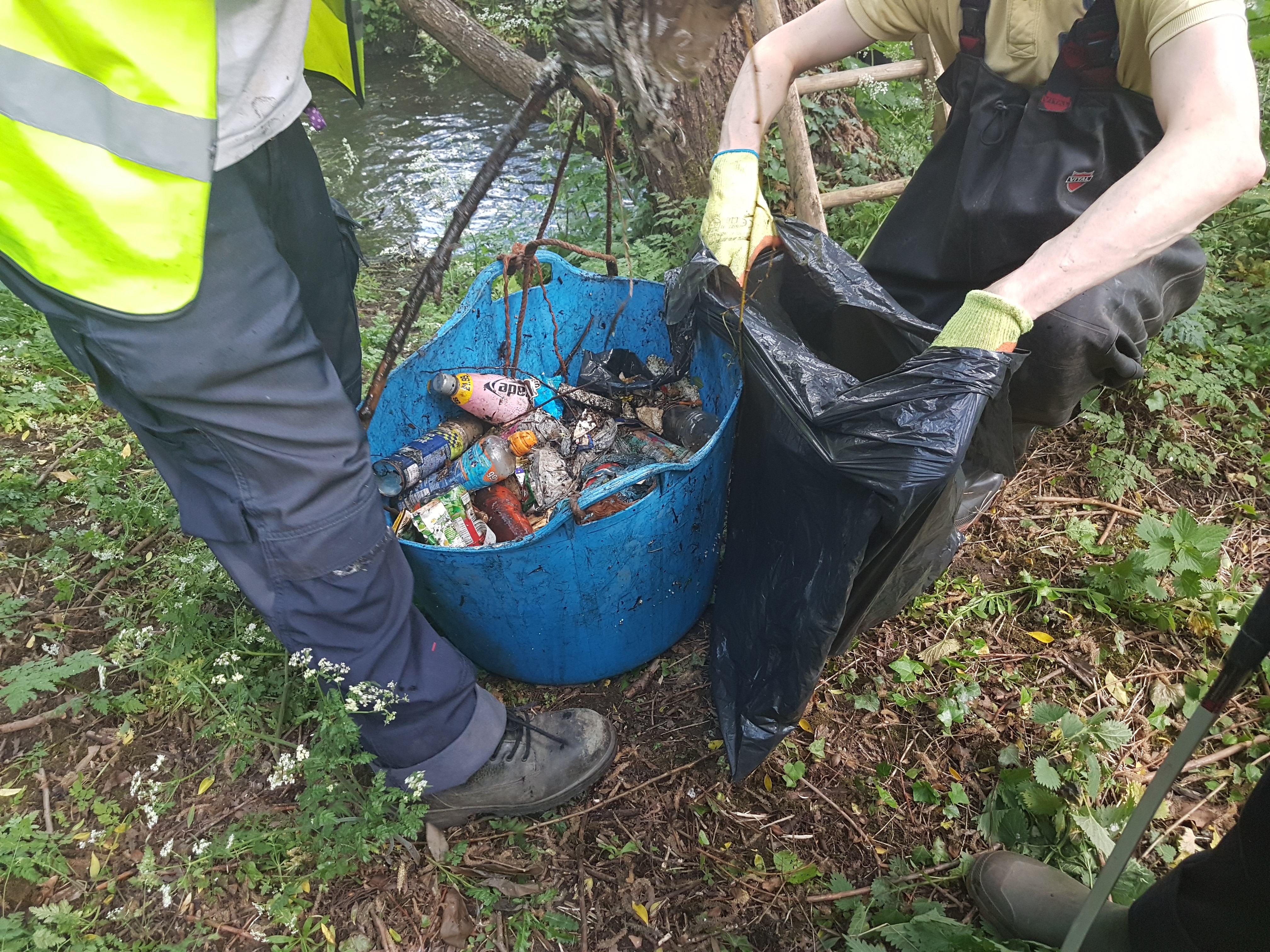 Andy and Dave then led an “expert” team over the weir all the way to Beddington Lane to clean and check for balsam on a stretch we are usually unable to access.

We still had 40 minutes until lunch, so the rest of us headed back to the tent, got back in the Wandle and headed the other way to clean the river inside the park. It was close to spotless with only the odd can or bottle! 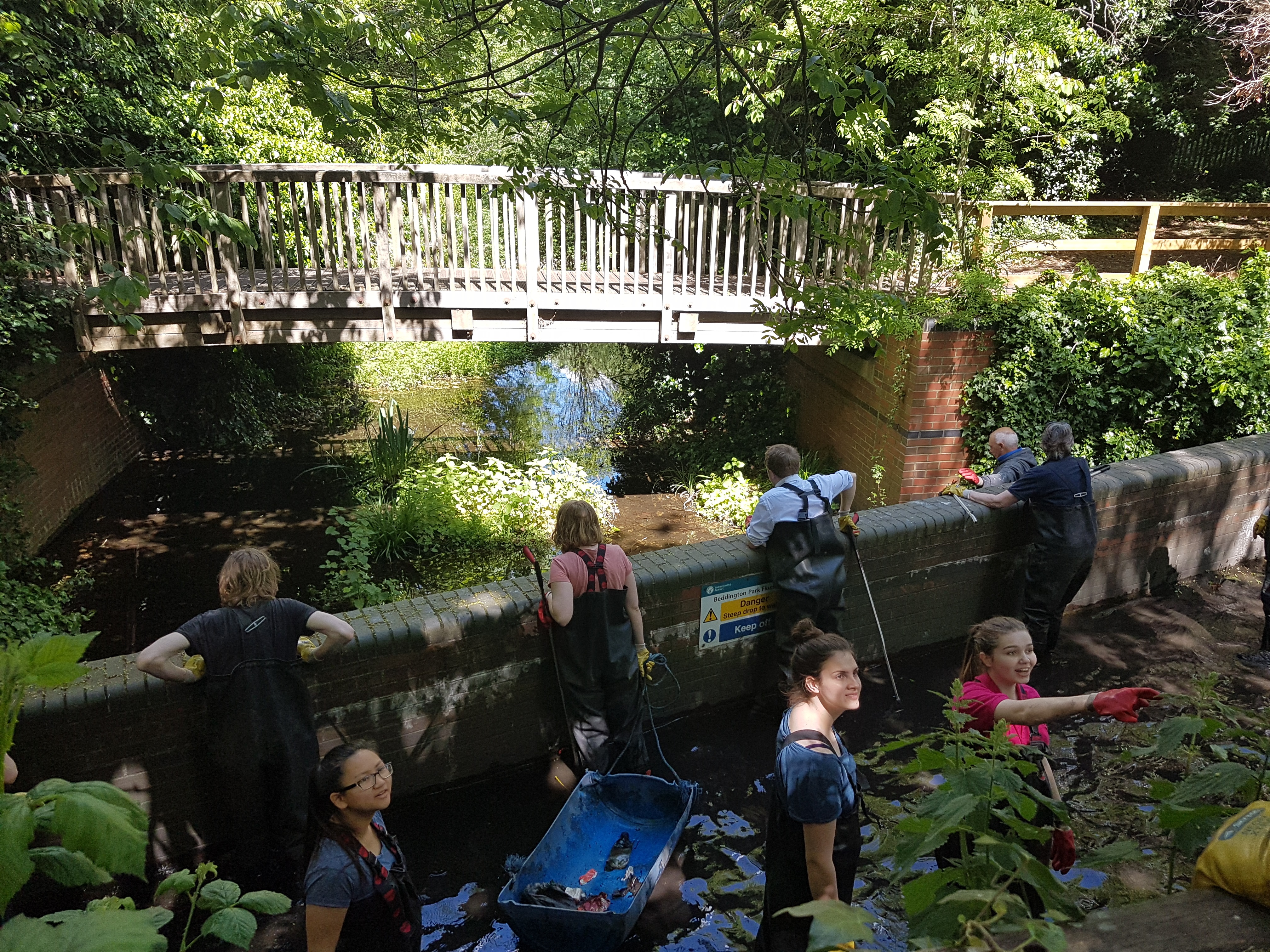 By lunchtime, the balsam team had finished, and the cleanup crew were in need of a drink. We all gathered back at the tent to have lunch and enjoy the sunshine.

After a longer lunch than usual, Alan took the Hit Squad (our team of volunteers trained in the management of Invasive Non-Native Species) to the small pond on London Road, just outside Beddington Park. Here there was some floating pennywort to remove as part of the Wandle-wide battle against the very invasive aquatic species. A rather terrifying discovery however, was the presence of New Zealand pigmyweed (Crassula helmsii) in the pond as well – photographs and samples were taken to confirm but this aquatic plant could cause real problems for the Wandle. 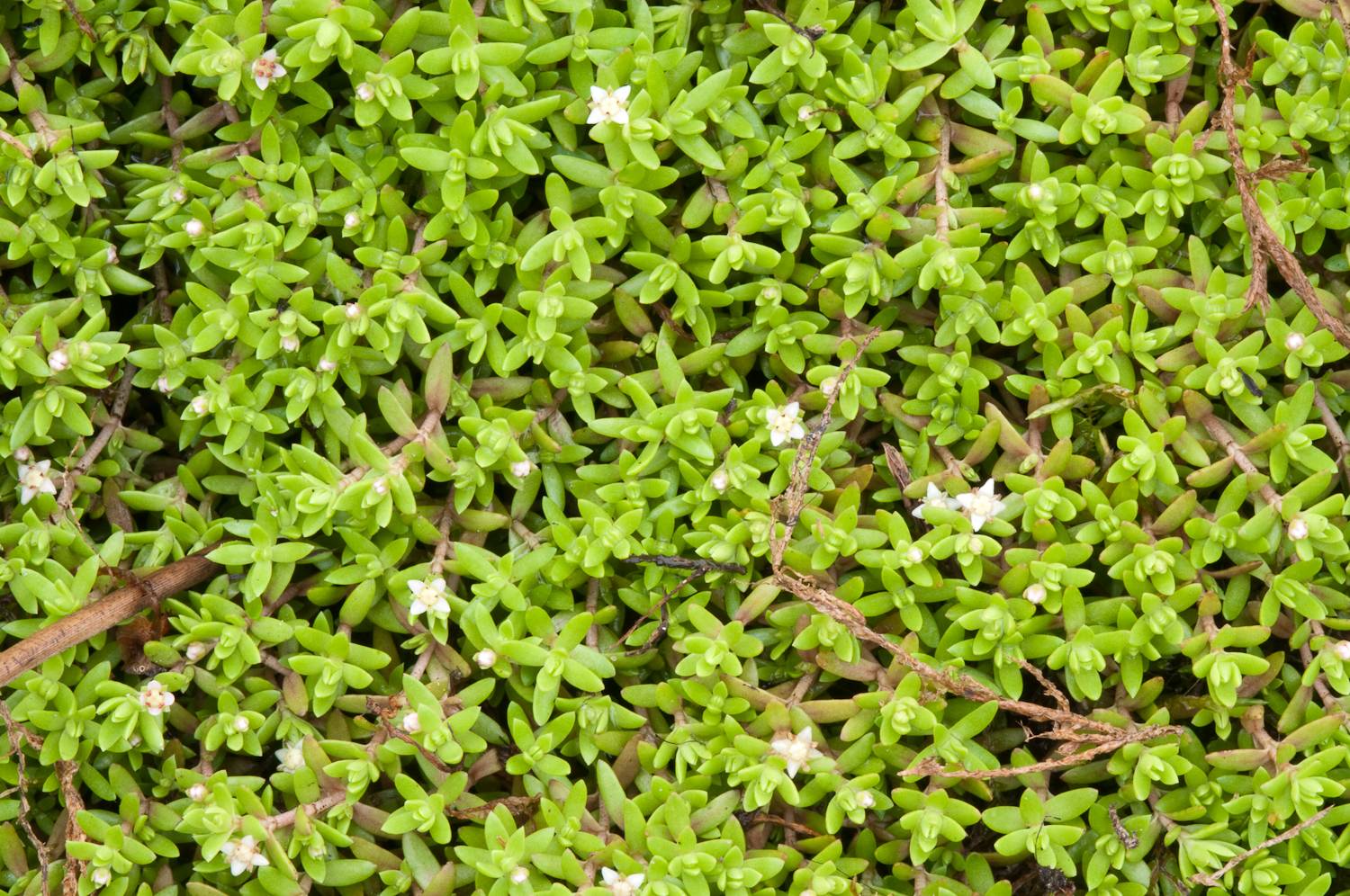 The rest of the waders got back in the Wandle and finished off the last 100 m in the park, finding an extra 3 or 4 bags of rubbish. 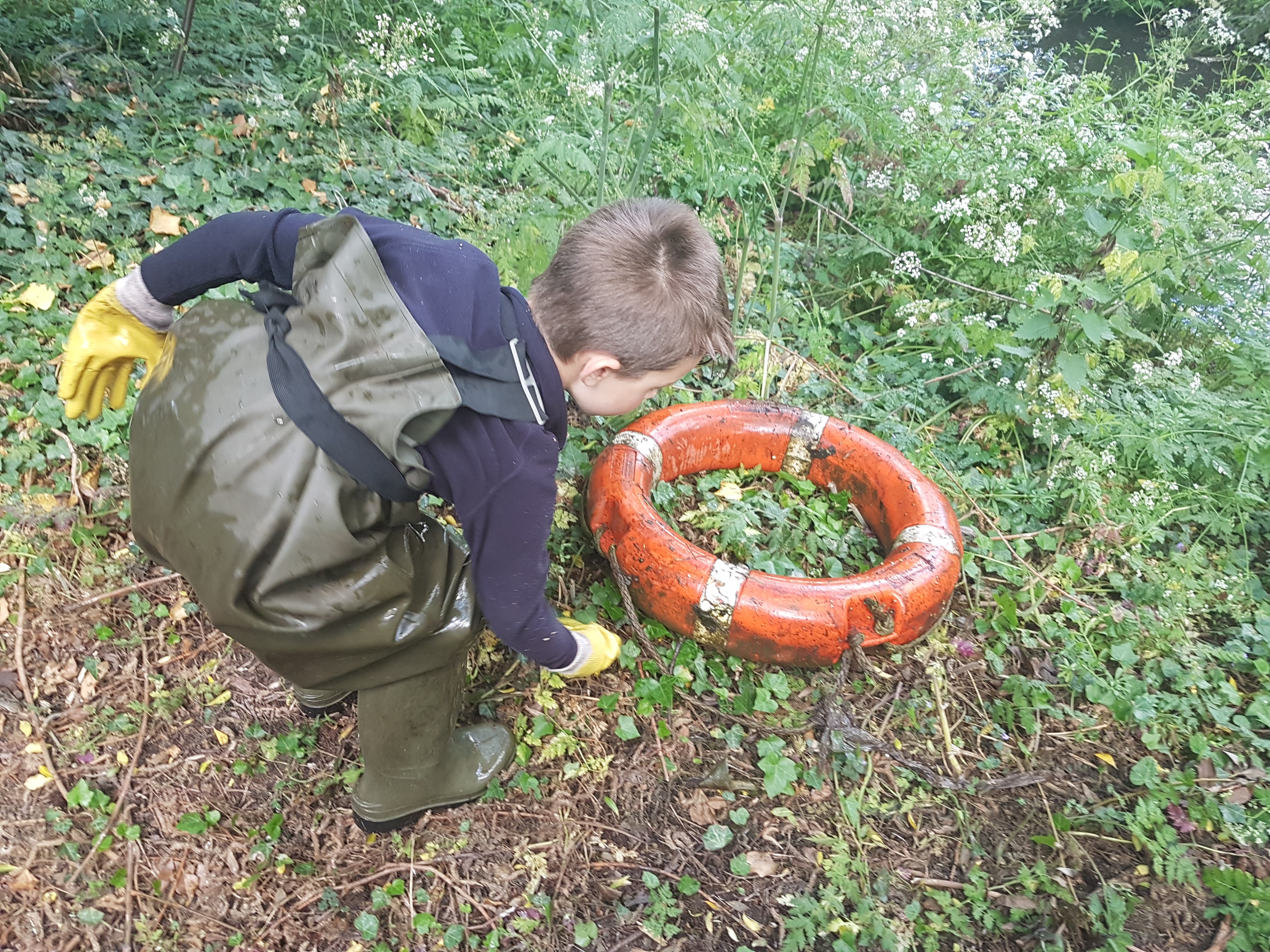 It was then time to check the skip was packed, and the van, and then all head home for a nice cold beverage. 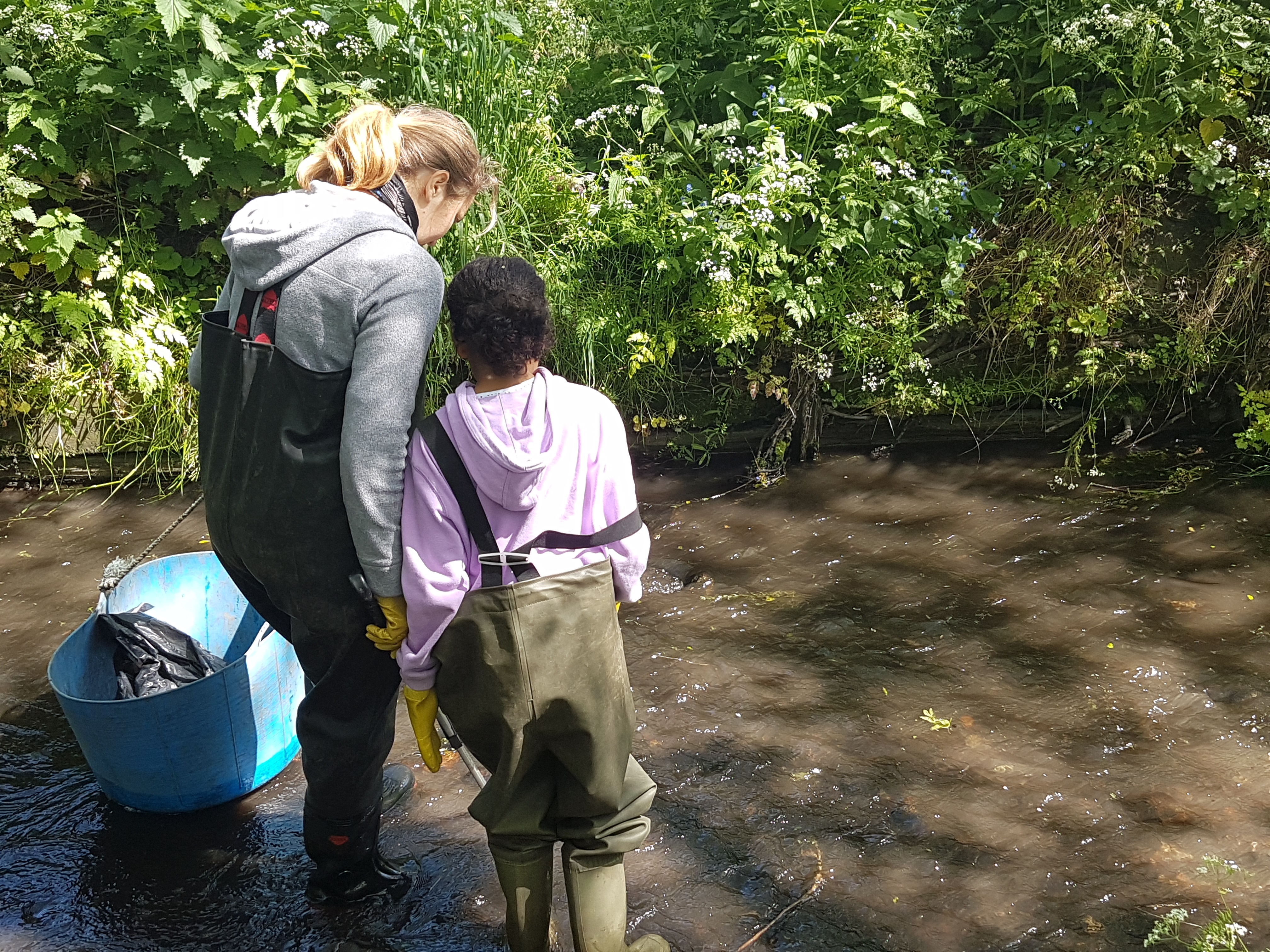 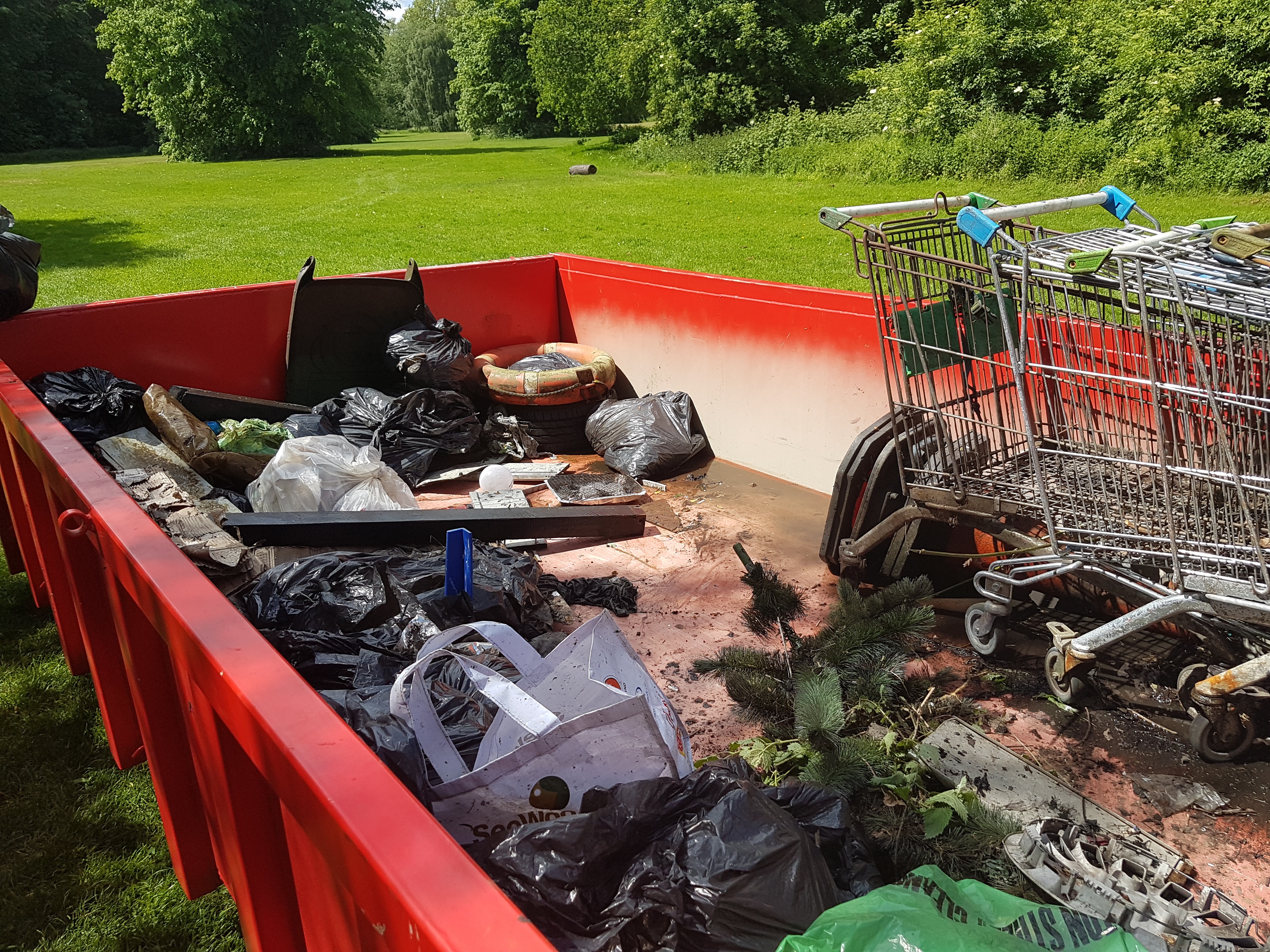 Huge thanks to local volunteer Jackie for kindly funding this event, Sutton Council for purchasing some much needed litter pickers for us, everyone who helped unpack and pack up the van during the event, Rosie for supervising the Event Tent, Rosie and Alan for helping me back at the garage, Ann for baking some treats, Big Yellow Wandsworth for providing free storage space for our equipment and the Parks Team at Sutton Council for organising collection of all the rubbish the next day.

So what did I learn from this month’s cleanup? The difference between coconut water and coconut milk! 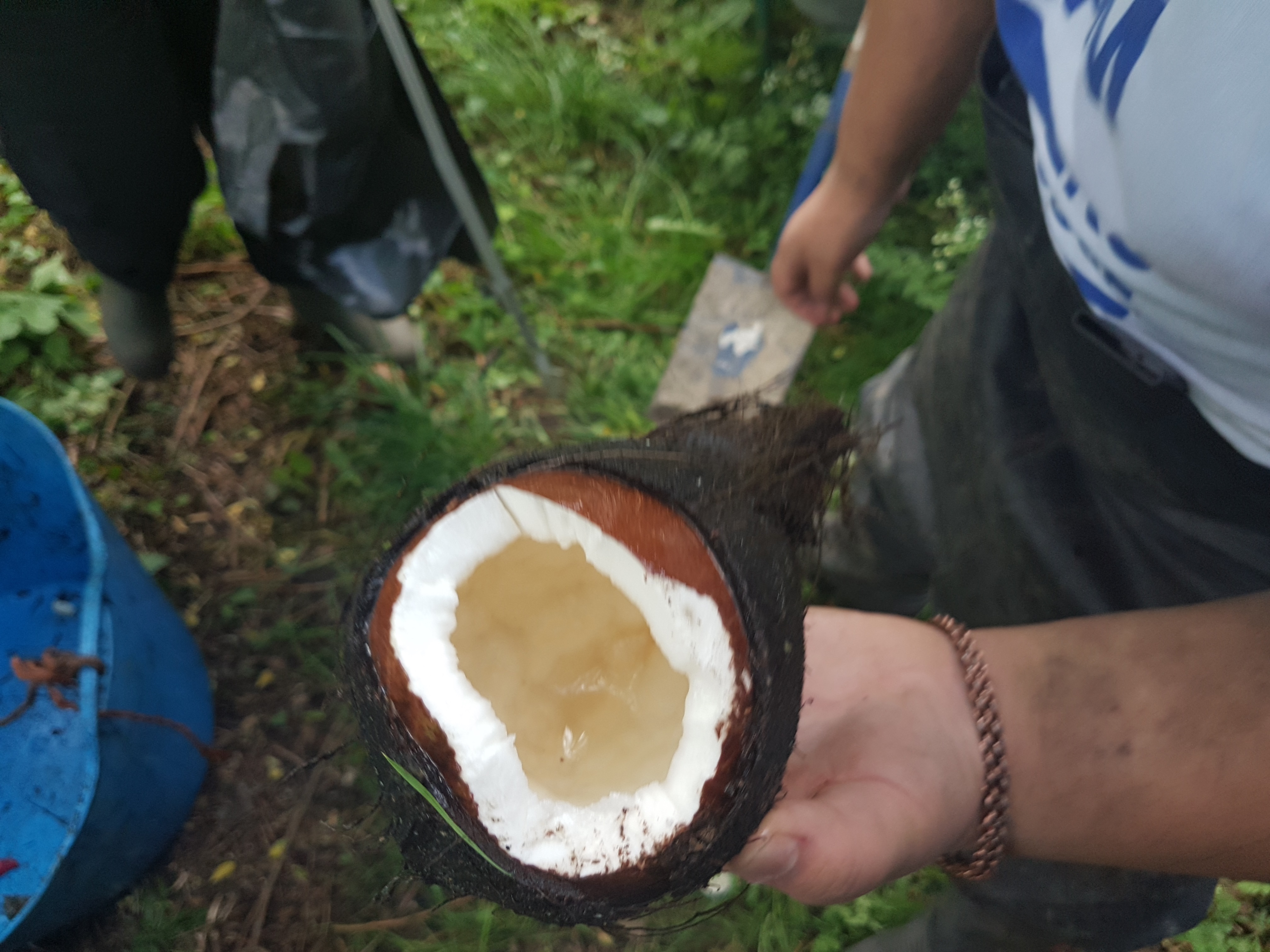