The one with a record number of people

On a sunny, September morning 85 volunteers gathered at Wandle Meadow Nature Park on North Road in Merton for another Wandle cleanup.

Why so many? Well our numbers were larger than normal we were joined by 25 fresh recruits from the Richmond International University. We were also lucky enough to have our ZipCar team again from last year, no floating pennywort for them to tackle this time though. 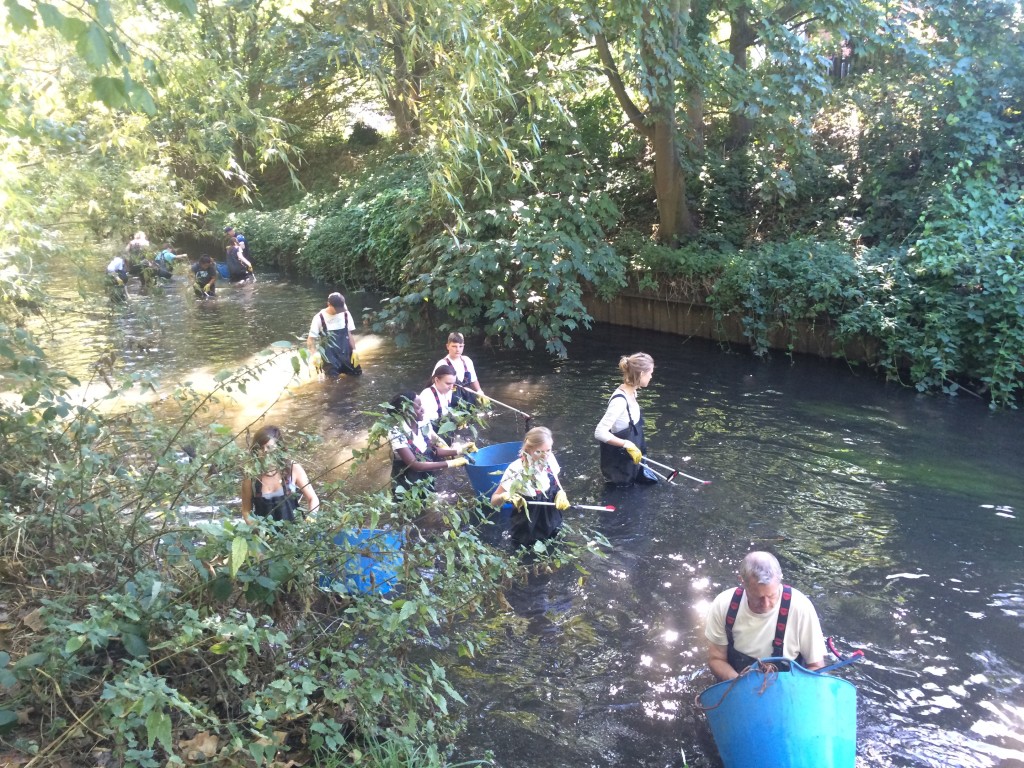 After the safety talk, 85 of us got to work. We had a large wading team which headed right to the end of the park as with so many people we were sure we could cover the distance. 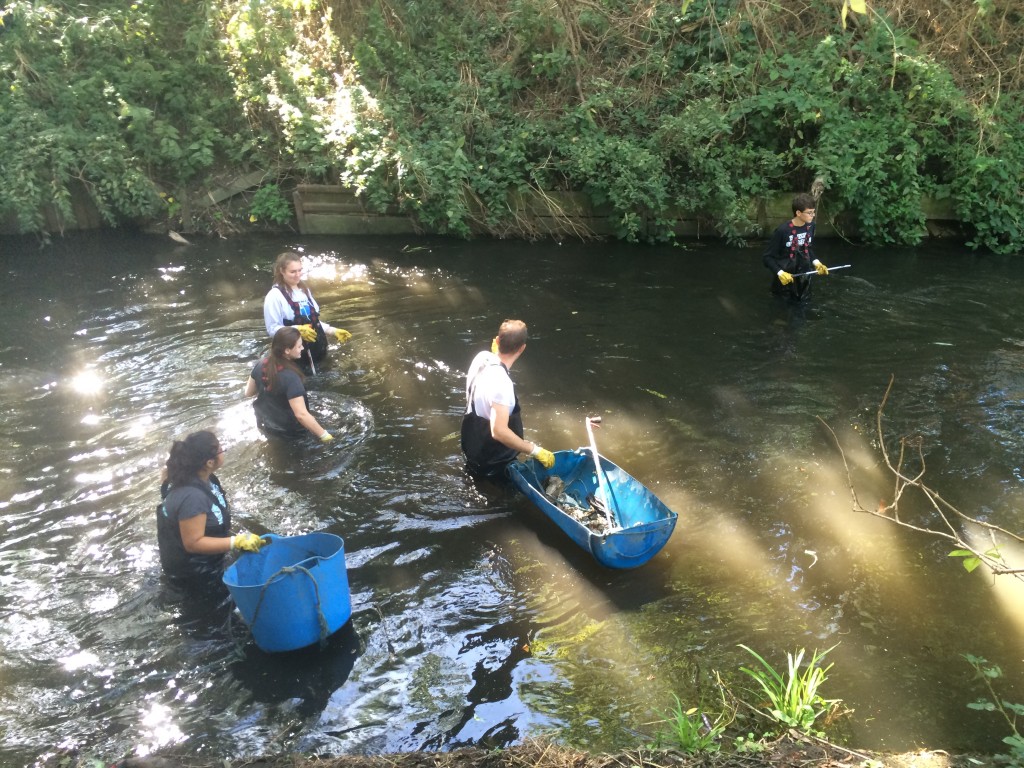 Once again, large amounts of rubbish started coming out but with plenty of hands on the bank we made light work of it. 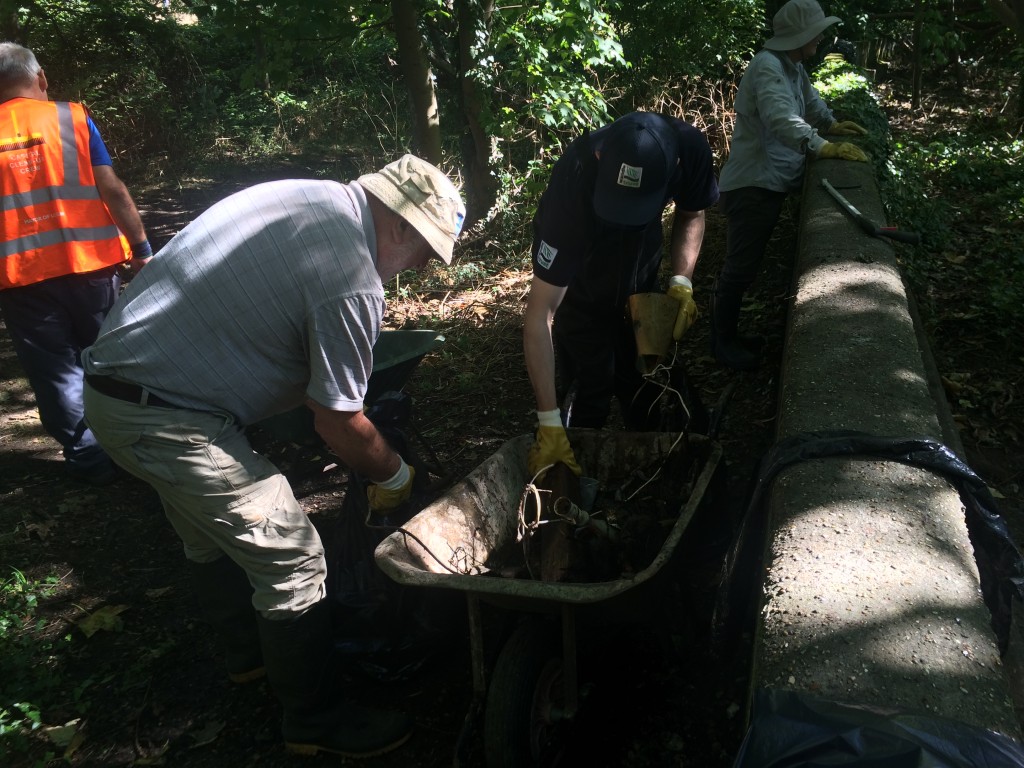 One logistical challenge was a large piece of metal which would not fit in a wheelbarrow. So a chain of 8 people took turns carrying it over the bridge to the rubbish pile, with all the other wheelbarrows of junk too. 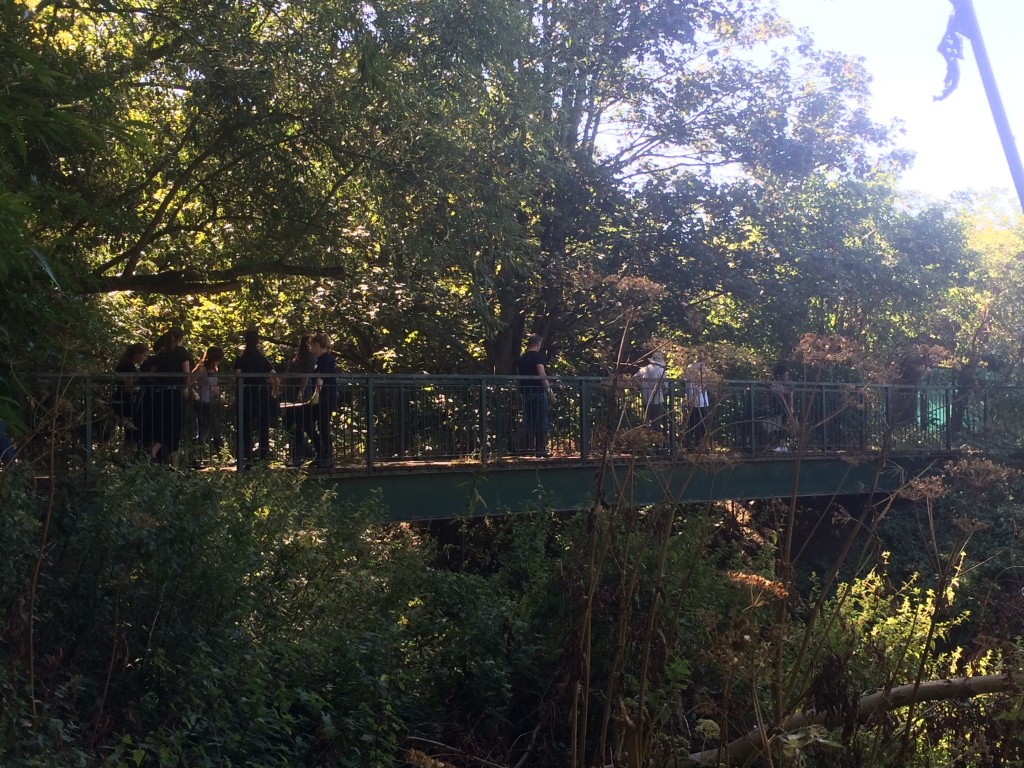 As we worked up the river, there was no shortage of rubbish. We found Iggle Piggle, lawnmowers, coffee tables and tyres. 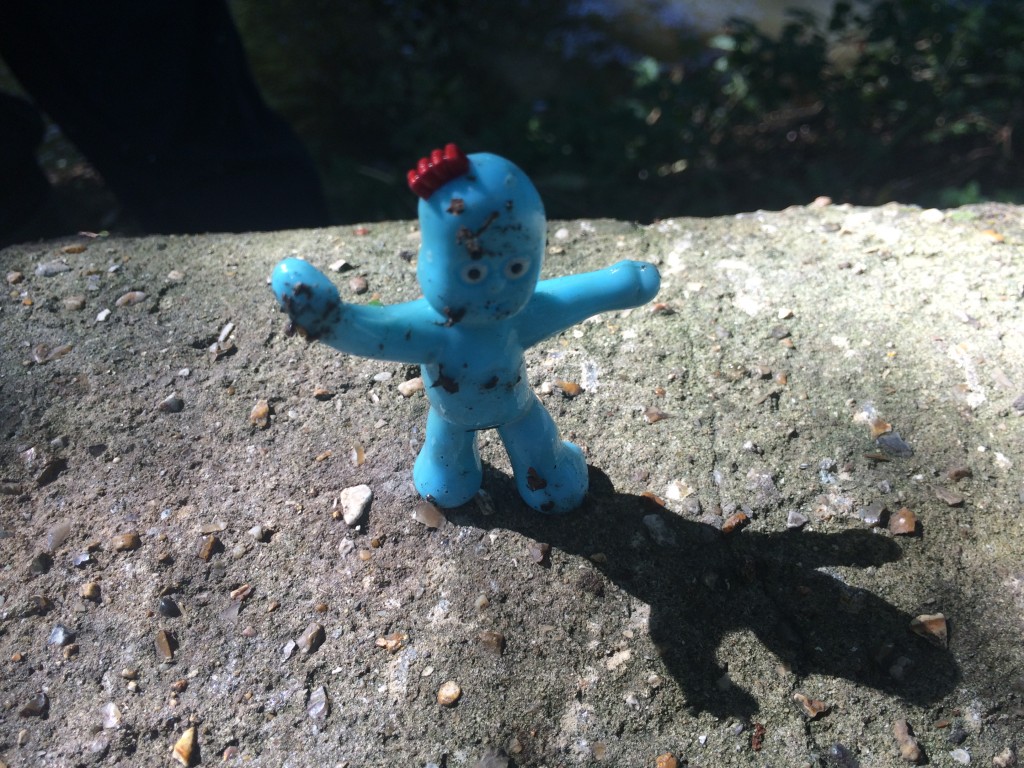 Given we had only been at the site in March, there was a lot of rubbish to find! By lunch time we were exhausted so it was time to stop for cake and tea. A big thank you to Rebecca Watts (Programme Manager for the Living Wandle Landscape Partnership) for nipping to buy emergency cake rations – I had not catered for the feeding of the 5000…

After lunch, we had to change our plan of heading further upstream due to the discovery of an aggressive wasp nest. So instead we headed back and gave the river a second sweep to double check we got everything. Which being the Wandle, of course we hadn’t! 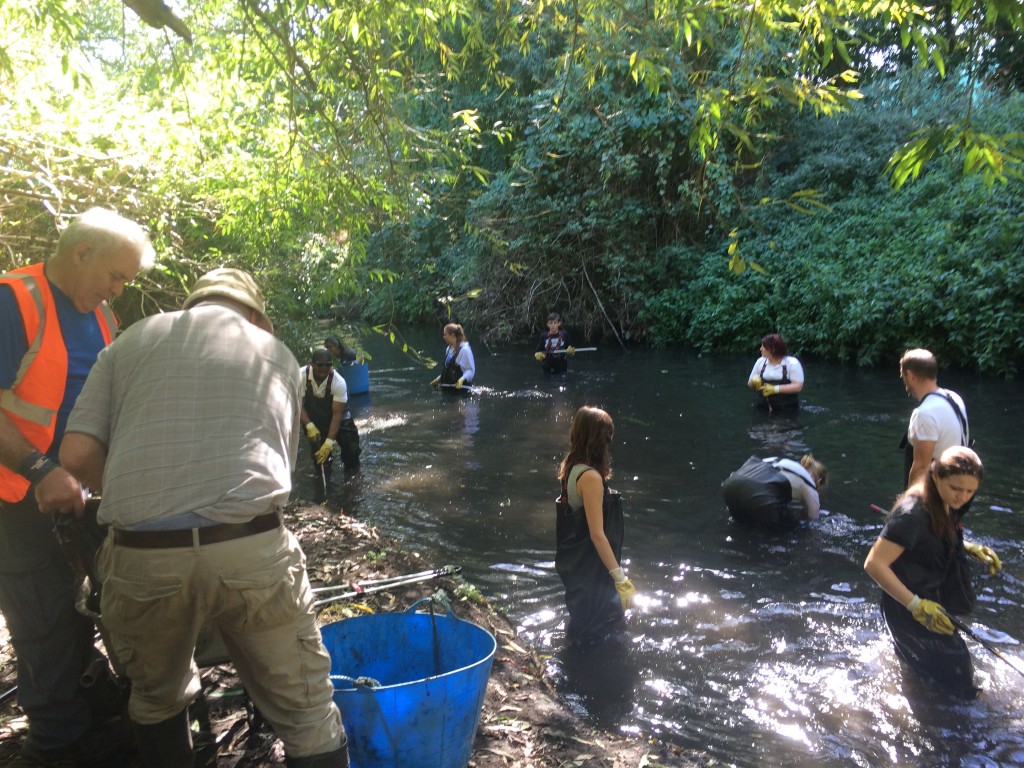 And sure enough, there was more to find. After covering the stretch twice we called it a day and started to pack up the van. 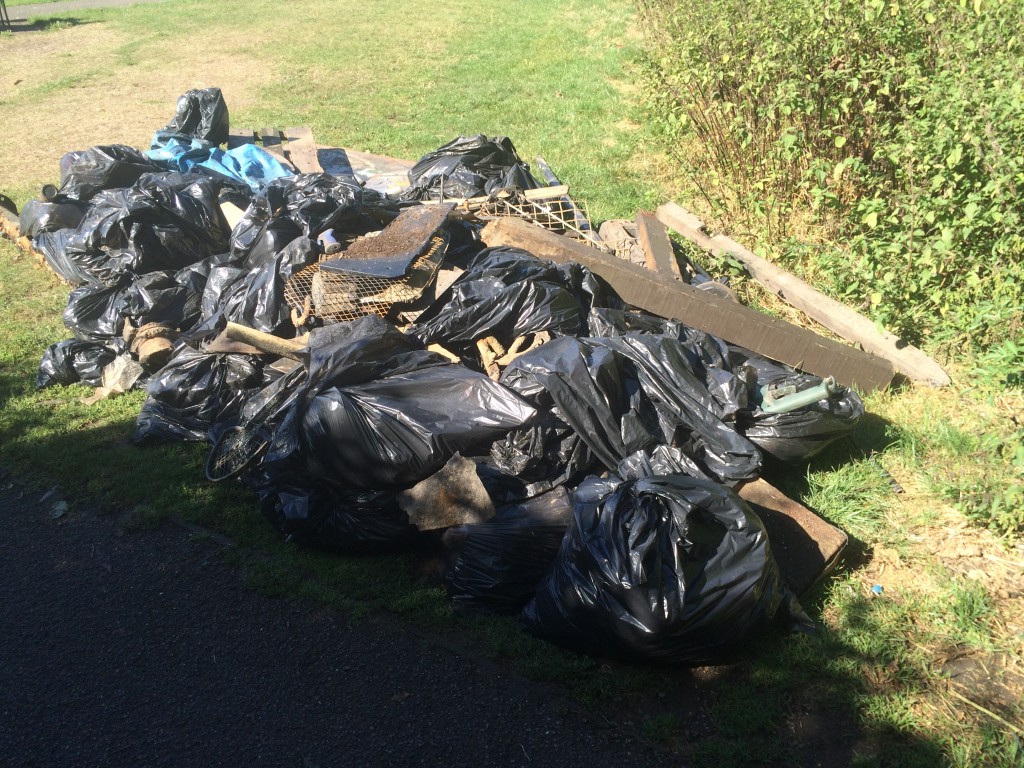 So what did I learn from this month’s cleanup?  That you never know how many people will fancy joining a Wandle cleanup on the day. So prepare for 80…. 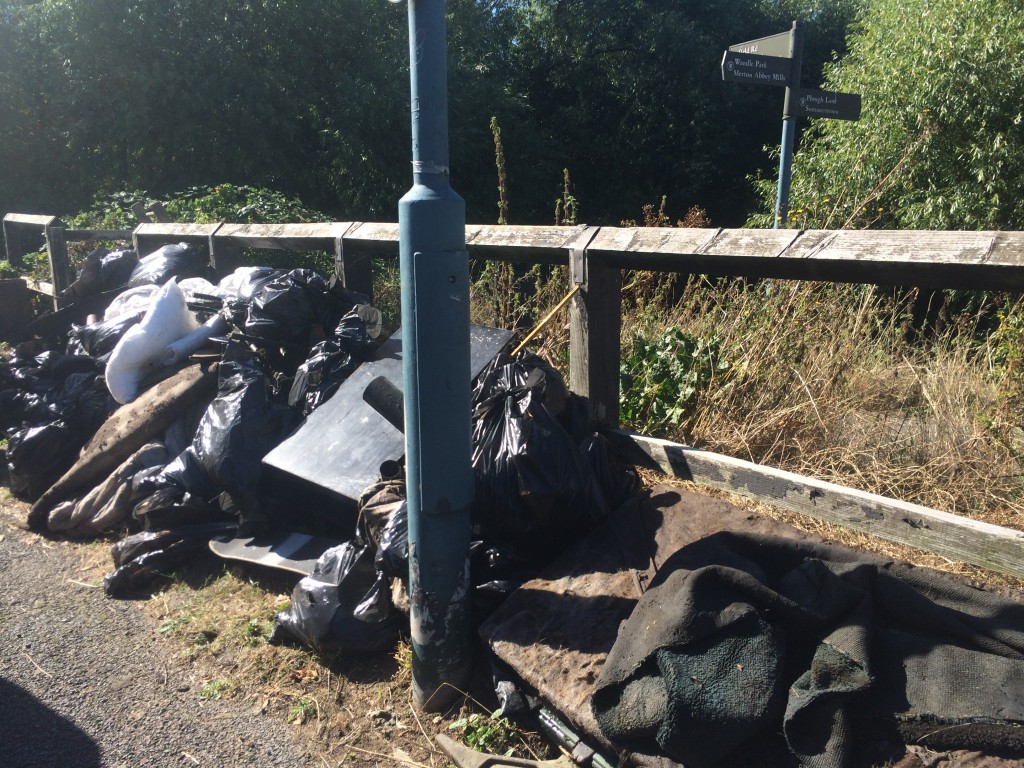