Having joined our volunteers at our community river cleanups in March and April, Eleanor and Rosie of The Brick Box company took all the Wandle rubbish they’d removed and turned it into art! 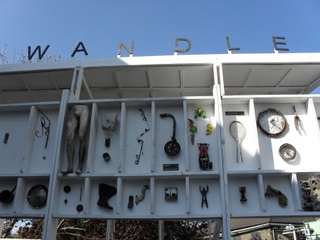 Displaying it in a giant ‘Cabinet of Curiosities’ – built by James from Assemble – it was the centrepiece of the Wandsworth Arts Festival and Fringe which launched on Friday 3 May on a disused triangle of land on Wandsworth High Street, opposite the Ram Brewery site.

Following an amusing speech by Councillor Jonathan Cook, guests enjoyed live music and pink champagne alongside the opportunity to try their hand at screen printing cloth tote bags.  Amongst the designs were a shopping trolley and a list of rubbish, all designed by Gillian from Crafty Pint. 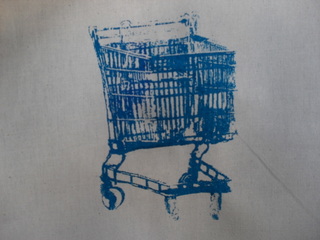 Once printed, they were hung up to dry in some overhanging ivy.  Other bits of rubbish adorned the bar, and a child’s bicycle hung upside down from a metal bracket.

Also on display at the Hub was a copy of the Wandle Alphabet – each letter made out of rubbish pulled from the Wandle by volunteers – compiled by our very own dedicated volunteer and local illustrator Jane Porter. 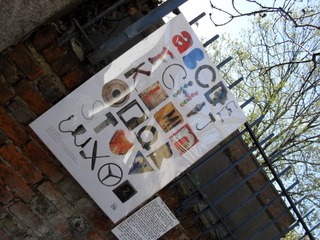 The display runs until 18 May.