Volunteers from the Wandle Trust recently hosted a ‘service day’ for a group of parents, children and young people from the American School in London (ASL).

Assembling at Trewint Street in the sunshine at the end of April, 23 novice but hugely enthusiastic cleaner uppers got stuck in with great gusto.  Everyone worked together as a team, removing fly tipped rubbish from the water and from the Wandle Trail. As we progressed upstream, we found the first of four submerged motorbikes. 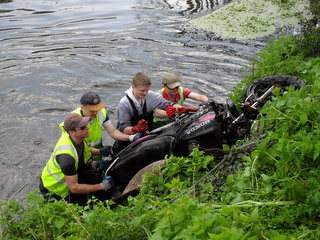 We managed to get one of them out the river and wheelbarrowed over the bridge to where the cage lorry was parked.

Kevan, husband of Kyra who organised the day, and whose size 15 feet were too big for our size 12 waders – he has since bought his own pair! – was in charge of loading up the lorry. 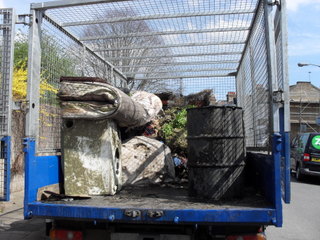 Then it was lunchtime, and as we sat and munched our picnics, one of the students, Jonathan, gave the assembled crowd a talk on the impact of rubbish in rivers generally, and why they were giving their time to the Wandle in particular. 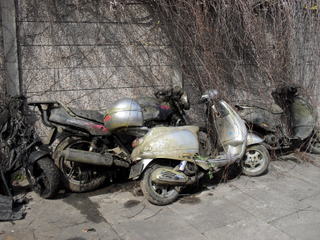 By the time all the cheese scones, fruit sponge and cupcakes had been polished off, we felt suitably energised to get the three remaining motorbikes out of the water.

Rory and Andy tied three grapples/ropes on to each one, and the rest of us hauled them all up the steep bank and carted them off to the dump site.  One, a Honda 1000cc, was particularly heavy, but the wheels still turned making it easier to manoeuvre along the Trail: still, it took 5 burly chaps to do so! 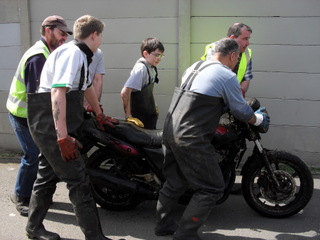 With a final vote of thanks to everyone who attended the cleanup by student Will, we packed up the van and headed off.

Thanks to our volunteers from the Wandle Trust:  Andy, Chris, Michael, Mike, Per, Roger and Rory

And thanks to Terry from Wandsworth Council who turned up with the truck, as well as Joanna and Michael for organising the collection of the rubbish!

We removed amongst other things:  1 tumble drier, 1 chess pawn, 1 shoe, 1 mattress, 1 oil drum, 4 motorbikes/mopeds and hundreds of drinks cans (especially Guinness) – all in all about 2 tonnes or so of wet and filthy rubbish.