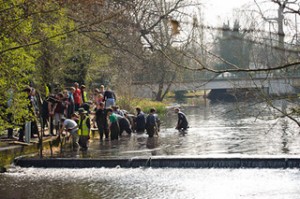 We’re delighted to report that the Environment Agency has named the Wandle as one of the UK’s rivers which has shrugged off its industrial past and improved the most in the last twenty years.

From the EA’s press release:

Historically the river has suffered extreme pollution and was officially declared a sewer in the 1960s. But over the last 20 years it has become a vibrant rich habitat due to better environmental regulation, a fish stocking programme and huge local enthusiasm for the river which has resulted in a vast improvement of water quality.

The Wandle is now well known as one of the best urban coarse fisheries in the country and supports a huge variety of wildlife supporting a wide variety of species including chub, barbel and eel. It has also become a very popular location for walkers.

On a slow news Tuesday after the August Bank Holiday weekend, BBC and ITV film crews descended on the Wandle… and camped at Morden Hall Park for a full twelve hours of rolling coverage, interviewing the National Trust’s Simon Cranmer and Chris Heels, the EA’s Tom Cousins, and our own Director Bella Davies and Trustee Jane Porter.

Print and digital media picked up the story too, and you can read some of those stories and commentaries here:

Many thanks to all our project partners and amazing volunteers who have done so much to help the Wandle recover its health – and here’s to many more improvements in the months and years to come!