Here on the Wandle, amidst the daily muck and bullets of urban river restoration, it’s safe to say that the glamour moments don’t happen often.

So when the years you’ve been putting into this poor little river are suddenly up there in the global limelight with the work of organisations like Orri Vigfusson’s North Atlantic Salmon Fund… that’s a cause for celebration! 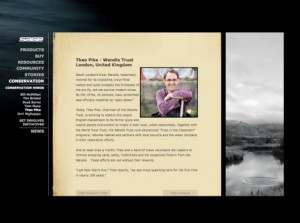 Sage is one of the most conservation-minded fishing tackle manufacturers in the world, sponsoring many heavy-hitting river restoration efforts including the Wild Trout Trust. (And so every tackle-maker should be, because when all the habitats have been permanently trashed, and the fish are gone, even the world’s most beautiful fishing rods and reels suddenly won’t seem so useful or desirable any more!)

In this sort of context, it’s an amazing honour for me to add to last year’s Bernard Venables Award from the Wild Trout Trust, and join fellow Trustees Gideon with his Wandsworth Green Guardian Award, and Gill with her Change the World Award…

… by being hailed by Sage as one of their 6 worldwide Conservation Heroes for 2009.

Here’s what Sage say about our favourite river and its ongoing recovery in their website and catalogue, written in time for last autumn’s trade shows:

South London’s River Wandle, historically revered for its crystalline, trout-filled waters and quite probably the birthplace of the dry fly, did not survive modern times.  By the 1970s, its polluted, toxic streambed was officially classified as “open sewer.”

Today, Theo Pike, Chairman of the Wandle Trust, is working to restore this classic English chalkstream to its former glory and inspire people everywhere to invest in their local, urban watersheds. Together with the Wild Trout Trust, the Wandle Trust runs educational “Trout in the Classroom” programs, rebuilds habitat and partners with local councils and the water company in their restoration efforts.

And at least once a month, Theo and a band of brave volunteers don waders to remove shopping carts, sofas, motorbikes and the occasional firearm from the Wandle.   These efforts are not without their rewards.

With my deepest thanks to Sage, what else can I say but this: it’s an honour just to be seen in such committed company.

And it’s a downright source of pride to be working with everyone here on the Wandle.

Now, when’s our next cleanup?