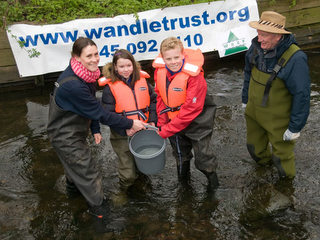 Phew! The first of our two scheduled Trout in the Classroom release days has come and gone successfully, and around 300 young brown trout have been set free into the waters of the Wandle.

On Thursday 28 March, students and staff from 5 schools in the Wandsworth area brought their very lovingly nurtured brown trout in buckets from their schools to the banks of the Wandle on Garratt Lane and cheered them on as they were released into their new home. The buzz began as around 70 students, staff and volunteers arrived early, and waited in suspense for the Mayor of Wandsworth, Cllr Adrian Knowles. Thankfully, he did arrive – and delivered a thoughtful speech about the significance of the event, putting into perspective the journey the river has made in the past 50 years.

I have to admit that at times it has been a rocky road to get the fish to this point. The schools had to contend with fungus infecting the initial batch of eggs, killing many of them before they hatched. Of the new recruits, added to the tanks as alevin, there have been fish kills from high levels of nitrite and occasional equipment malfunction. Therefore, it was with a certain degree of pride that, collectively, we had these 300 or so fish that had overcome these barriers to make it to the river!

It was very gratifying to see the number of volunteers turn up for the event. The volunteers have made the project possible, by providing countless hours of free assistance to set up the equipment and troubleshoot to keep the tanks going. I would like to thank them very sincerely for their effort – it was a real pleasure to have them on board. 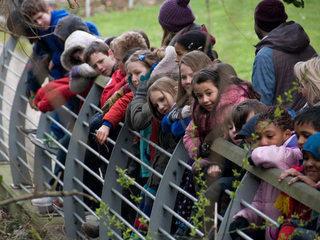 The most gratifying part, however, was the sheer excitement and pride shown by the young people. The value of the project became apparent as we helped a group of them get into waders and assisted them into the river, for many of them for the first time. It felt like – and I’m convinced it was – an important event for these young people, bringing them closer than ever to their local natural environment. Which, of course, is what it is all about!

Later this month we will be writing about the support from local businesses that made this project possible, but we would like to single out the Western Riverside Environmental Fund – a partnership between the Western Riverside Waste Authority based at the mouth of the Wandle and Groundwork UK – who have majority funded the scheme for 10 schools in the Wandsworth area over the past 2 years. We are very grateful for this support and would like to thank them once again.

Update 1: The story of our release day was picked up by the local media: click here to watch a video on the Wandsworth Guardian’s website.

Update 2 : Environmental writer George Monbiot attended our second trout fry release, in Morden Hall Park, on Thursday 18 April, and has now reported it here in his blog on the Guardian website.