Once again, 2007 – 08 has been a record year for the Wandle Trust’s Trout in the Classroom programme.

We set up our first prototype hatchery in 2001 with Thames 21, on the corner of Alistair Maltby’s and Mark Lloyd’s desks – and this year, no less than 20 schools took part!

This year, we’d like to thank Thames Water for their generous sponsorship, as well as the Sofronie Foundation who have supported us for the first time.

Teachers agree that elements of TITCR link seamlessly into almost all areas of the National Curriculum. This year a great deal of brilliant art work was produced, poetry written and Linden Lodge’s special subject of the year “Dead or Alive” was certainly very apt!

The citizenship area of the curriculum is well covered with this project as the kids learn valuable skills when they have to clean the water in the tank, make sure it stays at a constant temperature, take out and dispose of any dead specimens, and draw up rotas for feeding the little fry.

The students are always very proud to attend their fry release days on the River Wandle. This year, our release days were each remarkable for different reasons:

On Wednesday 19 March at Morden Hall Park, we were delighted to welcome TV presenter and ecologist Charles Rangeley-Wilson as guest of honour.   Upon hearing in the presentation speech that “we are honoured to have a very famous person here today”, Bobby from Linden Lodge shouted out hopefully “It’s not Ainslie Harriot, is it?” 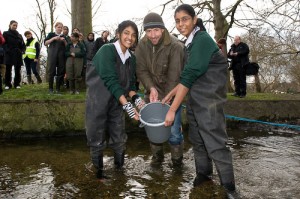 On Thursday 27 March at Richmond Green in Sutton, the Environment Agency gave us permission to release fry in this location for the very first time, an indication of the improving fortunes of the Wandle.  The mayor of Croydon, Councillor Derek Millard, came to give a speech and pose for photographs: as a result we were almost swamped by press photographers! 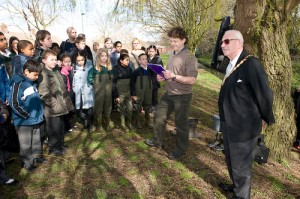 Finally, on Thursday 3 April in Wandsworth, the crew from BBC TV childrens’ programme, Newsround, went into Honeywell School to film the pupils netting out their trout fry. They then followed them down to the river for the release.  The item was screened the following day on the main and digital channels.

Once again, Trout in the Classroom has proved a profound learning experience for everyone who took part in it this year.  All the evidence shows that our participants learn about the importance of looking after their local river, riverine wildlife and environment. They are also introduced to the wider issues concerning the natural world.

Here’s what one of our teachers, John O’Shea, Year 4 class teacher at Allfarthing School, told us:

“Many of the children don’t have pets so it’s nice for them to have a chance to look after a living creature and learn about the life cycle. They are all keen to help with feeding and cleaning – and it is also a useful learning experience if any of the fish die.

“We have used the trout in various different parts of the curriculum – for example, for literacy the children have had to write an explanatory text about how to look after the fish.”