At 10.30am on Wednesday 30 March, pupils from six of our participating Trout in the Classroom schools gathered at Hackbridge to release their carefully and diligently nurtured trout fry into the River Wandle.

All those present were also there to celebrate the tenth anniversary of the inception of this project in 2001 – a decade of learning about the importance of a healthy river and the life-cycle of the wild brown trout: 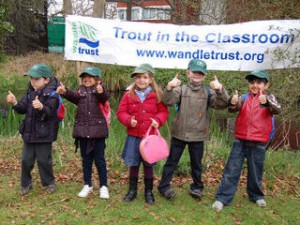 At the beginning of the morning the children gathered on the green and peered into each others’ buckets to compare their baby trout and swap fish rearing tips: 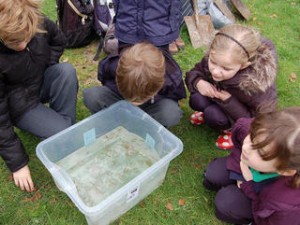 In fact this has turned out to be the best year ever for survival rates with all the schools having over fifty fish fry at the release stage and some considerably more!  Notwithstanding the usual challenges of equipment malfunctions and blocked filters.

Many local councillors attended the event and the introductory speech was given by our guest of honour Mr Sean Brennan, the Leader of Sutton Council: 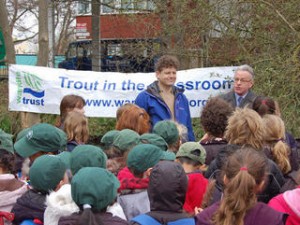 Sutton Council have big plans for the regeneration of the whole of the Hackbridge area as part of the Hackbridge Masterplan, and the Wandle Trust has been working closely with Peter O’Connell and other Council officers to make sure river restoration is also part of this project. 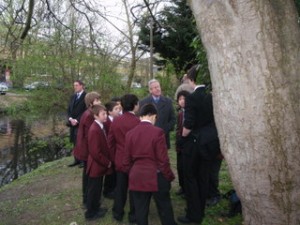 After the speeches it was time for each school to release their trout. The students donned their waders and life jackets and were helped into the water by Wandle Trust volunteers: 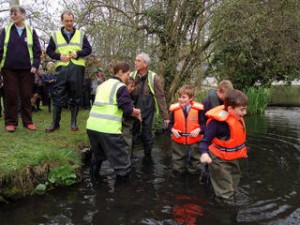 The whole crowd counted down and then cheered as the pupils tilted their buckets and the young fish finally swam free: 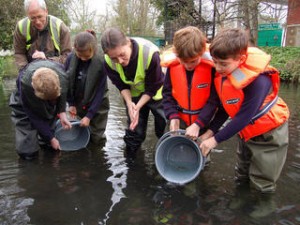 I was particularly aware of how excitedly the children spoke about how it felt to wade in the water.  For most of them it was the first time they had ever done experienced anything like this. Like my own memories of a school trip to a waterway I’m sure many of them will remember this for a lifetime! 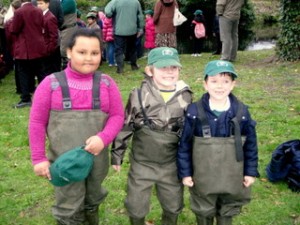 In a rather untimely manner OFSTED chose to visit Benedict School on this very morning which meant the school couldn’t take part in the first release event. Benedict were very happy though to have their own tailor made release, including a nature walk along the Wandle, the following week on Thursday 7 April.

Articles about our Trout in the Classroom trout releases appeared in several local papers. Please click here to read one of these.

This year the volunteers who helped were: Andrew, Jez, Jim, John, Peter, Sally, Sally-Anne, Susan and Theo. I would also like to extend my thanks to all the volunteers who have supported our schools over the last ten years. Without them this project wouldn’t be possible. 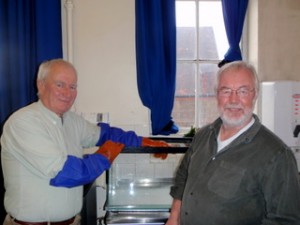 2 thoughts on “Trout in the Classroom: Ten years old and still going strong!”