The one with the safe, the Tardis… and 2 extra wheelbarrows!

When we unloaded the van at Culvers Avenue on an extraordinarily warm spring day, we had ambitious plans to clean up round the island and keep going all the way up to Restmor Way, and because 66 volunteers turned up to help, we managed to do it.

After our usual Health and Safety briefing, we divided our volunteers into 2 groups and tackled both arms of the river around Culvers Island.   All sorts of litter came out of the river at this stage including tyres, bicycles – and Rob’s favourite find of the day, a toy Tardis! 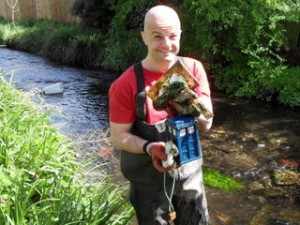 We took a break at about 1 o‘clock for tea, coffee, and delicious cheese scones, hot cross buns, cake and home-made biscuits produced by Sally and Jo.

Suitably refreshed, we worked our way up towards Corbet Close past the coir rolls we’d installed in March 2009: 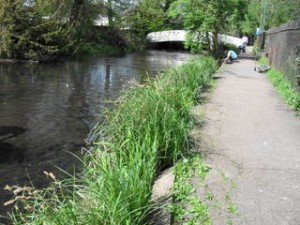 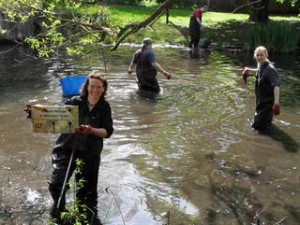 We were just about to call it a day when the guys found a safe in the water just below Shepley Mill.  They managed to get it to the bank, where the first attempt to remove it with ropes attached to the towing hook of the scrappies’ truck had to be abandoned because the ropes snapped.  Sheer muscle power brought the safe up the bank… 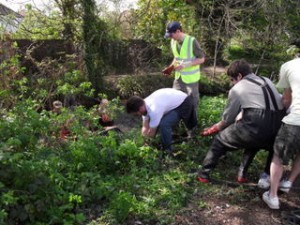 … before manhandling it up a couple of planks into the back of the truck: 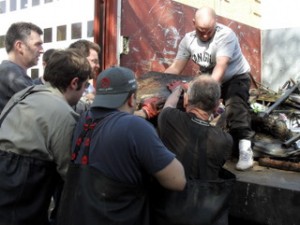 Owing to the distance covered by our volunteers in this single session there were 3 rubbish dump sites, which, thanks to the support of Sandra and the Sutton Council waste management team, made rubbish disposal much easier: 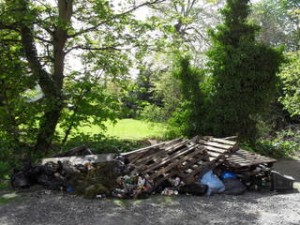 Finally, Abi and Jo gave the trugs a much needed wash before we loaded up the van with all the kit: 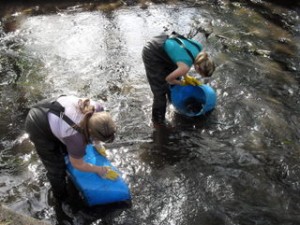 Curiously, when we got back to the garage to unload all the equipment, we had 2 more wheelbarrows than we had when we loaded up that morning!