Undeterred by the prospect of April showers, 49 volunteers assembled on the Wandle Trail to tackle a stretch of the river we hadn’t visited for at least 5 years. Water levels are generally much lower now than they were then, so it seemed a perfect time to return and see what we could dredge up from the depths.

Very early on, in the shadow of Wandsworth Council’s refuse lorry park, some of the guys found what they originally thought was a pipe, but soon discovered to be a full-sized lamp post!

As you’ll see, this would amuse and frustrate them in equal measure for the duration of the cleanup, so determined were they to remove it… 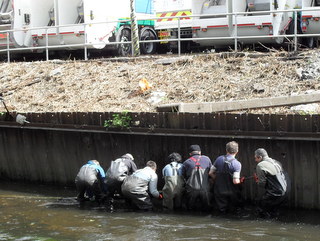 Elsewhere, the predictable pieces of chipboard, carpets, mattresses and piping began to emerge from the water, and were passed to bank-based volunteers through a convenient hole in the corrugated steel pilings: 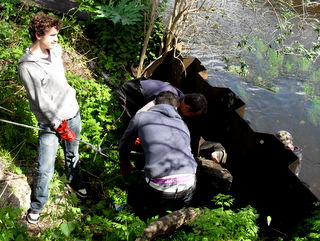 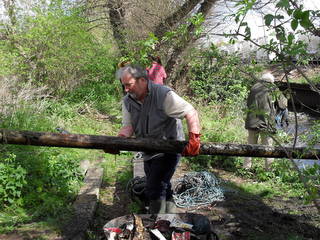 Meanwhile, back at the lamp post, the guys are excavating one end which is obstinately stuck in the river bed … 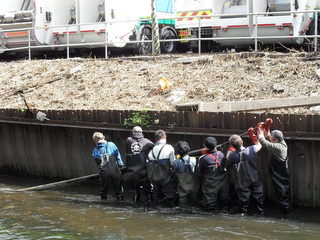 Further along the Trail, some of our volunteers got on with the task of dragging a large piece of carpet out of the river… 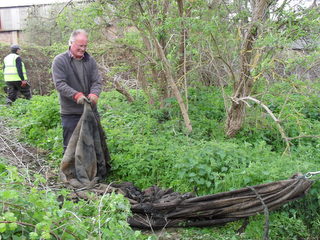 … whilst others did some very valuable litter picking.  And what a sterling job they did!  Not only did they barrow back load after load of rubbish,  they removed a small fly tipped pile of junk from the bushes, which included at least a dozen tyres: 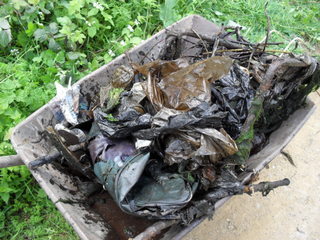 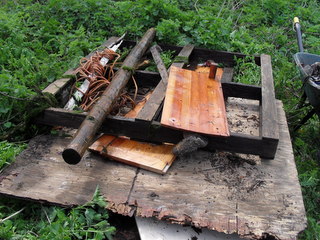 Meanwhile, back at the lamp post, the guys have rotated it through 90 degrees, lifting the free end up and out of the water and tying it to – guess what? – whilst they figure out what to do next! 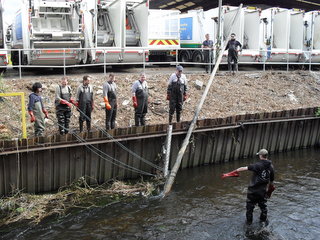 This seemed an appropriate time to stop and recharge our batteries with tea, coffee and delicious rhubarb yoghurt and lemon coconut cakes prepared by Sally and Jo. With our gazebo pitched at the side of the Trail you could be forgiven for thinking that we were miles away from the urban sprawl of South West London! 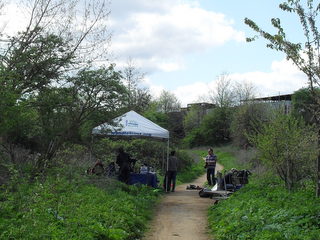 Meanwhile, back at the lamp post, energised by cake, the guys have rotated the lamp post through a full 180 degrees, so dislodging the end which was stuck fast in the riverbed… 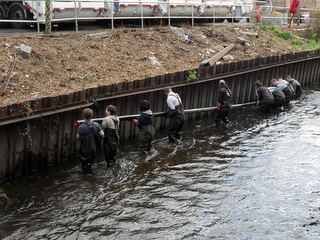 The rest of our volunteers continued to pile the rubbish up outside the now-closed waste and recycling centre on Weir Road, where the irony of the signs saying ‘No Flytipping’ weren’t lost on any of us! 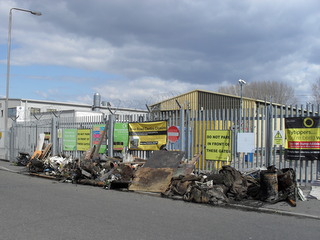 Meanwhile, back at the lamp post, with all the muscle power they can muster, the guys have dead-lifted it out of the river and laid it carefully on the bank where it evidently once stood… 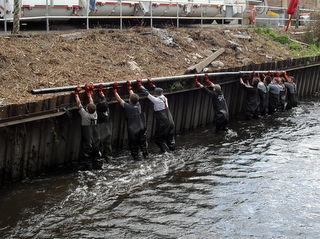 During all this Herculean activity, our regular lorry driver, Stan, turned up to remove the rubbish and, again, there was so much of it, he said he would have to return with a colleague for another load later. And as ever, we’re also very grateful to Tony of Merton Council’s Waste Management Team, who arranged collection of the rubbish pile on the day.

Finally, our thanks go to Ned and Kirstie from Zipvan who not only got stuck in with the rest of our volunteers but also confirmed that Sunday’s van hire was ‘on the house’. As they both had to rush off after the cleanup, they didn’t see what gets loaded into the back of one of their vans… but they’ll find out now! 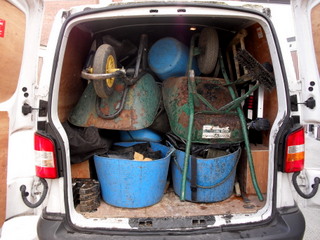