This month saw us in the same location as August last year – Poulter Park in Sutton – but unlike last year’s cleanup we were able to get into the river.  Some of the group started work just downstream from Watermead Lane clearing the rubbish which had gathered on the inside bend of fast flowing water.  As can be seen below a sizeable amount of rubbish was quickly pulled out and then had to be wheelbarrowed a substantial distance to the dumping site. 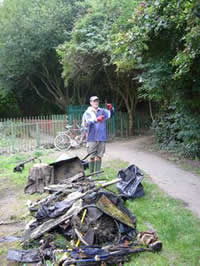 The main part of the cleanup was further downstream towards Bennett’s Hole and it wasn’t long before large amounts of rubbish were pulled from there too. 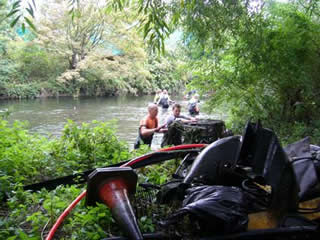 Of course a shopping trolley was found and Freya found it to be quite comfortable. 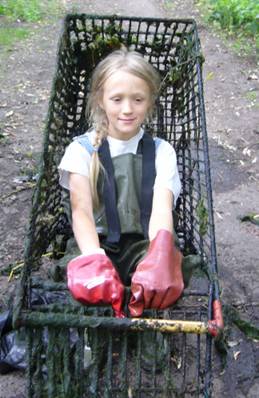 At the end of the day our efforts were rewarded with a large pile of rubbish, despite managing to clear less than 100 metres of river!

We then adjourned to the Queen’s Head on Mill Green for a couple of reviving drinks.  Sally was selling pots of her Wandle blackberry jam – if you fancy a pot visit us at the Carshalton Environmental Fair on Bank Holiday Monday.