The one with the battle against alien invaders

Having learned that the Royal Marines have been helping to remove Himlayan balsam from the River Otter, here in the rather cloudy but relatively warm Wandle Valley, we had no problem assembling a platoon of 36 volunteers to bash balsam in the vicinity of Beddington Park.  Just like the Royal Marines our volunteers are amphibious, so having donned the requisite uniform of chest waders and gloves, and having received their marching orders via a comprehensive health and safety briefing, our troops were armed and ready to engage the enemy!

Having sent an advanced party ahead on reconnaissance, we divided ourselves into three crack urban commando units: one to march to the top of the river and check whether any HB stands had appeared since last month, one deployed to the terracotta bridge to start pulling stands from there back to Gazebo HQ, and one despatched to just below the road bridge on London Road to work downstream removing balsam stands at the bottom of residents’ gardens on the way to Wilderness Island. 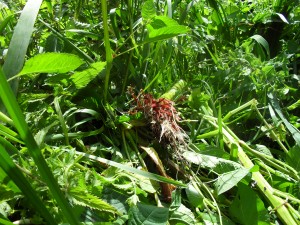 Unit 1, which went back to the top of the river at Richmond Green, were delighted to find only 4 stands of balsam, but did, however, discover a builders’ bag full of gloss paint.  This was loaded into the back of the van, and then driven to the meadow in Beddington Park, via Guy Road, to meet Unit 2.   Meanwhile, Unit 3 was carrying out excellent work downstream of the London Road bridge under the watchful eyes of Jo H and John L.  They wheeled barrow after barrow of the stems back to the car park where it was heaped up ready for collection. 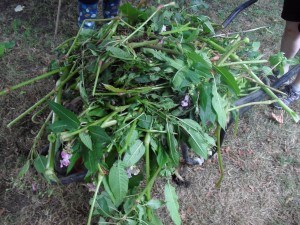 Unfortunately, whilst in Beddington Park, Per got stung below the eyebrow by a wasp.  He was immediately ‘casevaced’ by van back to Gazebo HQ where he was treated with antihistamine cream.  Following a call to the new NHS line ‘111’ and having been checked out over the phone, he was advised to attend the Wilson Hospital Walk-In Centre in Mitcham.  Our thanks go to Sue Bailey who kindly drove him there.  He was duly examined, discharged and, and although not technically AWOL, sent a message that he was heading home on the bus!

We all know that an army marches on its stomach and Jo, Sue and Sally provided delicious rations, including a savoury tray bake, a blueberry sponge and raisin flapjacks.  This was washed down with plenty of tea, coffee and squash. 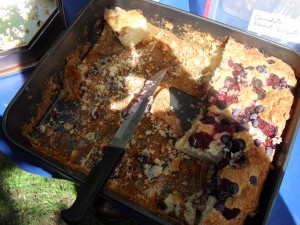 Now fortified, we decided to re-advance to contact with the balsam.  We went back into the park and discovered quite a few stands in a small wetland area which we pulled up.

So thoroughly did our troops hunt down and remove all the balsam, that we were looking for more of it well before the end of the exercise. 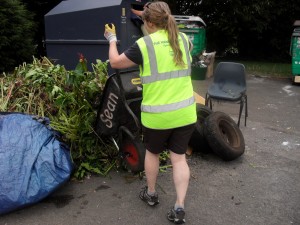 Efficiently and speedily the van was loaded with all the kit, and with a final look at the rubbish removed and the balsam pulled, all personnel were accounted for and stood down for some much needed R & R until next time. 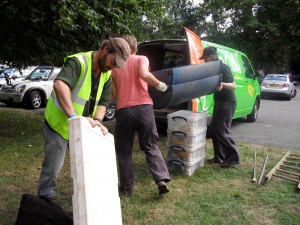 Our thanks to David from Sutton Council‘s Waste Management Team who organised collection of the rubbish and the Himalayan balsam.

Thanks, too, to Michael Kendra who helped load up the van but had other plans so did not join us on the day, and to Charles who helped unload.

Who removed:  1 budgie’s cage, 1 sheet of hardboard, 1 builder’s bag full of paint, 2 plastic chairs, 4 tyres and about a tonne and a half of Himalayan balsam 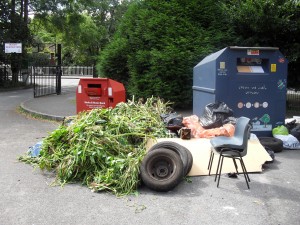