The one with the remnants of Hurricane Bertha

After weeks of beautiful sunshine, we had everything crossed that the torrential rain forecast for the day of our cleanup would somehow miraculously steer clear of Beddington Park.   To begin with it seemed fine… 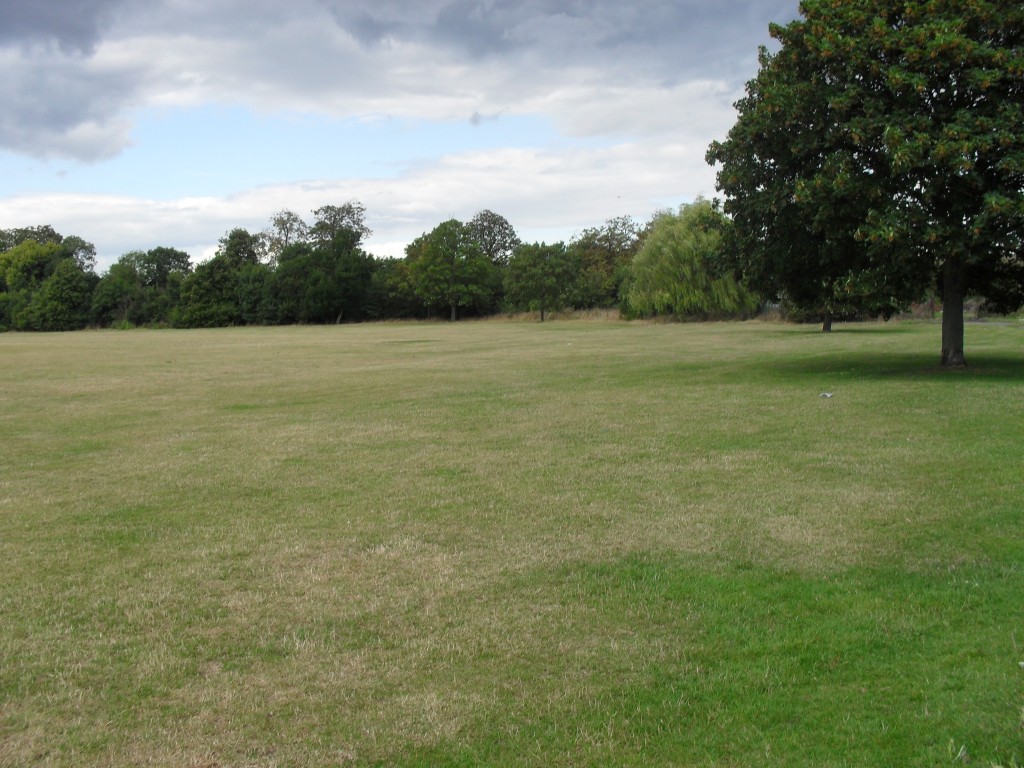 …. and then the heavens opened and it lashed down for 45 minutes.

Waiting to see whether any volunteers would turn up at all, we were astonished, but delighted, to see 10 people appear through the swish of the van’s windscreen wipers.

In addition, Amanda, a presenter/producer from Living Surrey – a television programme, which as its name suggests, features county interviews, news and more – had emailed to say that she would like to come and film us at work on the same day.

During a lull in the downpour, our hardy volunteers all decided that, as they had turned up and were already quite wet, that they would like to do something rather than go home.  Hurray!

So, in a rather pared down version of our usual cleanup, we got kitted up in waders and gloves, took builders bags, bin bags and litter pickers in 3 wheelbarrows, stored all our personal belongings in the van, and trekked off into the soggy parkland to pull up the remaining stands of Himalayan balsam, spotted the Saturday before. 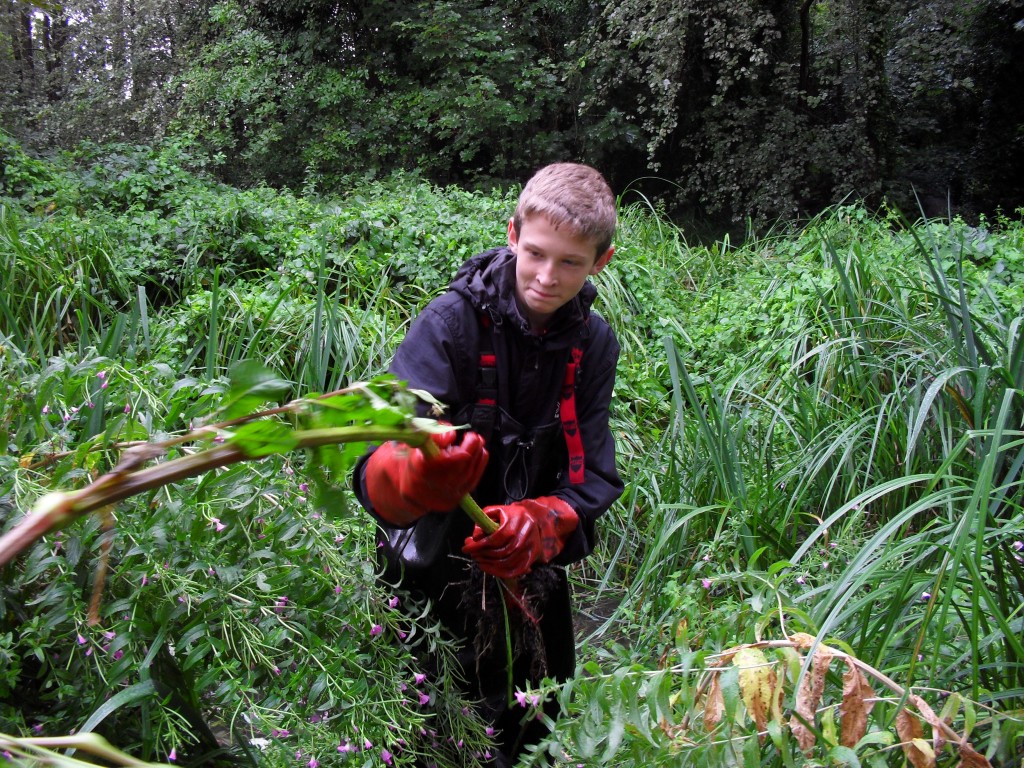 and having wheeled these to the car park just off London Road, where Sutton Council had asked us to put it, we started on the bank just by the stone and flint bridge. 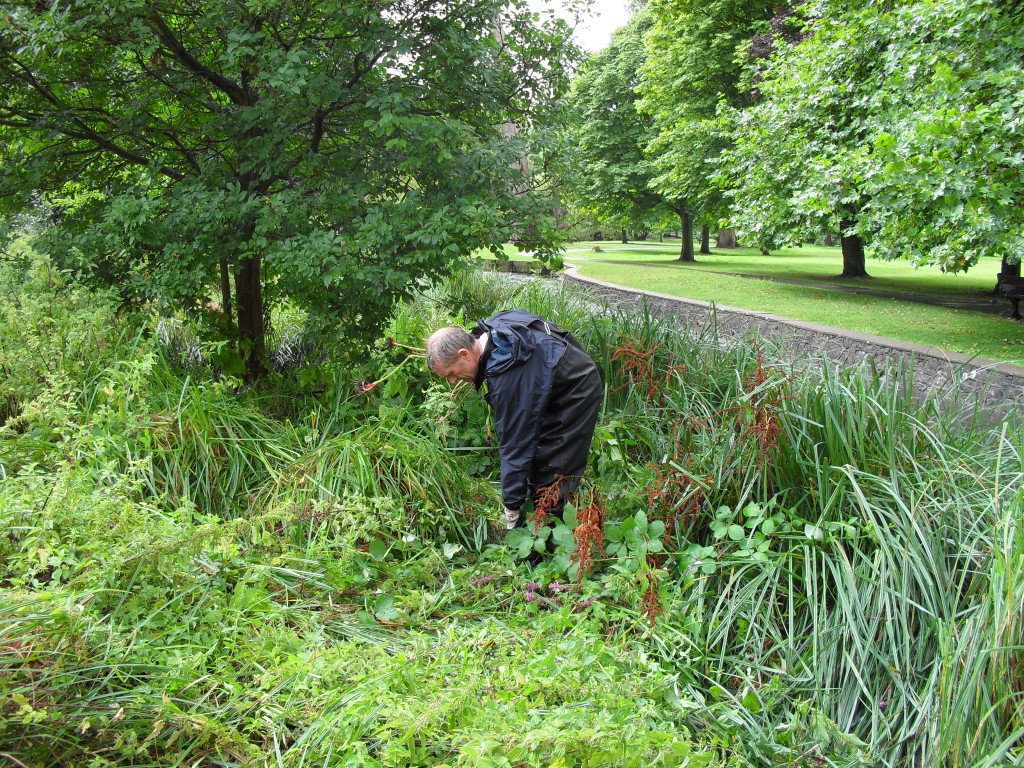 We were making excellent progress when we received a telephone call from Amanda to say she and David, the cameraman, had arrived.

So this seemed a good time to take a break.  Even though we’d brought all the bits and pieces for  refreshments, we decided that it was easier to take our chocolate muffins to the Pavilion cafe and buy all the volunteers teas and coffees instead of firing up the gas boiler. 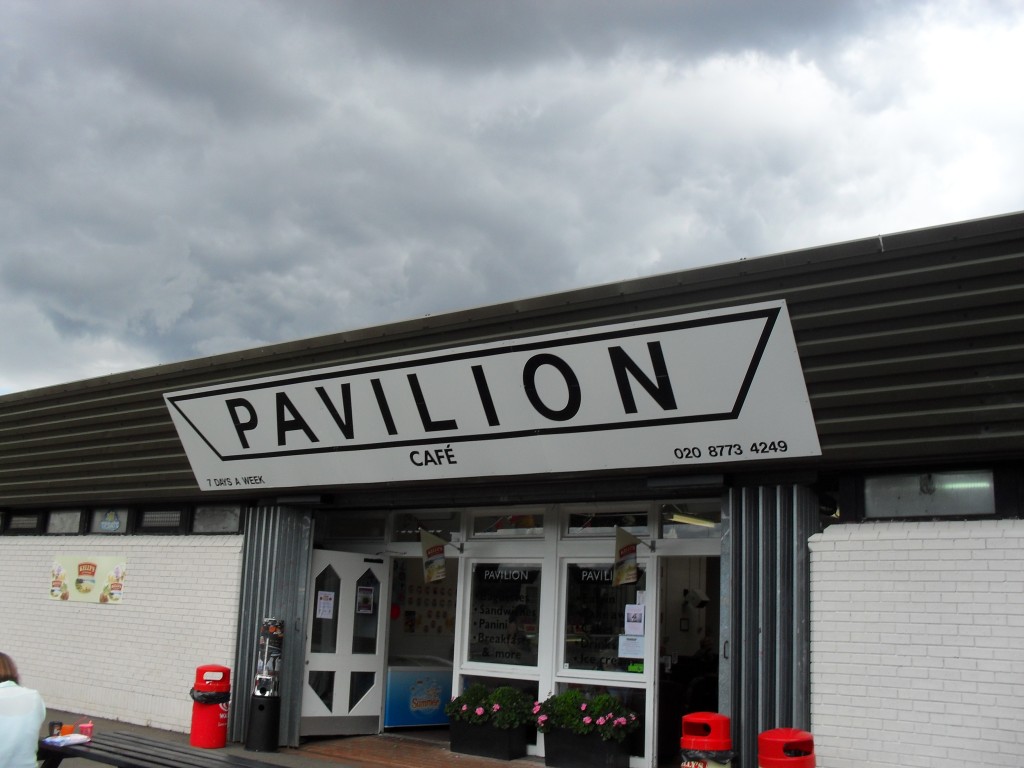 Amanda and David joined us at the picnic benches outside the cafe and began interviewing our volunteers, asking them what it was that motivated them to turn out on such a wet day!  Tune into the programme on Sky 192 from 15th August at 7pm (or go to their website – Episode 6) to find out what they said!

With a camera and sound boom in tow, we went back to our HB bashing and everyone was filmed pulling up the few remaining stands 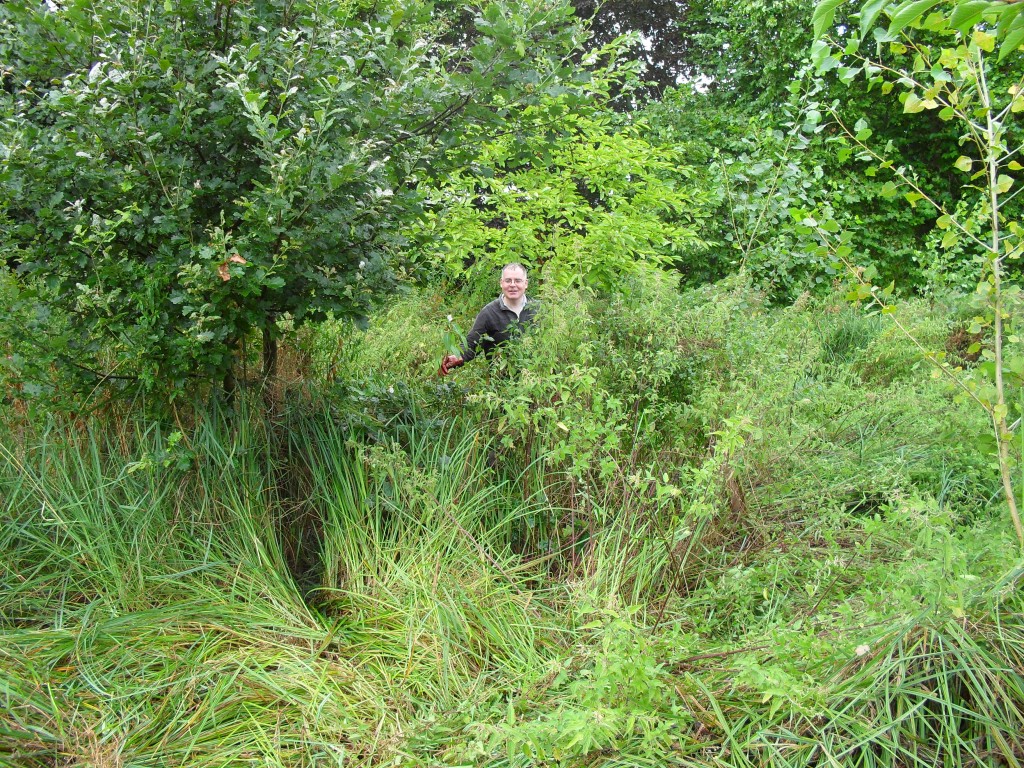 loading them into the builders’ bags or wheeling them all away. 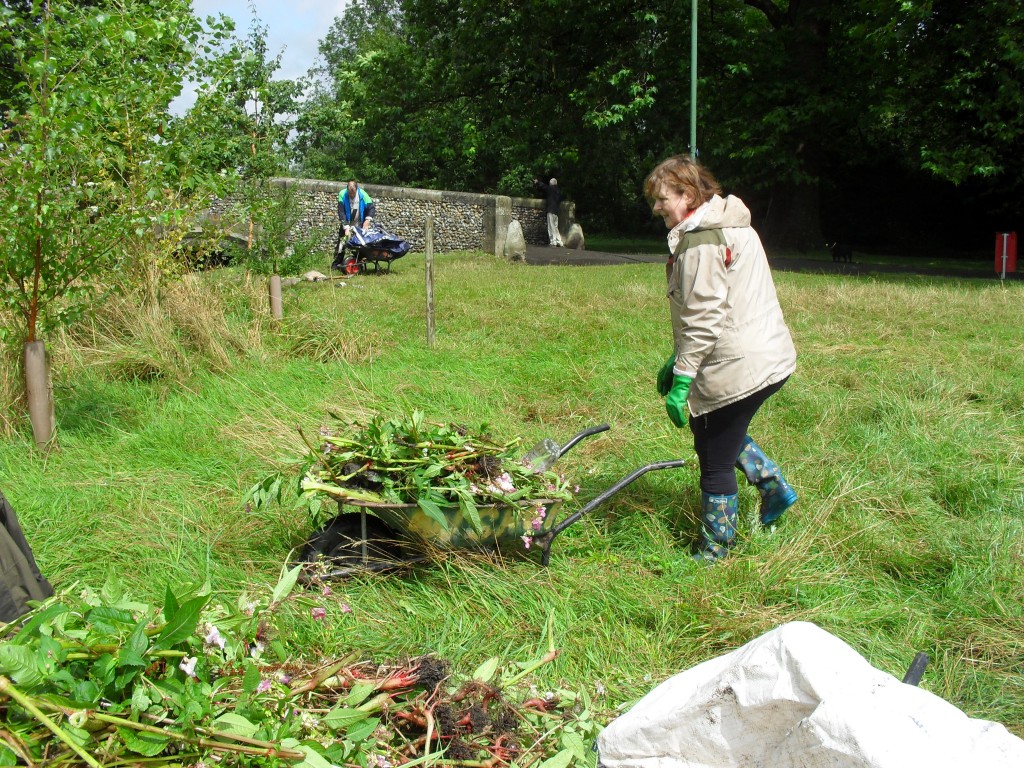 Finally, when we all agreed that it was a ‘wrap’,  we went our separate ways home for hot baths and dry clothes 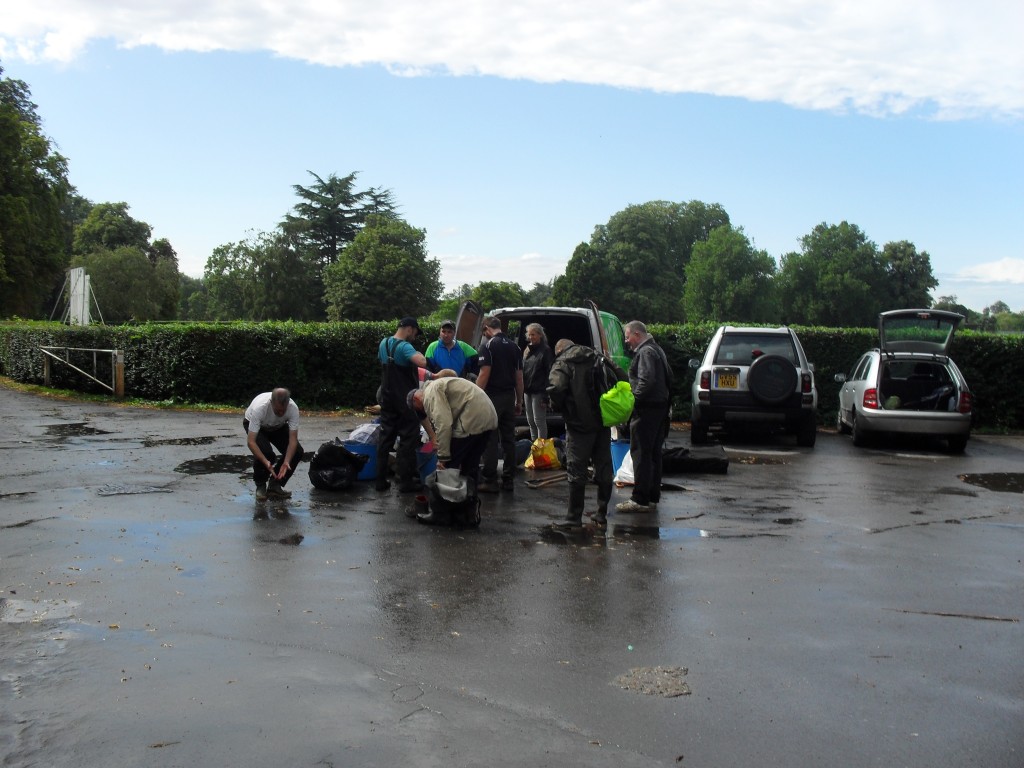 but not before AJ tipped out one last bag of HB on to the pile in the car park before we set off for the garage.

Huge thanks to AJ who helped load up, drive and unload the van, to Bill Wyatt and Ian Hudson who organised the removal of the balsam, and to our small team of valiant if rather sodden volunteers: 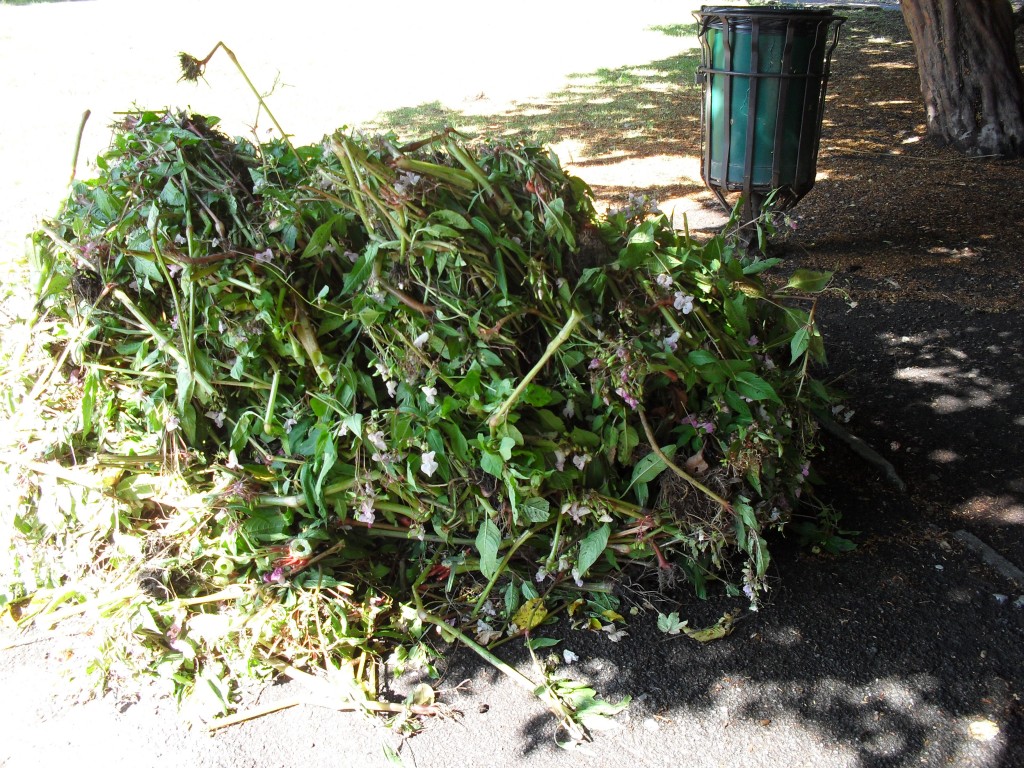