The one with the new recruits

Hard to believe a month has passed since we were in Plough Lane but it was indeed cleanup time again on the Wandle last weekend.

For August, 49 of us gathered in King George’s Park in Wandsworth, ready for some cleanup action. We had a number of new faces with us this month including some passers-by who found us in Plough Lane back in July, a local rugby team and a team from EquiLend.

After the usual Health & Safety Briefing we got started. The first task for us was to make a path to the river. As we normally visit King George’s Park in the winter, we were suddenly faced with a forest of nettles and brambles. Using a spade and loppers, Phil and Guy created the first path down to the river and our wading team set off. 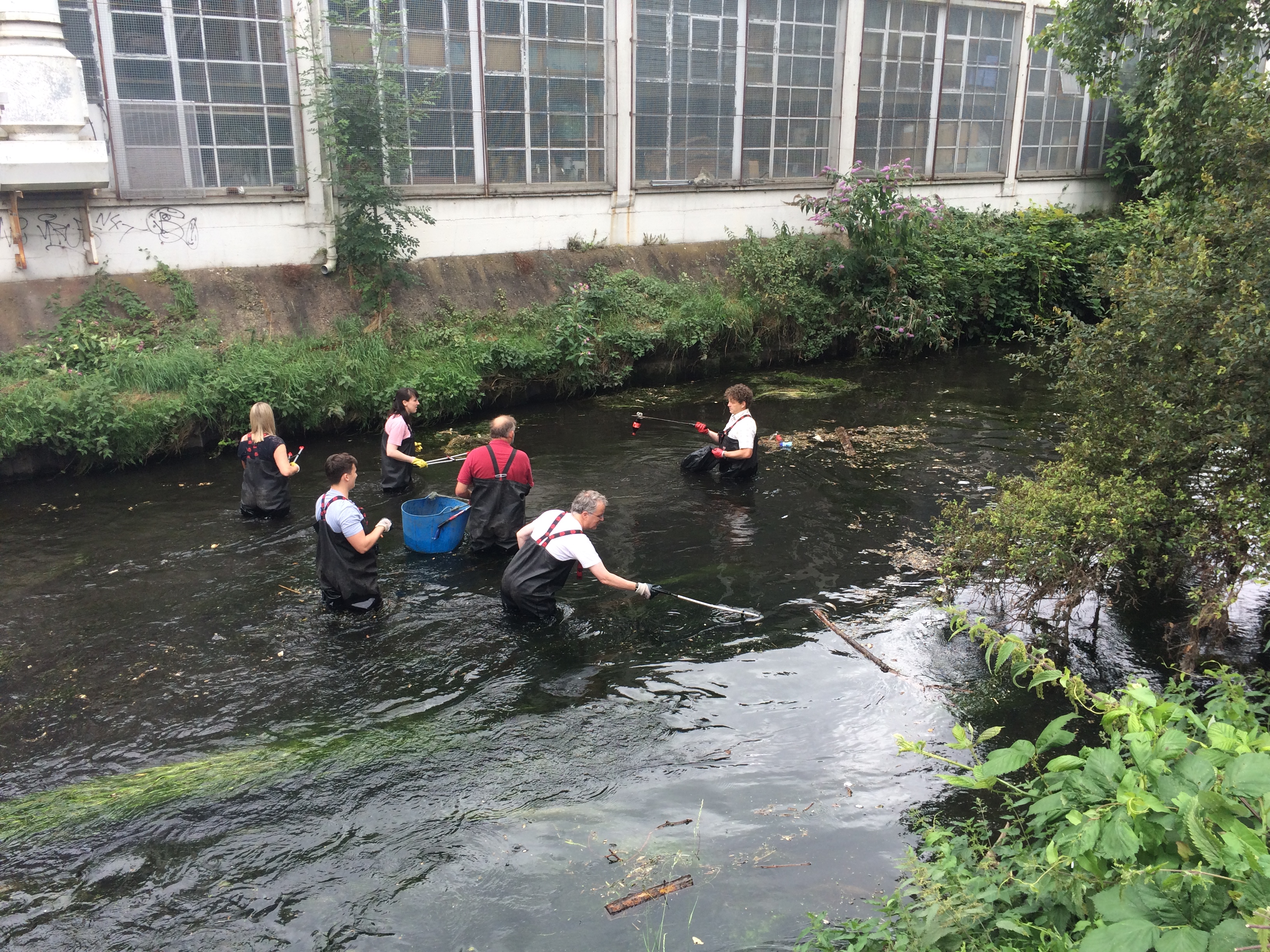 While this was happening, I sent a second team to create similar paths through the nettles at the other two gates, ready to wheelbarrow the rubbish. It was not an easy task!

With the waders in the water, it didn’t take long for the rubbish to start coming out. Behind the willow trees, large amounts of debris had collected such as drinks cans and bottles. 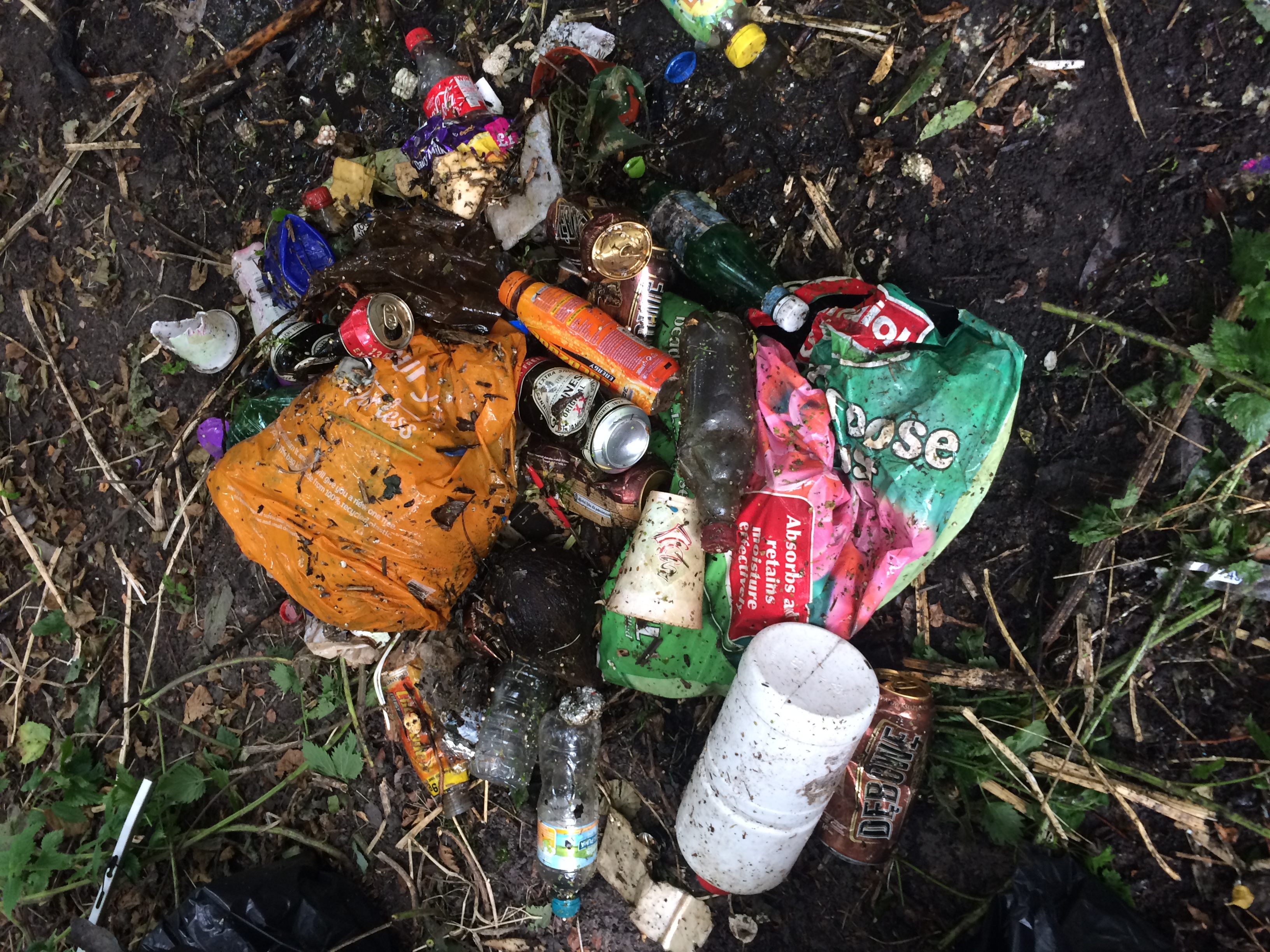 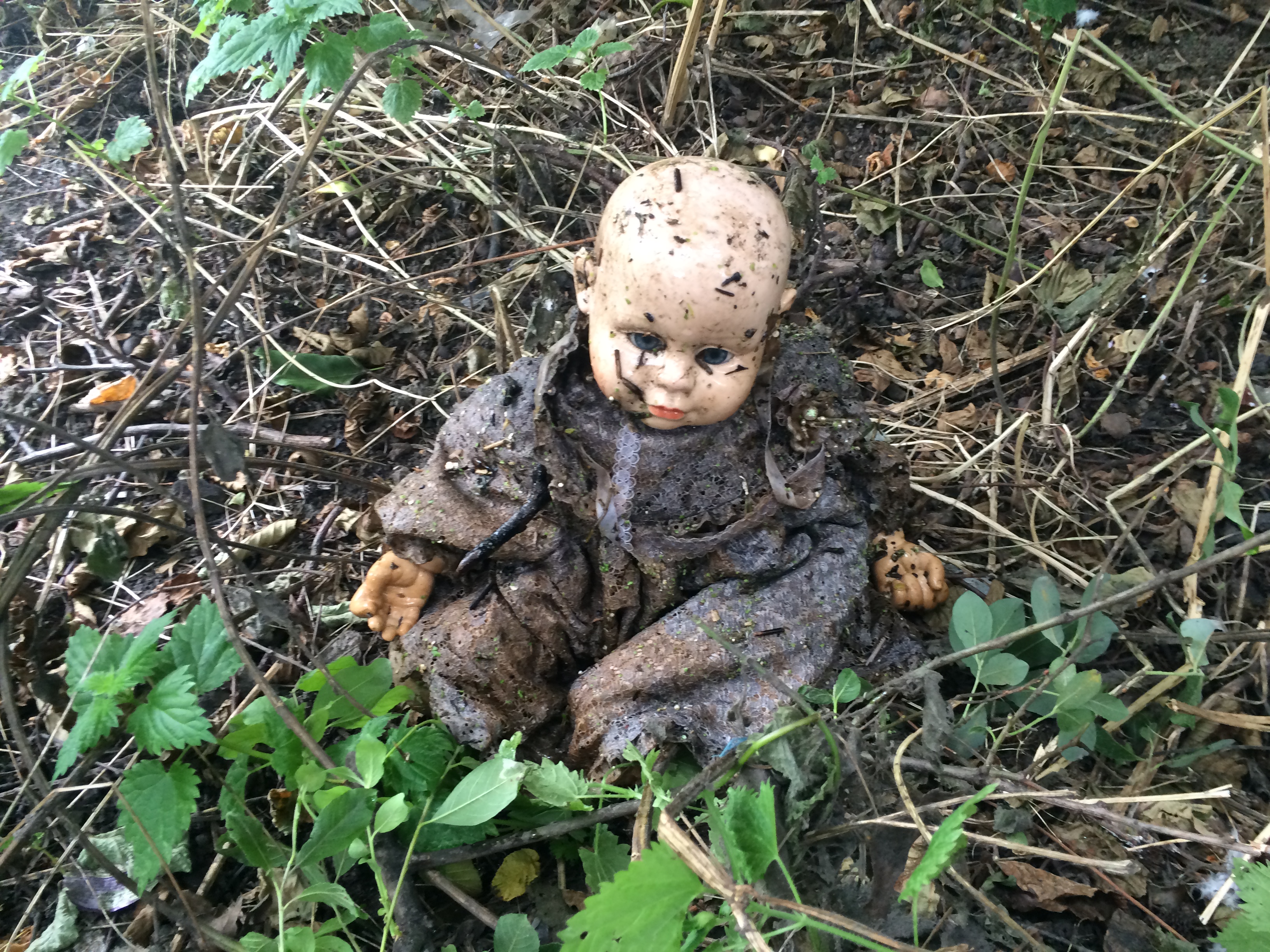 Our bank support team and litterpickers stumbled upon a large stand or two of Himalayan balsam. As balsam seeds can be transported downstream by the river, it is best to tackle this plant from the source of the river first, which we’re doing at Richmond Green, Beddington Park, Hackbridge and Culvers Island. However, when spotted it is always worth preventing it from setting seed so that when we do make it down to Wandsworth, we have less to tackle. So a small team of volunteers pulled the plants up, using bin bags to catch the seeds. 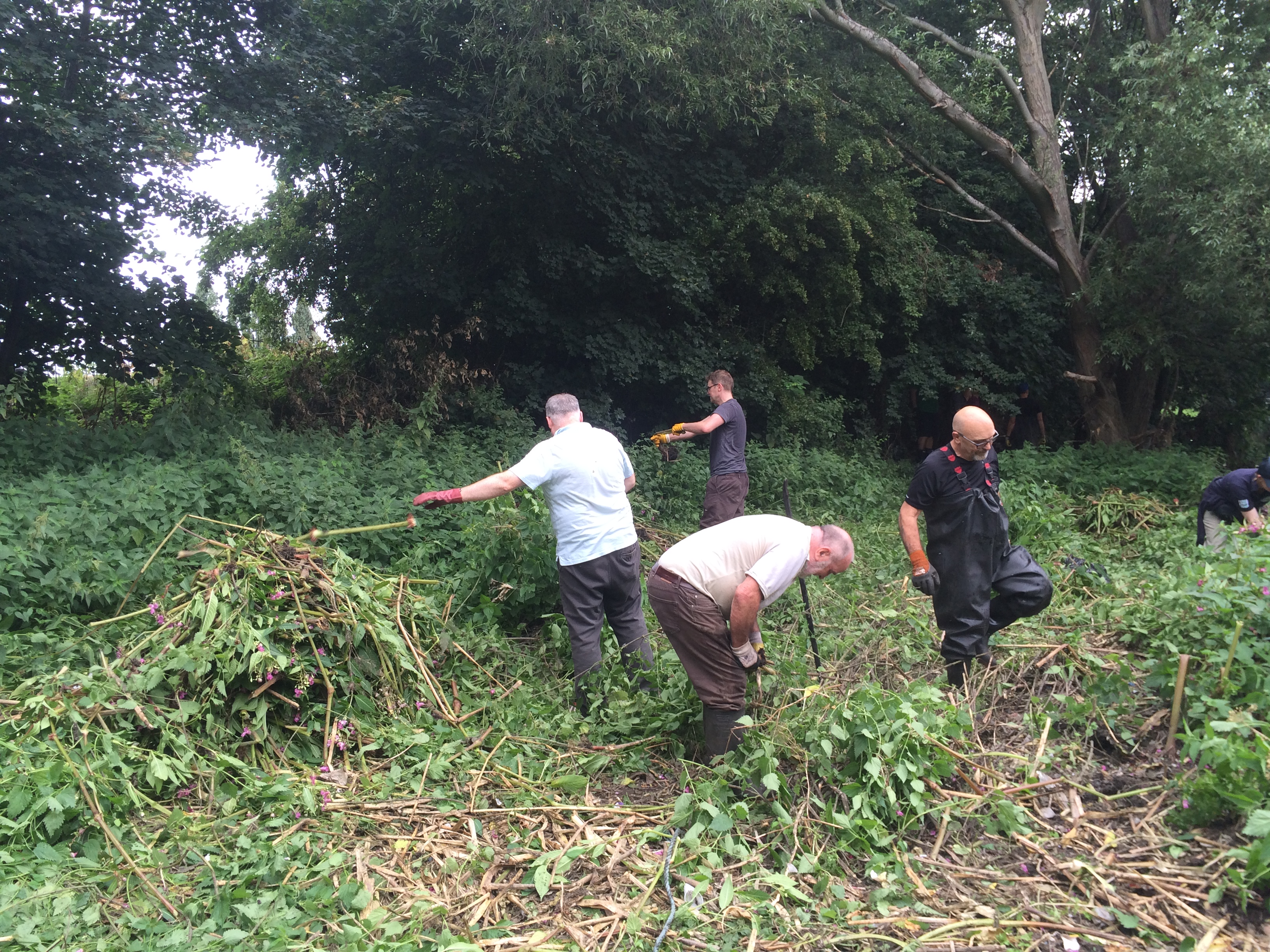 Jane made sure every last plant was found by checking from the river itself. 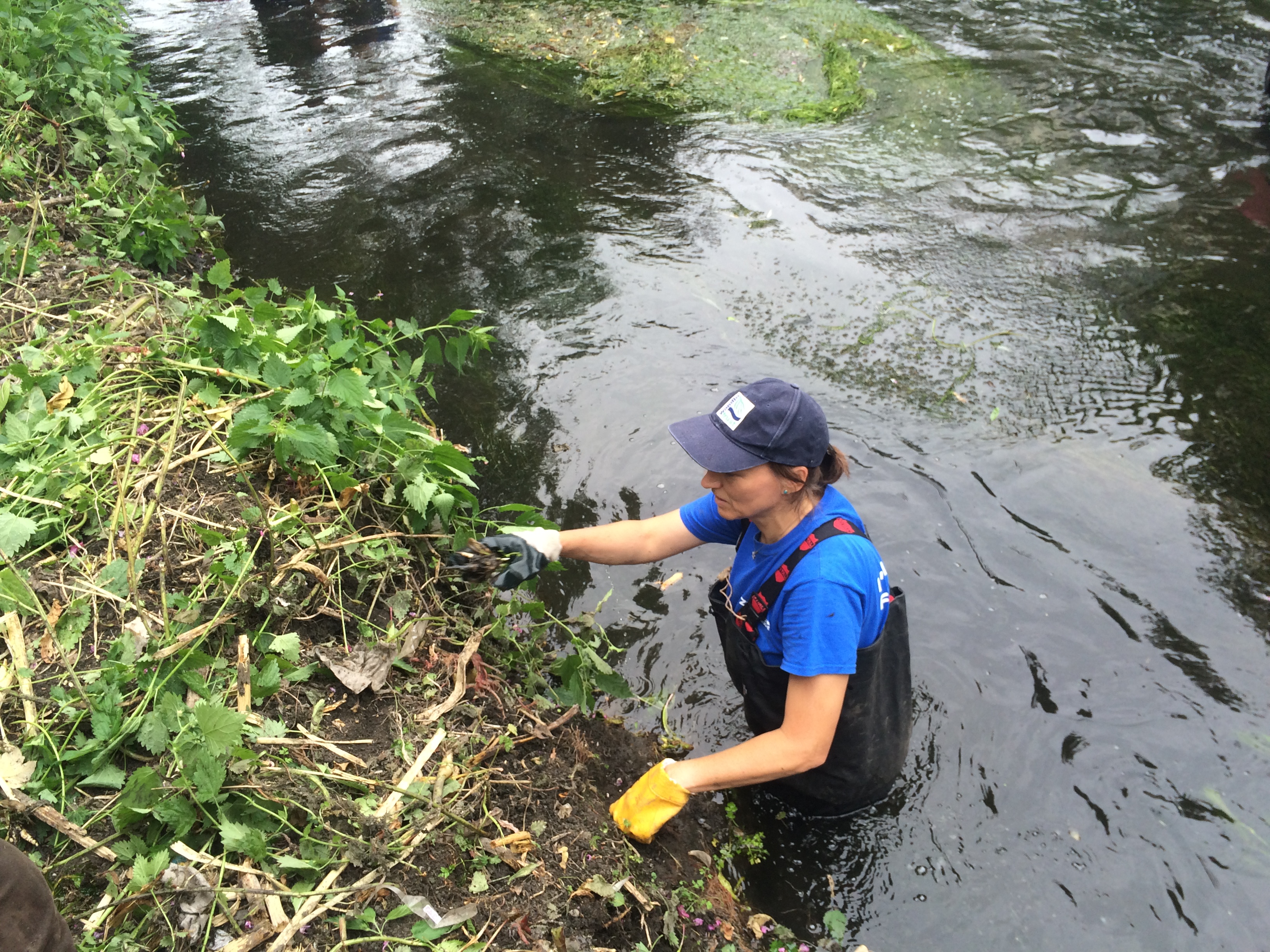 By lunchtime the rubbish pile was huge and so I decided to have our break a little earlier, not that anyone would get out of the river!

Finally, 49 people gathered at the tent to have tea, coffee and homemade cake kindly made by Sally and Ann. We all had a rest and basked in the sunshine which had come out in full force since the morning. 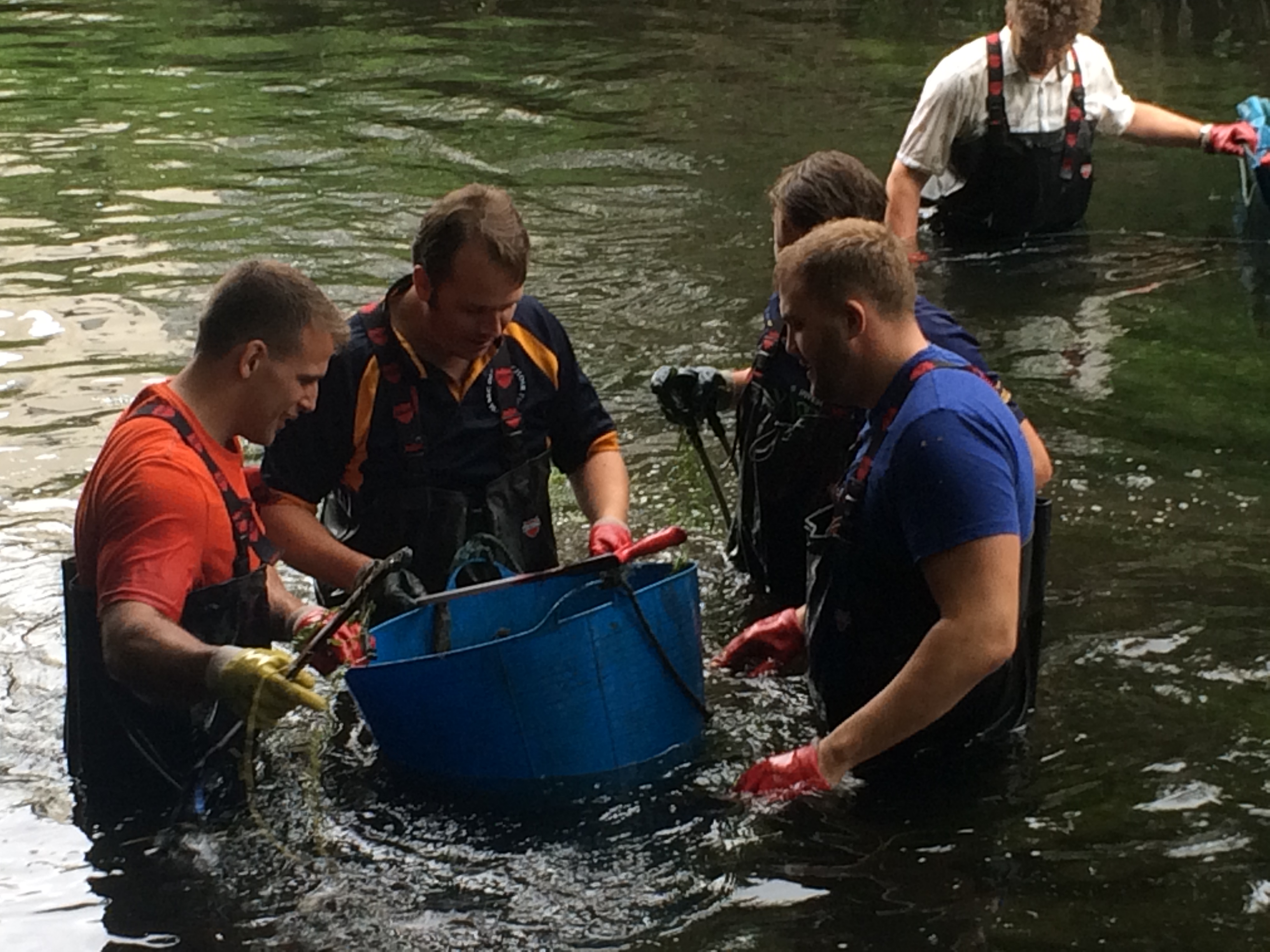 It wasn’t long until everyone wanted to get back to work, most likely seeking the shade of the river! So we went off again… 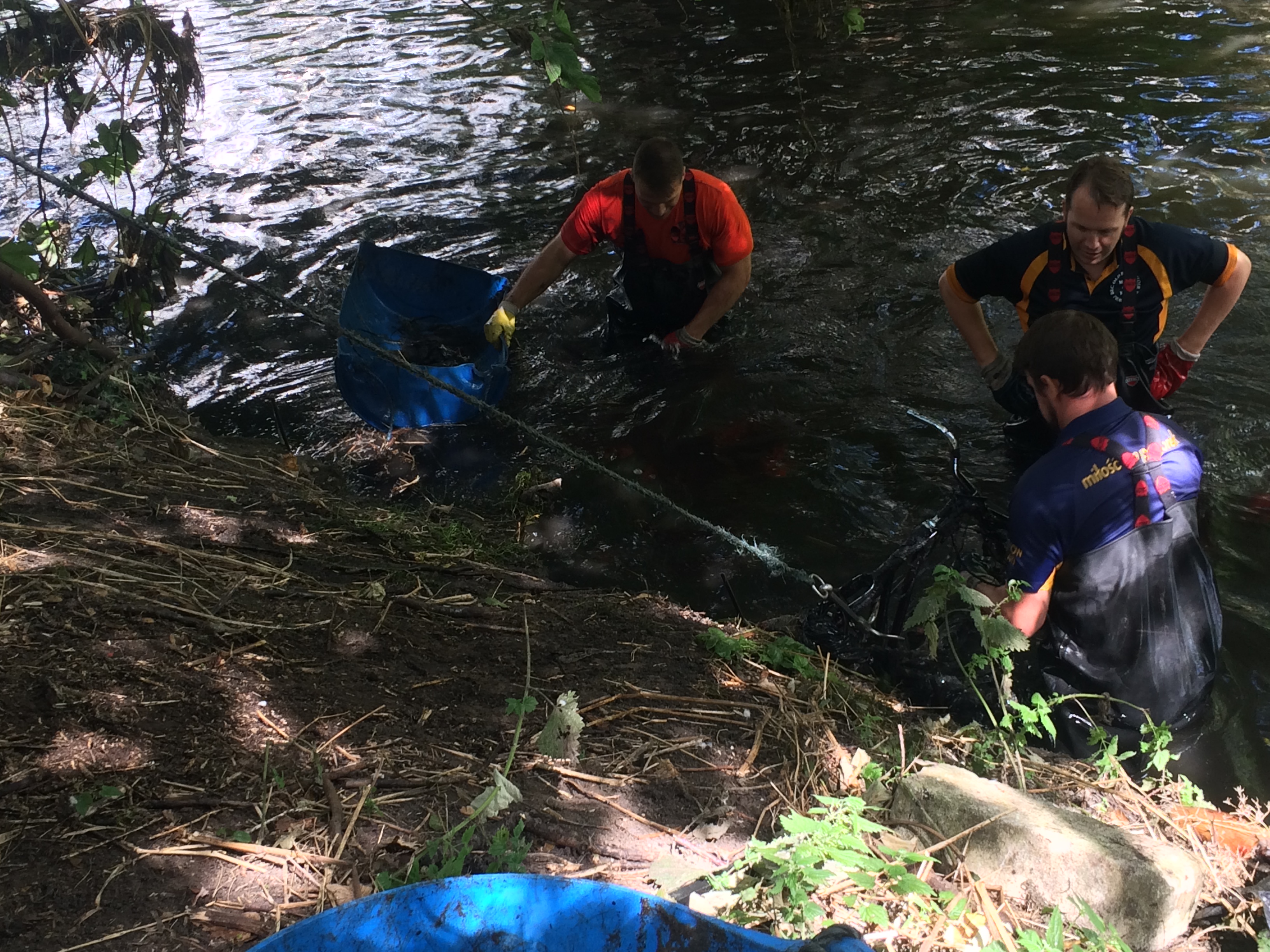 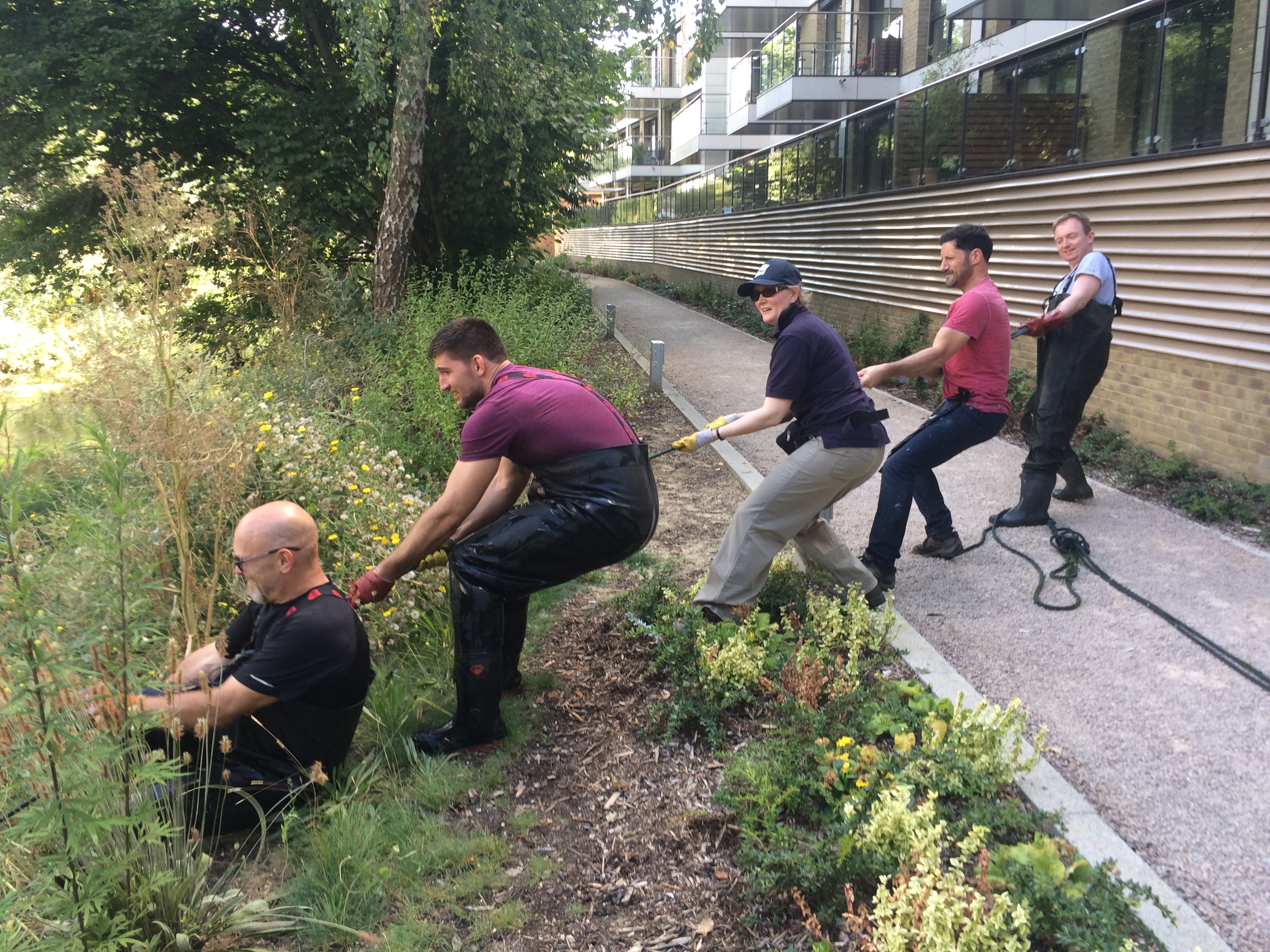 Whereas the rest of the waders were slightly further upstream tackling a giant lorry tyre! 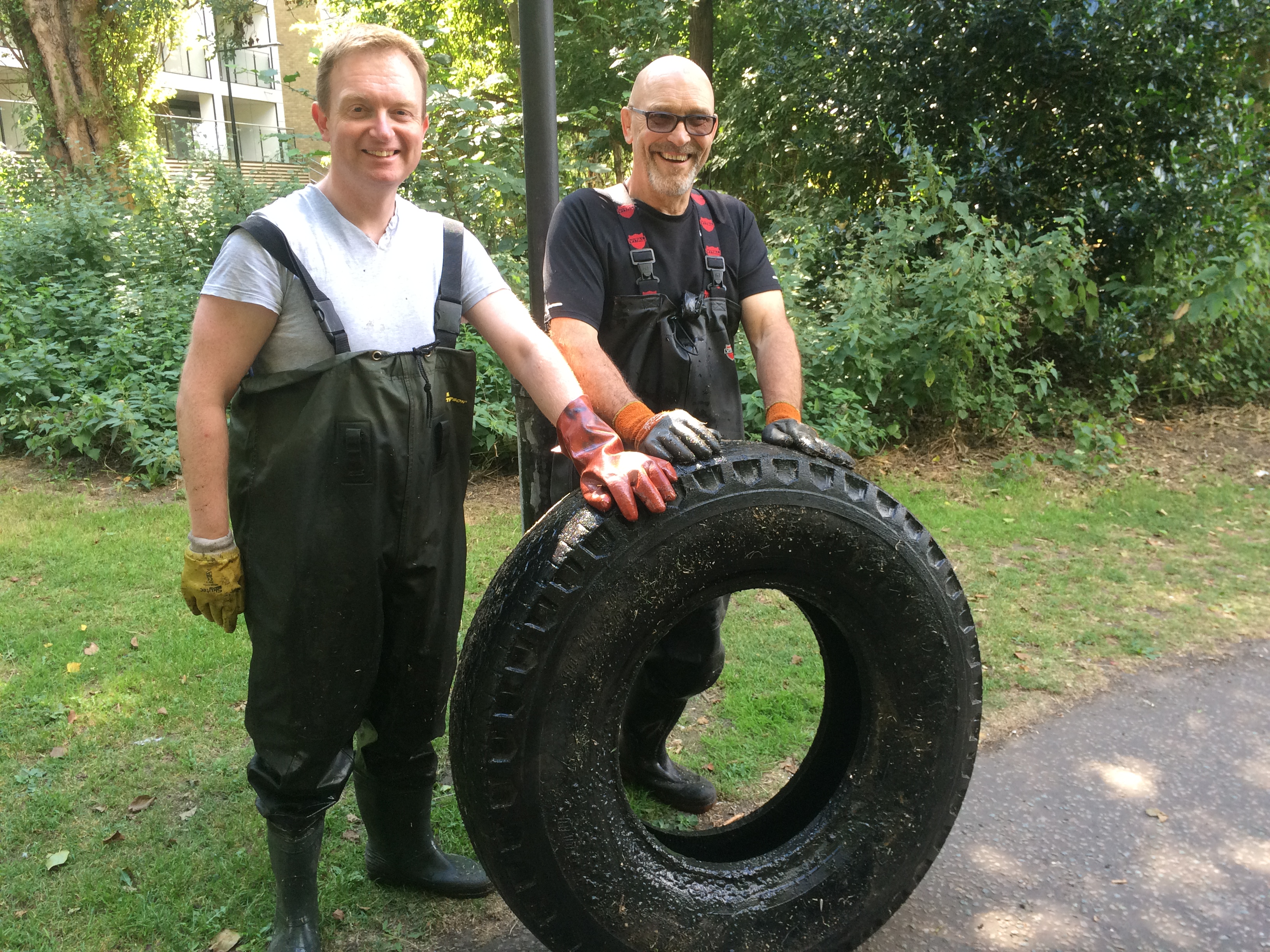 By the time is came around to three o’clock I could get neither team out of the river!

The rubbish pile at the end of the day was an impressive pile for just 300m of river.. 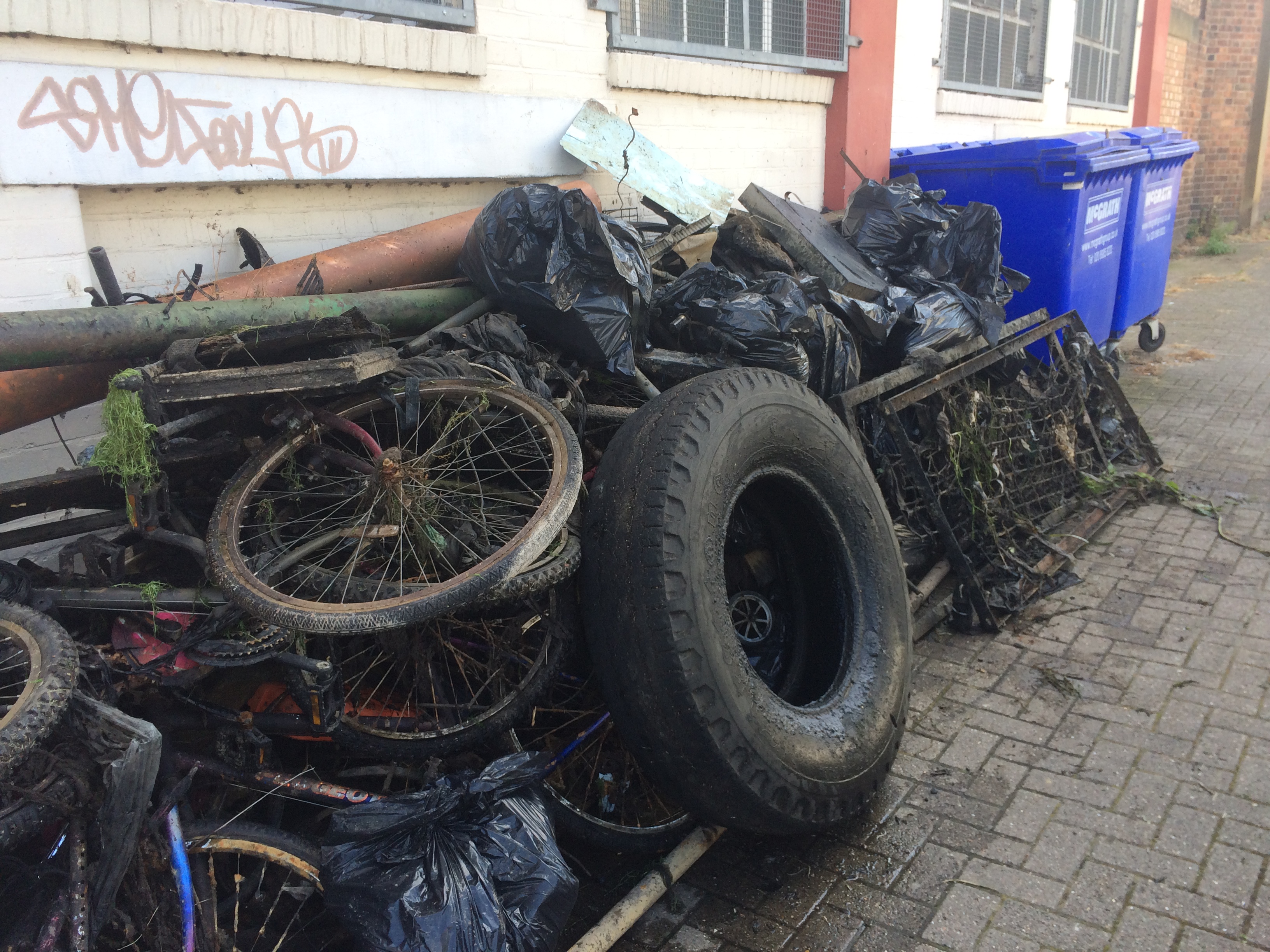 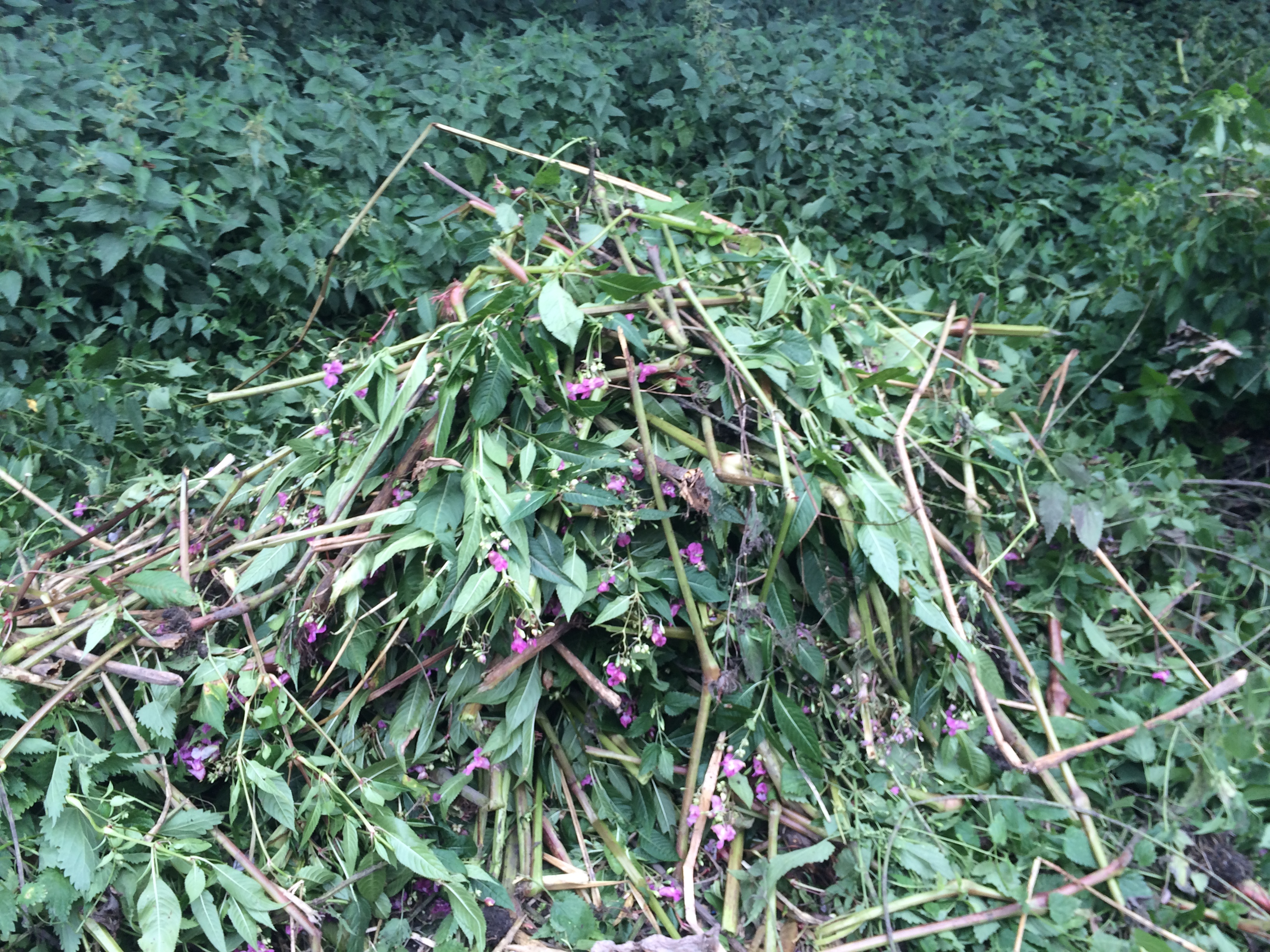 Huge thanks to the Living Wandle Landscape Partnership for funding the event as part of the River Guardians projects, everyone who helped unpack and pack up the van during the event, Rosie for supervising the Event Tent, Wally for helping supervise the cleanup, and the Waste Team at Wandsworth Council for organising collection of all the rubbish the next day.

So what did I learn from this month’s cleanup?   That when volunteers are determined, there is no way of getting them out of the river..