The one with the tin helmet and the surprise motorbikes

With a winter sun low in a cloudy sky, 38 volunteers assembled on the rugby pitches at Poulter Park ready to remove the rubbish which had accumulated in this stretch of the Wandle since our last visit in October 2011.

Having waded this stretch a couple of weeks earlier, Andy and I knew that there was at least one submerged motorbike and a mattress, but we weren’t prepared for what was to come… 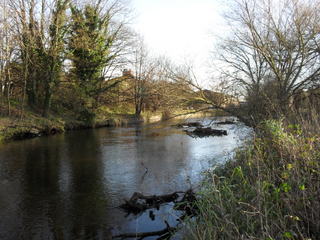 Fairly early on, everyone stopped to watch whilst Andy B dredged up what looked like a First World War tin helmet from the river: 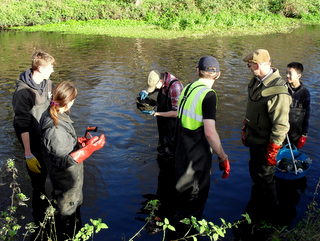 Given that it was completely covered in invertebrate life, it looked as if it really could have been there since that time. The helmet was taken away by one of our volunteers for inspection by the heritage experts at Carshalton’s Honeywood Museum who, we hope, will be able to determine its past.

Joining us for the first time were four young men from Carshalton Boys’ College, who, as part of their Citizenship course work, wanted to do something positive to combat increasing volumes of litter in their borough generally, and in the Wandle in particular: 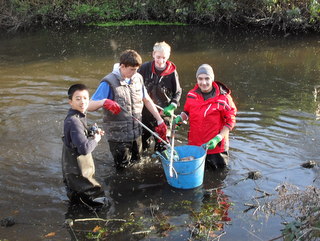 Seemingly oblivious to our volunteers excavating the river bed for rubbish behind him, a fearless little Christmas robin hopped about in the trees between the Wandle and our suitably tinsel-hung gazebo… 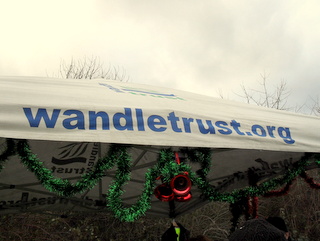 … where we welcomed the chance to stop at about 1pm for tea, coffee, leek and potato soup with hunks of crusty bread, ginger cake and mince pies, all produced by Sally and Jo: 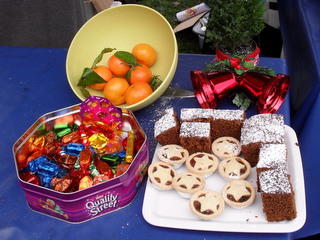 Whilst we were munching on this lovely festive feast, volunteer and the author of the River Wandle Companion and Wandle Trail Guide, Bob Steel, signed copies of his book, while Sally sold packs of our charity Christmas cards, and Jo sold copies of the Wandle Cookbook – which all made for great last-minute stocking fillers!

After lunch, the other Andy B suggested that we visit a stretch of the river further downstream towards Watermeads, and, lo and behold, the remains of six motorbikes were discovered and hauled up from the rather murky water: 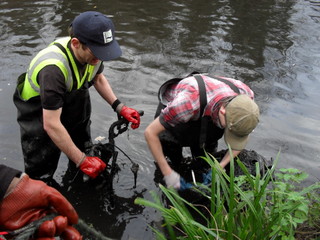 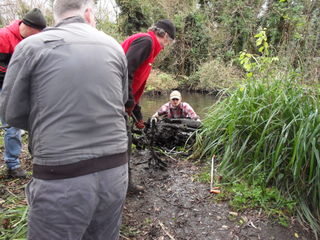 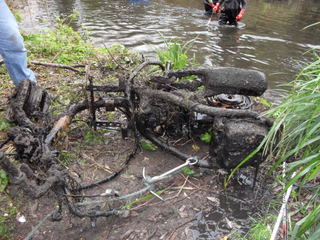 Getting the bikes to the dump site was a task of truly Sysiphean proportions, since the Wandle Trail was muddy and uphill to boot, and the wheels of the flatbed trolley small and prone to dig in.

However, fuelled by determination, cake and mince pies, our volunteers managed it with ease! 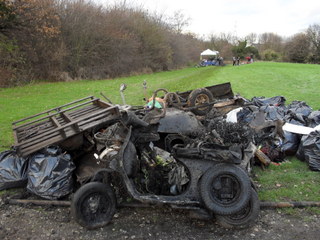 Our thanks to David at Sutton Council, to Bill and the Parks department staff who organised and collected the rubbish; to Peter Hegarty, Chairman of Mitcham Rugby Club, who said we could use the facilities in their clubhouse (much needed in the cold weather!); to Jo Horrobin and White Light Ltd who transported another 9 pairs of waders to and from the repair shop…

… and, of course, to our volunteers: 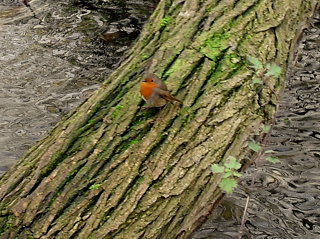 This event was supported by the Sutton Community Fund.

Merry Christmas and a Happy New Year to all our wonderful volunteers!