The one with the return of Miss Evans…

The year has gone very fast indeed and before we knew it, the last cleanup of 2015 was upon us. For December we went to King Georges Park in Wandsworth. With the Event Tent decked with tinsel and my reindeer antlers on, I was joined by 30 volunteers on a chilly Sunday morning. After the usual Health & Safety briefing we got started, with half of us getting in the river and the other half working from the banks.

Within 10 minutes, a bicycle had been sighted, collected and placed on the start of the rubbish pile by Santa. An excellent start. 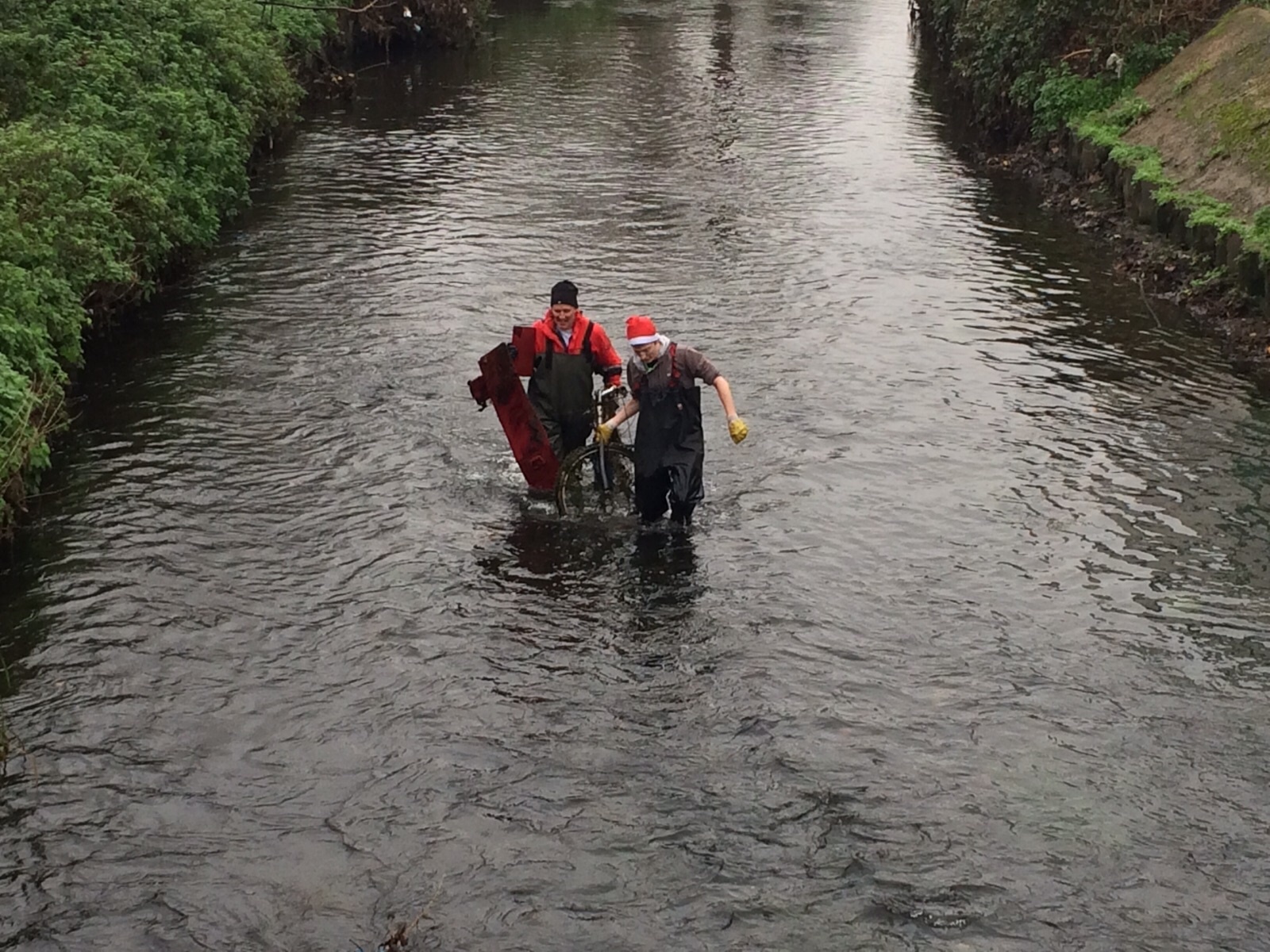 While on the banks we were discussing Christmas shopping, and how far behind we all were, with the idea that maybe the Wandle could be our solution? Although I imagine we’d be less than impressed if Santa’s sack really was filled with soggy gifts from the Wandle. Olaf flip flop anyone? 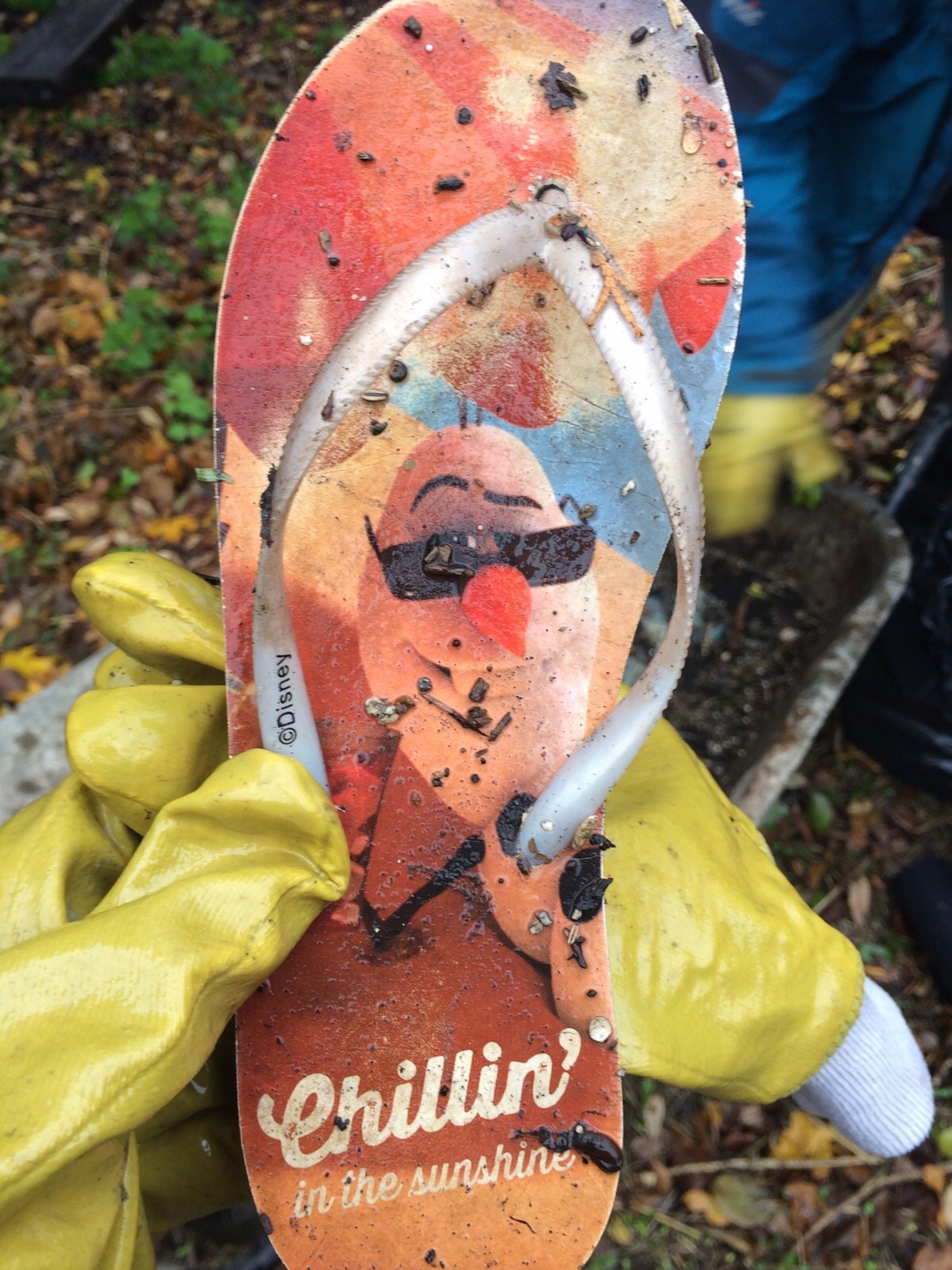 To distract us all from the cold, we became magpies, closely inspecting what we were pulling out of the Wandle, looking for some special Christmas finds. I discovered this old style Fanta can which no one else seemed quite as excited about.. 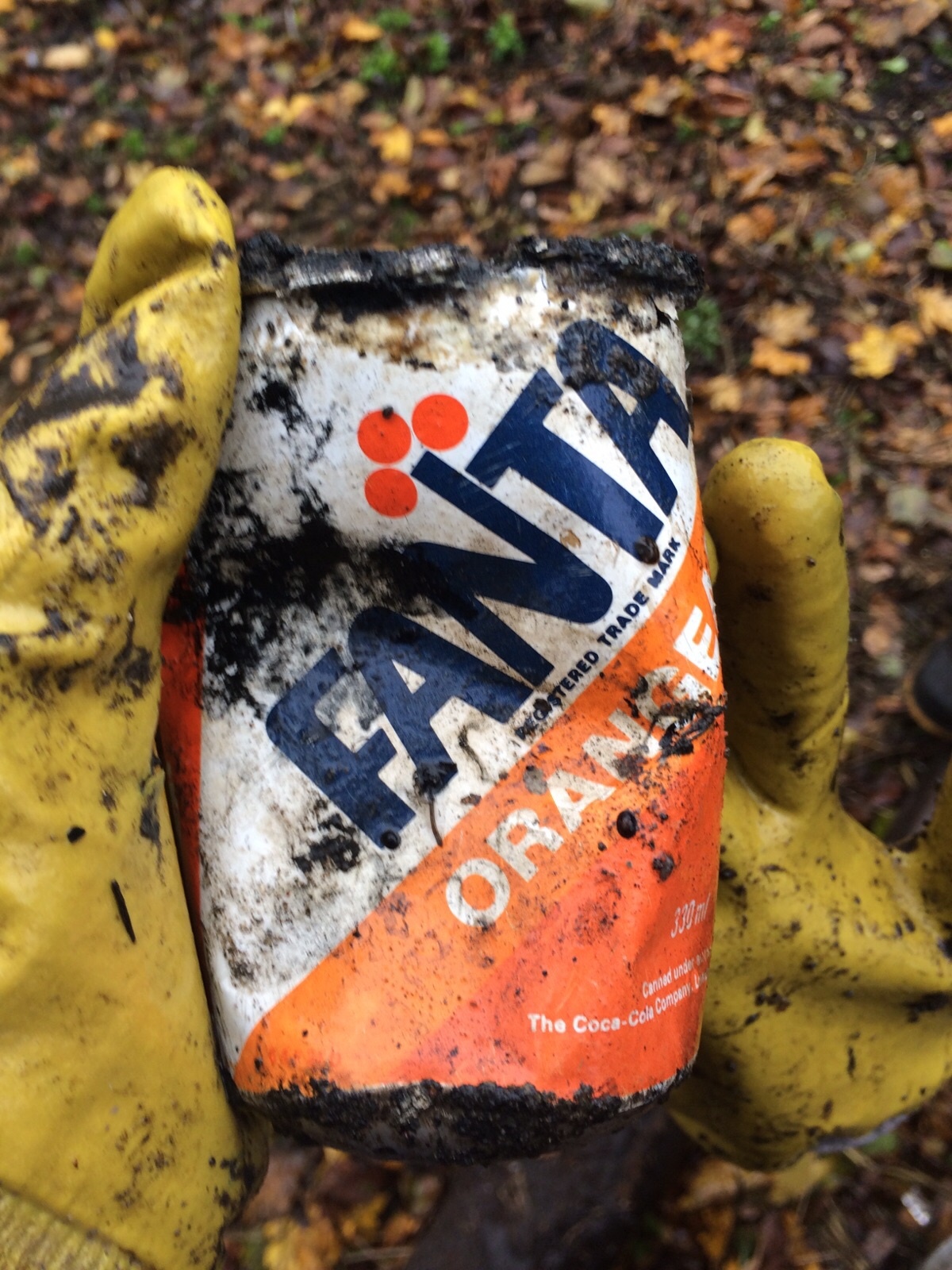 We found the usual coconut… 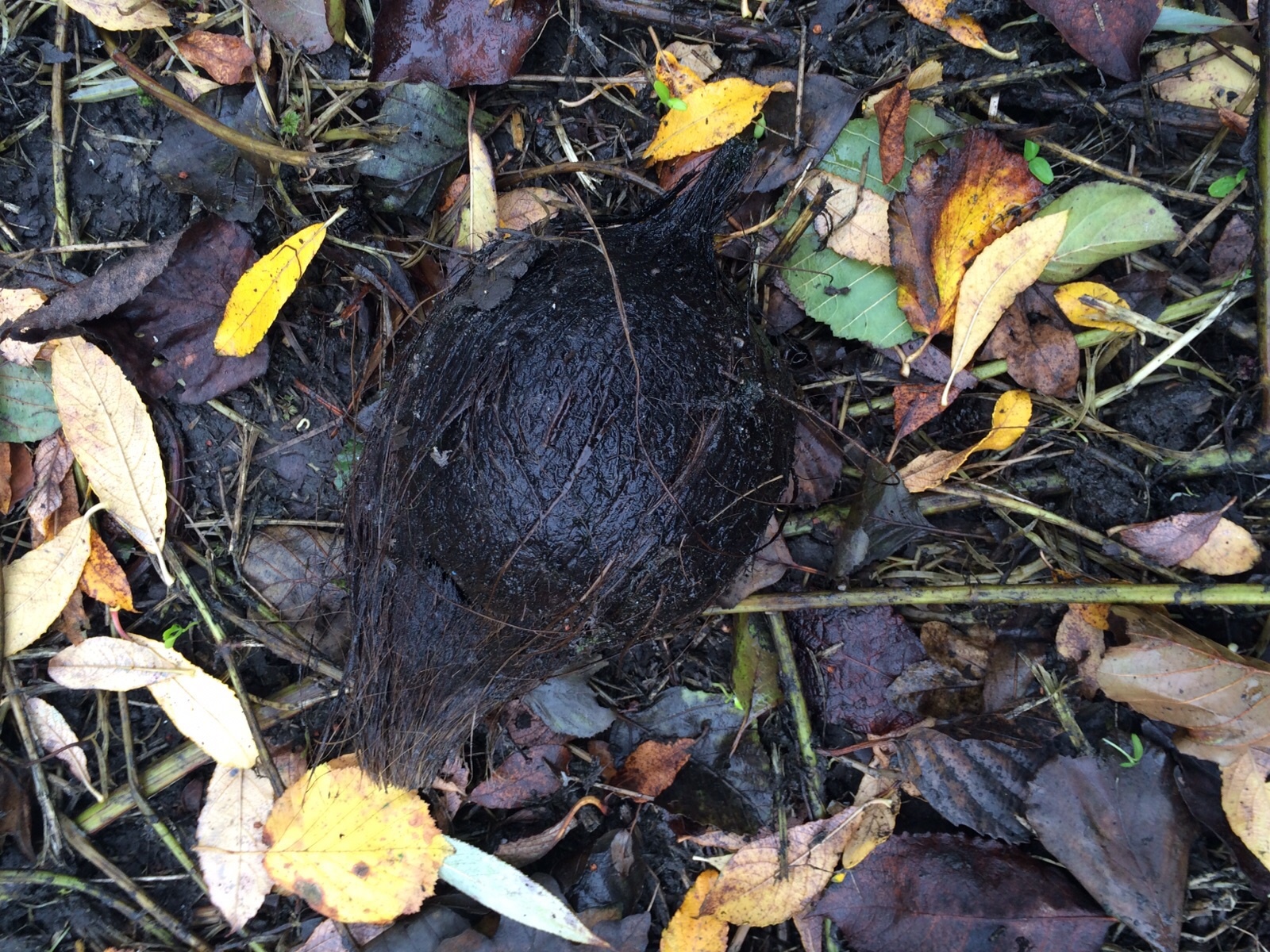 As well as what we believe was a Nativity scene Mary, minus the head… 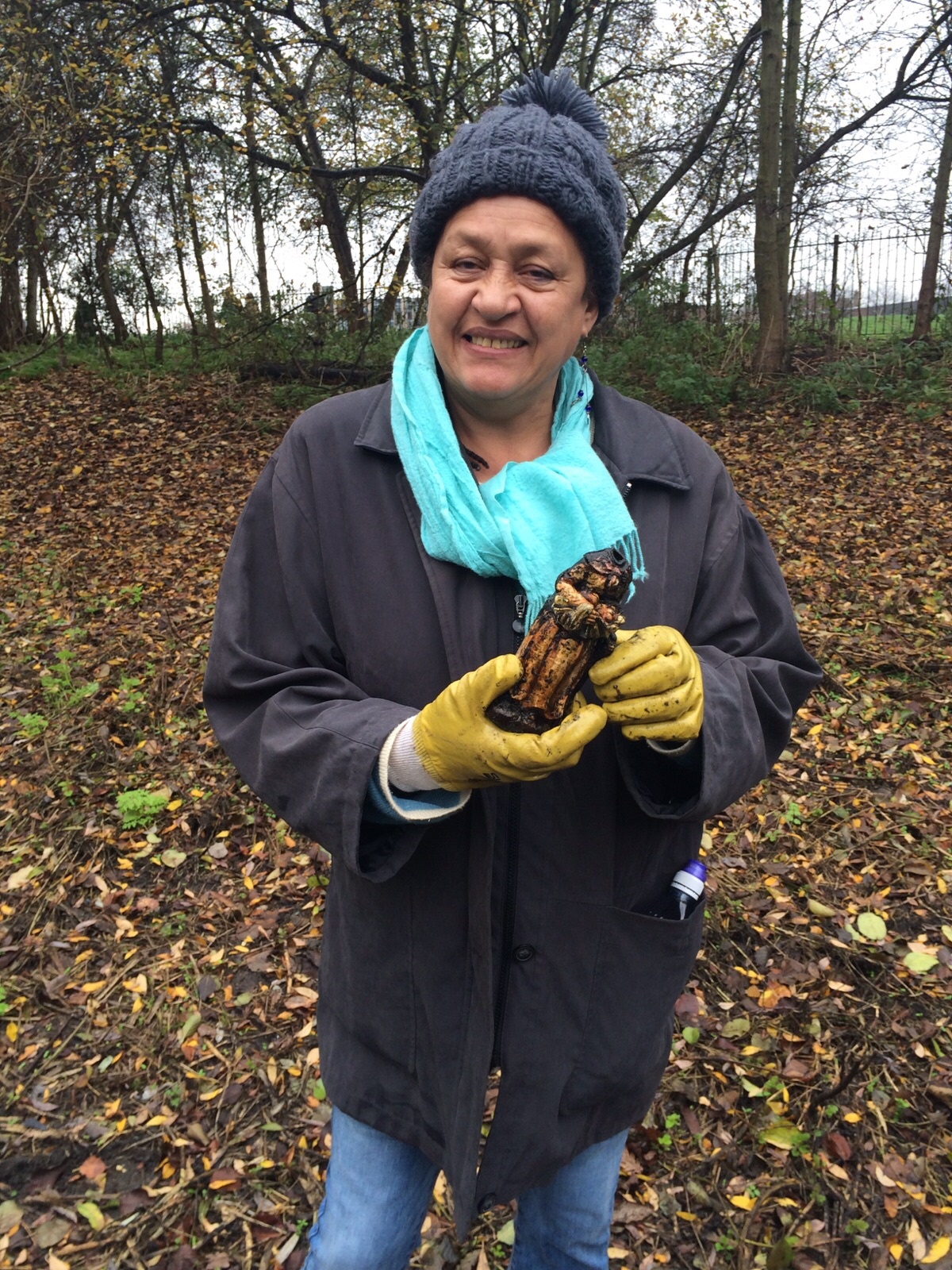 By 1pm, we were all ready for a cup of tea to warm up and to try some of Ann’s carrot cake which she kindly made for us all. Much to our delight, we were visited by a Christmas Angel during lunch – Erica Evans! As lots of our volunteers will remember, Erica organised our Wandle cleanups for many years and happened to be visiting London this weekend, so she thought she’d pay us a visit!

We didn’t stop for long with the chilly weather, and so back in the river we went. The waders continued upstream to the next bridge, clearing over 300m of river. Some afternoon finds included:

This metal chair, which I have been informed is a welding chair. 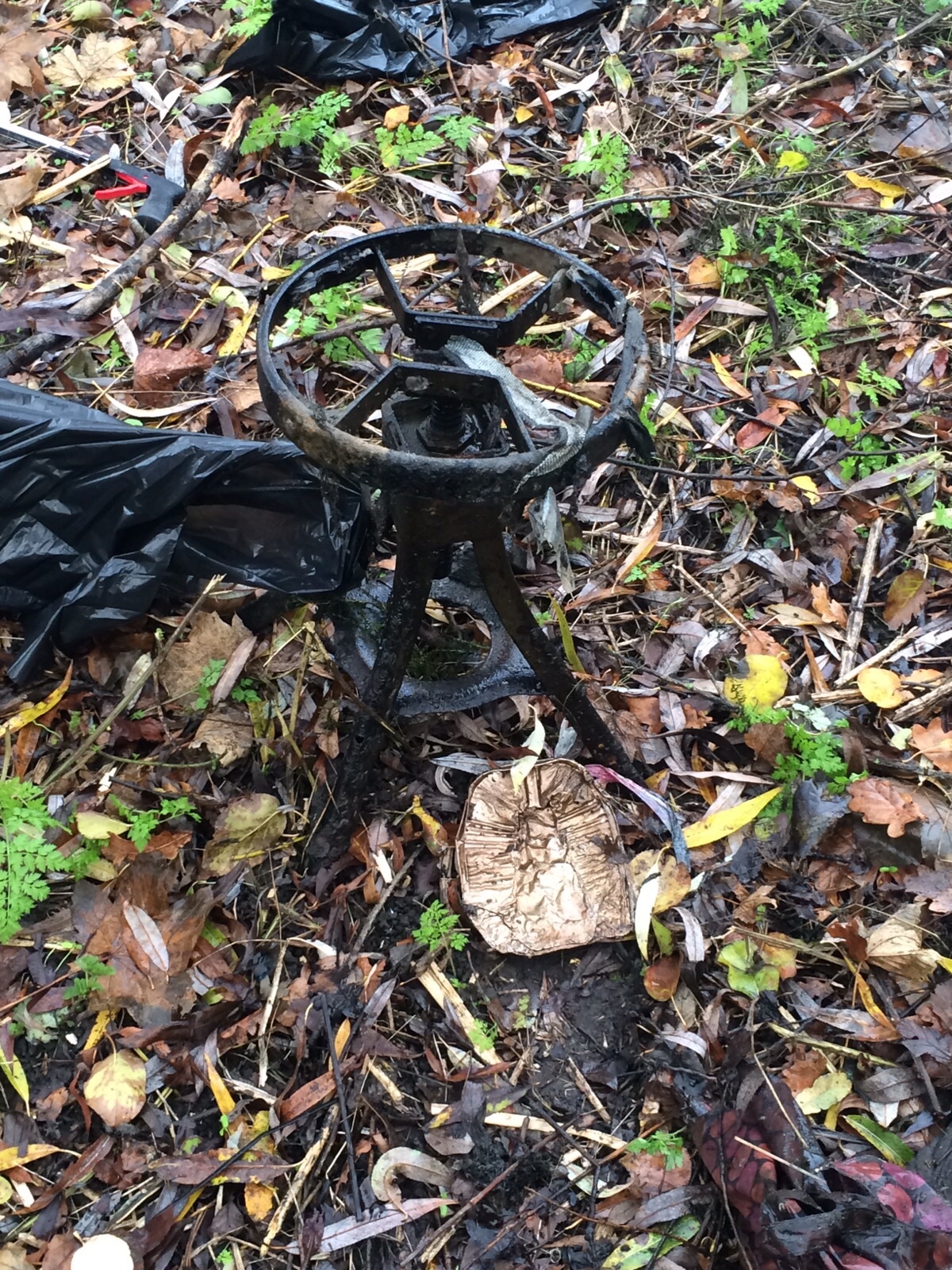 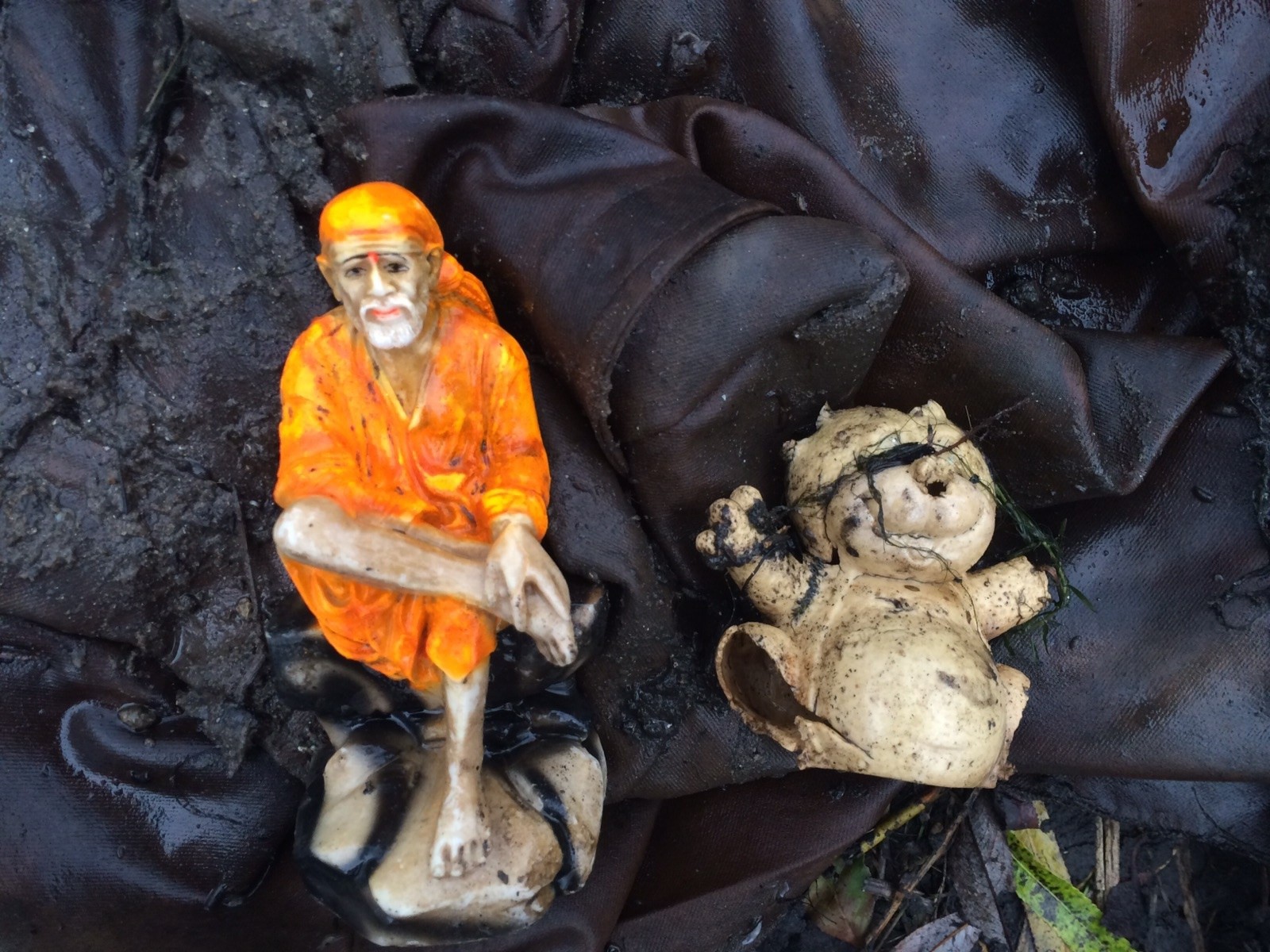 And some large heavy shed roof sheets which had absorbed so much water they were a real challenge to get out so late in the day. Trust Derek to find something just as we were finishing up! 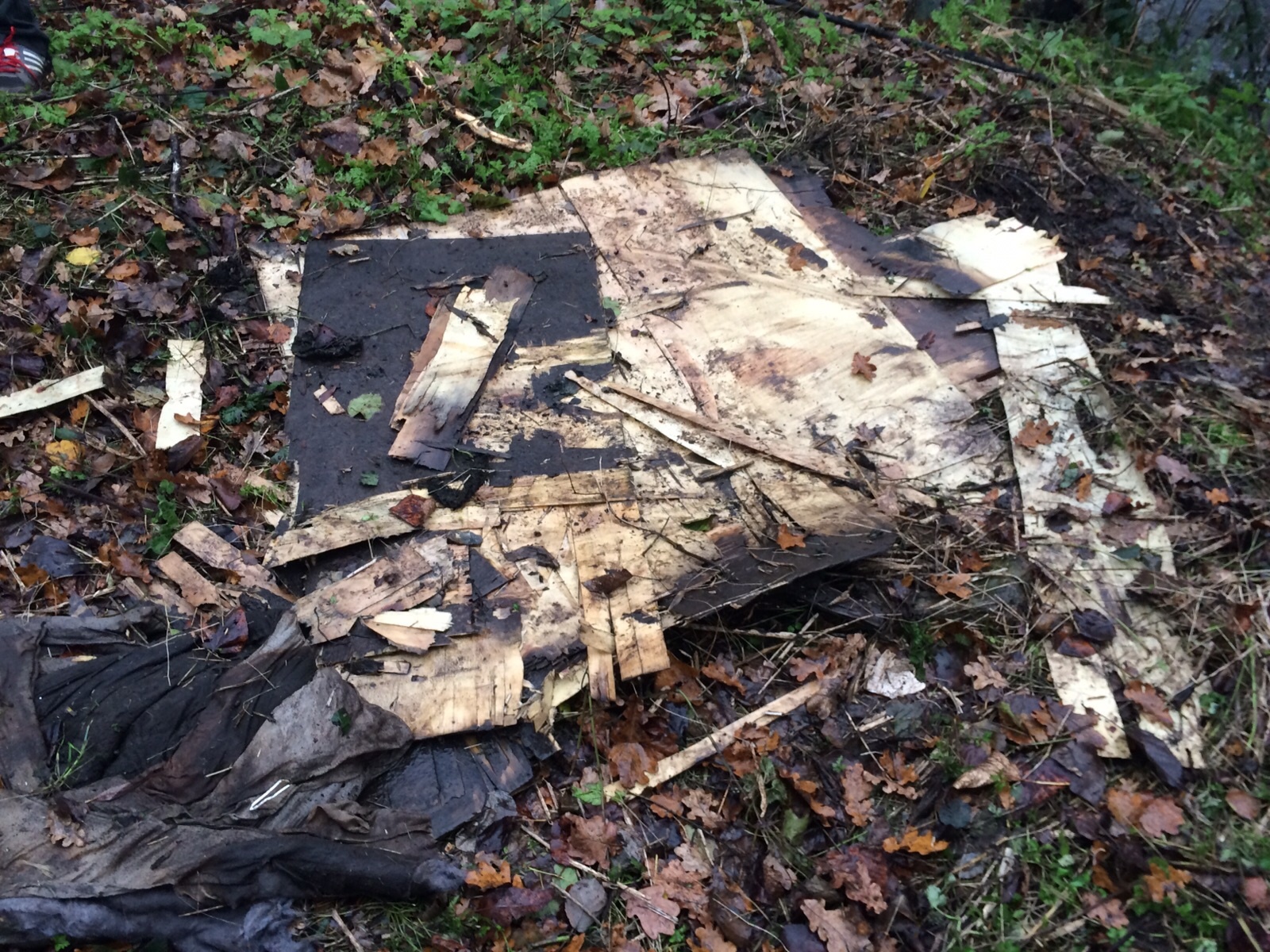 Last year 518 volunteers pulled out 8.5 tonnes of rubbish from the Wandle, donating 2012 hours of their time to the cause. Have we beaten this for 2015? Stayed tuned over the Christmas break to find out! 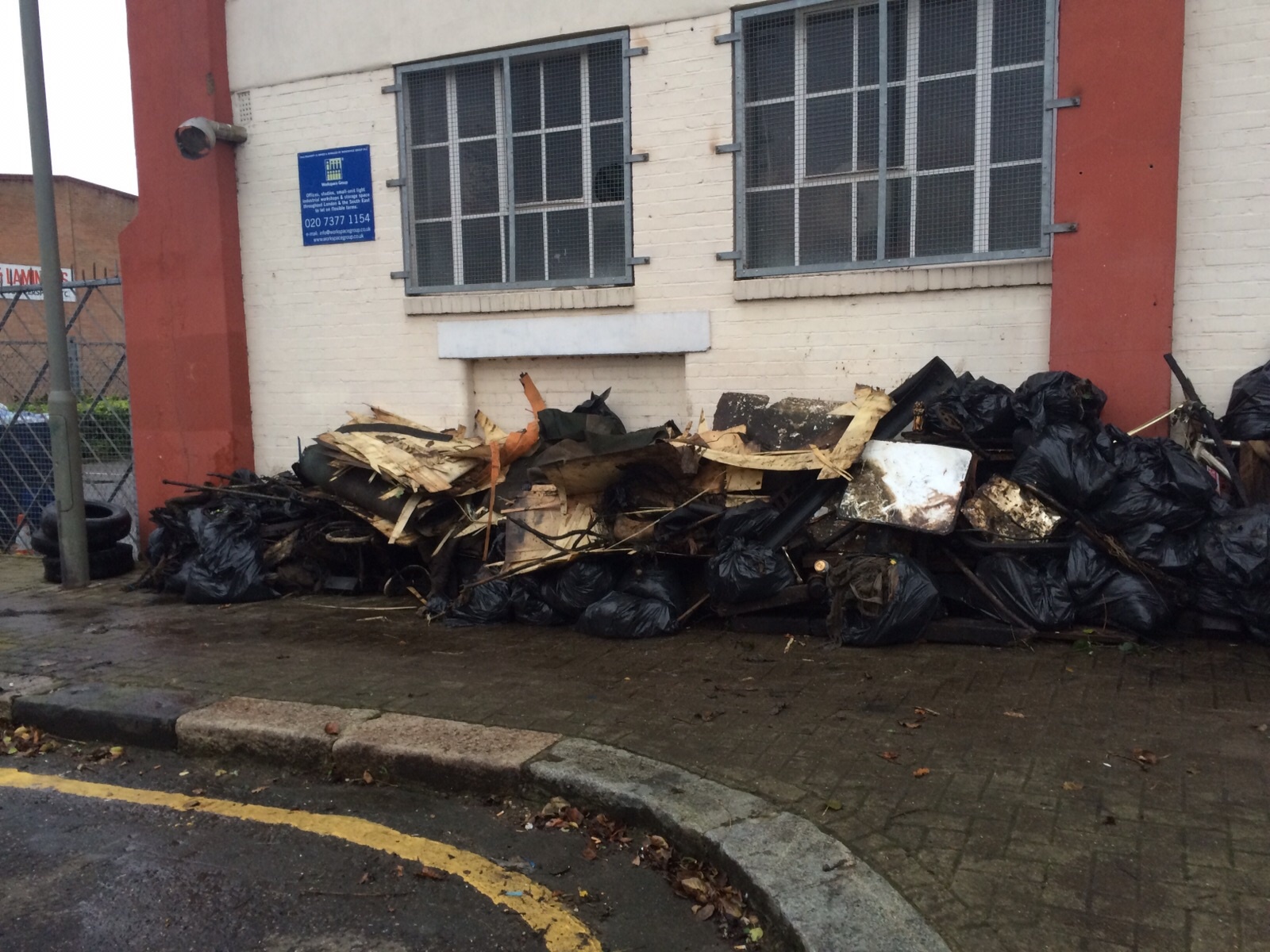 Huge thanks to everyone who helped unpack and pack up the van during the event, Ann for catering for our volunteers (cheese scones and carrot cake!), Wally for supervising the Event Tent and the Waste Management Team at Wandsworth Council for organising collection of all the rubbish the next day.

So what did I learn from this month’s cleanup?   That no one reads the email blast! My request for Christmas attire was missed on everyone.. 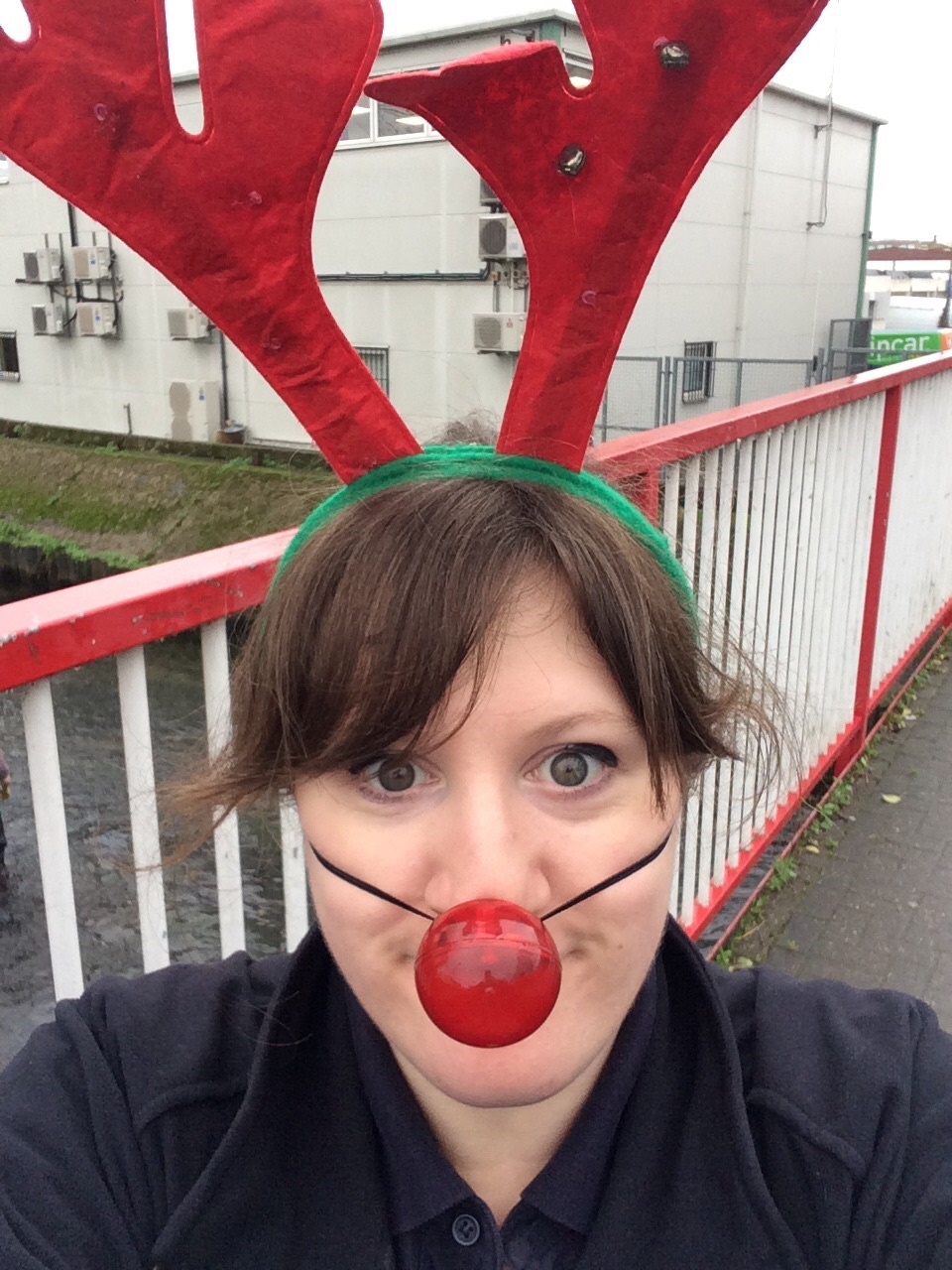