Our numbers were swelled on this cleanup by the welcome addition of some youngsters.  As can be seen, they happily got stuck in at the very littered stretch of river flowing from Culvers Avenue to Buckhurst Avenue in the Borough of Sutton. 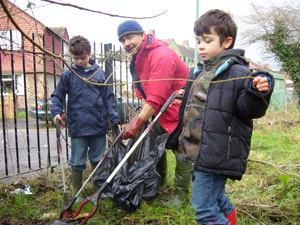 They also proved to be more sensible and careful than some of the adults, two of whom apparently got rather damp in the river!  Younis was particularly proud of his efforts. 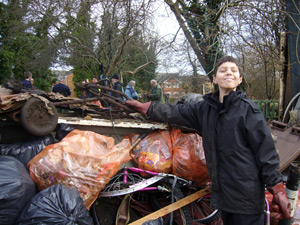 Many hands made light work and the whole area was eventually transformed.  Not only were huge amounts of small litter cleaned up but also larger items including bicycles, motorbikes, a recycling wheelie bin, pieces of tables and chairs and (against my better judgement – thank you Rob) a sofa! 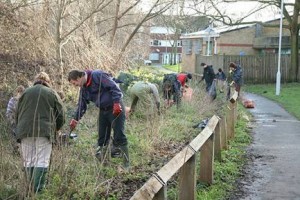 Duncan took some very impressive photos that are very much worth taking a look at – http://www.duncansoar.com/wandlecleanup – but the photo below proves that he also got his hands dirty! 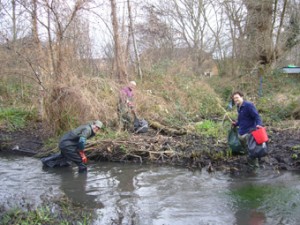 The Greyhound pub was our chosen drinking venue on this occasion but may not be so again, given its policy on under 18s…