What a beautiful day and what a turnout – over 60 volunteers participated in this cleanup!  Many hands made light work of the littered, shallow pretty stretch of the Wandle just downstream from Waddon Ponds running down to Beddington Mill.  It was great to be joined by so many locals, both young and not so young. 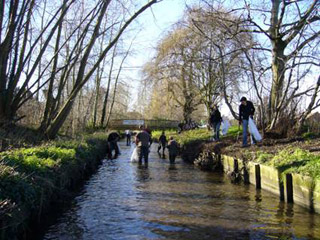 We were also joined by a photographer shooting the front cover of the next edition of Sutton Scene for Sutton Council, featuring PC Jeff Turner, and highlighting the excellent work being done in the community.  More great publicity for the Wandle Trust! 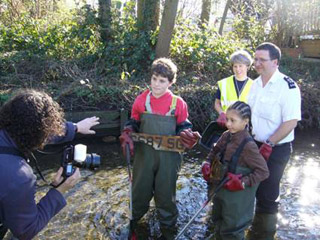 A somewhat disturbing find was a gun. It had clearly been in the river for some time and so was no longer functional.  However, Gill couldn’t resist taking advantage of a police officer – it’s a fair cop!! 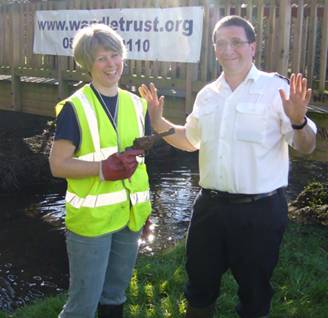 A substantial amount of rubbish was accumulated by the end of the day and everyone was very pleased with their efforts. 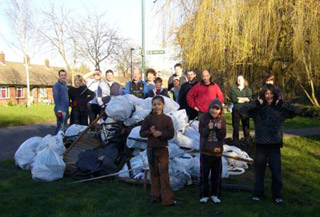 Some of us then adjourned to the Harvest Moon on Beddington Lane for a drink or two to celebrate the record breaking attendance.