The one with the dead trout and the six-shooter…

For the second time in as many months, the weather was surprisingly kind to us for this cleanup.

Sub-zero overnight temperatures melted away to leave the Riverfly monitors wondering if it was shirtsleeve time again – and while there was still a little snow around, the day felt almost warm. 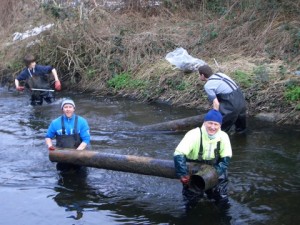 Decades of heavy rubbish emerged from this stretch of the river through Poulter Park in Sutton: 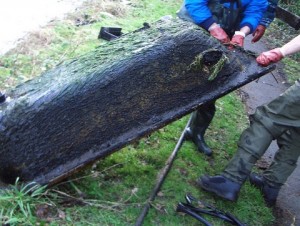 … along with a very large, very dead brown trout, which we packed in ice and handed over to the Environment Agency to be autopsied.

For those on the bank, it was a long haul up to the collection point at Goat Bridge… 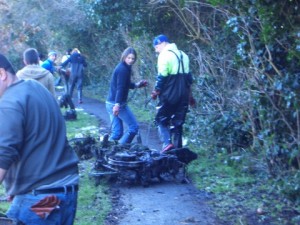 … but Nick and Jane found time for a civilised five minutes with the contents of someone’s kitchen dresser: 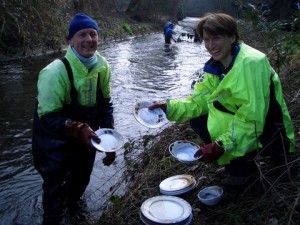 After our usual break for tea, coffee and home-made cake from Jo and Sally, most of our volunteers went back downstream to the mother-lode … 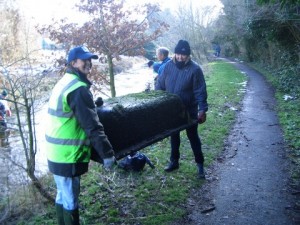 … and Wayne and I took the American students up to the Wandle Valley Nature Reserve, to retrieve several hundred bottles and beer cans discarded on the river banks, and sort them for recyling by Sutton Council (thanks to Sandra and her team!) 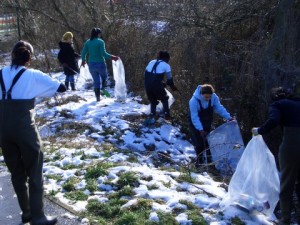 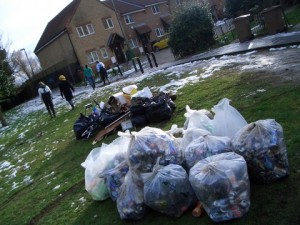 In fact, this led directly to the most dramatic find of the cleanup: what looked (and felt) like a genuine six-shooter, dumped in a snowdrift beside the river: 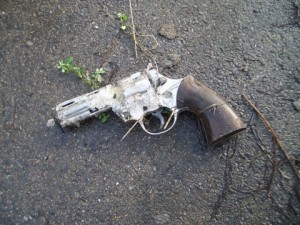 Unlike the last time we found a handgun here in Sutton, our friendly local bobby hadn’t turned out for his stick-up. 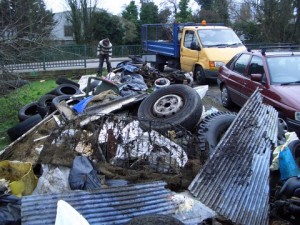 … and then relaxed into a pint with the friendly landlord of the Queen’s Head on Mill Green, the Pikes stayed resolutely sober, and headed for the nearest police station and the safe hands of the law.