The one with the Chinese New Year

In spite of relentless drizzle and near freezing temperatures, a valiant 49 volunteers turned up to brave the weather at our Kimber Road cleanup, just alongside the football pitches in King George’s Park. 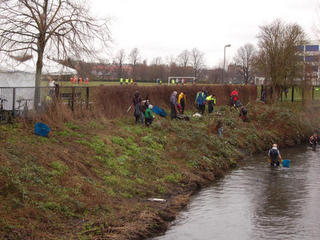 After the Health and Safety briefing, Andy took half a dozen volunteers downstream to tackle a short, shallow stretch while the rest of us clambered over the fence to work our way upstream of the road bridge.  Even though we’d been to this part of the river eighteen months previously, an astounding amount of rubbish emerged.

First up, there were two trolleys: the remains of a Royal Mail delivery cart… 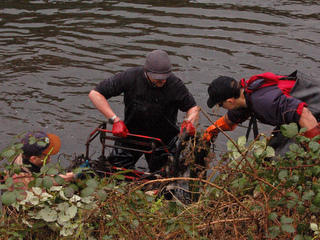 … followed swiftly by the first of 6 shopping versions: 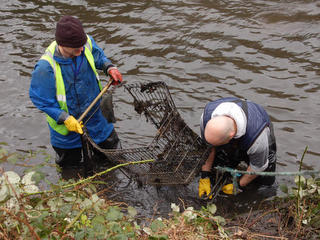 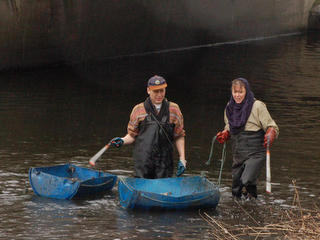 … our youngest and newest volunteer, Pierre, picked up all the windblown litter caught in the brambles on the bank, whilst his Mum, Valerie, held the bin bag: 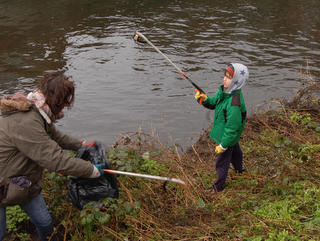 About an hour and a half into proceedings, Chris Gray, the Wandsworth Guardian’s photographer, came and took a few snaps of our volunteers in the river in order to draw some local media attention to the Western Riverside Environmental Fund (WREF) which is supporting  this and 7 other cleanups in the borough of  Wandsworth.

The story of this cleanup has duly been reported in the Wandsworth Guardian, as well as on our dedicated cleanup volunteer Mark’s own blog!

Grateful to submerge our hands into hot soapy water just before lunch, this little plastic duck was found nestling in the towels – nice weather for him! 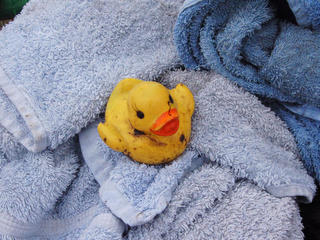 With an auspicious red Chinese banner fluttering above our heads, we huddled beneath the gazebos as best we could at break time, and enjoyed a Far East meets South West menu produced by Sally and Jo:  hot Chinese-style soup, French bread, tea, coffee, coconut cake and a pear and cardamom sponge.

Rob also brought along some deliciously chewy chocolate chip biscuits, which we eagerly tucked into, and to finish, everyone snapped open a fortune cookie. 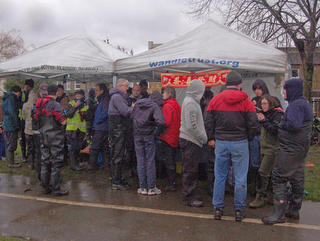 We agreed that the message Ann found in hers should be the motto adopted by cleanup volunteers:  “Little by little does the trick…”

Revitalised by this fine fare, we went back to the next stretch of litter strewn water where we removed 3 lorry tyres and several more shopping trolleys, whilst Rob, Phil and Per wrestled with a municipal park bench… 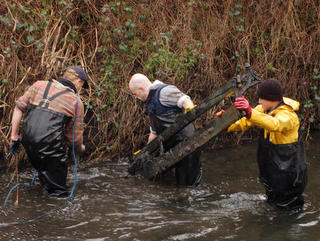 …. and Abi brought glamour to the damp proceedings by wearing a glittery scarf round her neck for warmth, as she wheeled barrow after barrow to the ever increasing rubbish pile: 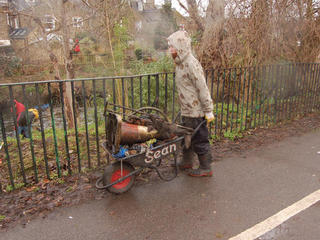 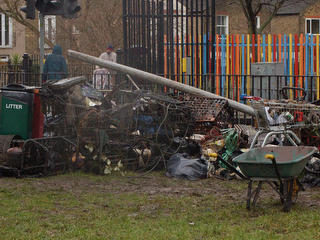 Predictably, just as the rubbish lorry turned up, we found an old moped in the river which was hauled up the bank and manoeuvred through the gate onto a flat bed trolley, for its journey along the cycle path, across the road at the pedestrian lights to the dumpsite situated just inside the railings. 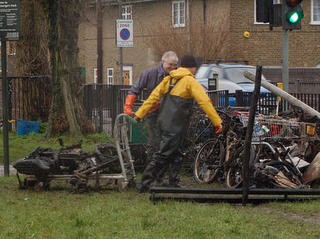 Our thanks as ever to Joanna and Michael from Wandsworth Council who organised the removal of the rubbish and to Terry who turned up early to collect it, for which we were very thankful, as we thought we’d have frostbite in our fingers if we’d stayed until our usual finish time of 3pm.

This filled a 7 tonne lorry which we reckon is about 9 m3 in volume.

And, disappointingly, in this Chinese year of the water snake, our eel tally was: 0!

Kung Hei Fat Choy to all our wonderful volunteers!