The one with the urban ‘trashmob’

February’s cleanup day dawned fine, although there was a keen wind, and the weather pretty much stayed that way for most of the day.  Even though they’d received the news that they would not be able to get into the river because of high water levels, 34 volunteers turned up at Trewint Street to help clear the banks and Trail of litter. 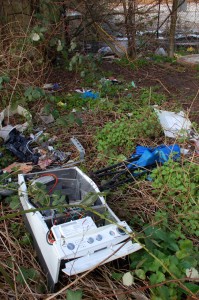 Straightaway, eagle-eyed volunteers spotted the brake handle of what looked like a motorbike in the river.  It had tantalisingly broken the surface of the water just by the metal gates, and, unable to resist a challenge, some of the guys managed to get our ropes tied round the handlebars from the bank and, a couple of heaves later, a newish motor scooter was out and ready to be pushed to the dumpsite. 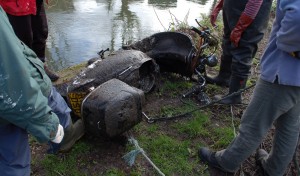 Having spotted that the tax disc was still in date and the number plate intact, another call to the non-emergency 101 number was made, and two police officers turned up to investigate.  They called the owner, who confirmed that he had reported it stolen and that, as he lived locally, he would pop along later to take a look at his former mode of transport.

Meanwhile other volunteers proceeded to remove another fly-tipped load of rubbish from the brambles: 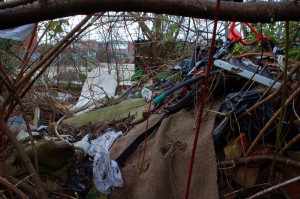 and to collect dozens of empty beer cans discarded along the cut through to Weir Road from the Trail.  Carol discovered that if she pulled her wheelbarrow along behind her the wheel squeaked less than when she pushed it! 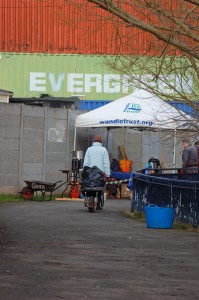 Deep in the undergrowth the long handled litter pickers came in very handy as volunteers could easily get at rubbish tangled in its thorny tendrils. 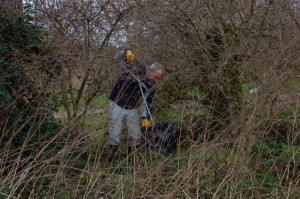 We stopped for a welcome break at about 1pm and enjoyed cheese scones and chocolate marble cake brought by Ann and Jana.  Sally dispensed cups of hot tea and coffee which helped warm us up from the inside out.

After lunch, we walked towards Plough Lane picking up rubbish on both sides of the soon-to-be widened Trail. 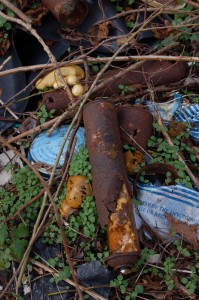 Time flew by and as we wheeled our barrows full of rubbish back to the dumpsite for one last time, we came across Eliot and Leonie, amongst others, who had found a lorry wheel embedded in the grass verge and had, at that stage, managed to dig half of it out.   Very soon afterwards, they had dragged it free of its earthy resting place and Roger rolled it expertly along the concrete to stack it along with others. 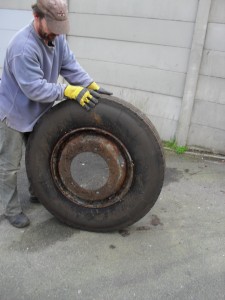 Thanks to Terry who turned up in a cage lorry nice and early so that we could begin to load up the rubbish collected thus far, and to Joanna and Michael at Wandsworth’s waste management department who organised the collection.

Everyone helped load up the lorry and we were amazed to discover that we filled it to the top.  Wally diligently swept the pavement where the rubbish had been stacked, leaving it nice and tidy. 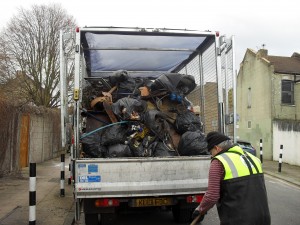 Huge thanks to Gideon and AJ to helped load up the van and to Gideon who helped unload it. 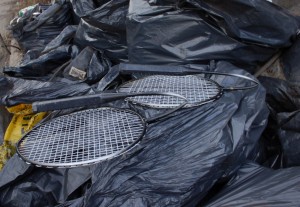