The one with an astonishing 14 shopping trolleys!

It was a remarkably mild day on the second Sunday in January, so much so that 43 volunteers decided to shake off the indulgences of the festive season and help clean up another 50m stretch upstream of Lydden Road.

All sorts of detritus emerged from the water which we could have sworn we’d left rubbish-free 11 months before. Road cones, bike frames and shoes were passed to volunteers on the bank who wheeled the rubbish to the dumpsite. 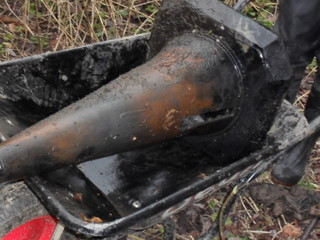 It wasn’t long before the first of 14 shopping trolleys was identified, dug out and hauled from the water.  All were deeply sunk in the river bed, so they’d clearly been there for years, and it took a lot of hard work with crow bars and shovels to release them from the silty depths: 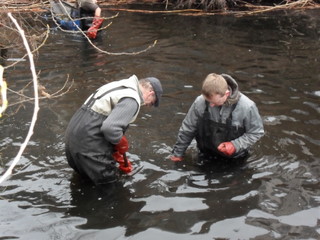 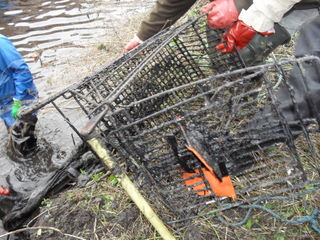 Before we knew it, it was time to take a break and Sally produced a piping hot leek soup and two kinds of cake which everyone enjoyed. Suitably energised, we returned to get to grips with even more shopping trolleys, an oil drum, and the remains of a 1980s hi-fi: 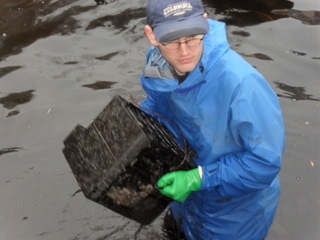 Meanwhile two of our youngest volunteers, Callum and Leo, teamed up and did some litter picking in the undergrowth and had no trouble filling Callum’s own wheelbarrow which he’d brought along especially: 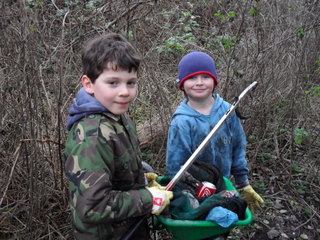 All too soon, Terry and his truck appeared and, having clapped eyes on the huge pile of rubbish,decided we should load up the shopping trolleys first and then put all the rubbish on the top of them.  (Thanks to Sharon and Michael of Wandsworth Council’s Waste Management Team who organised the pick up!) 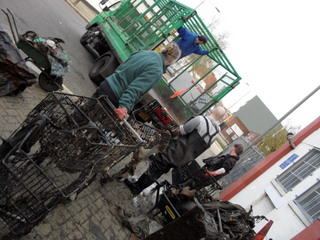 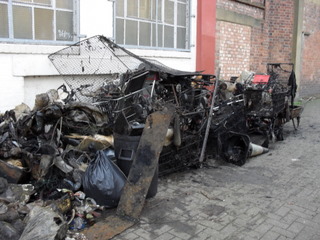 As we were loading up the rubbish two rather surprised eels wriggled out from underneath the pile and were returned, with some difficulty, to the river by Rob and Roger.

Another of our young volunteers, Isabelle, is working her way towards a Duke of Edinburgh Award, and has chosen to come to cleanups as her volunteering activity. She was both in the river and on the bank helping to add to the rubbish pile and wanted her photograph taken on the rubbish truck before it departed.  So of course we were happy to oblige! 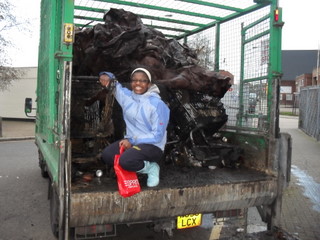 Update: this story has now been picked up and reported by the South London Guardian newspaper group!