The one with the Crime Scene Investigation

On a bright, astonishingly rain-free morning, 37 volunteers gathered at a rather muddy Wandle Meadow to tackle the next 50m upstream of where we had cleaned up just before Christmas. 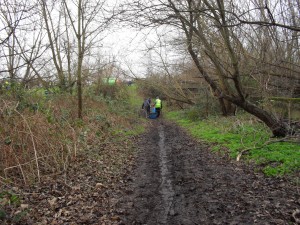 Following weeks of inclement weather, there had been some doubt as to whether our volunteers would be able to get into the river at all as the water level was up and the current stronger.

However, whilst we were unloading the van, Gideon and Theo, already in waders, decided to recce the site and wade the river again, and, on their return to the gazebo, deemed it safe for volunteers to get in, although we reiterated the risks during our regular health and safety briefing, telling them to take extra care.

Fairly early on, whilst picking up litter in the undergrowth, Phil found what he thought looked like a sawn-off shotgun wrapped in two plastic bags. 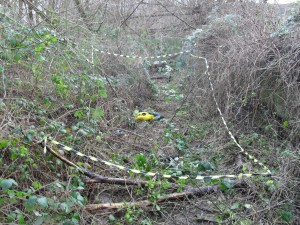 Having cordoned off the area with black and yellow tape, we made a call via the new non-emergency 101 number to the Metropolitan police, and within twenty minutes, 2 police officers arrived.  On closer inspection they decided that they would call the firearms and ballistics department and then remained with the evidence to await their colleague. 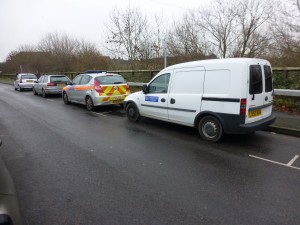 The ballistics officer was well-prepared, dressed in a coverall and Wellington boots and brought all the equipment she needed to transport the firearm offsite safely.  Apparently, when she opened the plastic bags, there was a handgun alongside the shotgun which is why all three officers remained on the bank until nearly 3pm! 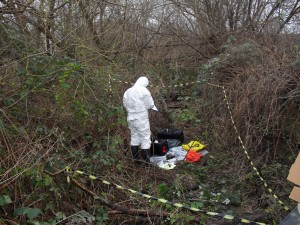 Not long afterwards, Phil found a Webley & Scott flare pistol which Mike pointed out was brass and may have dated from WW1! 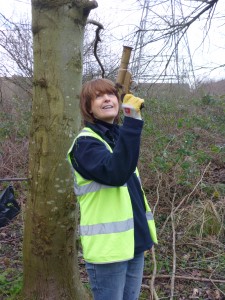 So much excitement certainly gave us an appetite and very soon we stopped for delicious carrot cake and banana bread baked by Jana and Jane, served up with cups of steaming hot coffee and tea by Sally.

Back to work after our break, more usual items were retrieved from the river and the pile began to build on the North Road bridge. 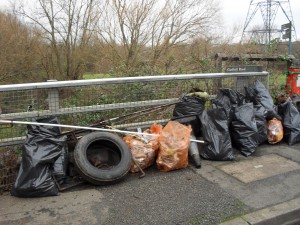 Various passers-by stopped and looked in disbelief at the collection of rubbish, asking whether it had all come out of the water which, we confirmed, it had. 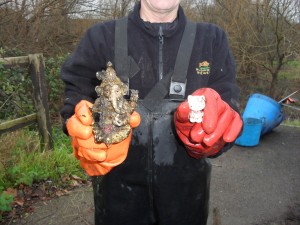 Thanks to Stan who turned up with a cage lorry nice and promptly at 2pm as the skies had started to darken and the temperature to drop, and to Tony at Merton’s waste management division who organised the collection. 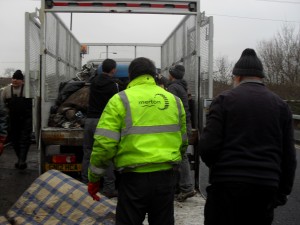 Huge thanks to Gideon and AJ who helped load up and unload the van. 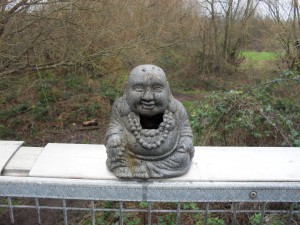