The one with more (but less!) Himalayan balsam than last year

On the second Sunday in July we returned to Richmond Green to see what impact we’d had with our Himalayan balsam pulling last year – and were delighted to see that in many places this prolific, invasive non-native species had not returned!

Impatiens glandulifera is Britain’s tallest growing annual plant, often reaching three metres after being introduced to the UK by John Forbes Royle. As an army doctor in India, he stocked his hospital gardens with many medicinal plants and in 1839 he sent Himalayan balsam to the Horticultural Society of London. Early gardeners initially supposed that Himalayan balsam was a vulnerable plant, so it was consigned to the greenhouse as an annual flower. Of course, seeds escaped through the greenhouse vents to grow in the borders outside, and were found to be perfectly hardy.  A few more pops and hops, and seeds reached the riverbank. Naturalised colonies began to appear by about 1855, and it even made its way into literature in these verses by poet Anne Stevenson!

So with 25 enthusiastic volunteers getting in and amongst the nettles and other bankside vegetation, we started to remove lots more… 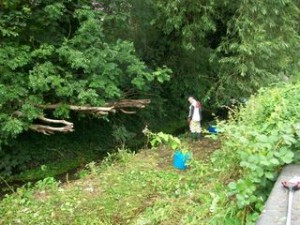 … piling the plants into giant ‘Hippo’ bags and taking them by wheelbarrow to the dumpsite, where Sandra and our friends from the Sutton Council Waste Management Team would collect it later for composting… 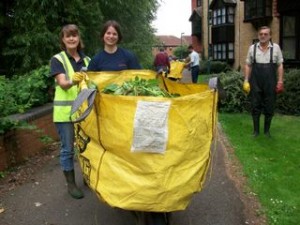 Whilst most volunteers stayed on the bank, others including Mike and Rob waded into the river in order to get at the balsam from the water (and help the EA’s flood risk management by removing all that vegetation from the high flow area of the two-stage channel!) 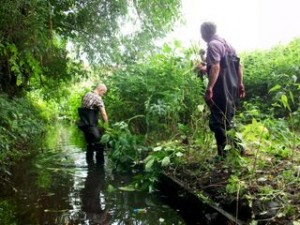 After a relaxing tea and coffee break, with delicious cheese scones and carrot cake produced by Sally and Jo, we were so determined to get all the way down to Guy Road that a dedicated group decided to pull up and remove the final few stands until 4pm, an hour beyond our usual finish time.

And local residents John and Roger even volunteered to keep an eye on the whole area and pull up any more balsam plants which may stick their heads up in the next few months… many thanks indeed! 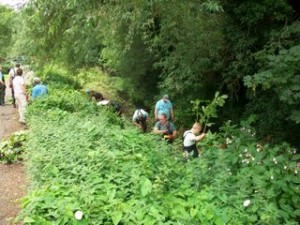 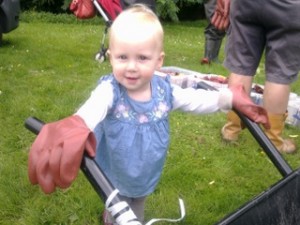 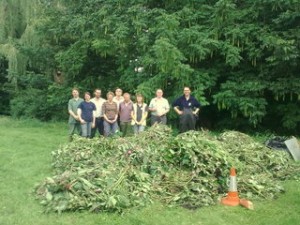 … who removed: a tonne of Himalayan balsam, a road cone, a statuette of Ganesh and one of a brass lion, lots of cans, bottles and crisp packets and of course the inevitable shopping trolley.