The one with the picnic in the rain

With the wettest June on record behind us, we had rather hoped that our July cleanup would be somewhat drier – as 31 volunteers turned out to pull up Himalayan balsam near London Road in Wallington. 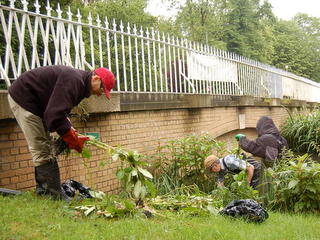 However, it poured down on the Sunday morning, and unlike the Centre Court at Wimbledon, we didn’t have a retractable roof to take shelter under. As a result, the weather caused a slight delay to the start of proceedings as Andy donned waders ahead of the others to test the first fifty metres of river.

Although the water was rather murky, we decided our volunteers could go in, but advised caution during the Health and Safety briefing, asking them to be aware of slightly stronger currents. 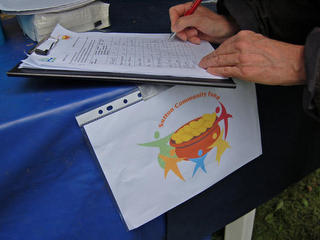 With the old adage “there’s no such thing as bad weather, just inappropriate clothing” ringing in our ears, we took our half barrels to the river and began to clear this non native, invasive plant species: 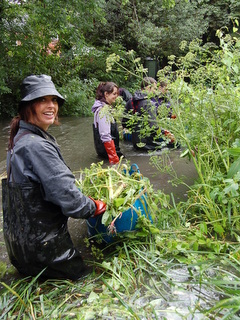 Some larger stands were easy to remove, although other smaller stems had to be ‘weeded out’ from in amongst the nettles: 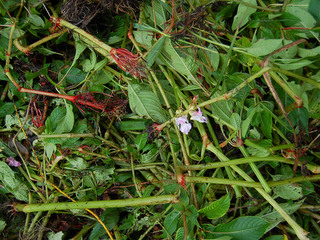 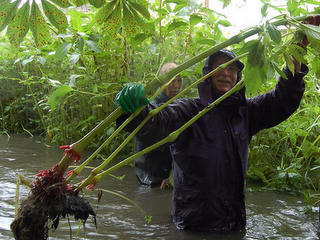 Those in the water without a floating trug put the stems onto the bank where it was collected and wheeled back to the car park to make rather an impressive pile: 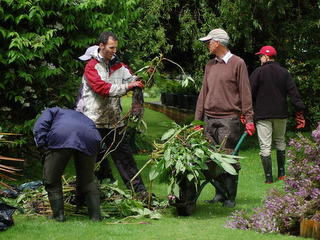 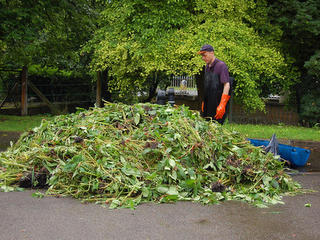 With the flora of the Wandle at the forefront of our minds, we couldn’t help but notice this buddleia… 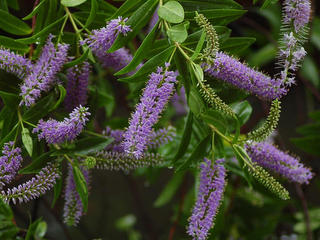 … and admire a clump of rather beautiful Arum lilies: 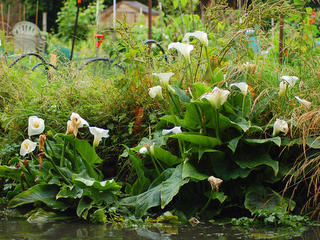 Instead of having our usual break, we worked on through to about 1.30pm when we went back to the gazebos for a feast.  Egg and bacon pie, along with a veggie version, potato salad and homemade olive bread was on the menu for starters – and in keeping with the Wimbledon theme, there were strawberries and cream for pudding although we had chocolate brownies with ours! 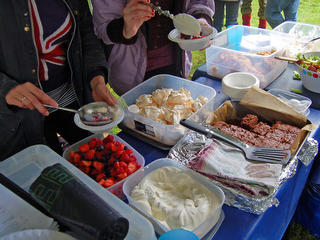 These were some of the culinary goodies brought by Sally and Jo to our annual picnic, which is our way of saying thank you to all our wonderful volunteers – without whom none of the rubbish clearing or Himalayan balsam pulling would be possible.

Amongst our volunteers on the day was Derek Coleman, who, along with co-author Bob Steel, has written the new River Wandle Companion and Wandle Trail Guide.  (More copies will also be available from the authors at future cleanups, so don’t worry if you missed this one!)

At the risk of indigestion en masse, we quickly packed everything away in order to race home and settle ourselves in front of our respective televisions to watch (another) Andy attempt to win a grand slam final…

For another angle on the day, and lots more photographs, read Mark’s account here. And we’re grateful as always to David of Sutton Council’s Waste Management Team who arranged collection of the pile of Himalayan balsam.

A tonne or so of Himalayan balsam, and because of poor visibility, a couple of bin bags of light litter including some empty cans, bottles, sweet wrappers and a hub cap.

This event was supported by the Sutton Community Fund