The one with the wedding wheelbarrow and the stolen cabling

It seems that even the Western European Monsoon couldn’t put off 32 of our hardiest volunteers who arrived at to our June cleanup near Garfield Road Recreation Ground!

We were especially delighted to welcome back newlyweds Hannah and Sean who had been given a wheelbarrow for Wandle cleanups as a wedding present by friends (and fellow volunteers!) Debbie and Bart.  The bridal ribbon stayed on the wheelbarrow pushed by our hardworking couple… 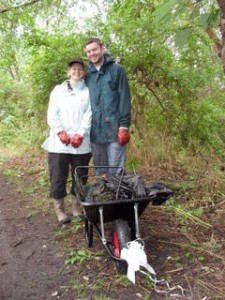 …right until the end of the cleanup, when the bridal party posed for a rather more unusual group photograph! 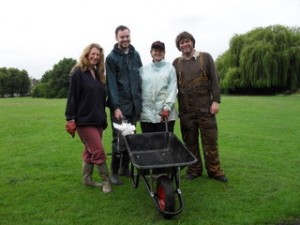 Starting at the footbridge over the river located behind the Recreation Ground, it wasn’t long before someone pulled out a security box from the water.  This was followed swiftly by metre after metre of orange cable cover carefully stripped of its copper contents by unknown criminal elements and dumped into the river.  Bart and Neil did a sterling job getting it out of the water… 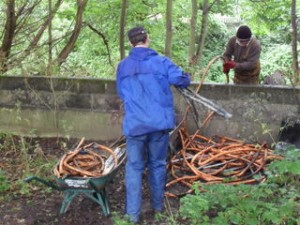 … and Toby and many others made endless trips with loaded wheelbarrows to the dump site: 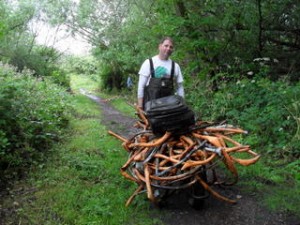 Meanwhile, Jack, our youngest volunteer that day, was very enthusiastic about helping out at his first cleanup.  Soon, he was as waterlogged on the inside of his waders as he was on the outside, so his father, Hugh, scooped him up and took his bedraggled son home:

Stopping half way through for very welcome hot coffee, tea, cheese scones and marshmallow raspberry squares made by Sally and Jo, we were joined temporarily by Nelson the cocker spaniel, who, like his namesake over two hundred years ago, was enjoying a walk by the Wandle! 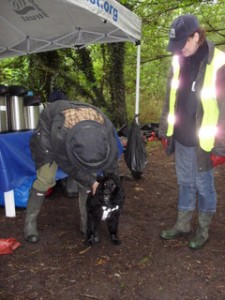 After refreshments, we went down towards the railway bridge and worked upstream.  One of the first finds on this site was a motor scooter, which we managed to get onto a small flatbed trolley and get to the dump site by negotiating a muddy slope and a couple of fallen willow branches which had to be lifted up to allow the trolley to pass underneath. 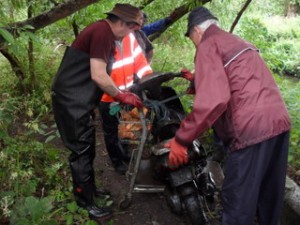 Towards the end of the afternoon, someone also found an illegal eel net or crayfish trap. Eel nets have to be licensed by the Environment Agency in a similar way that anglers need to licence their fishing rods and, if legal, should have a numbered tag on it to allow identification.  This one had trapped lots of other small bits of rubbish, as well as an eel which we managed to set free and return to the river. 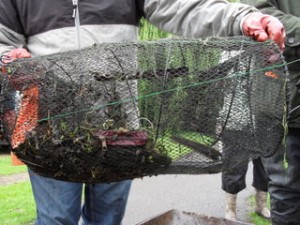 At precisely 2.30pm, Stan from Merton Council came and everyone helped load up his truck. And then there was just time for a team photo before everyone squelched their way home! 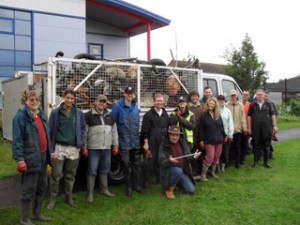 … and rescued and returned 1 eel to the river!