The one with all the rain

I have now been running cleanups for almost two years and I was getting pretty proud of my track record of providing sunshine for everyone. But I failed at this June cleanup. Really failed.

The weather leading up to this cleanup had been very stormy, with thunder and lightning. The morning of the cleanup was drizzling rain – the deceptive sort of rain where you are unaware of just how wet you are getting. But thankfully, I wasn’t alone. A small group of volunteers showed up to power through the rain!

We were at Trewint Street for this cleanup, funded through the Living Wandle Landscape Partnership, a HLF funded scheme all about reconnecting people with the River Wandle. After the usual Health & Safety briefing we climbed down to the Wandle and started pulling out the rubbish which had collected from fly tipping, but also washed down from upstream in the recent heavy flows. 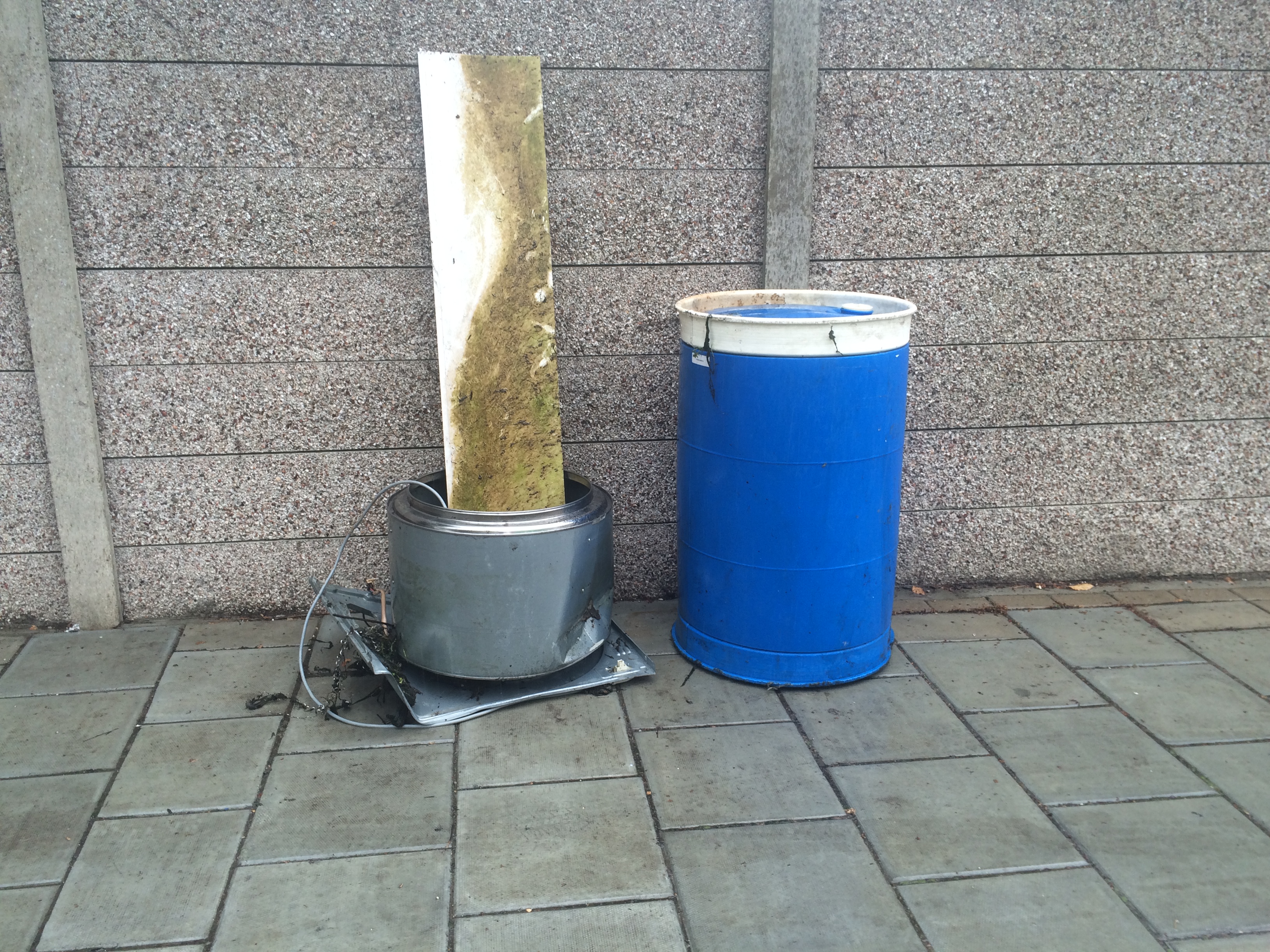 Even though we were a small group, the rubbish was being dragged up the concrete banks with impressive speed. We found a bicycle, the old railings from the path (preventing access for motorbikes), a barrel and the drum of a washing machine. 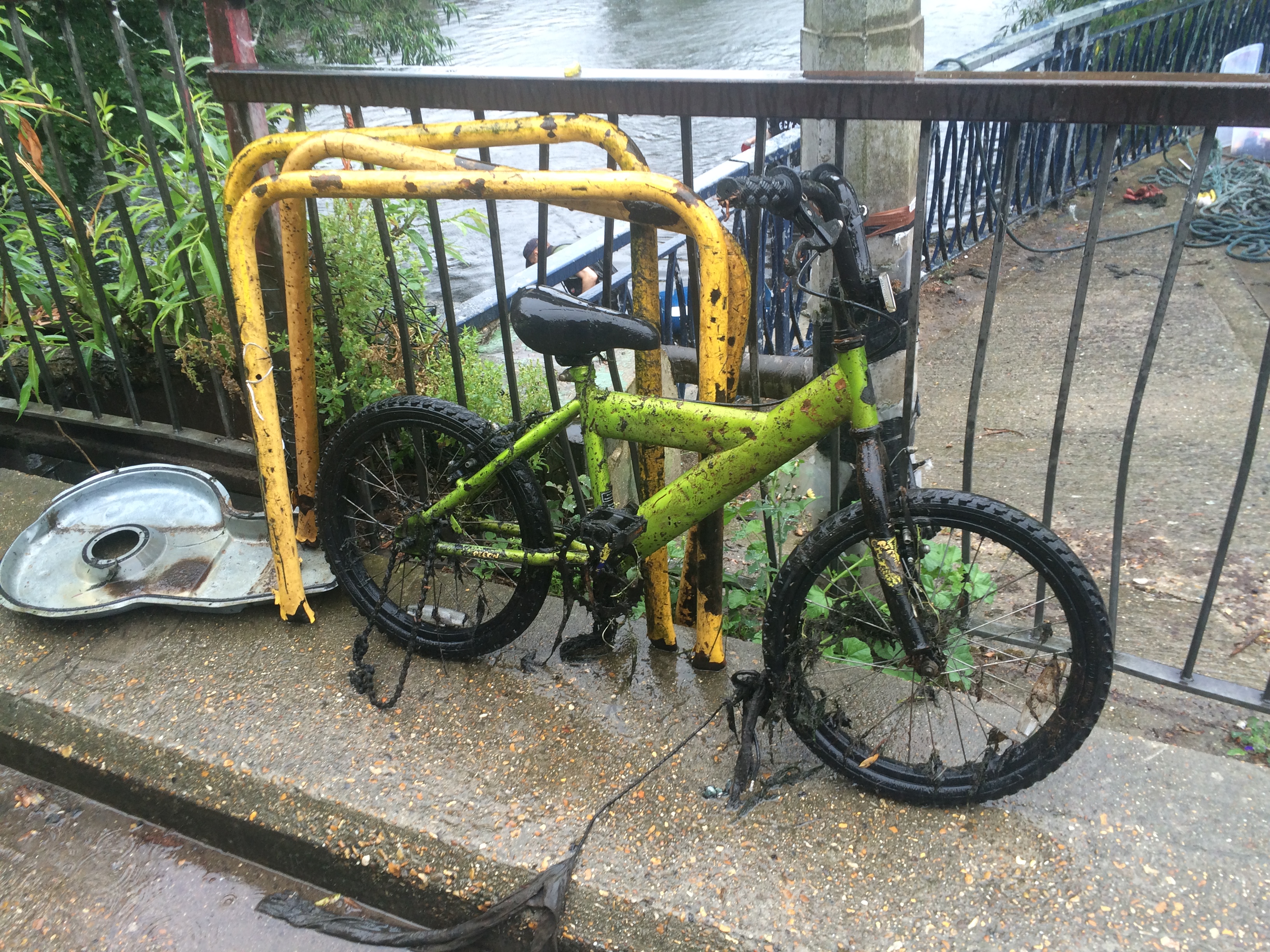 And if that wasn’t challenge enough, we even found a mattress which took everyone to heave it up over the concrete banks and round to the ever growing rubbish pile. 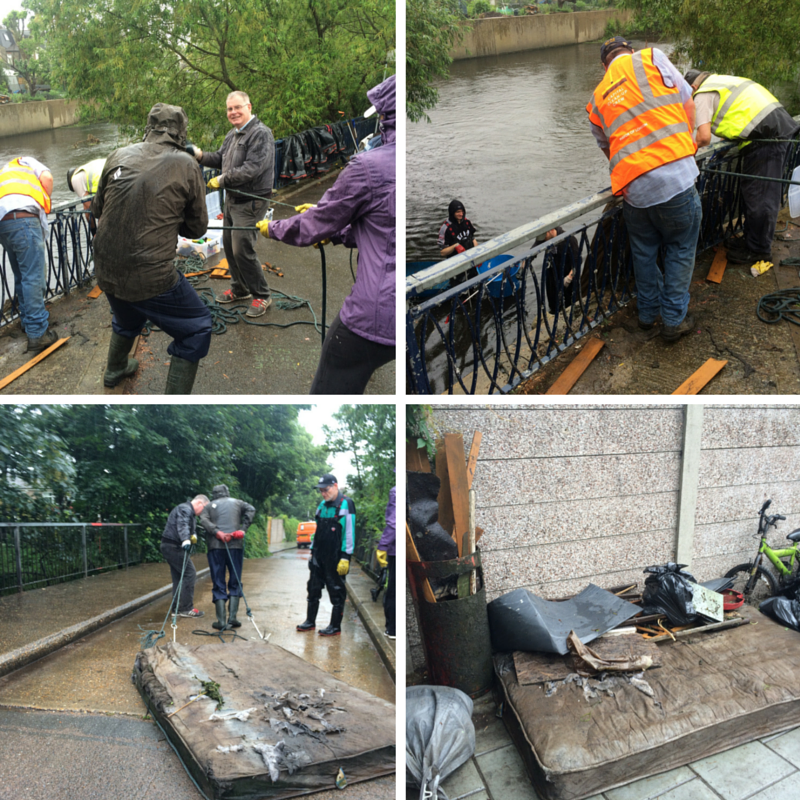 As the rain came down, I made use of the tent sides, which I was very thankful I’d decided to pack last minute – quite a squeeze for our little Zipvan. 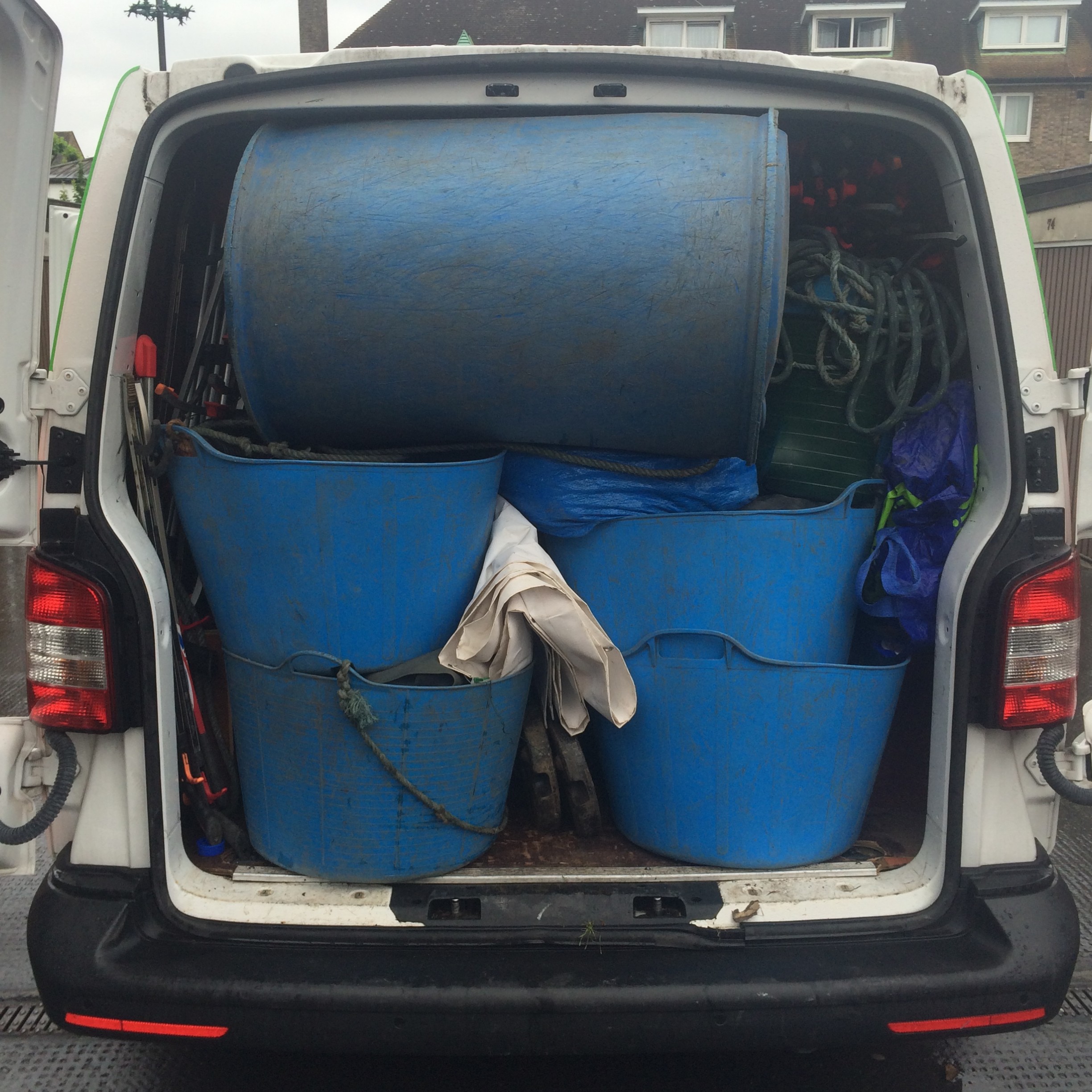 Instead of the usual litter picking, our other volunteers tackled a large stand of Himalayan balsam on the bank at Trewint Street. The stand was very dense and had grown very tall, but was yet to flower. Therefore by pulling it up now, we would be preventing it from seeding and making our job easier in the future when we make it down this far with our Invasive Species Officer. 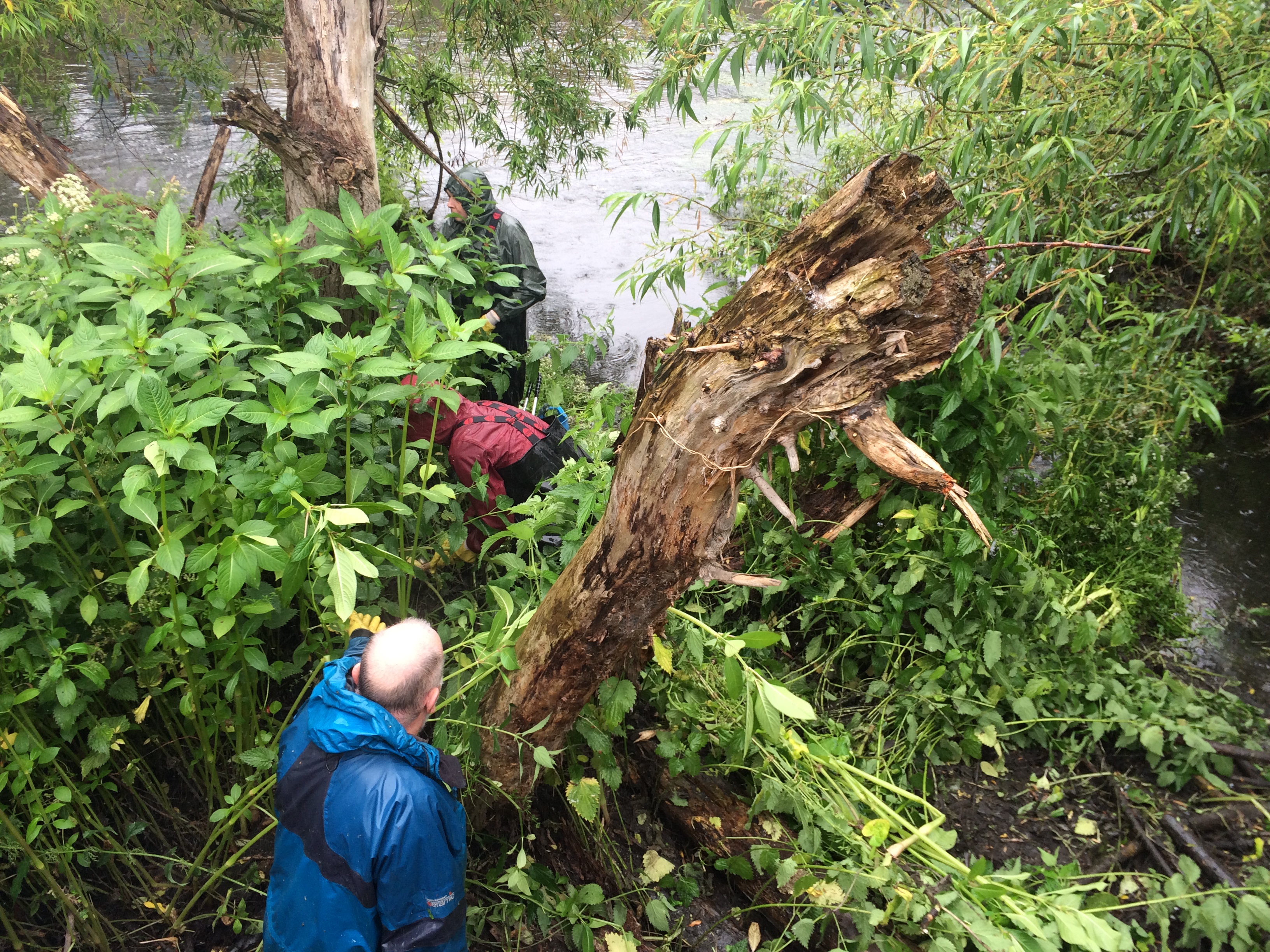 By lunchtime we were all pretty soaked, so we huddled under the tent to warm up with a cup of tea and some cake kindly made for us by Ann. Given the rain and our sodden coats, we decided to be democratic and take a vote on whether to keep cleaning, or to finish early and head home for warm showers.

I am sure you can guess which won… 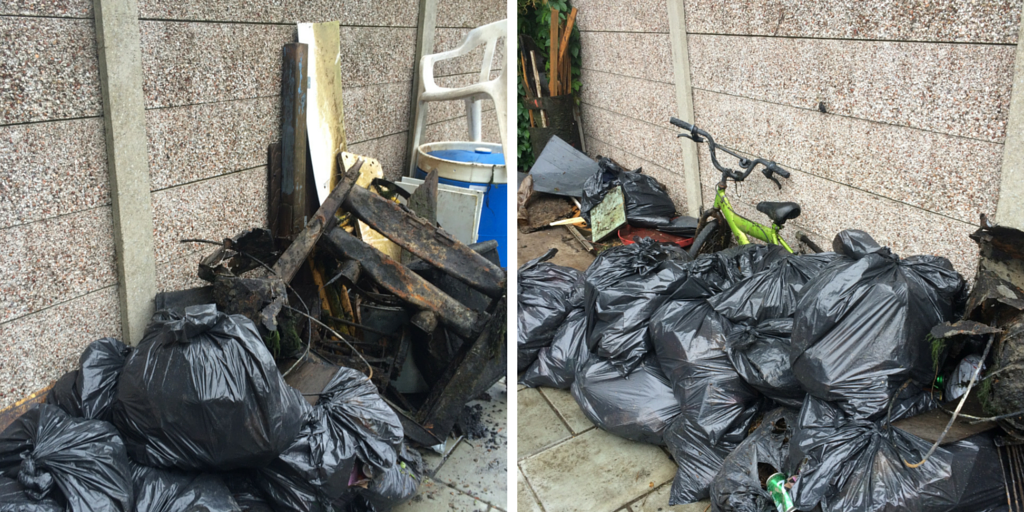 Huge thanks to the Living Wandle Landscape Partnership for funding the event as part of the River Guardians projects, everyone who helped unpack and pack up the van during the event, Rosie for supervising the Event Tent, Wally for helping supervise the cleanup, and the Waste Team at Wandsworth Council for organising collection of all the rubbish the next day.

So what did I learn from this month’s cleanup?   That as much as I might think it, I cannot control the weather with the power of my mind. Time to work on the weather machine…