The one with lots going on!

The temperature didn’t rise much for our March cleanup with the wind adding several degrees of chill factor to the bare 4 degrees registering on the van’s gauge.  However, undeterred, 60 volunteers turned up to tackle the long haul upstream of the Lydden Road bridge to the one at Foster’s Way. 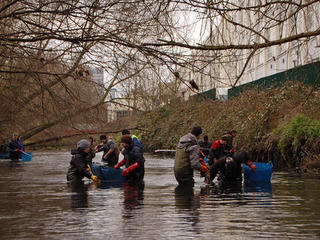 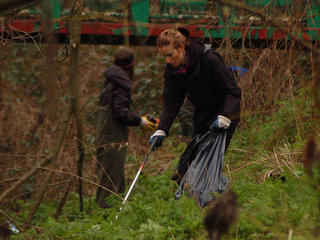 … lots of rubbish came out of the water, which amazed those of us who had been at the same location in June last year, when several more tonnes of rubbish had been removed. 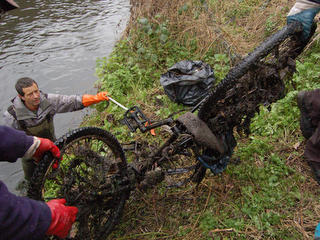 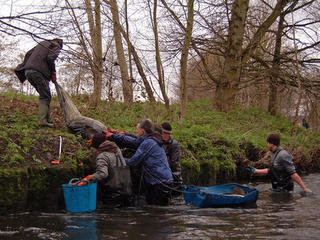 Joining us for the day were Rosie and Jess from the Brick Box arts company, who have been asked to put together an arts project in Wandsworth for the Wandsworth Arts Festival and Fringe. They’re planning to stage a ‘Cabinet of Curiosities’ on the triangle of land opposite the Ram Brewery site on Wandsworth High Street, and picked out various items of rubbish they thought would make an interesting display. There was much panic at one point, as Terry from Wandsworth’s waste management team turned up early, and merrily loaded all their ‘pieces’ onto his truck, so that Rosie and Jess had to run and rescue them!

Other visitors included Mark, Friederike, Nicky and Caroline from Project Dirt who interviewed Bella, Andy and me about cleanups, the work of the Wandle Trust including past and future funding projects, capturing us, cold noses and all, on video. 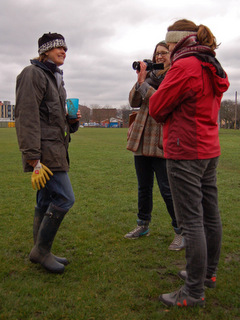 Before we knew it, it was one o’clock and Sally and Jo treated us to mugs of hot tomato and rice soup, French bread, tea, coffee, a large chocolate sponge and even a Simnel cake to mark the forthcoming Easter weekend. There was also a beautiful bunch of spring flowers and a Mother’s Day card on the table, to remind us all of mothers everywhere. 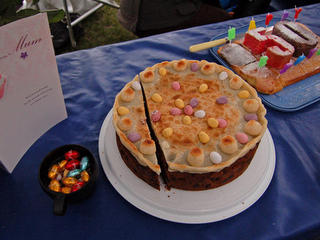 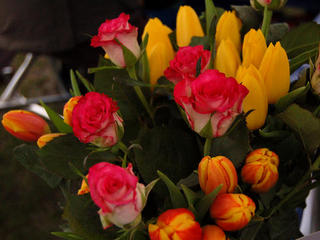 Unbeknown to Jo, who was celebrating a milestone birthday later in the month, Sally had baked a special Victoria sponge and put candles on it!  She also put birthday balloons around the gazebo for added decoration. 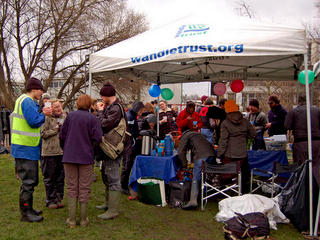 Break time was also our opportunity to present dedicated volunteer and stalwart of nearly 60 cleanups, Andy B, with a couple of presents, which we hoped would remind him of us as he ventures overseas for a couple of years, and was our way of saying a huge thank you to him for all his hard work in making the cleanups the success they are today. 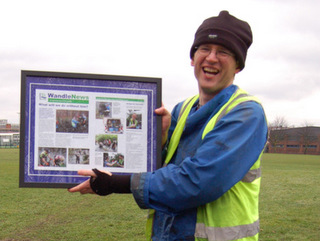 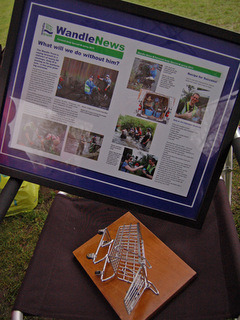 Back we went to the river after coffee where, as volunteers dug around in the water for rubbish, we wondered if we’d actually found a body in the Wandle for the first time? 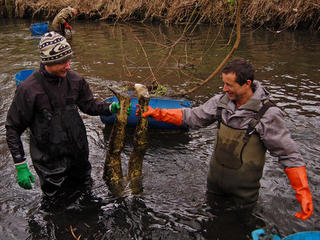 Fortunately, the ‘legs’ turned out to be those of half a mannequin but there was much giggling as they were barrowed away to the rubbish heap!

As ever, with ten minutes to go, Robin and Rory thought they had found a washing machine. After several cheery remarks from them about spin cycles, it turned out to be a fridge.  Still, it took much hauling from them to an accessible piece of bank, where land based volunteers took over and dragged it up out of the water and wheeled it to the rubbish truck. 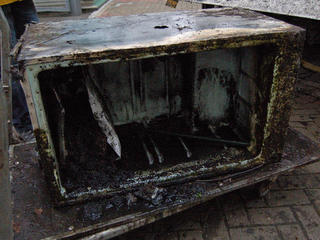 Finally, at the end of the cleanup there were forms to sign for Arthur, Ben and Jacques, three young men taking part in the Duke of Edinburgh Award Scheme.

Having consigned another broken wheelbarrow to the rubbish pile, Jo kindly agreed to donate one in its place to mark her special birthday. This, she promised, would be emblazoned with her native New Zealand flag and a Kiwi!

Our thanks as ever to Joanna and Michael from Wandsworth Council who organised the removal of the rubbish, and to Terry who collected it. And check out our volunteer Mark’s Gullible’s Travels blog about the cleanup too!

Other species: 1 bullhead in a Tesco bag