The one with the gun and the coracle

On the second Sunday of May, under the railway bridge with South West trains to and from Earlsfield station continuously rumbling overhead, 50 volunteers cleaned up another 100-metre stretch of the Wandle.  The water was a bit murky after rain overnight, but that didn’t stop us removing a couple of tonnes of rubbish from the river. 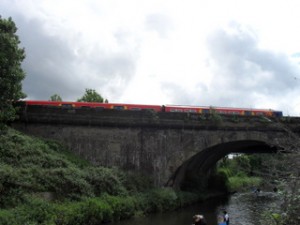 The usual detritus including a bicycle, tyres and carpets had to be carried, hauled and dragged along a narrow bank and then heaved up and through an even narrower space to the dump site.  In addition to a chair, a radiator and two duvets, Lucy found a rifle she entrusted to Bella to put on the rubbish pile! 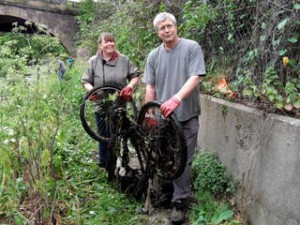 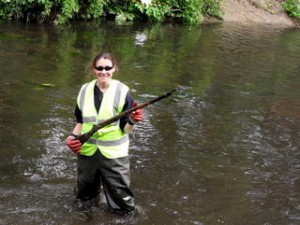 Up by the island, Andy had already had his eye on a safe for about a year, and because the water level was quite low on Sunday, he and Hugh rolled it in the water in order to get it to the bank where they, and others, lifted it out and managed to put it onto a flatbed Homebase trolley pulled out earlier by Launa and Antoine: 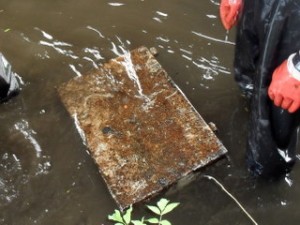 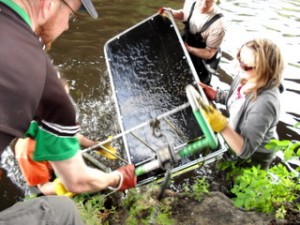 Halfway through we stopped for refreshments – tea, coffee, greek yoghurt and honey cake and oaty biscuits. Briefly because of the wind, we also managed to put two candles onto the carrot cake to celebrate the birthdays of two of our volunteers: Henry and Sally Ann!  The gazebo was looking suitably patriotic and had been festooned with union flag bunting to celebrate VE Day: 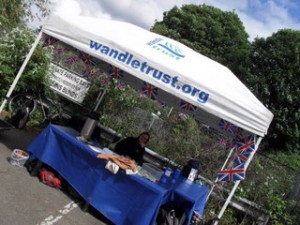 During  the morning, trustee and volunteer Jane Porter launched Noggin, a coracle that she and her son Tom had made of cow hide – complete with tail – stretched over willow sticks and covered in lanolin, during a coracle building weekend: 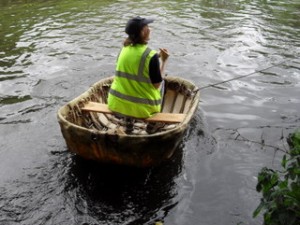 Jane hopped in and expertly mastered the special figure of eight strokes needed to paddle up the river although, for safety’s sake on this occasion, someone on the bank was holding onto a rope tied to the seat.  And for posterity, Jane’s father came down with his camera to take a few snaps of Noggin’s maiden voyage.

Mindful of our pledge to keep an ongoing eel tally, someone found one which was dead (sadly) however the other one was alive and living in an old kettle: 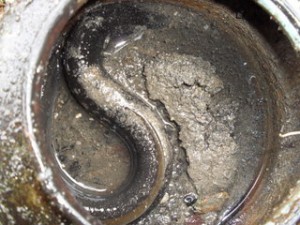 Bang on time, Terry from Wandsworth Council’s waste management team arrived with a 7 tonne truck and everyone helped load up. Our thanks, as ever, to Joanna and Michael for arranging collection. 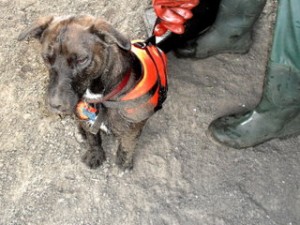 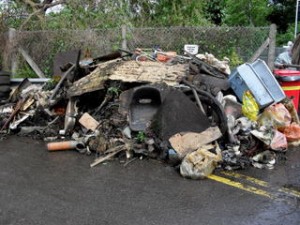