The one with the wobbly table leg

Spring had finally sprung as 62 volunteers turned up to tackle the next 50m upstream from a heavily littered stretch adjacent to Weir Road that we had visited in January. In the intervening months, our surroundings had been transformed by all the new greenery on the trees and bankside vegetation!

We were delighted to welcome visitors from the Wandle Valley Forum and the Wandsworth Society for the first time, and they, along with other land based volunteers, got down to some very worthwhile litter picking along the Trail.

Having spotted a burnt-out motor scooter in the undergrowth on the way down towards Trewint Street, a small ‘hit squad’ of volunteers trundled the flat bed trolley along the Trail in order to pick it up and wheel it back to the dumpsite: 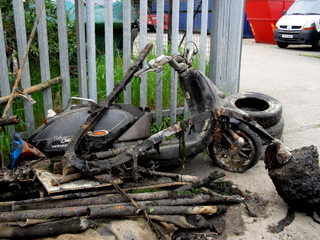 In the meantime, Daniel, his Mum, and Tim H scrambled up a steep bank to discover some dumped and burnt-out water cooler bottles… 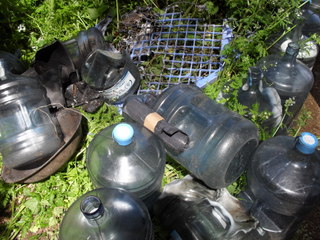 … and carried four at a time back to the dumpsite.  Daniel salvaged a couple of less damaged ones as, apparently, once the tops are cut off, they make good cloches for the garden!

Meanwhile, Claire, Peter and Gideon used a couple of crowbars to try and dislodge a shopping trolley that was firmly embedded in the silt: 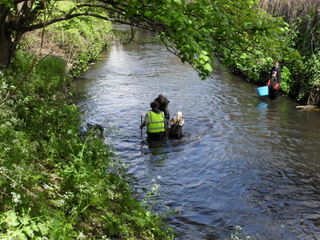 Slowly but surely, the small rubbish pile began to grown as more and more items were barrowed, carried and dragged to it, and it looked satisfyingly large when we broke for lunch: 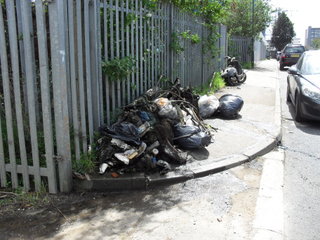 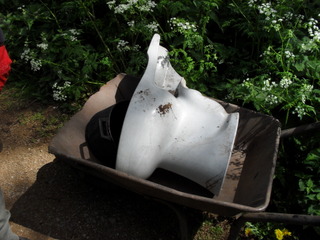 Even though the table bearing the edible goodies Sally and Jo had produced toppled over, much to everyone’s relief, disaster was averted and the cakes were salvaged!  Rob brought along a delicious quiche to share too and, suffice it to say, there were only a few crumbs left at the end, which made for very easy washing up.

Whilst we were taking a break, copies of our new Wandle Vision document, complete with illustrations by our very own Jane Porter, were handed out by Bella and Claire.

Back in the river after lunch, and because he was standing in a stretch of water he knew had been searched three months earlier, Per looked a little surprised to find another motor scooter, but with the assistance of three big, strong boys, it was manhandled to the water’s edge, where ropes and grapples were tied to it in order to haul it up the bank: 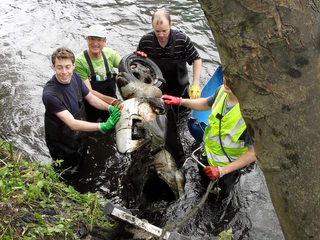 Tim L was overseeing proceedings, and had to hang on to a tree because the angle of the bank was quite steep: 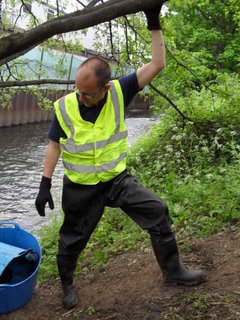 Finally, as the mid-afternoon clouds gathered, Stan appeared with his grab lorry in order to remove all the rubbish we’d pulled out, making light work of picking up one of the motor scooters and lowering it gently into the back: 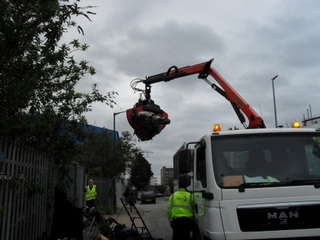 Thanks to Henry who turned up with a very shiny new wheelbarrow to donate to us, and, again, to our amazement, we managed to get it into the van for the trip back to the garage.  We’re very grateful to Michael and John who helped load up and unload the van.

Our thanks also go to Danny from Merton Council who came and opened the gate at short notice, after we realised that the padlock had been changed since our visit in January, and to Tony and Stan from the waste management team for the organisation and collection of the rubbish pile. 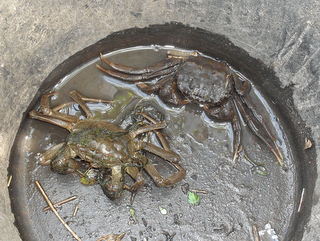